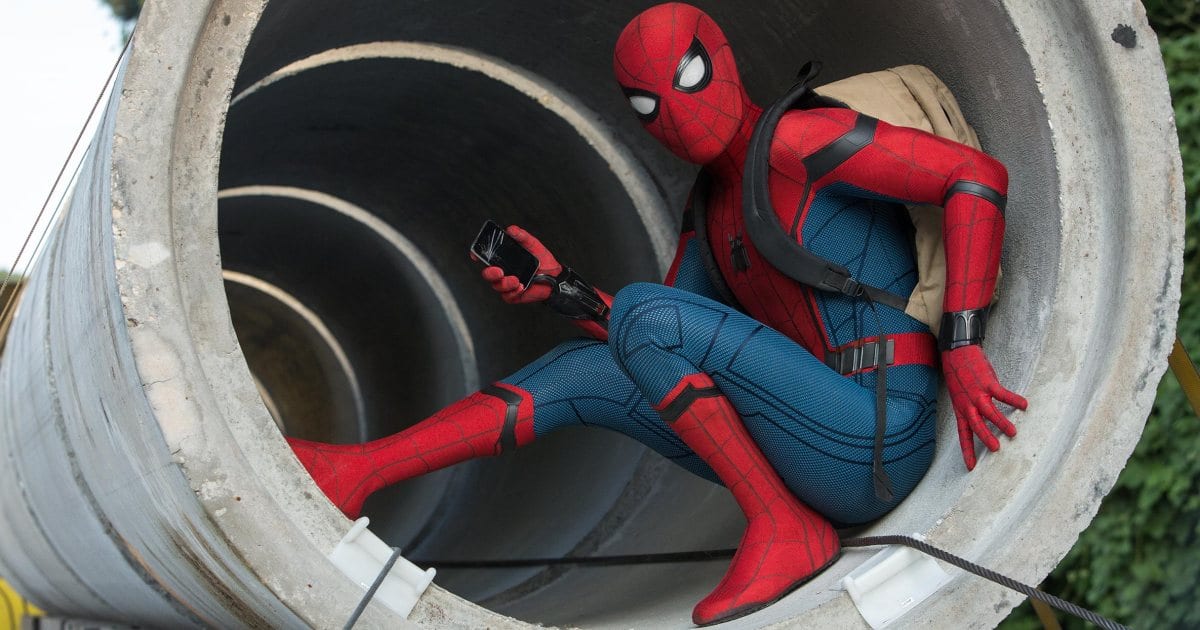 The Marvel Cinematic Universe continues to grow in size with the second installment of 2017 about to be released in theaters.  The next film, Spider-Man: Homecoming, takes the MCU into new territory with a focus on the popular webslinger.  There’s no doubt that the film will rake in a ton of money at the box office, but is it a worthwhile reboot?  The following review will be spoiler free.

After the events of Captain America: Civil War, Peter Parker (Holland) is attempting to juggle his personal life that involves high school, homework, and girls with his newfound celebrity as the masked webslinger, Spider-Man.  Although he tries to get back to his old routine, he just can’t shake his experience as a true superhero.  With his new mentor, Tony Stark (Downey Jr.), by his side telling him to be careful, Peter tries to break out of his shell and be more than your friendly neighborhood Spider-Man. As has been well documented, Spider-Man: Homecoming is a co-production between Marvel and Sony.  The aftershocks of the hacks on Sony had a massive effect on the company, forcing it to make some difficult financial decisions.  With the disappointing The Amazing Spider-Man 2 coming around a similar time, it created a perfect opportunity for Marvel to swoop in and add Spider-Man to the MCU.

Although Sony still had final say on the film, the two companies appeared to work fantastic together as all reports pointed towards a great production with limited issues.  In fact, the two studios appeared to work so well together that earlier this week Kevin Feige announced that Spider-Man: Homecoming was part of a five movie arc for the Spider-Man character.

Who knows, maybe a great opening weekend at the box office for the film would cause a chain reaction of cooperation between studios with comic book properties.  After all, Hollywood is an industry built on trends. However, Amy Pascal, the executive over at Sony, made recent comments that threaten to muddle the continuity of the MCU with discussion of the Sony produced Venom movie possibly including Tom Holland’s Spider-Man.

Will it all work out?  Who knows, but we’ll cross that bridge when we come to it.

Each character pertinent to the main story is fleshed out to an exceptional degree.

In all the Spider-Man movies we’ve gotten so far, there’s never been a version of the character that has made the high school element of the film believable.  Luckily, Tom Holland’s baby face is here for the rescue.  This kid is an absolute star.  Get ready to see him in just about every movie from here on out.  He’s hilarious, charming, and super charismatic.  He’s the engine that makes this movie run.

Holland’s best friend in the film, played by Jacob Batalon, adds some serious comedic chops to the film.  In a time where we see movies shove the comedic sidekick down our throats, it’s incredibly refreshing to see a character that organically fits into the story while also being laugh out loud funny.  There’s a lot of down time between action sequences in this film.  However, Batalon and Holland’s rapport make the film wholly entertaining and rewatchable.

Suprisingly enough, Marvel has created a worthwhile villain with Michael Keaton’s Vulture.  There still isn’t a lot of time devoted to his character, but he has motives that work.  You understand why he’s evil and why he’s doing what he’s doing.  There isn’t a moment where he freaks or raises his voice.  But, Michael Keaton adds such a presence to the role that you are immediately intimidated by him.

Robert Downey Jr. continues to be likable as Tony Stark/Iron Man.  From the trailers, it appeared that the film may try to turn Spider-Man: Homecoming into another Iron Man movie.  Luckily, Downey Jr. has a glorified cameo.  He has massive effect on Peter Parker but stays to the sideline enough to allow Spider-Man to shine.

The best quality of Spider-Man: Homecoming, however, may be how it captures high school.  Peter Parker has problems that every person dealt with during those awkward teen years.  He has problems with girls, classes, driving, parties, you name it.  While there’s certainly a heightened feel to it, there’s something super relatable to behold here.

Amidst fighting baddies with crazy weaponry and trying to impress Tony Stark to join the Avengers, Peter has to juggle the issues that come with everyday life.  He even has to go on a trip for the academic decathalon!

Although he wants to fight alongside the Avengers, he’s still a kid.  A lot of credit needs to go to Jon Watts for perfectly capturing Peter Parker’s innocence.  It adds a completely fresh layer to the film in a genre that needs to continue to reinvent itself. The mark of a great superhero movie is one where the action sequences are secondary to the characters and relationships.  Spider-Man: Homecoming has that quality.

Is the movie perfect?  Absolutely not.  There’s some moments of wonky CGI where Spider-Man leaps from web to web and an outlandishly terrible green screen moment including Robert Downey Jr. that take you out of scenes.

Also, and this may seem like a nitpick to some, but movies that contain a character with a secret identity all too often make nods to that fact that are horribly on the nose.  Spider-Man: Homecoming has similar issues.  Do I need bits of dialogue where characters exclaim that Peter is hiding something only to make a joke about that claim’s insignificance?  They’re certainly fun in small doses, but Homecoming overstays its welcome in this department.

But let’s be honest, if those nitpicks are my biggest gripes with the film, it’s obvious that Spider-Man: Homecoming is a damn good film.  There are other flaws in the film that relate to underdeveloped characters and world building, but that can’t replace the fact that Spider-Man: Homecoming is a fun-filled joyride.  This movie is everything that a blockbuster should be.  It’s big, it’s hilarious, it’s a blast. 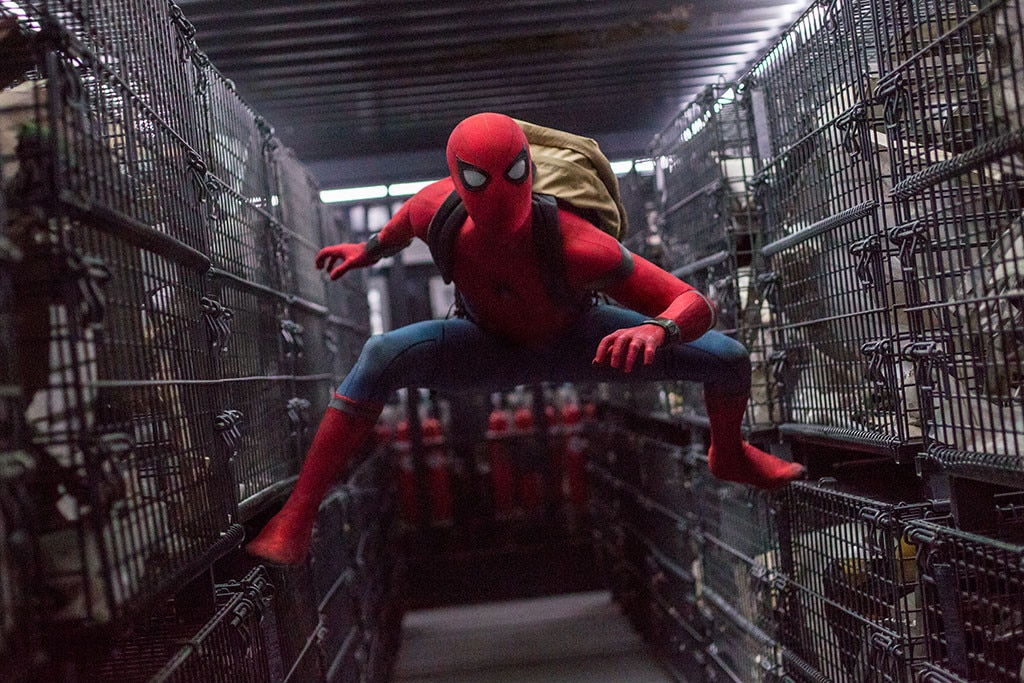 Spider-Man: Homecoming is everything a popcorn movie should be.  It has heart, laughs, and a whole lot of fun.  It doesn’t take itself too seriously but still has enough dramatic moments to ground the story.  Spider-Man: Homecoming, you get an A-.  For all you Marvel fans out there, it rewards you for having stayed with the MCU since 2008 by giving nods back to older films without becoming overbearing.

There are flaws here, but nothing truly matches the boyish giddiness that I felt watching this movie.  In the end, isn’t that what watching movies is about?

As a note, the film has two end credt scenes.  Make sure to stay for both!

Thanks for reading!  What are your thoughts on Spider-Man Homecoming?  Comment down below with your thoughts!

I saw the movie last week and I have to say it is my favorite Spider-Man movie. I did enjoy the whole cast, especially Michael Keaton he did an awesome job.

I think it’s my favorite too! For some reason I just can’t quite love the Tobey Maguire films.

MovieBabble. I nominated you for The One Lovely Blog Award

I’ve been wanting to see this movie since the promos, then seeing him and Zendaya on Lip Sync Battle solidified it for me. Thank you for this through review I will head to the theatre Saturday :)! I look forward to your future recommendations.

Thanks so much! I’m so glad I could help you out!

I liked everything about this film except Zendaya as MJ, they turned MJ into a moody SJW who adds nothing of worth to the film except to claim diversity and take a couple shots at Washington. Otherwise the movie was highly entertaining.

I’ve heard that sentiment from a few people. But honestly, I wasn’t very bothered by it. I actually thought it was pretty amusing. I assume she’ll probably lessen her tougher exterior as future movies progress and she warms up to Peter.