5 Reasons Why Tom Cruise is the Craziest Actor in Hollywood 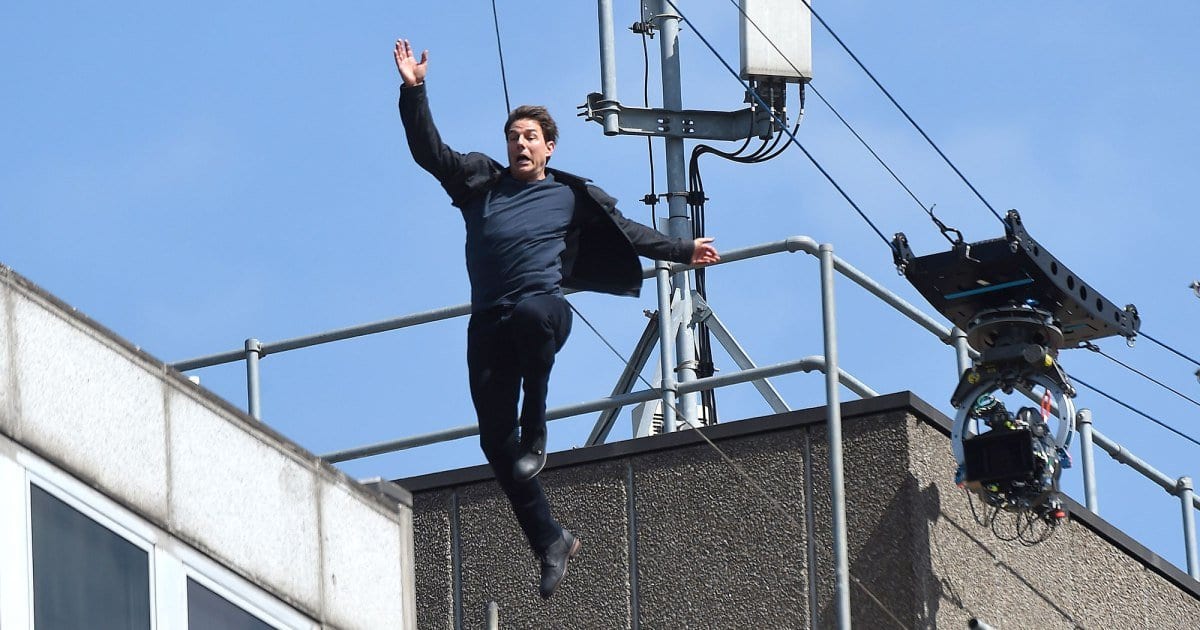 We are just over a week away from the release of the sixth installment of the Mission: Impossible franchise. It is mind-blowing to me that this series has survived this long. Like a fine wine, Tom Cruise’s MI movies seem to keep getting better as he ages. After three movies that I considered to be watchable at best and overkill at worst, Ghost Protocol was released in 2011 and blew my (admittedly low) expectations out of the water. As I awaited the release of Rogue Nation in 2015, I was still a bit skeptical that Tom Cruise would be able to catch lightning in a bottle again, this time at age 53. Thanks in part to a great performance by Rebecca Ferguson, Rogue Nation once again upped the ante and became my favorite movie of the series.

Just what is it that makes Mission: Impossible movies so fun to watch? I think it is because Tom Cruise is the craziest actor in Hollywood and he is willing to go the extra mile to make his stunts the best in the business. Here are five examples of Tom Cruise doing something crazy so that we could all watch and enjoy. 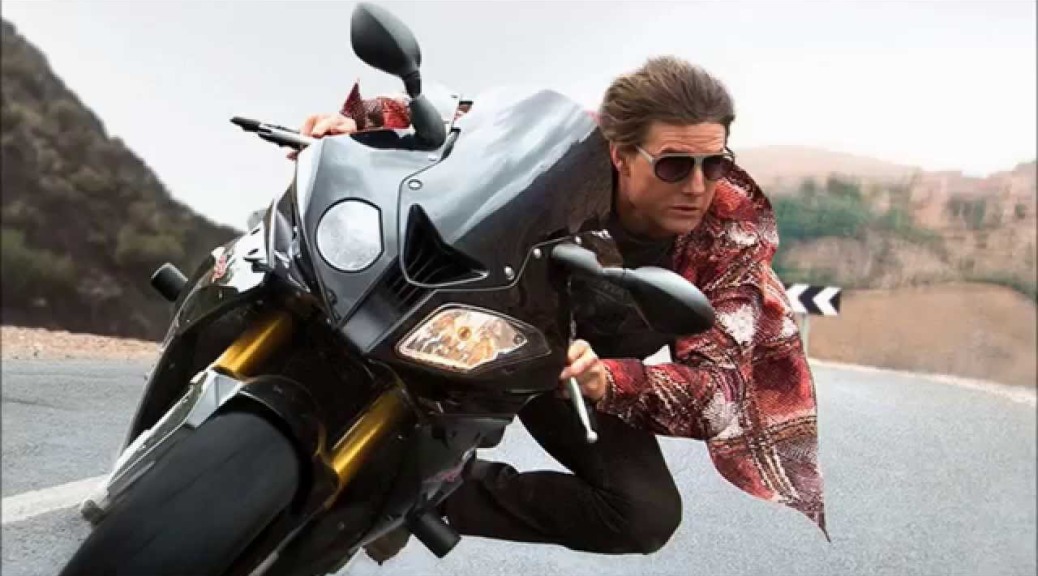 Tom has performed a couple of motorcycle chase scenes in his day. There was the one from his 2010 action/romance Knight and Day. However, because it is the better movie of the two, I am going to focus on the intense chase scene from Mission: Impossible – Rogue Nation. Immediately after getting out of a car that he flipped in the previous chase scene, Cruise jumps on a motorcycle in hot pursuit of Rebecca Ferguson’s character Isla Faust. During the chase scene that lasts around 3 minutes, he performs a variety of dangerous maneuvers at extremely high speeds. What’s even crazier is that he does it all without a helmet or padding. My mom would have been furious if I rode a bicycle without a helmet, much less a motorcycle!

Dangling from the Burj Khalifa 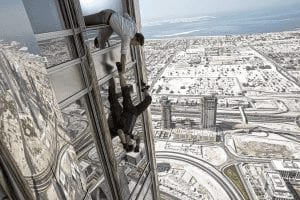 For those of you with a fear of heights, this photo is likely a little disturbing. At 49 years old, Tom Cruise steps outside and scales the side of the Burj Khalifa for the filming of Mission: Impossible – Ghost Protocol. In what is about a 7-minute scene, Cruise climbs up multiple stories of the building, runs along the side of it with a rope, and makes a leap from one ledge to another only to be caught by the ankle before falling 1,700 feet to his death. Of course, he was wearing a harness during the filming of this scene. Even so, it would still be absolutely terrifying and significantly dangerous. I would most definitely have thrown up on some poor unsuspecting pedestrian walking below, and I am not even afraid of heights. 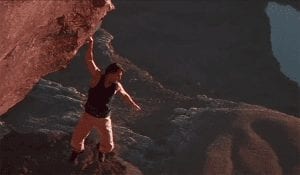 Tom Cruise’s obsession with death-defying movie stunts had to start somewhere, right? It’s possible that it began while filming this opening scene for Mission: Impossible 2. There has been some discrepancy as to whether or not this scene was actually performed by Tom Cruise or not. Some sites say that he had stunt doubles step in for him for the most intense sequences. Producer Paula Wagner and Director John Woo have both stated that Cruise insisted he do the shoot himself and would only wear a small safety cable. To quote John Woo in an interview with Entertainment Weekly Magazine, “I was so scared I was sweating. I couldn’t even watch the monitor when we shot it.”

Holding his Breath Underwater for Over 6 Minutes 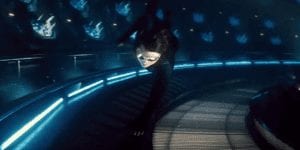 Remember that underwater scene in Rogue Nation where Ethan Hunt almost drowns? What is most amazing about that scene is that it is all done in one take. Not only that, but Tom Cruise actually holds his breath the entire time. There are no breathing tubes or anything like that, just Tom Cruise doing something crazy for the fans. After all is said and done, he holds his breath for close to 6 and a half minutes. The world record is over 20 minutes but that was done without any movement whatsoever. As you can see in the scene, Cruise is very active for the underwater scene which makes it even more impressive that he was able to hold his breath that long.

Clinging to the Outside of a Plane 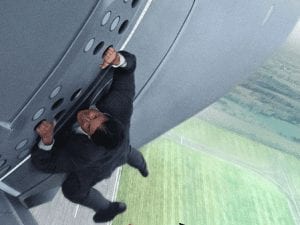 This is far and away the craziest thing that Tom Cruise has ever done in my opinion. For the opening scene of Rogue Nation, Tom Cruise held on to the outside of an Airbus A400M aircraft during takeoff. It was a stunt that required him to brave wind speeds up to 185mph, and he did it without protective goggles.  CNN did an interview with Cruise’s stunt coordinator Wade Eastwood in which he mentions that at first Tom had a very tight harness when rehearsing the scene, but Tom felt like it took away from his ability to show emotion during the scene so he had it loosened significantly. In order for the crew to get all the footage they needed, they performed the stunt eight times. What’s more amazing is that he did it all while wearing a business suit.

Thanks for reading!  What are your thoughts on Tom Cruise’s crazy stunts? Did we miss any?  Comment down below!

[…] Scientology aside, Tom Cruise has been at the forefront of Hollywood for quite some time. He has almost always chosen scripts that accent his talents, providing very enjoyable films that do well all over the world. His performances are always fully committed — sometimes a little too committed. He has the perfect blend of longevity, acclaim, box office success, impact, and, let’s face it, he’s always playing a version of himself. From Risky Business in 1983 to his continued success in the Mission: Impossible franchise, Cruise has continued to impress. […]

That aside, Cruise is still pretty awesome

Good article. Yes, these are the big stunts but some of the small stuff is equally impressive. I like the scene in rogue nation where he is tied to the pole and leverages himself up and off the top. (Assuming it was cruise) very impressive. What’s most depressing is he’s my age: I struggle to get out of a chair!

Thanks Bob! it is amazing what the man is doing well into his 50s.

Tom Cruise commitment to every role he chooses, even his bad movies, is what usually keeps drawn into his movies. For the Mission: Impossible franchise with him serving as a producer for the whole series I admire his willingness to take risks with the franchise as much as he does. He believes in his characters, actually does the stunts himself, and his enjoyable on screen presence makes the franchise enjoyable throughout. Can’t wait to see what he pulls off in MI: Fallout

Are you serious? Or, just in love with celebrities/testosterone junkies who should retire…Just as Michael Jordan, Tiger Woods, Wesley Snipes, etc., etc? As with the others, Cruise is looking to fill his pockets with green and egoism.

Well written article! I love this series because of the action scenes and it also is always reinventing itself, making itself better. Agree with the assessment of Rogue Nation. One of my favorites in the series by far and I also loved his take on Jack Reacher in the first Reacher film.

Thanks! I liked the first Jack Reacher ok, the second one was a little too much of the same for me.