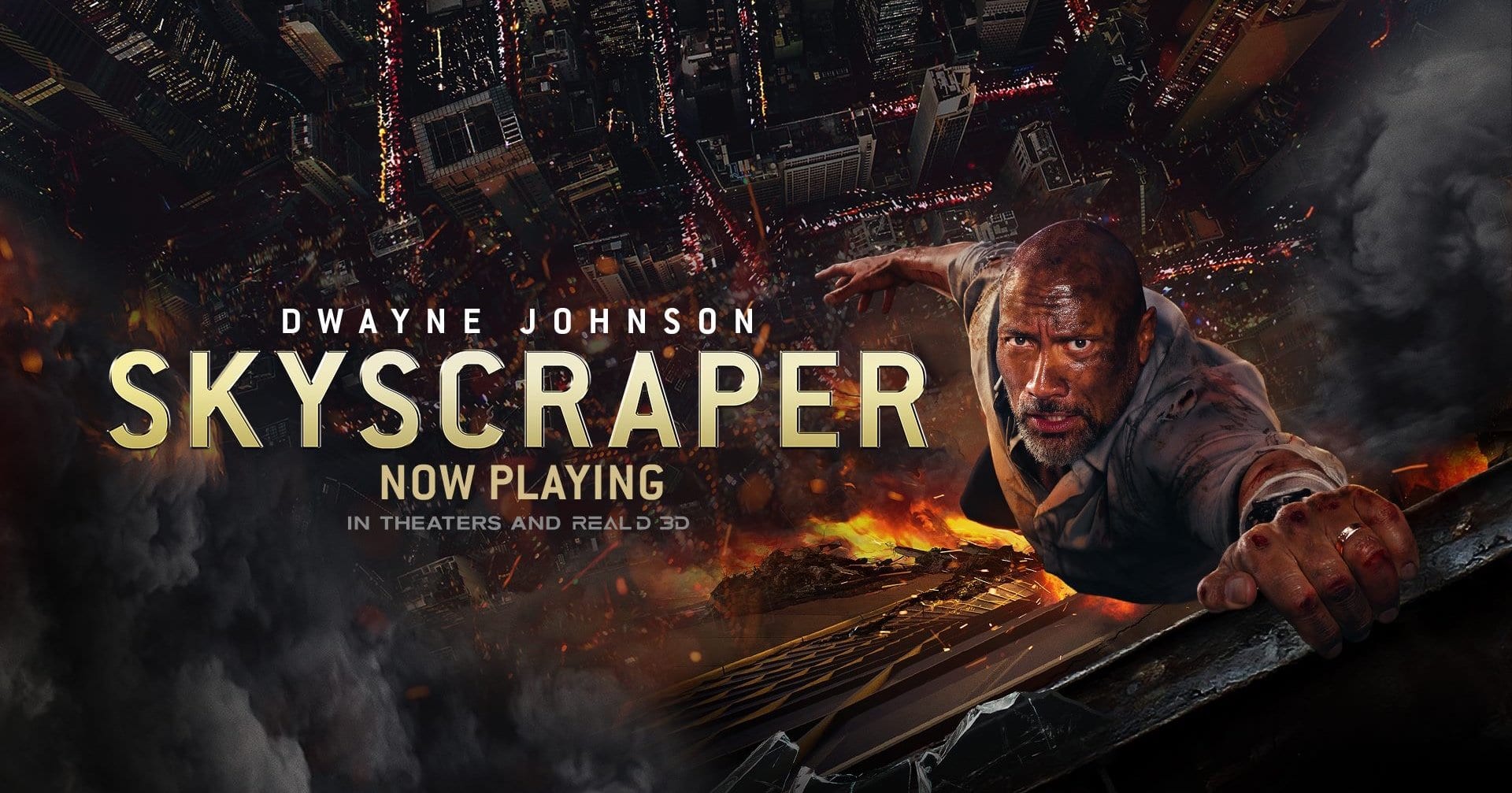 Skyscraper, or, considering its familiar setup and story, Sky Hard — or maybe even Rock Hard if sexual innuendos are your bread and butter — is the latest action vehicle for The Rock to show off his rippling body as he narrowly escapes harrowing obstacles…all in the name of family. Honestly, all of his movies are starting to run together at this point, but one thing is for certain: The Rock still knows how to entertain.

After suffering a traumatic injury as a member of the FBI, Will Sawyer (Johnson) laid down his sword, shifting towards security work after settling down with his wife Sarah (Campbell) and his two children. It turns out that Will is pretty good at his job as well, as his next security project is the largest building in the world: The Pearl.

Over 200 stories high, The Pearl is advanced is just about every way, even down to its security measures. But when a nondescript man starts to wreak havoc in the building, putting Will’s family at risk, Will must fight through injuries and fire to save the day.

When you’re as massive as The Rock, it’s pretty hard to appear believable in a film. You wouldn’t believe The Rock as an everyman type of character, would you?

It’s a good problem to have — a problem that most of us regular humans don’t empathize with — to be so massive to the point where you aren’t a reasonable choice for a regular human being. As a result, Johnson’s characters normally all have very similar backgrounds as former military operatives or members of law enforcement. Miles Surrey of The Ringer perfectly broke down the familiar nature of Johnson’s roles leading up to Rampage a few months ago and I must say: it’s pretty perfect.

Familiar isn’t necessarily a bad thing, but at this point, with any starring vehicle with The Rock, you know what you’re going to get.

One of the major goals for a screenwriter is to create a tight script, to add enough detail and world-building while still making every piece relevant and fascinating. It’s easier said and done, and it separates the bad from the good in Hollywood.

The entire first act of Skyscraper works with this idea in mind, moving around from place to place and room to room and pointing out everything that will be important to the plot later down the line. Director Rawson Marshall Thurber does so while maintaining a level of fluidity and grace, riding the line between fun dialogue and exposition dumping ever so tidily. You get everything you need to know with just enough flare for it not to seem like it was a screenwriting chore.

Scripts too often become so unwieldy in the pursuit of a sweeping epic. Ambition is a great trait to have, but it can absolutely get in the way. And then there’s Skyscraper, which is so concerned with moving the needle in the exact opposite direction — towards telling a stimulating but not challenging or long-winded story — that I couldn’t help but appreciate it.

If you try to apply standard logic to Skyscraper, you’d realize that everyone would die of smoke inhalation somewhere in the second act of the film. But the film works with its own set of rules, sticking to them to create a close facsimile of relatable stakes.

Although The Rock isn’t believable as a regular fella, he is believable as a force of nature, so when he’s jumping from platform to platform in the name of family — it’s great fun. I would go as far as saying that Skyscraper is worth the few extra bucks for an IMAX showing. Tension is ratcheted up as The Rock almost falls to his death while scaling a construction crane, repelling down the biggest building in the world, or doing anything else that involves verticality.  The camera is smart to slowly pan down to the ground below from Johnson’s position to send anyone in the audience with a fear of heights into a light panic.

For as standard as Skyscraper is, it still fills itself with great moments to elevate it above the usual generic action fare.

“Original” and this Film Do Not Go Together

Skyscraper was never designed to be a great film. It will never be more than a fun diversion — it’s simply too familiar and cookie-cutter. Many critics are comparing the film to Die Hard and The Towering Inferno, and they’re not wrong for doing so. While entertaining, Skyscraper clearly borrows from other — arguably better — films.

Skyscraper is fairly derivative in that sense. You already know what the main beats of the this story are just by watching the trailer. I think that the ‘expectation game’ is key for this film. Come in with sky-high hopes, you’ll leave feeling cheated. Come in expecting a well-crafted but standard action showcase and a smile will come to your face.

Admittedly, there’s just not much to this film. You know what it entails and you probably don’t need me to tell you that. 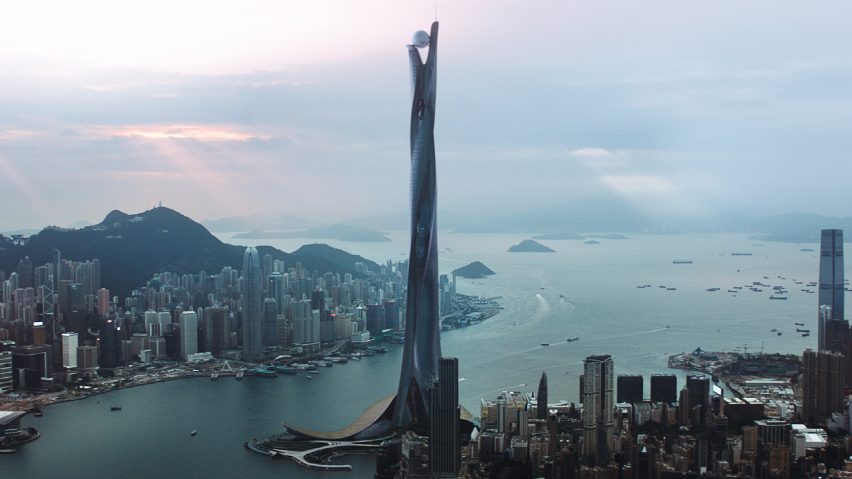 Odds are you’ve seen Die Hard and The Towering Inferno, so Skyscraper won’t provide anything great in the realm of originality.  But, for what it is, Skyscraper is undeniably efficient, creating tension and set pieces that work more and more as the screen on which you’re watching the film gets bigger and bigger.

The Rock knows what he does best, and Skyscraper is one of the better examples of him getting his formula right.  It’s classic blockbuster filmmaking with enough standard thrills for you to want to quickly run to concessions to buy that second tub of popcorn.

Thank you for reading! What are you thoughts on Skyscraper? Comment down below!

[…] he manage to keep such a straight face during emotional scenes? How does he manage to make those death-defying leaps from the sidewalk up to the top of a building? These are secrets that only Neil Breen himself […]

I’m really excited to see this one! The preview looked so good! At least, I thought so. And Die Hard is classic!! So, it’s great to have another one in the same vein.

It’s exactly what you think it is — you’ll realize that when you see it lol. I hope you enjoy!

I wondered who would like this one..now I see.. :)

Lol! Were you not a fan?

Let’s just say the only reason I gave it a D- vs. a flat out F – was because it was so senselessly stupid & ridiculous, I had to laugh at some parts.

Lol I don’t blame you! It’s not exactly “high-brow entertainment.” But hey, sue me, I had fun! lol

Haven’t seen this yet,film but just might. I read another article about Dwayne Johnson in this role. It described him as the exact opposite emotionally of many of the other typical Bruce Willis, Arnold types who take on these types of roles. He is secure in his marriage and family and doesn’t have to do all these spectacular things to prove he’s a man’s man – he just does it to save his family. Got to give The Rock his due – he does come across as pretty likable on screen.

That description is pretty spot on! His character is super likable in every way — you can’t help but root for him.