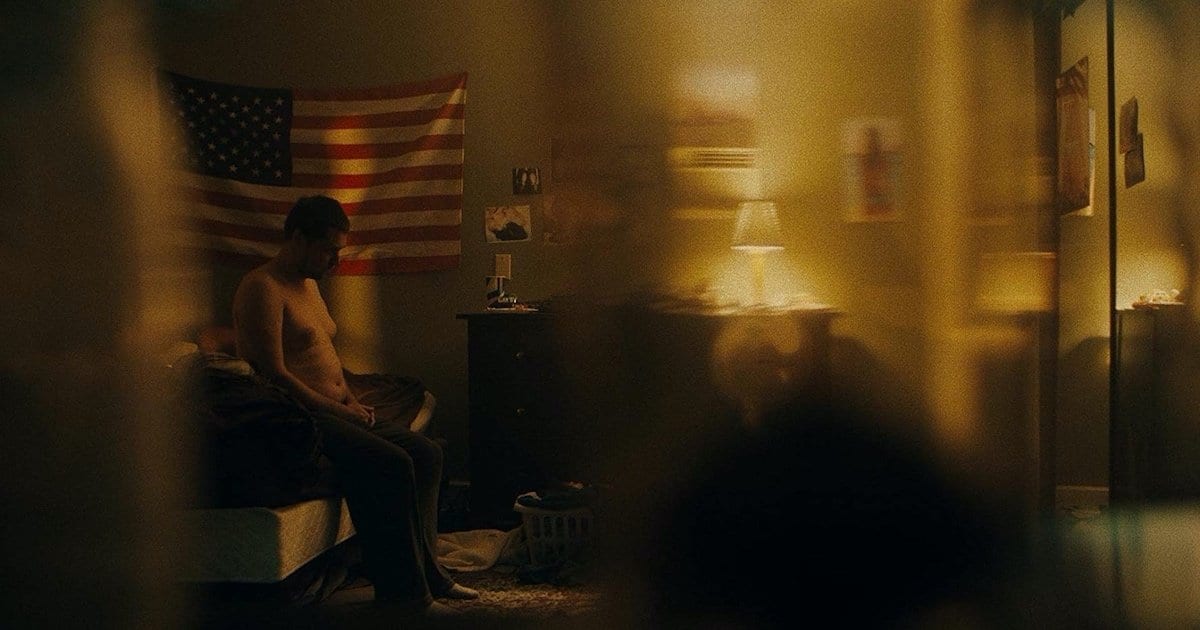 I’ll be honest, my reasons for seeing Cuck were partly masochistic. I wanted to find out if this film was as bad as it appeared to be. Many people are mocking this film, and it’s easy to see why. Everything about its presentation seemed annoyingly obvious.

Putting those initial feelings aside, it has to be said that the premise has promise. Delving into the psychological turmoil of a lone white male, who engulfs himself with right-wing conspiracy theories and bigoted rhetoric, is an interesting and timely subject. Naturally, its premise is an updated version of Martin Scorsese’s Taxi Driver, and part of a series of films about disturbed loners, such as The King of Comedy, Ingrid Goes West and the recent, Joker.

Using the setting of a currently cultural divided America, a country that currently has a president purveying conspiracy theories, Cuck could make itself one of the more relevant films of today. Unfortunately, as you can probably guess from its title alone, Cuck isn’t going to tackle these issues with any delicacy and certainly not with any subtlety.

Everything about its presentation is annoyingly obvious. And even the committed lead performance by Zachary Ray Sherman can’t save the project.

Ronnie (Zachary Ray Sherman) considers himself a patriotic warrior in the current culture war brewing within America. In his mind, the left is assaulting the true American identity, with their emphasis on excessive tolerance and diversity. All he wants is to enable the roots of America he adores, the America preached about by his late father and the conservative pundits he listens to on a daily basis.

He wants to do this by serving in the military which, due to a criminal misdemeanor in the past and failing to pass the psychological exam, has denied him this opportunity. Ronnie lives with his ailing and sycophantic mother (Sally Kirkland), who just wants him to be a good boy so he can make his late father proud.

Things seem to take a turn however when he befriends Candy (Monique Parent), a kindly porn-star. She convinces him to co-star in her numerous videos, all filmed by her husband, Bill (Timothy V. Murphy). In all those videos, Ronnie plays a loser husband who is forced to watch his wife having sex with a more strapping and virile man.

Ronnie’ vlog becomes increasingly popular, even gaining the attraction of his idol, Chance Dalmain (Travis Hammer). Things seem to be going well for him. But it doesn’t take long before Ronnie’s world falls apart. And as Ronnie feels increasingly betrayed and alienated from the world around him, Ronnie begins to retaliate violently.

Cuck‘s biggest flaws lie in its writing, but what keeps it from being a complete disaster is Zachary Ray Sherman, whose performance elevates the material. Even though the script doesn’t give him that much to work with, Sherman commits to it fully. Having gained a significant amount of weight, Sherman fearlessly shows off his paunchy figure without any shame.

Ronnie’s temper tantrums are convincingly portrayed and when he finally snaps, his eyes have the intensity of the mindless psychopath. It’s unfortunate that the character is written to be so unlikable. Yes, that’s largely the point, but the character doesn’t have a single ounce of empathy from the screenwriters. You never felt that Scorsese was judging Travis Bickle or Rupert Pupkin — he was just telling their stories. It feels that the writers are judging and making fun of Ronnie throughout Cuck.

The score by ROOM8 is a noteworthy positive. Its dreamlike synth-beats neatly accompany Ronnie’s continued alienation of the world. It’s a shame Cuck wasn’t any better around it.

Cuck Falls Back on Painful Clichés

Comparatively to Joker, it was a mental illness and the breaking down of Arthur Fleck’s identity that led to his eventual violent transformation. In Cuck, it’s just because he’s scared of the phantom “lib-tards” that are invading his country. There’s no reason given for his frustration or political ideology. His characterization hardly makes sense. Perhaps a script that properly explored his mental state would have provided those necessary answers. We are supposed to dislike Ronnie — he’s just the symbol of loner incels that we hear so much about. But we are never given a reason to understand or empathize with him.

With that, Ronnie is also given a stock creepy mother character, who seems to have incestuous tendencies. In fact, just about every character is the stock version of a scummy individual. Ronnie’s lack of intelligence makes it even easier to laugh at him and the movie.

The culmination of the eventual plot is predictable, though it does have a slightly touching moment in the end. Unfortunately, it’s too little and too late by that point.

Cuck is an overblown character study that lacks the intelligence or nuance needed for this material. Everything is severely over the top and nothing feels genuine. A touch of empathy for the struggling main character could have gone a long way. It never feels like we are getting an in-depth look into this extreme-right wing sub-culture. It just feels like a shallow portrayal, meant to validate our initial biases about these individuals.

Even though the performances are generally good, the characters are mostly paper-thin — with the possible exception of Candy played by Monique Parent. It’s not as bad as it looks, it’s just one big “meh.” Cuck might have good intentions but in the case of this film, it’s certainly not enough. As I said before, in my review of The Fanatic, imagine what Paul Schrader could have done with this material.

If you want to watch a good loner film, starring a similar main character, watch Observe and Report instead. Cuck is the unfunny, less subversive version of that story.

Thanks for reading, and listening! What are your thoughts on Cuck? Comment down below!

[…] on film is sneakily the best aspect of the entire short.) Luckily, this isn’t a stereotypical loner film, it has far more compassion for its main […]

I think you missed the point of the entire film,Chris. The hard truth is we DO have people just like Ronnie in the U.S. and when is there any good reason for anyone to get radicalized? I see people like this spout off on YouTube and Twitter every single day. I think “Cuck” got a lot more right then most Incels like and that is why they are lashing out. Is this movie perfect? No but then again,neither is “Taxi Driver”,right?