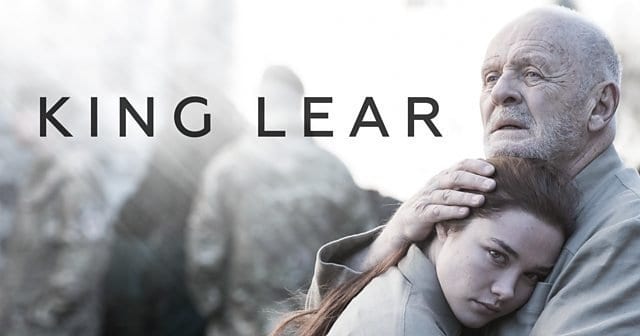 Anthony Hopkins is King Lear in this stylish and invigorating adaptation of Shakespeare’s classic. Produced by Amazon Prime and directed by Richard Eyre, King Lear is a highly original film with a brilliant cast, but never quite succeeds in achieving masterpiece status.

Written By: Richard Eyre, from the play by William Shakespeare.

Lear (Anthony Hopkins) is the king of England, a modern-day, alternate-reality military dictatorship. Wishing to spend his twilight years in peace, he makes the unwise decision to divide his kingdom between his three daughters, Goneril (Emma Thompson), Regan (Emily Watson) and Cordelia (Florence Pugh).  With each daughter’s share being contingent on how eloquently she flatters him, Goneril and Regan both spout blatantly insincere platitudes about loving their dearest papa more than life. The sisters’ performance does not impress Cordelia, Lear’s favorite child.

Refusing to play at the game of flattery, she declares that she loves her father as much as she should; no more, no less. Lear, incensed at what he sees as a betrayal, disinherits Cordelia on the spot and packs her off  o marry the king of France without a dowry. With Cordelia out of the way, and Goneril and Regan on a mission to dispose of their tiresome father, Lear’s life descends into a nightmare of abandonment, lunacy and loss.

King Lear‘s cast is a dream. Its charismatic combination of legendary, old-guard British actors and brilliant young stars is electrifying, and is such a pleasure to watch that the film’s (many) faults often fade into insignificance in its wake. 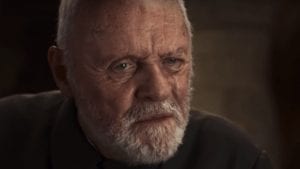 Anthony Hopkins is volcanic, gigantic and mesmerizing. In his role as Lear, he dismisses all memory of his odder film choices in the 2000s (Beowulf? Why?) and demonstrates that he is a titanic Shakespearean actor at the very height of his powers. With his strikingly expressive face and eyes, he inspires fear, disgust and disbelief as Lear the tyrant and miserable pity as Lear the agonised, storm-struck lunatic, all with perfect control of the language and the devastating emotions locked inside it.

As well as casting a splendid Lear, the production has also picked the perfect trio to play his daughters. Emma Thompson repeatedly risks stealing the show from her co-stars with her intelligent and wry performance. Her Goneril is smart, power-hungry, ruthless, and most surprisingly, vulnerable, and her chemistry with Anthony Hopkins that imbued The Remains of the Day with such sadness makes for electrifying scenes between the two.

Emily Watson’s Regan makes one’s skin crawl. She is syrupy-sweet and patronising with her father one moment, and wielding cruelty like a whip the next. When the time comes to put out the Duke of Gloucester’s eyes, she uses her nails to do so. Her obvious arousal at the act does little to mask her obvious sadistic tendencies.

Regrettably, we see far too little of Florence Pugh as Cordelia. Though Pugh never once raises her voice or acts like anything other than a dutiful daughter, she exudes the same quiet, charismatic power that she demonstrated in her excellent 2016 breakout, Lady Macbeth.  With her limited screen time, she overcomes the stereotype of Cordelia as a sweet, overly-forgiving little wimp. The character is resolutely graceful at the loss of her inheritance and a tough, commanding figure as a member of the French army at the film’s end.

The Duke of Gloucester’s Happy Family

In King Lear‘s secondary plot line, the illegitimate and power-hungry Edmund (John MacMillan) decides to frame his brother Edgar (Andrew Scott) for conspiracy, and his unsuspecting Dad, the Duke of Gloucester (Jim Broadbent) for treason. It’s one of the dullest parts of the play. Exemplary actors play these characters in the film, but their unimpressive performances only serve to make this plot line even duller.

Jim Broadbent makes the inexplicable decision to turn the not-too-bright Gloucester into a boisterous, bumbling idiot, which impacts negatively on the deep empathy we are meant to feel for him.  Andrew Scott of Sherlock fame spends most of his performance as Edgar blathering, screaming and crying. At other times, he’s cavorting around without pants in a way that inspires neither hilarity nor compassion. The only time he returns to his habitual greatness is in his soliloquy following his duel with Edmund.

Edmund turns out to be the secondary plot line’s most interesting character, just as he is in the play. John MacMillan’s portrayal of the delight that Edmund takes in evil and chaos is absolutely riveting to watch and almost makes you wish that he would win.

King Lear has several lovely moments of art direction in which the eye almost sighs with delight: Lear’s initial meeting with his daughters, for example, is conducted in a stark stone chamber in the medieval style, with glass and steel furniture. The effect is both artistic and disturbing: Lear lives in a world that is hard, cold and resolutely masculine. Even beauty is about ruthlessness and hardness.

In other respects, however, the setting is so ambiguous it’s distracting. This does not only detract from the film’s visual beauty. It also turns what should have been a strength into a weakness. At first, King Lear seems to be set in contemporary Britain. Then, the heavy military presence leads us to believe that this might be a dictatorship. Then, we learn that France has a king and that Burgundy is not a part of France. So is this a dystopia? A  dystopia of regression, in the manner of A Canticle for Leibowitz? One of those weird modernized Shakespeares that don’t incorporate the new setting into the script and just end up confusing everyone? (I’m looking at you, A Midsummer Night’s Dream, 1999).

Eventually, this non-stop wondering about the setting bothered me so much that I had to stop and look it up. This does not make for the best cinematic experience, and I can’t help but wonder what would have happened in this regard if Lear had been intended for cinemas rather than Amazon Prime.

A major factor in Shakespeare’s timelessness is the way in which his words can be interpreted and reinterpreted. When placed into different contexts, his words can come to mean vastly different things from what he originally intended and create whole realms of unexpected subtext. King Lear takes full advantage of this tendency in a number of intelligent ways.

One of the most striking example’s of the film’s reinterpretation of words is its treatment of the character of Edmund. In the original play, Edmund’s motivations are resentment at his own bastardy and a certain enjoyment in being evil. Then, at the end of King Lear, he is called ‘half blood’ to his face. What could have meant any number of things in Shakespeare’s day becomes another matter entirely when Edmund is played by a person of color. By interpreting the ‘half blood’ slur this way, King Lear merges Edmund’s inferior social status and his blackness. The addition of disturbingly modern casual racism to Edmund’s list of issues is a brilliant way of grounding the film in the contemporary world.

Sexual harassment as a power tool 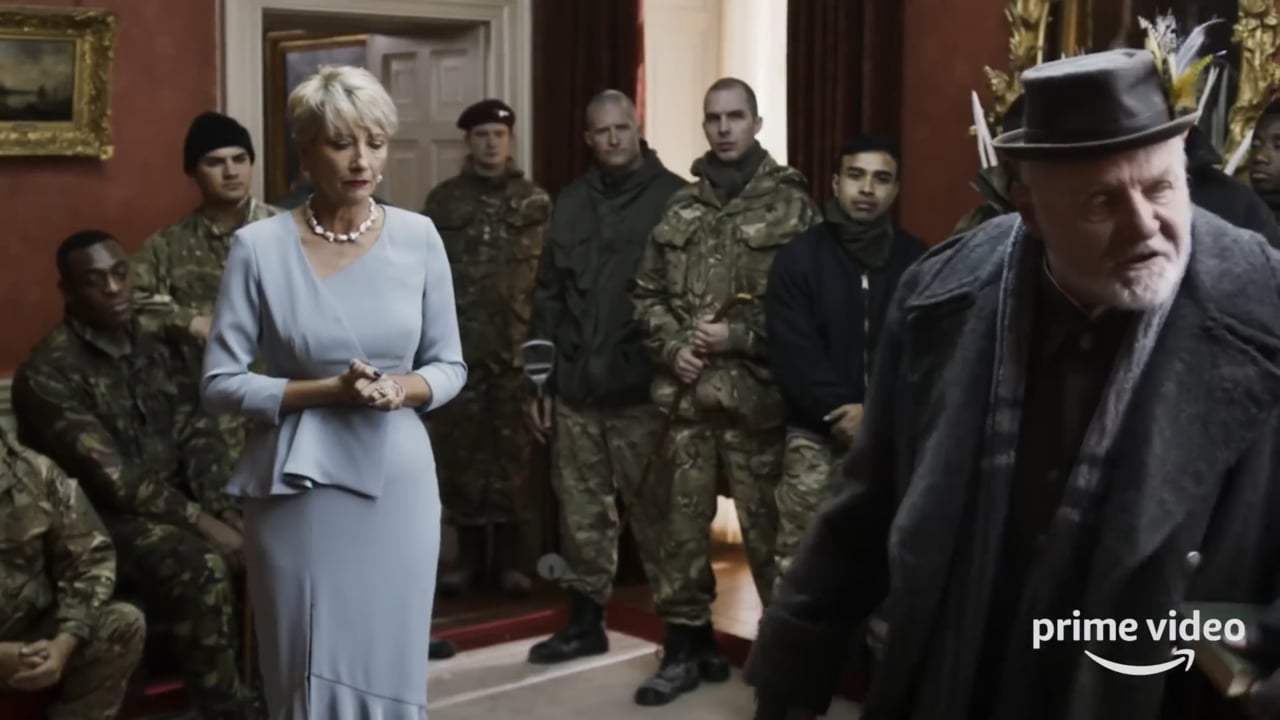 Another instance of the film’s refreshing command of subtext is the sinister undercurrent surrounding Lear’s relationship with Goneril. When I studied King Lear at school, our teachers insisted that Goneril’s whining about the behaviour of Lear’s knights in her house is disrespectful, and that Lear’s subsequent tantrum is excessive, but justified. This film, however, brilliantly suggests something far more ominous, just by adding extra actors and unexpected body language.

When Lear stays at Goneril’s house, she expresses distaste for the constant hunting, drinking and wild behaviour of his one hundred knights. One day after a hunt, Lear savagely berates her for this in the entrance hall of her own home. His tantrum takes place in front of one hundred soldiers who have spent the whole day spilling blood. They are running on adrenaline and testosterone, and drunk on wine and mob mentality. Though Goneril is impressively resolute in her criticism, it is clear that  the soldiers are a threat intended to shut her up.

We hardly have time to wonder at Lear’s treatment of his own daughter before he subjects her to fresh indignities. He calls her an animal and a disease, and wishes infertility upon her. He violates her personal space, repeatedly touches her body  despite her obvious terror, then violently kisses her on the lips. The kiss is a clear degradation; an assertion of dominance and a punishment for misbehaviour. Thus, while Lear’s words to Goneril are hideous in the play, the film’s use of body language to introduce such a disturbing sexual undercurrent is both fascinating and innovative.

King Lear is worth watching for its prodigious acting and original interpretation of Shakespeare. However, its ambiguous setting and tendency to make us disconnect from supporting characters prevent it from attaining true greatness.

The film is available to stream on Amazon Prime on the 28th September.

Thanks for reading! What are your thoughts on King Lear? Comment down below!

[…] Anthony Hopkins is a legend. The majesty of his onscreen presence is undeniable. With his voice and deep eyes, he […]