‘Rounders’ Turns 20: What the Film Taught Us About Poker, Risk-Taking, and Life In General 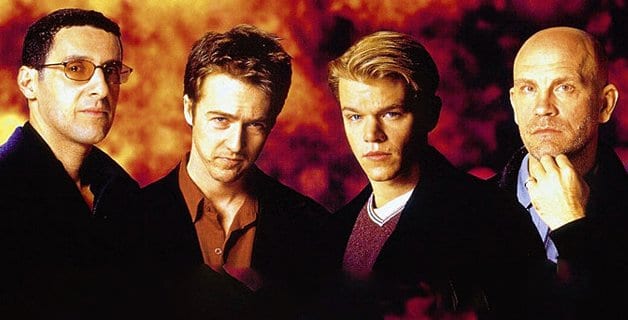 “If you can’t spot the sucker in your first half hour at the table, you ARE the sucker.” – Mike McDermott, Rounders

Words to live by.

I viewed Rounders for the very first time about five years ago after finding its stray DVD in a stack of other case-less films I carried with me from apartment to apartment in my early twenties. I liked it immediately because of its cast. At the time this movie was made, Edward Norton and Matt Damon were both riding the wave of newly acquired commercial success. As you most certainly know, unless you’ve been living under the proverbial rock, Damon and Norton have gone on to do quite well for themselves since 1998.

There is something about their rawness in this film that made me like both of them more than I did before seeing it. They each possess their own brand of cockiness that can only come with success, and it works perfectly for their roles. This film has plenty of quirkiness and gritty charm to make up for its flaws.

Since its release on September 11, 1998, Rounders has exposed countless people to the dark, seedy underworld of poker. Several professional poker players have named it as their inspiration for getting into the sport in the first place. Rounders succeeds because it follows one simple rule: A film doesn’t have to be perfect; it just has to be memorable.

Rounders is a Great Film for Casual Viewing

Rounders is a movie you can watch anytime, anyplace. It’s the PERFECT cable movie. You know, the one you stumble on when you are channel surfing your cable subscription on a random afternoon when you’re home sick. Think something like Twister or The Fugitive. It’s an easy watch. Plenty of drama and violence, but it’s not a heavy hitter that bums you out. It has some good messages about life, and it’s chock full of salty quotable moments.

Matt Damon and Edward Norton bring a casual yet sharp air to the film that makes them believable in their characters. They are supposed to be able to bluff someone over several thousands (maybe millions) of dollars, after all. It’s enough to keep you gripped, but not enough to leave you reeling.

I have my bugaboos about Rounders, like its predictability and outlandishness, but the movie is entertaining as hell. This film has some great qualities including committed acting, great set design and location choices, and numerous supreme quotable moments. While all of these components certainly help make the movie memorable, the story itself has depth. There are numerous themes explored throughout, and it attempts to show the good, the bad, and the ugly of living on the fringe. Elite Poker Is Not About Luck

Rounders portrays Poker as a game that requires relentless attention to detail, the ability to read people’s body language, and literal endurance. Top players must exercise rigid self-control, especially as they tire and become more prone to unconscious impulses, a.k.a “tells,” that can give things away to other players. Worm gives McDermott a hard time for being tired after a 36-hour stretch of card playing. I can’t imagine staying awake that long, let alone trying not to lose thousands of dollars in various card games.

Mike McDermott speaks often of his dream of winning the Poker World Series. To go up against the best and to win is the dream of every card player.

We find out later that McDermott has already played against the best and won, specifically this guy (pictured below), Johnny Chan, who won the World Series of Poker numerous times in the eighties. McDermott details the encounter to Joey Knish:

Mike McDermott: I never told anybody this, about eight nine months ago, I’m at the Taj, it’s late and I see Johnny Chan walk in and he goes and sits in the three hundred six hundred section and the whole place stops and everybody puts an eye on him, after a while there wasn’t a crap going on because all the high rollers are over there watching and some of them playing but they’re giving their money to him and say “oh”, I played with the world champion”, you know what I did?

Mike McDermott: I sat down.

Joey Knish: You need fifty to sixty grand to play right in that game.

Mike McDermott: I had six but I had to know.

Mike McDermott: Played tight for an hour, folded mostly then I made a score.

Joey Knish: With what? aces or kings?

Joey Knish: Re-raise? You play right back at him?

Mike McDermott: Yeah, he comes back over the top at me trying bully me like I’m some tourist, I hesitate for like two seconds then I’ll re-raise and he makes a move to his checks and he looks at me, check his cards and looks at me again, and he mucked it, I took it down.

Mike McDermott: [Flashback narrates Johnny Chan] did you have it?

Mike McDermott: I got up and walked to the cashier, I sat with the best in the world, and I won.

Poker is a game of skill, and even the most legendary players can falter.

The Life of a Professional Card Player is not Flashy

Rounders depicts several types of players with varying motivations and end goals. Joey Knish (John Turturro), for example, is merely interested in making a decent living and staying off people’s bad sides. He delivers a memorable line in response to McDermott’s appeal for $15K to get him out from under Worm’s load sharks:

Joey Knish: Stones? You little punk, I’m not playing for the thrill of fucking victory here, I owe rent, alimony, child support, I play for money, my kids eat, I got stones enough not to chase card actions of fucking pipe dreams of winning the world series on ESPN, but about the money I’ve got to turn my back, I’ve got to say no.

The character of Joey Knish is based on an actual poker player named Joel “Bagels” Rosenberg, who became a legend in the underground clubs of New York for his sarcasm and his ability to make a steady living off of the game. Writers Koppelman and Levien shadowed him for two years while doing research for the screenplay.

The more I read about this guy, the more I see pieces of him scattered throughout the film. Aside from the obvious similarities with the character Joey Knish,  Rounders is peppered with Bagel-isms and mirror images of his life. One of Worm’s most memorable lines, “in the poker game of life, women are the rake,” was taken right out of Bagels mouth according to Koppelman and Levien. Mike’s day job of driving a truck closely mimics Bagels’, who drove a bakery truck as a second source of income, hence the name “Bagels”. His career as a poker player was not about flashing a fat bank roll, although I’m sure he pocketed his fair share of cash. He lived life via a daily hustle at the card table, and made a long career of it until his death in 2014 at the age of 58.

You Can’t Fight Who You Are

Mike McDermott spends most of the film swimming against the current that is his passion for card playing. On the one hand, he’s crafted a bright and promising future with his girlfriend and fellow law student, Jo (Gretchen Mol). On the other hand, his desire to play is strong.

“I don’t know if I’m going to bring my legal career to a halt before it even starts, but I just can’t help myself.” – Mike McDermott before he reads the hand of every player at a table full of judges, professors, and seasoned law professionals.

Among the card players was his law professor, Abe Petrovsky (Martin Landau). Petrovsky serves as a wise pillar of truth for McDermott, often acting as his only friend who truly wants the best for him. Recognizing McDermott’s angst and conflict over where his life is headed, Petrovsky uses his own tale of going against the grain to find happiness. He offers this rock solid piece of advice:

“We can’t run from who we are. Our destiny chooses us.”

If there is one thing Rounders burned into my brain, it’s this: If you listen closely while separating the two cookies of an Oreo, you might hear the future.

Teddy KGB, aka Russian John Malkovich, has a thing for America’s Favorite Cookie. He keeps them in a chip tray marked “DO NOT TOUCH.” I wonder what kind of shenanigans lead to him marking his Oreos off limits from other card players. McDermott eventually finds KGB’s tell in his cookie habit, and uses this knowledge to rattle the Russian.

According to McDermott, every player has a tell, an unconscious gesture or movement that signals their stress level and therefore their hand, you just have to pay attention. 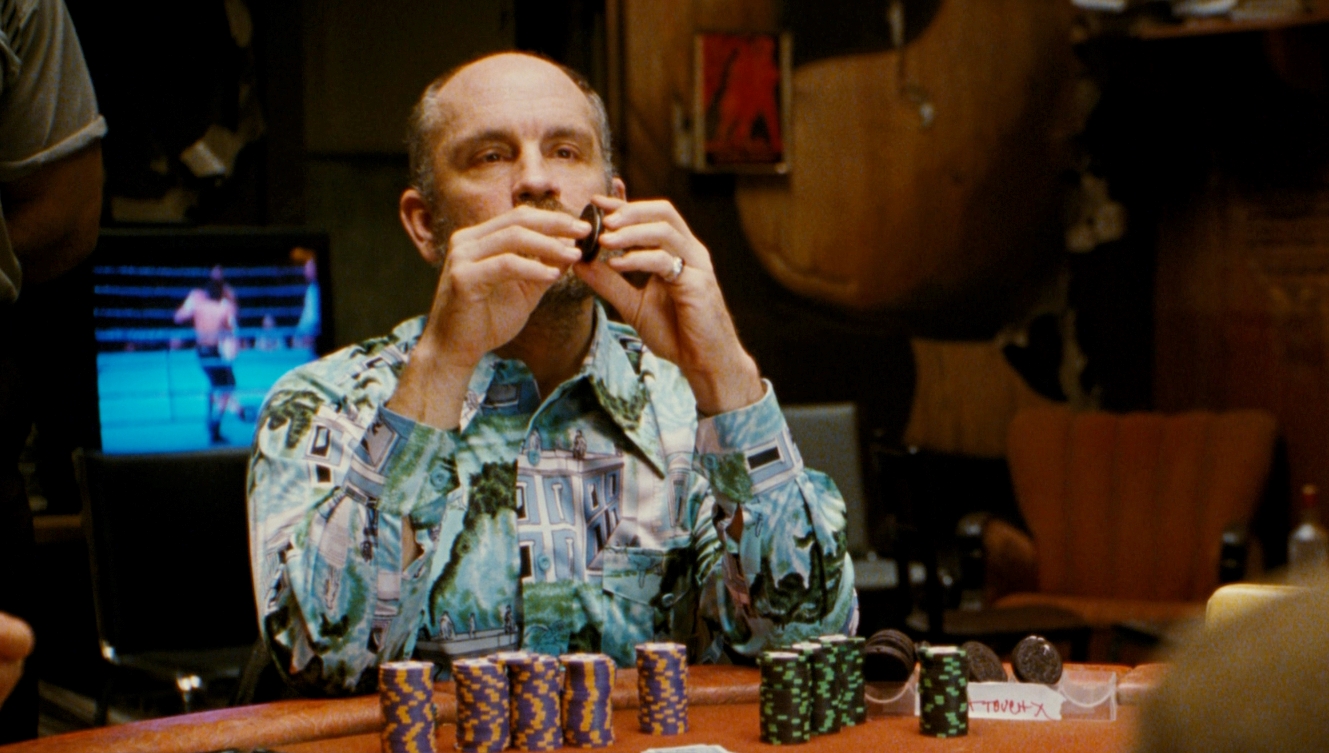 Rounders may not be a cinematic masterpiece, but it’s fun, engaging, and entertaining to a wide range of viewers. It helped popularize poker among a broader audience in a way that only mainstream cinema could foster.

This film is bursting at the seams with broader lessons about personal identity and destiny. Sure, those moments might be a little on the nose, but it gives the film backbone.

Above all else, one thing is certain: I will never grow tired of seeing John Malkovich playing an angry, Oreo-grubbing Russian club owner.

image via Falcon at the Movies

Thank you for reading! Is Rounders one of your favorite movies? What’s your favorite moment? Did it make you want to give up white-collar life and go get in a poker game? Comment down below!

[…] also a great movie to look at for other valuable lessons. The importance of risk-taking in poker is one of many tips given its due prominence. But it does not back away from the realities of risk-taking in […]