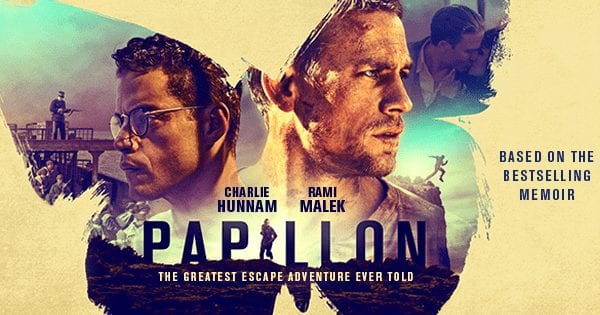 In a time where Hollywood attempts to reboot and remake practically every popular piece of intellectual property, Papillon, the remake of the 1973 film of the same name, has arrived in theaters with limited vitriol from fans.

And that might be for the best, as Michael Noer’s take on the famous story is a beautifully crafted update, one that begs to be seen on the big screen.

Written By: Aaron Guzikowski and Henri Charrière (based on the book by)

After a night of cat burgling and drinking, Henri “Papillon” Charrière (Hunnam) is awoken by an army of police officers in his home, but they accuse Papi of murder, not burglary. Papillon is quickly taken away, thrown into a prison camp in French Guiana without a trial.

Papi’s not going to just let his life slip away in a penal colony, so he quickly makes plans for an escape, but he’ll need a little help — monetarily, that is — from a fellow inmate: Louis Dega (Malek). Together, over many years, the two form a fascinating bond — all in the face of one of the most difficult bouts of adversity one could ever come across: continuing to find the will to live.

As you may or may not know, Papillon is a remake of the 1973 film of the same name that starred Steve McQueen and Dustin Hoffman. By all accounts, the original is a beloved film, sporting a 8/10 score on IMDb, a mark that puts the film just outside the IMDb Top 250 list.

So why was this movie remade? As always, it’s not one singular thing that got Papillon the green light.

If I had to guess (it seems like all journalism has been reduced to guessing these days, so why not throw my hat into the ring?), I’d look no further than the distributor of the film, Bleecker Street.

The company was founded back in 2014, and ever since they’ve been focused on producing prestige-focused films, teaming with vision-driven filmmakers like Steven Soderbergh. Think of Papillon as the arthouse version of one of your favorite franchises getting a reboot. In some corners of the world, Papillon is a big-time property, one that people should flock to the theaters to see…in a relative sense of the phrase.

Yeah…I have a problem. But don’t worry, I have an appointment with the local shrink next week.

But this arrangement of constant movie binge-watching causes the movies that are middle-of-the-road to turn to mush in my brain after a few weeks. I look through the archives of this very website and think to myself, “wait, that was a movie that came out?” Most of the time it’s because the films fail to have a defining characteristic. Thankfully, Papillon has not one, but two things that are burned into my brain: amazing production design and cinematography.

Shot predominantly in Malta, Montenegro, and Serbia, Papillon uses its incredible locations to perfection. And when combined with some beautiful shots that take place at sunset, you have a visual marvel on your hands. Seriously, this movie is gorgeous. I can’t remember the last time a movie used the sunlight to achieve such jaw-dropping heights. Its use of shadow and red-orange color from a falling sun is breathtaking. It adds more layers to the movie, making it feel more important and epic than it would have otherwise.

Speaking of epic, we don’t get many movies like Papillon these days. This movie takes its sweet ol’ time, dragging out sequences that most studios would have told the director to cut altogether. It lets you sink back and drink in the scenery, to contemplate the harrowing events on the screen. Yet, it’s never boring — not even close. You feel the gravity of the situation as Charlie Hunnam’s Papi fights for the will to live. At times, it’s a punishing experience.

Impressively, Charlie Hunnam lost 35 pounds over the course of filming, and it’s one of the better things to happen to his movie career. Like his role in The Lost City of Z, he’s stripped of that macho man physique that put him on the map with programs like Sons of Anarchy. He’s forced to rely on wit and will both as an actor and as a character working within the confines of the narrative.

Papillon is a good ol’ fashion prison break. It’s a classic kind of flick, one where the human spirit is tested beyond the point where a majority of the world’s population would break. There isn’t many ties to the modern-day from a thematic standpoint. It merely wants to tell the story it sets out to tell. Combined with the fact this is a widely-scoped period piece, Papillon is suitably refreshing.

Criticism: Understanding the Point of View of the Individual Critic

No critic is without some sort of bias — don’t let anyone tell you otherwise. We try to be as objective as possible, but there’s always something keeping that from being possible.

But then again, film criticism isn’t about being right — no one can be right when it comes to analyzing a film’s merits. It’s about finding a source of opinion with which you can connect on some level — you don’t even have to agree with it (that’s an idea that escapes most film talk these days). Understanding where the critic is coming from is the key idea.

So with that in mind, it’s important to note that I saw 2018’s Papillon without seeing 1973’s Papillon. It’s a hole in my movie knowledge and something I should fix sooner rather than later. I could never speak to the necessity of another Papillon or even if its elements which I found dazzling are old and tired — and there are millions of other people who are in the same boat. If you clicked on this review hoping for some eloquent comparison between the two versions of this story, sadly, you’ll be disappointed.

I can only take this film for what it is, not what its place is in the grand scheme of things. So to me, Papillon is pretty damn entertaining.

However, there are some issues here that I must note. Motivations for these characters to stay alive are muddled at best, so you never buy into their plights completely. Characterization is not this movie’s strongest trait. The movie even plays out like it has multiple climaxes, a scenario which may leave you exhausted by the end.

It’s an imperfect ride that consistently does just enough to win you over — that’s all that many are looking for out of any film they see, regardless if it has larger ties to movie history or not.

It’s unclear if 2018’s Papillon is what you would call “necessary,” but one thing is very clear: this version of Papillon is a technical achievement. Some of its sunny images will be burned into my memory for quite some time; you should do your very best to see this movie in a theater.

I have so much appreciation for a film that takes its time to tell its story, flowing from scene to scene at its own, confident speed. You feel like you’re watching something epic, and the actual content of the movie does enough to keep that feeling alive over two hours and thirteen minutes.

Thank you for reading! What are you thoughts on Papillon? Comment down below!

Read your review on Papillon and how the film is done!
Super legit and wanted to share my thoughts on the movie.
Come check it out at: msmoonwalker.wordpress.com/2018/10/07/film-papillon/

I’m okay with these if done right. The problem is the old and classics, you can’t even get on DVD anymore. If you find any of them occasional on TV; that is if you subscribe. I look forward to seeing this in the future

I’m definitely making watching the original a priority after seeing it — I hope that others feel the same way!

Whatever next? A remake of Taxi Driver? Reboot the Godfather trilogy? Give me a break. Whatever its intentions, this film wasn’t needed.Nice post though.

I hear you on that one — it’s a slippery slope, that’s for sure!

Great post. I’ve read the book twice and thought the McQueen/Hoffman story a bit too superficial, though it was well cast. The book is probably around 500 pages, it’s probably a challenge to condense that down to about 120 mins.
I’m pretty certain the penal colony was in French Guiana not French Guinea. :)

Thanks so much for your kind words! You’re so right — I blame the editor! lol