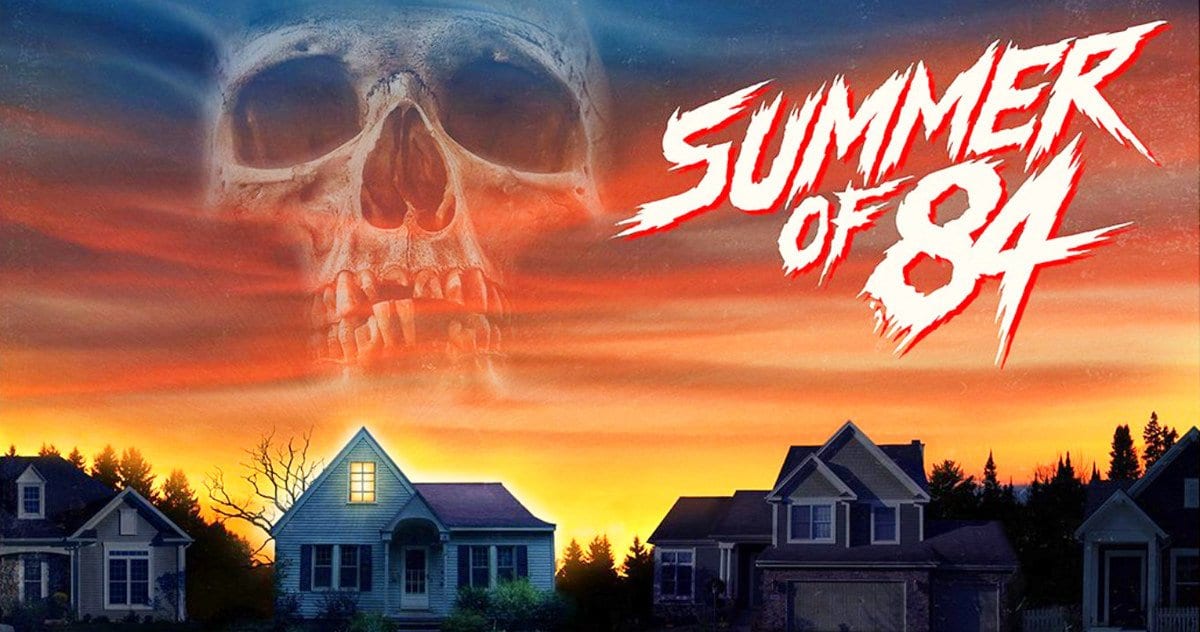 After my glowing review to 2018’s Puppet Master reboot — I regret nothing — I’m back with the film I have been anticipating all year: Summer of ’84. This is a new film by the trio-director known as RKSS. I am a giant fan of their previous film, Turbo Kid (2015), so I had high hopes for Summer of ’84. I did worry a little bit when I read lukewarm review after lukewarm review. But with Le Matos doing the soundtrack, the great homage poster of one of my favorite 80’s horror films (Fright Night) and the intriguing trailer, I was still excited.

As the title would suggest, the film takes place during one particular summer in 1984. In true 80’s fashion, we are introduced to a group of four kids — each kid has their not so unique idiosyncrasies. We have the overly curious Davey (Graham Verchere), the kindhearted and overweight Woody (Caleb Emery), the delinquent Tommy (Judah Lewis) and the geeky Curtis (Cory Gruter-Andrew). They mostly hang out in their treehouse, ogle their parents nudie magazines and have long-winded conversations. They talk about everything from women (sometimes about someone’s mother), pop-culture (one of them actually defends the Ewoks of Jedi) and wild conspiracy theories. The latter of the four, Davey, becomes convinced that his friendly police-officer neighbor, Wayne Mackey (Rich Somers), is actually the serial-killer known as the Cape May Slayer.

The foursome decide to investigate and spy on Mackey, hoping to uncover the ultimate damaging proof. While investigating, Davey becomes close with his former babysitter Nikkie (Tiera Skovbye), who is depressed over her parents upcoming divorce. Will the investigation lead to a fruitless cause or could Mackey actually be the serial-killer? They can’t help but wonder who is capable of killing thirteen kids? As the main character tells us: “Every serial-killer was a neighbor to someone…”

The film’s main virtue is its extremely likable leads. The four kids have wonderful chemistry as they go about their mission with youthful excitement. While most millennials will probably make comparisons with the popular Netflix Original Stranger Things, I feel they are closer to Rob Reiner’s Stand by Me. These kids are full of raging hormones and are on the edge of losing their innocence. The dialogue and banter of these kids is unapologetically R-rated and politically incorrect.

An honest depiction of a group of teenagers was something I really admired. It’s not often we see a film centered on young teens who talk so brazenly — usually this would mean giving the film an R rating. Most producers don’t like an R rating since they want a film starring teens to appeal to teens.

Each of the kids portray their 80’s stereotype well. We have the innocent and good-hearted lead Davey, the sweet and portly Woody, the tough-kid Tommy and the obvious nerd Curtis (he makes pop-culture references throughout the film). While all of the characters don’t have much depth, the chemistry between them performs wonders throughout the movie.

The rest of the cast is fine. The neighborhood’s possible serial-killer Wayne Mackey, Rich Somers from Mad Men fame, does a great job in making you question his true nature. He does seem genuine in his kindheartedness towards his neighbors, but his strange and suspicious antics are very out of place. Somers’ innocuous and unassuming presence is perfect for the part. As a viewer you are constantly questioning whether or not he really is the eponymous serial-killer. Just like RKSS’s previous film, Turbo Kid, the soundtrack to Summer of 84′ is done by French-Canadian Synthwave Duo Le Matos. Just like in Turbo Kid, their soundtrack is one of the highlights of the film. The music perfectly draws you into that synth-heavy period, and it also heightens the film’s creeping suspense — especially in the final act. 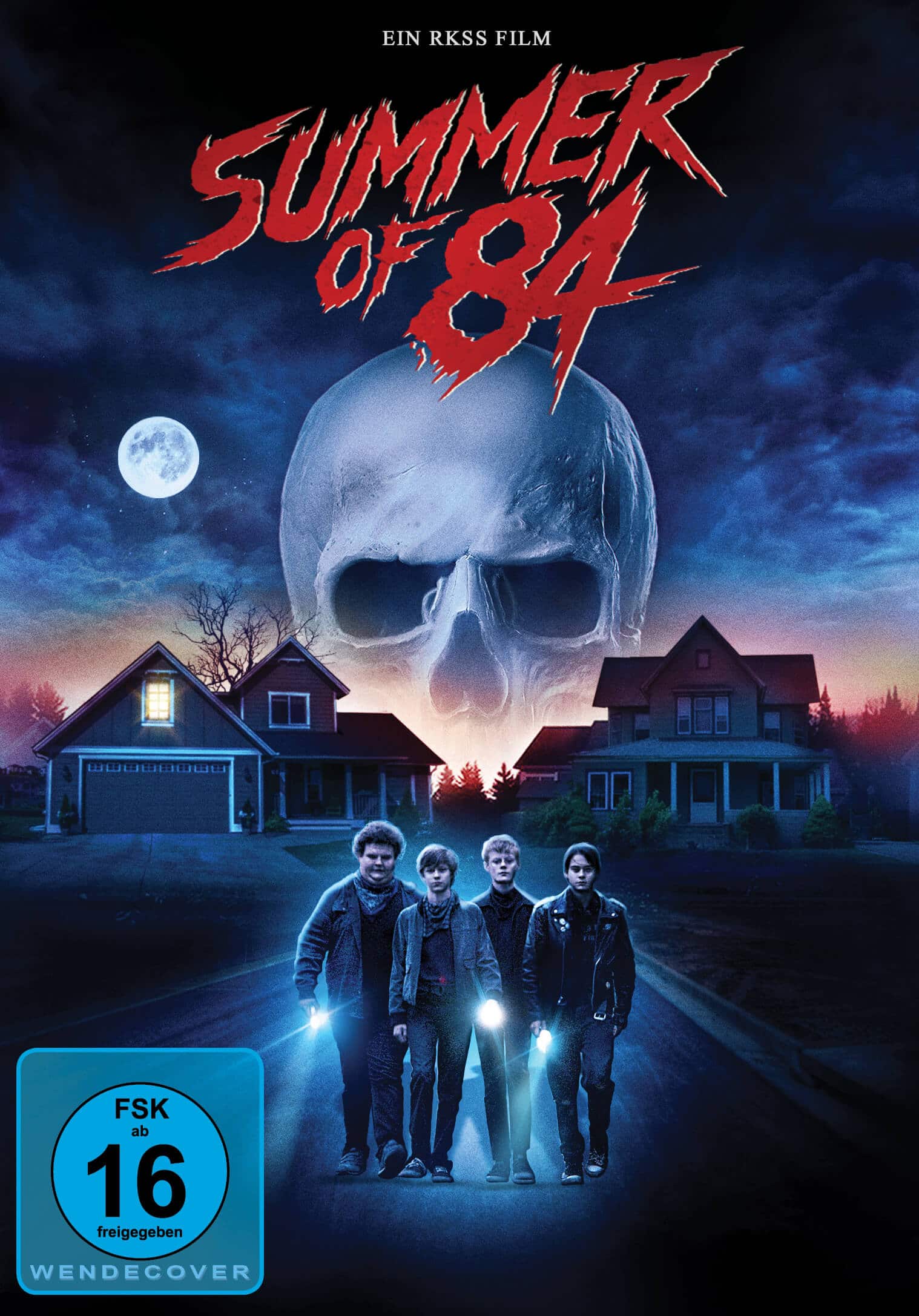 The conceit of 80’s stereotypes is not necessarily the problem either. If the characters were written with more depth, the writers could have easily revealed a deeper nature throughout the course of the film. But the film only slightly nudges that way and never goes far enough to make it completely satisfying.

We only get a glimpse of these teenagers’ private lives and, truthfully, it’s not much. We know that Woody is living with his single and chronically depressed mother, and that he often feels the need to care for her. And when it comes to Curtis, we know nothing about him other than he’s a giant nerd. That’s it.

Davey, the main kid, receives the best treatment. His room is cluttered with newspaper clippings of infamous conspiracy theories, from Roswell to Bigfoot. He is a curious young man, who wants to dive into the inner mechanizations of the world. He is a storyteller in the making.

The saddest example of character lacking depth is Nikki. She basically represents the typical female love-interest character. She has a seemingly romantic attraction to Davey, despite having babysat him a few years before. Nikki feels alienated from her friends, so she starts hanging out with Davey. That’s it for her! The conceit for her character could have worked, but just like the other characters she’s only given the bare bones treatment.

Considering the success the filmmakers had with the romance between The Kid and Apple from Turbo Kid, you would think they could have made it work somehow. But the relationship between Davey and Nikki feels hollow. Any promise it might have had was simply not there.

When it comes to eponymous Cape May Slayer we also receive a lack of information. While it’s not necessary to know the slayers motivation, the tiniest hint of backstory would have made the antagonist more interesting.

The biggest problem, therefore, lay not with the directors but with the script by Matt Leslie and Stephen J. Smith. The problems are not just with the lack of character depth but also in the film’s feuding tone. This tone becomes increasingly evident during the film’s final moments.

Is Wayne Mackey a serial-killer or not? Image via Geekdad.com

The ending for Summer of ’84 will certainly divide people. Even the lukewarm reviews of the film have shown admiration for the film’s unconventional climax. It goes to a few places you wouldn’t expect. The first twist amused me greatly and I audibly exclaimed, “You never see that in this kind of movie!“

But the final twist and eventual wrap-up seems intentionally unsatisfying, and not in a good way like in the Coen Brothers No Country for Old Men. The filmmakers obviously didn’t want this to be just another nostalgia/genre throwback piece, but wanted to make a deeper statement. This could have worked if the elements were properly in place, such as deeper character development or social-commentary.

The ending conveys the film’s problematic tone: is it supposed to be a loyal throwback to 80’s filmmaking or does it want to be something more? Admittedly, it could have been both things! The nostalgic element is the most entertainment aspect of the film. As much as I might love the style of these filmmakers, in the case of Summer of ’84 I needed more substance.

Which is such a shame because I was constantly rooting for this film! I’m the film’s market audience: a lover of the genre, 80’s cinema and Synthwave music. Not to mention that I absolutely adore Turbo Kid and I really wanted this to become another gem. I would have loved it more if it would have been just a nostalgia piece, filled with gory schlock which was a main delicacies of 80’s cinema.

This is a slightly disappointing follow-up from RKSS’s masterful Turbo Kid. While you can still feel the labor of love for 80’s cinema, the film lacks the depth to make it fully satisfying. The film also suffers from a problematic tone. It can’t seem to decide whether it’s a cool throwback to 80’s cinema or a deeper examination of the Reagan era. This could have (and should have) been a great film if the characters were more fleshed-out and if the filmmakers had settled on the tone.

And at the same time. it’s hard to not to fall in love with the characters and the wonderful score by Le Matos. For fans of Synthwave and 80’s, this is still a must see — flaws and all. 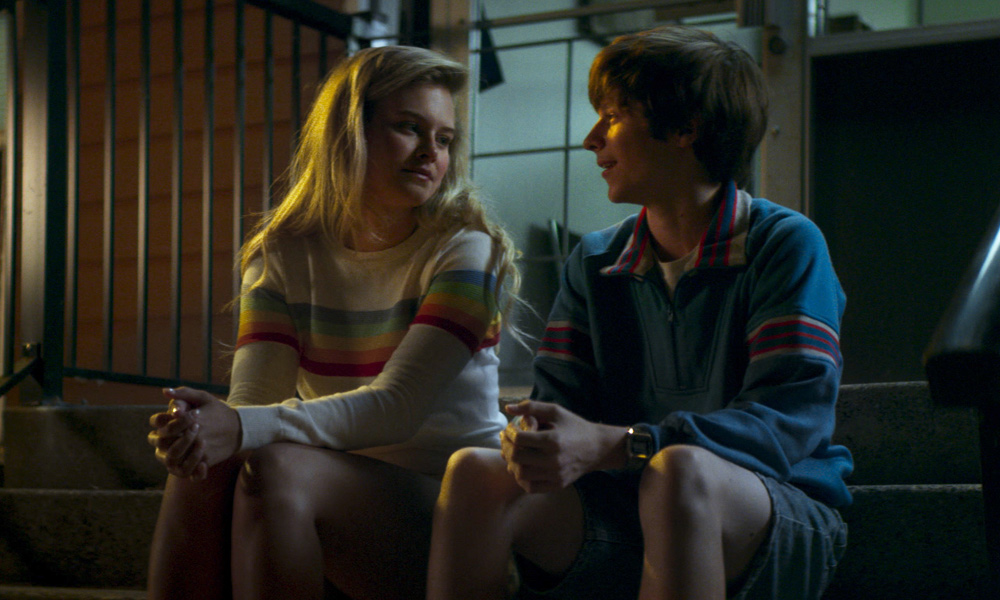 Thank you for reading! What are you thoughts on Summer of 84? Comment down below!

[…] original The Babysitter was a surprisingly odd showdown between Cole (Judah Lewis) and his babysitter Bee (Samara Weaving)’s gang of satan worshipping teens. In The […]

It’s a straightforward and honest movie.

When I first saw this title, I wondered if they were doing an odd reprise of Summer of ’42. But no, completely different movie. Cheers