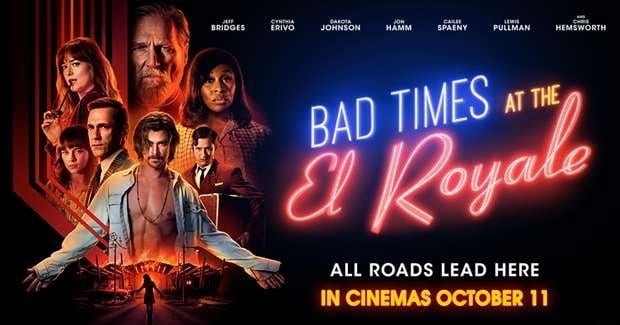 The El Royale is a hotel right on the border between Nevada and California. The hotel has been run down since it lost its gambling license in Nevada, and fewer customers are attracted to its bright, neon doors. However, a priest, a back-up singer, a vacuum salesman, and a hippie all find themselves arriving on the same evening.

The El Royale is not as it seems, and neither are all of its guests. Who has bad intentions? Who’s going to get killed? What is the El Royale really hiding?

The answers to those questions are spoilers, so you’ll have to watch the film to find out.

After Infinity War, this has been my personal most anticipated film of the year. From the first trailer (above) I was hooked. Drew Goddard has had a string of well-written films over the past five years, and so I felt that this film had solid ground from which to spring its higher than normal ambition. Thankfully, I was not disappointed. This film is an amalgam of styles and ideas that weaves them together better than it has any right to.

Sometimes this film is a period-piece, sometimes it’s a Clue remake, other times it’s a Pulp Fiction-esque ensemble. Thankfully, the film hits most, if not all, of its notes. The majority of the cast is used to their full potential without stealing each other’s limelight. Characters feel unique and distinct despite all being introduced around the same time. Some mysteries unravel easily, others unravel thrillingly. What this film shines most in is its balance between the motley crew of elements coming together inside of it.

Perhaps the most ambitious aspect of this movie is the A-list cast. In particular, Jeff Bridges, Chris Hemsworth, Jon Hamm, and Dakota Johnson are some of the most in demand actors in Hollywood presently. Even if they are balanced out with relative newcomers to the A-list; Cynthia Erivo, Cailee Spaeny, and Lewis Pullman.

Normally, this many “big name” actors in a single film is bad. This is generally the case because the use of this many “big” actors helps the audience identify the characters by popularity rather than character development. Take Hotel Artemis, for example. This film relies heavily on the fact that you won’t remember it’s character’s names, but you will recognize the cast. Recognizable stars such as Jeff Goldblum, Dave Bautista, Sterling K. Brown, and the legendary Jodie Foster are used for their star power. The addition of recognizable and bankable stars typically leads to some poorly written and underwhelming characters. However, Bad Times at the El Royale manages to give each of its distinct characters their due.

Not only are the characters distinct from one another, but they each have room to grow in a crowded landscape. Some grow more than others, yes, but none of these characters feel like loose ends that need tying. That being said, some of these characters are a little underwhelming in context of the central story and conflict. However, this is a rather small note compared to the charm and sincerity that the actors bring to their roles. 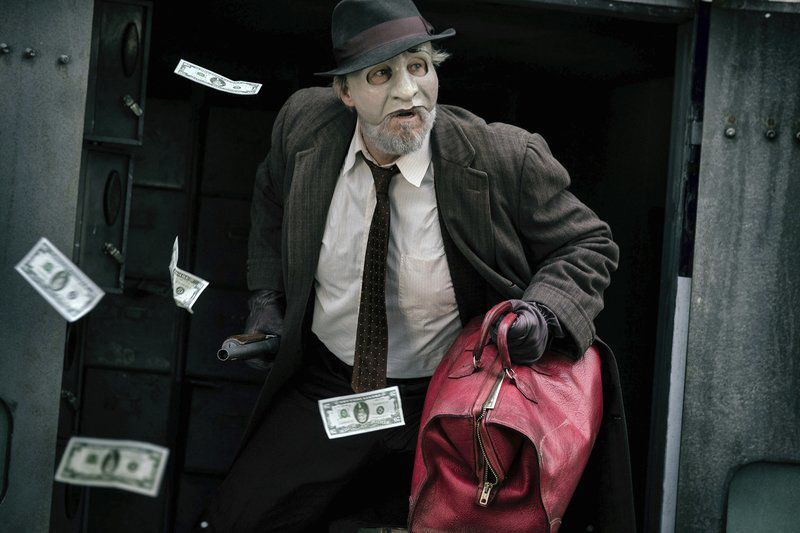 Image via the Salem News

This film does not cleanly fit into a single genre. Much like Pulp Fiction, Bad Times at the El Royale fits into several. The film is part thriller, part mystery, part action, and part drama. There’s a little bit of everything blended into the mix. This works particularly well for the film as it is divided into distinctly titled segments, borrowing the staple framework of Quentin Tarantino. In fact, this film almost feels like a love-letter to the director, gushing especially over the aforementioned Pulp Fiction and The Hateful Eight.

Despite the clear influence of Tarantino, Bad Times at the El Royale still manages to be unique and a beast of its own. While there are clear cinematic influences from almost everywhere, the film manages to be something fresh. Perhaps this is where the film shines brightest. It is an amalgam of dozens of other movies, but it does not lose itself among them. Rather, by nodding to specific other films and genres, this film gives itself a pleasant sense of ambiguity. It is hard to nail down exactly what this movie is and what it is about. You can pinpoint topics such as racism, PTSD, and good old-fashioned revenge, but none of those thematic designations can encompass the entire story, much less the entire film. Bad Times at the El Royale borrows from everywhere to create something fresh. 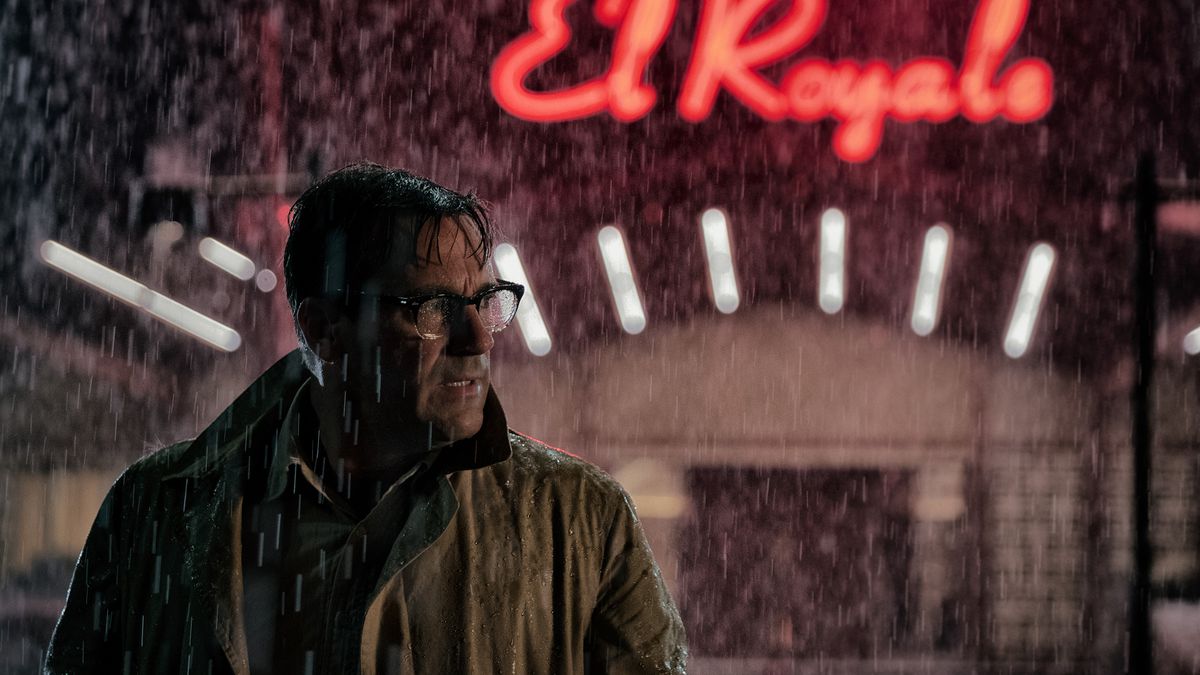 Bad Times at the El Royale is no place for a priest, but that doesn’t mean that it pushes the envelope too far. Rather, the film finds balance in pushing the envelope just far enough to double down on its surprises and shock the audience in a way that any good thriller should. Deaths come suddenly and brutally, but not extremely graphically. The action feels intense and violent, but not to the point of being overly gory.

Director Drew Goddard is clearly able to take risks with the film, but doesn’t do so at the expense of the overall story and tone. The director takes risks when it comes to character development and narrative. Unlike his influence, Quentin Tarantino, Goddard does not use this as an excuse to push the violence a step too far. (This isn’t a discredit to Tarantino, but is an issue that comes to discussion with each of his films.) The result of envelope pushing is a satisfying thriller-mystery that leaves you wanting more.

While Bad Times at the El Royale’s narrative is similar to Pulp Fiction, it shares tone and style with an emerging sub-classification of film. This sub-classification does not yet have a name to the best of my knowledge. Thus, in the name of MovieBabble, I will classify it here. This sub-genre is what makes Guardians of the Galaxy and Baby Driver stand out. It is what Suicide Squad tried to copy, and it is what has once again been utilized well in Bad Times at the El Royale.

The sub-genre of which I’m speaking is that of the Whimsical-Realism that is found in the Guardians of the Galaxy films and Baby Driver. And by Whimsical-Realism, I mean the balance that these films strike between what is “real” in their narrative worlds and the absurdity or surreal nature of the film’s events. These films feature down-to-Earth characters that typically have tragic backstories and noticeable personality flaws and/or disabilities. These characters have a firmly established place within their narrative world, but also seem to be able to slightly bend its rules and live somewhat outside of it. Peter Quill and “Baby” fit into this mold, as do about half of the characters in Bad Times at the El Royale.

This approach to character is the first main distinction of Whimsical-Realism, but there is one other major distinction between these films and others like them: the soundtrack.

Having a great soundtrack in a movie is nothing new. However, the films discussed above utilize soundtracks in a way that is fairly new, and far more uncommon. Instead of the soundtrack augmenting the film, as is typical of any non-musical soundtrack, these films are driven by the soundtrack. While this is typically found in musicals, which use singing and legitimate musical numbers, whimsical-realist films use music organically in the environment of their films.

Bad Times at the El Royale is no exception to this. By using a soundtrack that draws solely from the tracks of the 1950s-60s, the film builds its own unique atmosphere. The music drives the story at several points and the combination of the Isley Brothers and murders is quite original to say the least. The film’s soundtrack is used so that it feels like a character of its own, interacting with and reacting to each of the characters in their own way. Thus, the thriller has a greater sense of whimsy amidst its more dramatic elements. Bad Times at the El Royale is not without its flaws, but those flaws feel nearly insignificant in contrast to the film’s overall quality. The film is good, and in my opinion it may even be great. However, it is definitely not a film for universal appeal. If Chris Hemsworth, thrillers, or a good mystery are your thing, then you’re in luck. If none of those appeal to you, then you will still enjoy it, just not to the same degree.

Drew Goddard is the real star here, proving that Cabin in the Woods isn’t a fluke. Bad Times at the El Royale cements his career as one to watch.

Thank you for reading! What did you think about Bad Times at the El Royale? Comment down below!

I also had a great time at El Royale! And thanks for your thorough review, I enjoyed reading it!

My two cents on the movie can be found here, if you are curious (I also commented on the killer soundtrack, of course!):

Sounds like fun. I’m looking forward to seeing it.