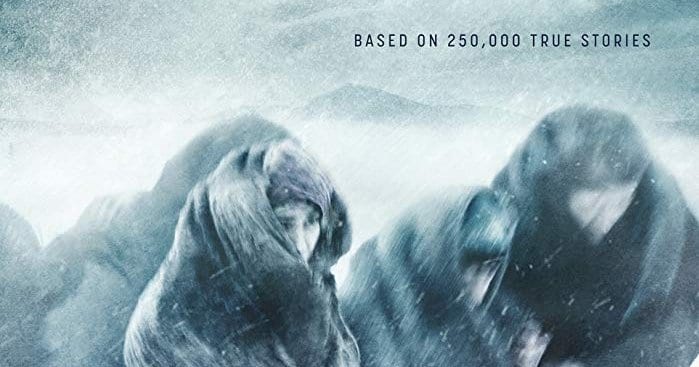 Eternal Winter will be playing at the Denver Film Festival from October 31st to November 11th. Head over to the DFF’s website to purchase your tickets!

One of the films being shown at the Denver Film Festival is Eternal Winter, a Hungarian drama set in World War Two era Siberia. And as you might expect from such a heavy setup, it is a powerful, engrossing motion picture.

Eternal Winter begins in 1944 in Hungary, when Soviet soldiers round up Irén (Gera) and other women of her village and deport them to Siberia as forced labor. This is because they are Swabians, a German-speaking minority in Hungary, so the Russians act as if they are complicit in Nazism. In a labor camp in Siberia, they work in a coal mine and endure brutal conditions. Irén meets Rajmund, a fellow prisoner, and they form a close bond over time.

This is Attila Szasz’s first feature film for cinematic release, though he has directed two TV movies previously, as well as a short film and TV commercials. Eternal Winter was released in Hungary on February 25th, 2018, and it has already screened at ten film festivals before opening in Denver.

This story is based in historical fact. As the Soviet army advanced, they began to harass and deport the German-speaking minorities in Hungary and other nearby countries, tarring them all with the same brush as the Nazi party. This was not entirely unfounded, as a National Socialist German party was formed in Hungary in 1938, and many ethnic Germans ended up in military units raised or controlled by the Third Reich, including the Waffen SS. The Communists made a scapegoat of the Swabian community in Hungary. They deported thousands to Siberian labor camps, including regular civilians, citing security concerns. After the war, there was a concerted effort to rid the country of the ethnic German population, and thousands left for Germany and elsewhere.

The work of Alexander Solzhenitsyn describes life in a Gulag. In Eternal Winter these details come to horrifying life. The labor is heavy and food is scarce. For those who don’t meet their quota, food won’t be provided at all. Retaliation for any wrongdoing is harsh. Hygiene is minimal. Medicine is scarcely provided, as illustrated by the nightmarish ‘transit room’. It is always cold. So it seems that nothing good can happen here. The atmosphere of the film reflects this — colors are muted and stark, and the constant chill almost seeps through the screen. The characters have little to say to one another, as they focus on the constant struggle to survive. It’s a bleak and barren environment with no escape, as hungry wolves outside wait to pick off the weak.

About halfway through the film, Irén (Marina Gera) and Rajmund (Sándor Csányi) have a conversation in which he advises her not to dream. Rajmund states that dreaming will kill you. Irén disagrees, and insists that faith and hope are vital. Yet shortly after this she discovers that the end of the war will not mean their release, and it seems that they will never be allowed to go home. So this is a gut-wrenching moment for her. Her parents, her daughter, and her husband, appear in her dreams, and she starts to understand what Rajmund is trying to tell her. That sort of hope ends in madness.

Rajmund has carved out a place for himself, trading for what he needs to survive and living one day at a time. Irén tries to stop dreaming about her lost family and follow Rajmund’s example. So the moment when she tears out the pages of the Bible to roll cigarettes is symbolic,  and signals Irén’s turning away from her dreams of returning home.

The film uses incidental music sparingly. What is used is mostly atonal, wind-like calls that underpin quieter moments, evocative of the ever-present winter. Much of the film is without music and this makes other sounds, words of desperation and cries of despair, the crunch of footsteps on snow, the clatter of shovels against coal, seem even louder. Every sound evokes struggle and desperation.

And Yet, There is Hope

While Irén does become harder as a necessity to survive in her environment, she never loses dignity. She learns to be less generous, but not to the point of cruelty. She learns to live in the moment without losing herself in the process.

Eternal Winter shines a light on a little-known tragic story of Soviet Europe in the war and post-war years. It is also a poignant story of human endurance under appalling circumstances. It is beautifully directed, scripted, and acted. I strongly recommend Eternal Winter as one of the finer examples of world cinema this year.

Thank you for reading! What are your thoughts on Eternal Winter? Comment down below!