Why the Wicked Witch is the Best Villain of All Time 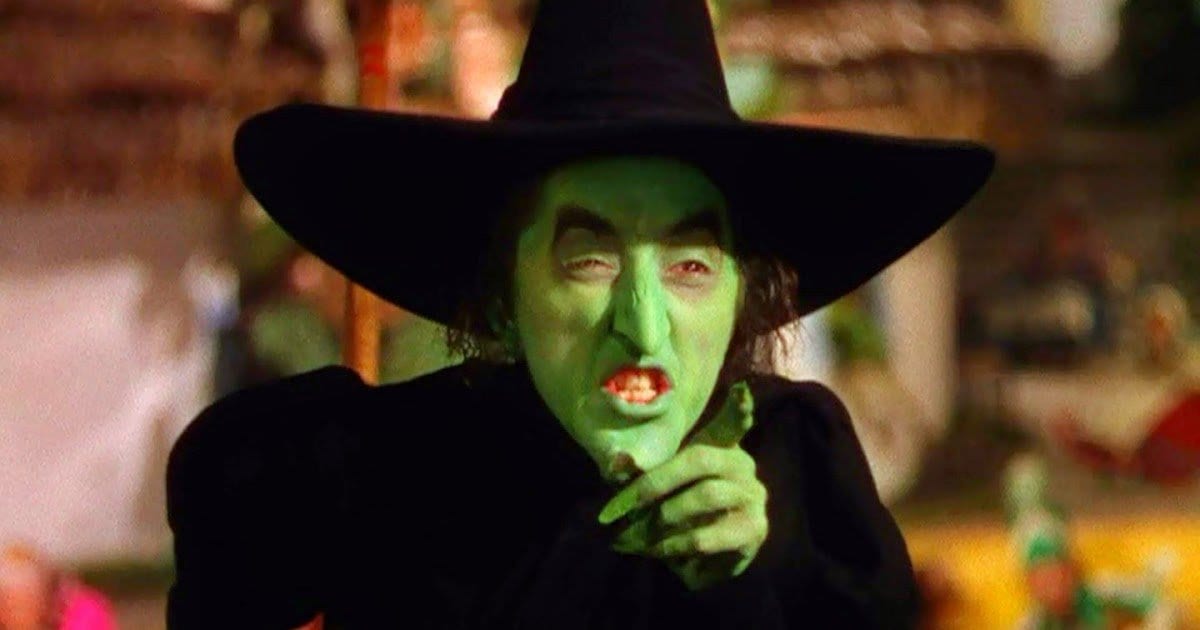 For some people, The Wizard of Oz is all about the timeless characters. For others, it’s the classic songs. And for many, it’s a green menace who left generations of kids with nightmares. The Wicked Witch of the West is one of the scariest villains in cinema. The American Film Institute has listed her among the top five bad guys of all time. But why has she frightened and intrigued us for eighty years?

Black, Green, and Mean All Over

It’s hard to believe that the Witch’s iconic look wasn’t planned from the start. Her initial design was based on the glamorous Wicked Queen from Disney’s Snow White. Producer Mervyn LeRoy even cast screen siren Gale Sondergaard for the role. Someone later convinced him that bad witches should be ugly. Sondergaard left after some failed attempts to ugly her up, so LeRoy cast Margaret Hamilton in her place. Hamilton, well, she wasn’t exactly a spring chicken to begin with. But with some extremely effective makeup enhancements, she more than looked the part! The sickly green skin, pointed chin and nose, and midnight black robes peg her as a monster in the otherwise colorful Land of Oz. 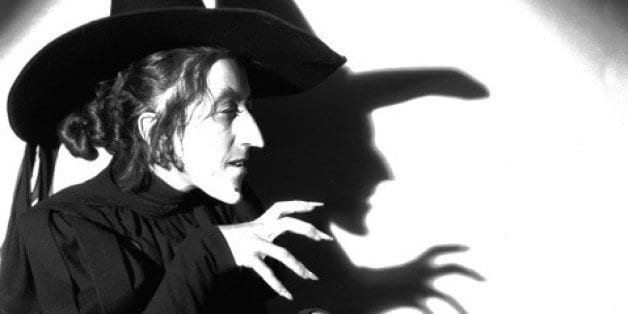 Let’s be honest, the role of the Wicked Witch isn’t exactly Lady Macbeth. She throws subtlety to the wind to cackle and shriek, and there’s little motivating her other than gaining more power with the ruby slippers. Yet it’s how Margaret Hamilton carries it out that makes her an iconic villain. Her menacing presence lingers even when she’s off-screen. She’s either calculating her next move or reveling in her dark deeds. Hamilton’s shrill voice could break glass, especially when she laughs.

Her performance had ramifications felt as far back as the preview screenings (yes, they had those back then). Some of her scenes were cut due to how much she scared the children and even some of the adults! Regardless of the hundreds of kids who screamed in terror on recognizing her, Hamilton had no regrets about being forever associated with her mean green role. However she suggested that children under five should wait to watch the movie, and made appearances on Mr. Rogers’ Neighborhood and Sesame Street to show that the Witch was only a part she played.

Through the Fire and Flames

I’d kick myself if I didn’t mention how Hamilton was so dedicated to her role that she risked her life for it. There are many disaster stories about the filming of The Wizard of Oz, but this is one of the darker ones. When The Wicked Witch leaves Munchkinland in a burst of flames, she’s lowered on a platform seconds before the fire shoots up. The timing was off on one take, resulting in Hamilton nearly burning to death. In spite of the trauma, she refused to call it quits. She only insisted that her double film any scenes that involved smoke or flames. I don’t blame her a bit for that. I have nothing but respect for Hamilton for soldiering on through the pain. 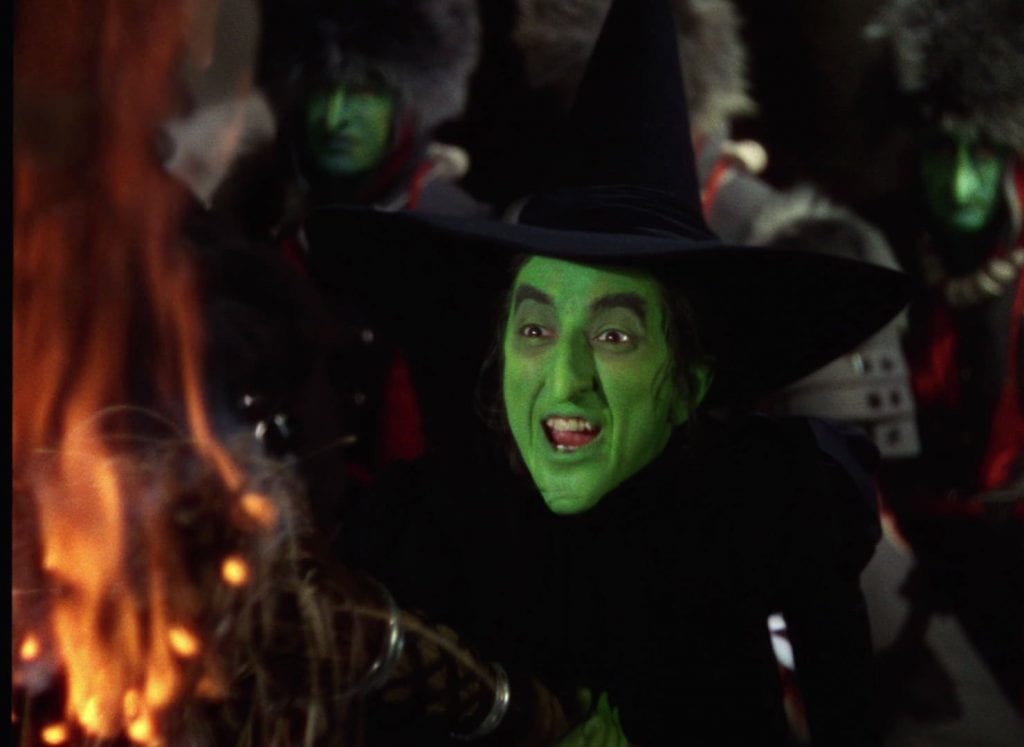 The Wicked Witch is one of only a handful of villains to come dangerously close to winning. She has magic, armies and winged monkeys at her command. For each scheme she concocts, there’s a backup plan. And unlike her book counterpart, the Witch goes out of her way to torment Dorothy herself. She only loses due to intervention from Glinda or a splash of water at the last second. The Wicked Witch is a dangerous combination of power and wit. Sometimes it’s hard not to root for her instead of Dorothy! 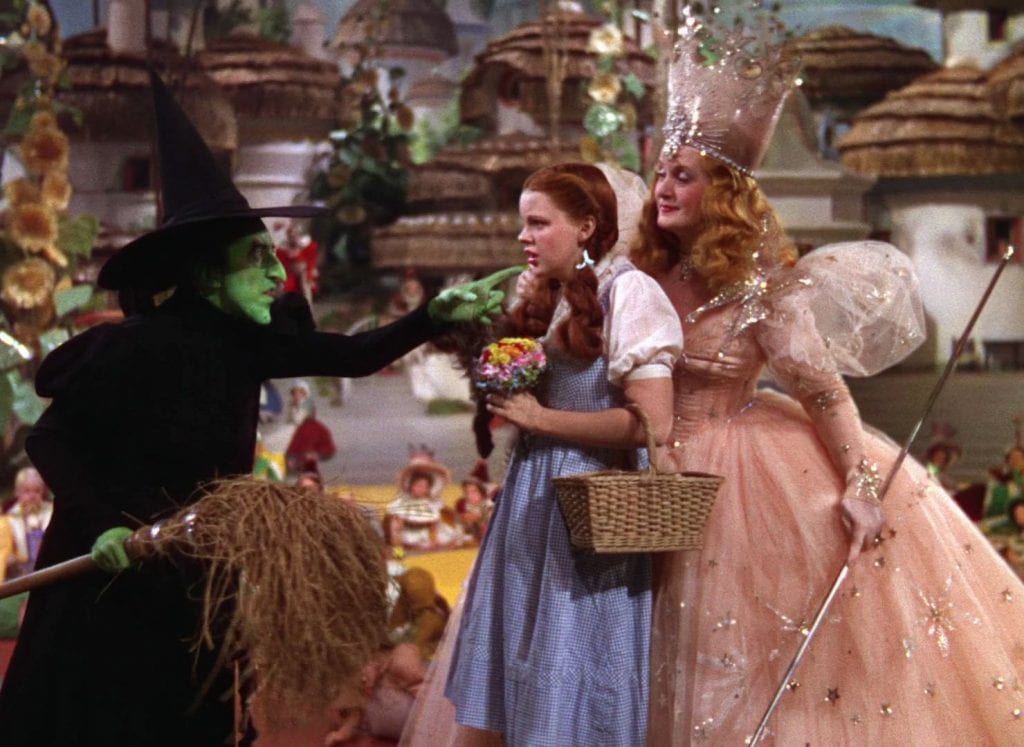 She’ll Get You, My Pretty!

Still convinced that The Witch is your average kid’s movie bad guy? Well, what marks a great antagonist often comes down to a single moment; a moment that isn’t necessary, but goes the extra mile in proving how beyond redemption they are. You’ll know it when you’re chilled to the bone when it’s done. It’s scenes like Maleficent tormenting a captured Prince Philip in Sleeping Beauty, or Scar telling Simba he can never go home after Mufasa’s death, or Mother’s monologue at the end of Psycho. The Wizard of Oz has that moment as well, and it’s a powerful one.

With Dorothy trapped in her castle, the Witch tries to take back the ruby slippers. Unfortunately she can’t touch them without getting an electric shock. She curses her own foolishness, but it turns into dangerous cunning as she realizes “Those slippers will never come off…as long as you’re alive.” She flips over an hourglass filled with blood-red sand and leaves Dorothy that much time to make peace with her maker. All the poor girl can do now is wait as death inches closer by the minute.

While Dorothy cries for Aunt Em, the crystal ball begins to glow and change colors until the image of Aunt Em appears, calling out for Dorothy as she searches for her. Dorothy, even though she knows she can’t hear her, helplessly screams back as Aunt Em fades away…into the face of the Witch, who throws her pitiful tears back in her face.

This is the reason why the Wicked Witch is one of the greatest villains of all time. It’s not just her look, cackle, or her intense dedication towards stealing a pair of shoes. It’s how ruthless she is. She isn’t content with killing you on the spot, she wants to see you writhing in terror before she delivers the coup de grace. Look at how she tackles Dorothy on the yellow brick road and at the Emerald City. When the trees didn’t work, she went after the only friends she had who could protect her. When Dorothy made it to the Emerald City, the Witch showed up to remind her that she still wasn’t safe. Rather than rely solely on physical intimidation, the Witch psychologically torments Dorothy, reminding her she is always there. Always watching. Always knowing. And she enjoys every second of it.

That fear also extends to the audience at this point; not only does she laugh at Dorothy, but she turns and screeches right at us. It’s the one moment where it seems that even we’re not safe from her wrath. 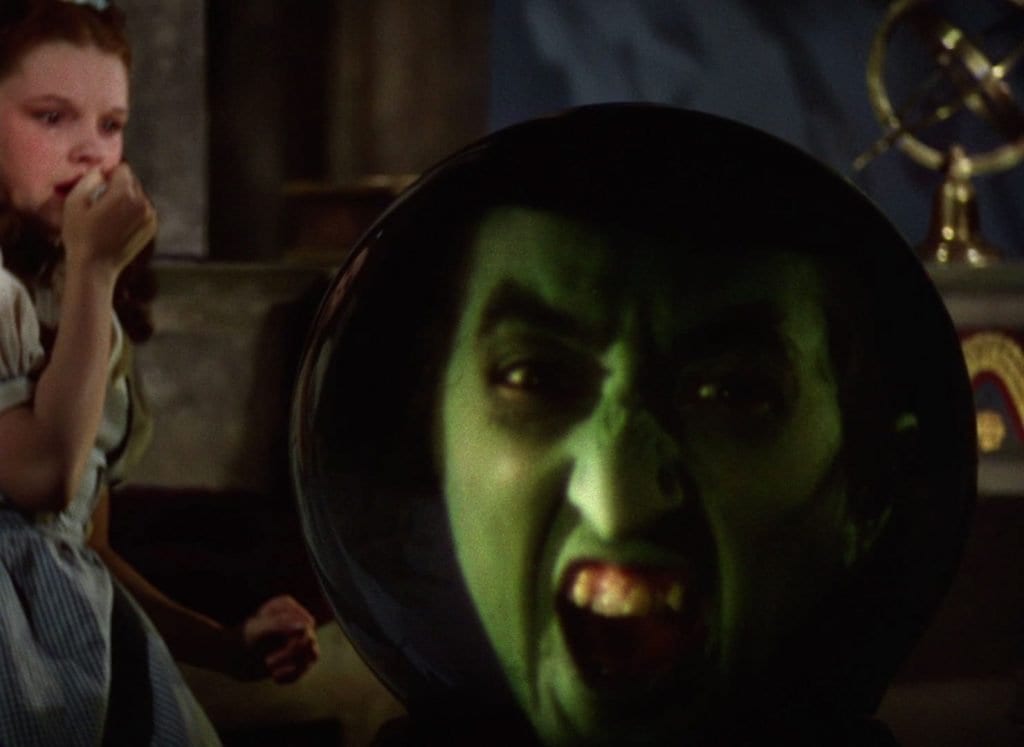 When Fears Melt Away

The Wicked Witch is a perfect personification of childhood fears; a sadistic stranger who takes pleasure in pain and terror. But If I may paraphrase G.K. Chesterton, the Witch isn’t there to show that witches exist, but that they can be melted. To me The Wicked Witch represents a rite of passage for children. If they can handle her, then they can survive much more the world has to offer. After all, once we grow up we learn that there are scarier things out there than green meanies on brooms. It’s fun to look back and remember how scared we once were. And once those fears subside, we appreciate all the hard work that was put into stirring up those emotions. I hope the next generation will fear her as we have.

Thanks for reading!  Do you think the Wicked Witch is still scary?  Comment down below!

Actually if you’re going kid friendly movies Bill Sikes from Oliver! could give this witch a run for her money. He exploits little Oliver for his own gain, murders his own fiancee Nancy as she tries to reunite Oliver with kindly Mr Brownlow, and even threatens petty crook Fagin a few times. Mr Bumble was a bit of tyrant himself, I was scared more by his tenor voice than appearance. Harry Secombe learned tenor well.

[…] to define a wicked problem. But stay with me, this is not a digression. As Jen Seggio defends on her spotless character analysis, “the Wicked Witch represents a rite of passage for children. If they can handle her, […]

[…] mine) while owning a company that has a team that participates in FAB? Fishy! He is, of course, the villain. Now, I wonder why Mongoose, which is a huge brand to this day, allowed themselves to be the […]

I enjoyed your insightful commentary!