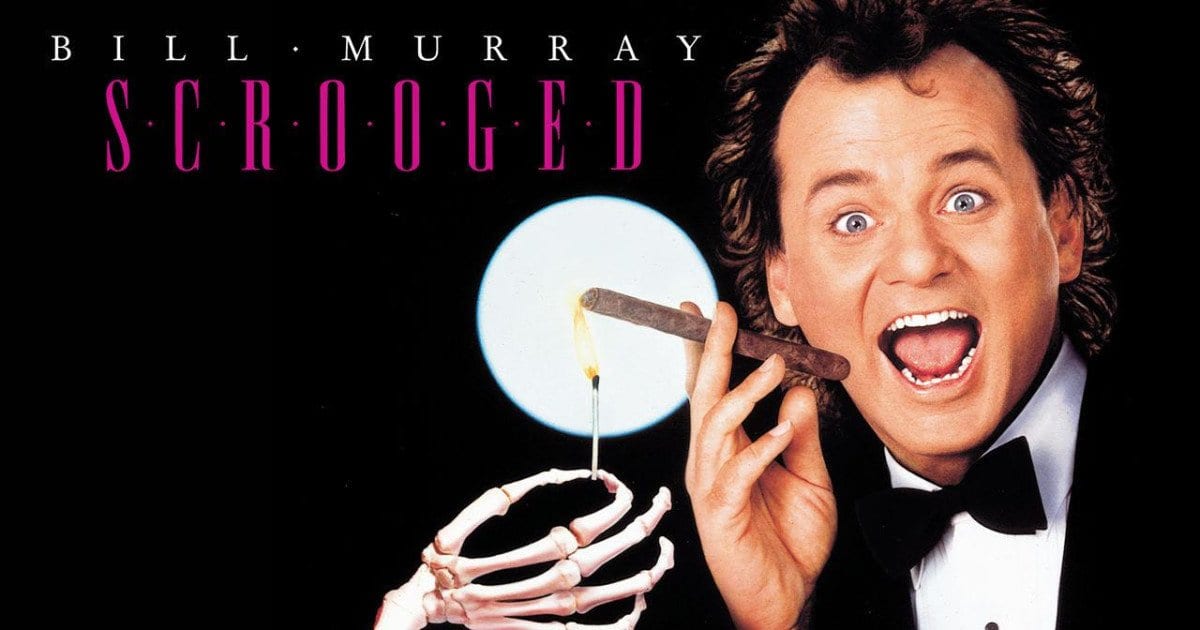 In 1984, Bill Murray took a long four-year break from acting after his success in Ghostbusters. His big return saw him facing down some very different ghosts — those of the Dickensian sort. Directed by Richard Donner of Superman and Lethal Weapon fame, Scrooged moves A Christmas Carol from the Victorian era to late 80’s New York. Frank Cross, a corrupt television executive, is in dire need of some Christmas spirit. The very ghosts starring in his live production of Dickens’ story come to haunt Frank and show him the error of his ways. It’s dark, mean-spirited, and very, very funny.

Scrooged is the textbook example of how to play with a story everyone knows. It doesn’t just transpose everything to a modern setting. It subverts expectations when it comes to characters. When Frank fires timid underling Elliot Loudermilk (Bobcat Goldthwait), we assume Loudermilk will take up the role of kindly Bob Cratchit. It’s not until we meet Frank’s put-upon secretary (Alfre Woodard) and her son do we realize we’ve been had. After Frank emerges from his experiences, he vows to share what he’s learned with the world — and he does by interrupting his broadcast at gunpoint. He’s still abrasive and pushes his power around, but for good intentions.

The Ghosts are unlike any from past adaptations. Waif spirits, jolly giants and grim reapers are now Brooklyn cabbies, deranged sugarplum fairies and faceless screens. In one unforgettable moment, Frank panics when he comes face to face with the traditional depiction of the Ghost of Christmas Future — only to learn, in a humorous twist, that it’s only the actor playing the Ghost in the special. This makes his run-in with the real Ghost shortly after even more funny and frightening.

Perhaps the biggest subversion of all is how meta this Christmas Carol is. For one thing, it plays out concurrent with a performance of the original story. Frank is aware of what story he’s in. When he doubts a look into his past will change him, his Ghost replies it worked for Attila the Hun, implying that the spirits have always existed. One could argue he was only joking; however any debate as to whether Frank is dreaming or not halts in the finale when Claire hitches a ride in Christmas Past’s taxi. So perhaps in this movie’s world, Dickens encountered the ghosts and recorded it under the guise of fiction. A Cast of Incomparable Character Actors

If Donner cast A-list celebrities along with Murray, it would have been too distracting. In a wise move, he fills the entire cast with charming, recognizable character actors. Murray’s siblings — Joel, Brian and John — all make cameos. There are appearances by Buddy Hackett, Lee Majors, Robert Goulet, and Anne Ramsey in her last film role. Bobcat Goldthwaith utilizes his raging 80’s shtick to hilarious effect.

The talent behind Frank’s supernatural guides gives them new life. John Forsythe makes a memorable appearance as the Jacob Marley of the feature, Frank’s mummified former mentor. David Johansen (aka Buster Poindexter) riffs through his part as the Ghost of Christmas Past, though for my money the best ghost is Carol Kane. She plays the spirit of Christmas Present like an insane, Three Stooges-obsessed Glinda the Good Witch. Her chipper attitude compounded with her expertly timed physical comedy make for some of the movie’s biggest laughs; though Murray later complained that the violence she inflicted on him was in fact real.

I feel special mention should also be made for the Belle of this picture, Karen Allen. Her chemistry with Bill Murray is off the charts. It’s good enough that, in another subversion of the original Christmas Carol, Frank reunites with her in the end. Between him, Harrison Ford, and Jeff Bridges, was there any man in the 80’s she didn’t charm? 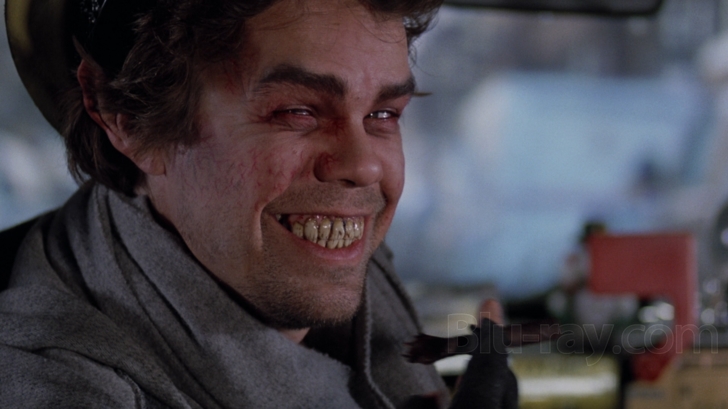 Past, Present, and Future Intertwined

When you look at Scrooged, it’s fun to see how much has changed — and what hasn’t. The idea of a star-studded live broadcast of A Christmas Carol must seem cheesy to even 80’s audiences. Now we have NBC’s annual live musical extravaganzas to thank for reviving the format. Frank’s boss’ idea of a programming block dedicated to cats doesn’t seem so farfetched with the internet’s addiction to felines.

On the flip side, Frank’s commercial plays out like a modern sensationalist news ad (Rupert Murdoch must have been paying attention). Then there’s Loudermilk barging into his office with a shotgun to extract bloody vengeance. Later, when Frank restores his position, he holds the station hostage in order let his message of yuletide selflessness go uninterrupted. With the worryingly increasing number of yearly shootings, it paints another thick layer of black on to this dark comedy.

Oh, and there’s also a jab at Trump Tower thrown in. Make what you will of that. 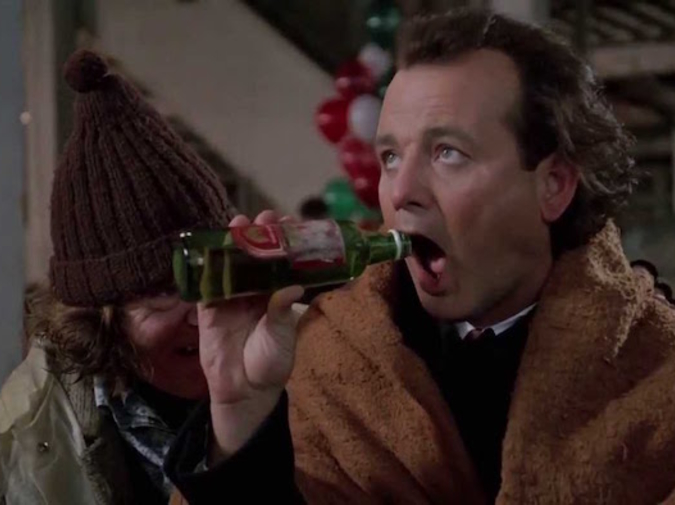 The Love We Found

For all its cynicism, Scrooged still clings tightly to its predecessors’ powerful message of redemption and compassion; the very reason why A Christmas Carol has been adapted so many times over the years. The scene that exemplifies this is Frank’s final speech. Murray’s spirited, largely improvised rambling drives home how genuine Frank’s transformation is. His over-the-top passion makes what he espouses about reaching out to others this time of year is no less true. It isn’t about acting nice to prevent a fiery fate, it’s about rediscovering the good within yourself and those around you by making that extra effort. Hostile station takeovers aside, I was nearly moved to tears on my first viewing.

Scrooged has a heart black as coal but as warm as an open fire. If you want further proof, look no further than the theme song. Instead of a traditional holiday tune, it’s Annie Lennox and Al Green reminding you to “Put A Little Love In Your Heart.” This holiday season, I recommend doing so.

Thanks for reading!  What’s your favorite version of A Christmas Carol?  Comment down below!

I enjoyed Scrooged. Weird, but fun. I don’t think I could choose a favourite adaptation of A Christmas Carol, though, as there have been several excellent adaptations.

I am so glad you included the music video at the end, because that song started in my head when I opened the article.

“For one thing, it plays out concurrent with a performance of the original story. Frank is aware of what story he’s in.” No, I don’t think he is. He never seems to anticipate what’s going to happen or compares it to the source material, unlike some versions I’ve seen.
Probably the biggest weakness in the film is Christmas Future. in Dickens, Scrooge dies alone and even his burial sheet is stolen away from him. In Scrooged all that happens (other than Karen Allen turning bad) is that he just … dies. That’s disappointing.
It’s still a fun film.

Anything with Karen Allen in it has me affixed to the screen!

But even besides her, this film was better than my expectations! And Robert Mitchum? Wasn’t expecting to see him!