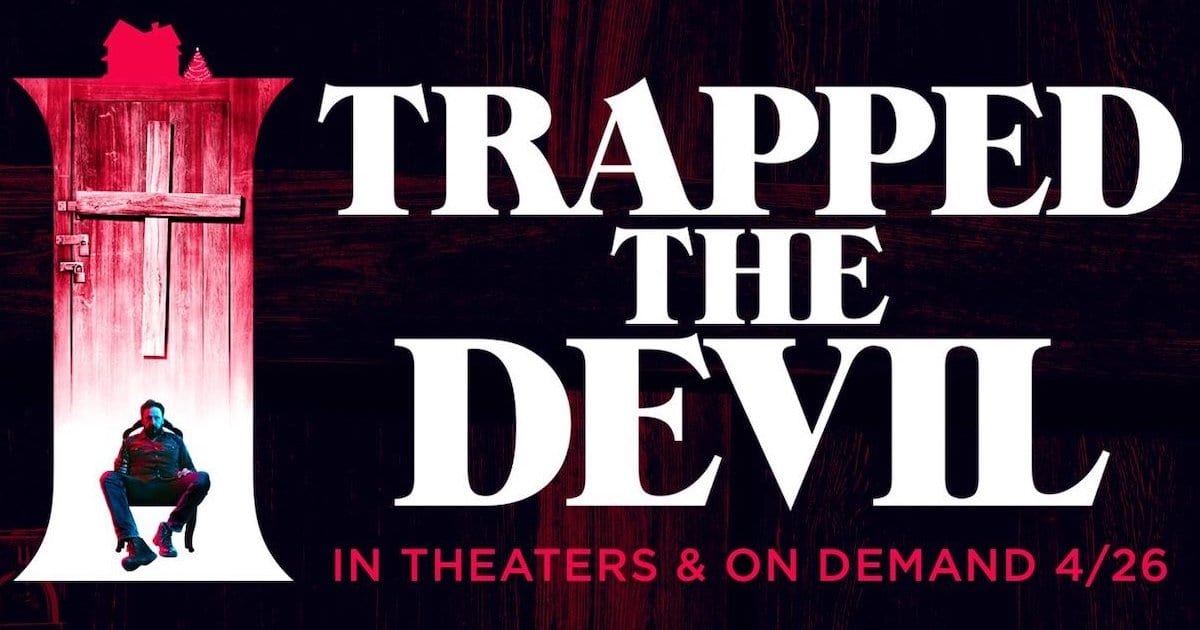 With a title like ”I Trapped the Devil”, you know it’s not going to be a romantic comedy. It will either be some low-budget, generic horror film or a low-budget horror movie gem. In either case, it’s a title that peaked my demented interests.

This week, as an experiment, I decided to just choose a movie to review without reading any reviews or trailers. This could very well turn out to be a disaster.

But it could also be surprising revelation. Untarnished by any reviews or expectations, what was the eventual result? Was it a surprise gem or a complete waste of time?

In the opening, two police-officers (John Marrott and Rowan Russell), are barging inside a house. Inside are signs of some sort of domestic disturbance…

We move back to what happened inside the house. Taking place during the holidays, Matt (AJ Bowen) and his wife, Karen (Susan Burke), are visiting Matt’s estranged brother Steve (Scott Poythress). Steve has become somewhat of a recluse after some undisclosed tragedy. The brothers haven’t seen each other in nearly two years. Steve firsts asks the couple to leave but both Matt and Karen are adamant to spent time with him, fearing that he might be suffering some dangerous mental instability.

When Steve becomes more comfortable with their presence, he reveals something disturbing: he has kidnapped and trapped a man behind a door in his basement, which is locked by giant wooden cross. The sound this kidnapped man makes sounds human. He pleads for them to open the door so that he can be reunited with his family.

Karen’s initial instinct is to call the authorities but Matt is against it, as he worries about the penal repercussions of Steve’s actions. In truth, Matt is actually inspired by the guilt he feels for not being there for Steve during his time of need.

But there is something ominous about the mysterious person in the basement. Even Karen’s pragmatic stance weakens the more she communicates with the person behind the basement door. Steve meanwhile becomes increasingly paranoid, receiving ominous phone calls which he considers to be a sign of some demonic force coming to release the devil inside his basement…. 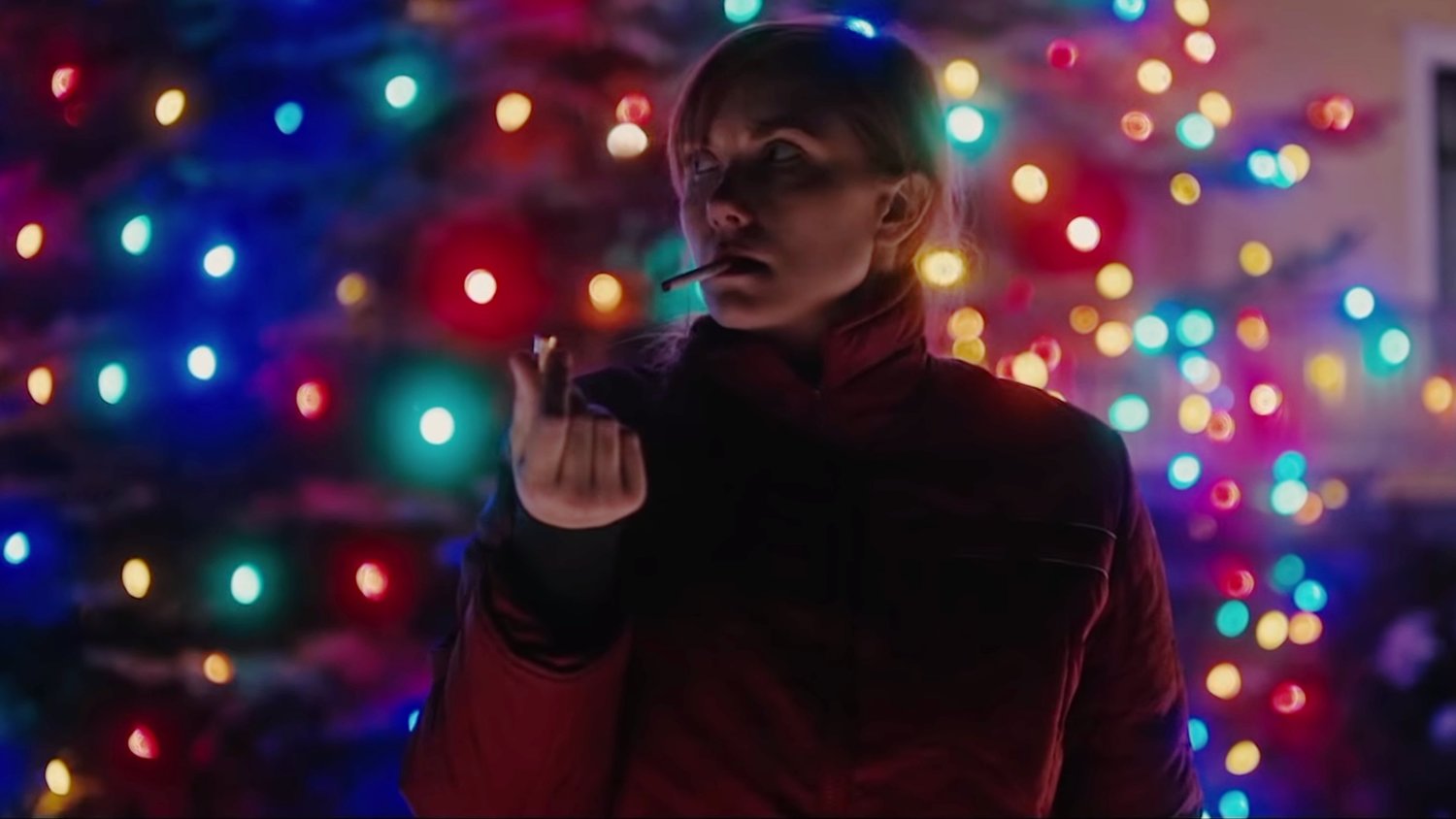 This is Josh Lobo’s feature film debut, a film he both wrote and directed. It’s obvious that the screenplay was tailored to a low-budget. Everything is low-key: a small cast of three principal characters with everything being set in one house. This is a filmmaker doing the best with his limited resources and it’s obvious that Lobo has a good visual eye. The cinematography is probably the film’s strongest aspect, aiding to much of the doom-filled atmosphere that fills the film.

Lobo didn’t want this to be a horror film filled with cheap thrills. If you’re hoping for any gratuitous gore, then look elsewhere. If you’re looking for jump scares, look elsewhere as well. This is all about atmosphere, that slowly but surely becomes worse. It’s a film that builds up to something — though admittedly, the ending isn’t really satisfying.

Yet the background behind this film explains a lot. Apparently I Trapped the Devil was filmed within a mere nine days. There was an improvisational nature to the shooting of certain scenes. Even with my severely limited experience in filmmaking, I know this is incredibly fast.

So considering its extreme low-budget and seeing what Lobo was going for, I absolutely commend the film’s ambition. It does not however, excuse the film’s many narrative flaws. 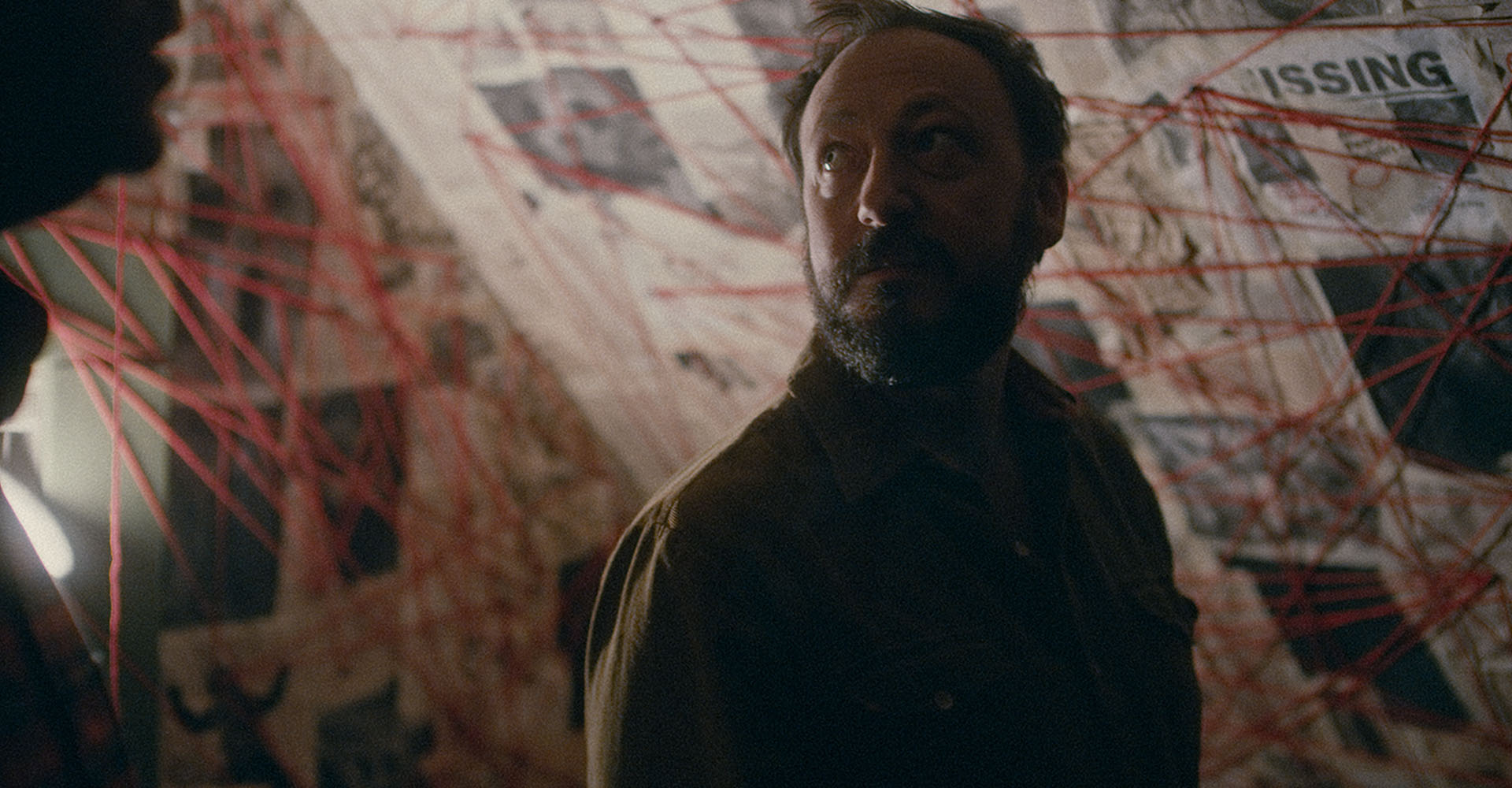 Is Steve (Scott Poythress) really crazy or did he really trap the devil beneath his cellar? Image via Yellow Veil Pictures

The acting is serviceable, sometimes excellent — the best performance comes from Steve Poythress, who has admittedly more to work with. Yet, at times, it admittedly feels a little amateurish. Perhaps this is due to the staging of scenes, at times the character interplay just doesn’t feel natural.

I don’t think the problem had much to do with the actors. They do their best but they don’t have that much to work with. There’s no instance of memorable dialogue. The best bit of dialogue comes when Steve explains his theories about the devil and the nature of evil, which is also one of the most interesting scenes in I Trapped the Devil. The scene in which Karen and Matt discuss their dilemma lacks the urgency you would need in a scene like this.

Most of the time, it seems Lobo is more interested in the atmosphere than the human drama and that’s a shame. It’s also hard to care about the characters when they do some incredibly stupid things… 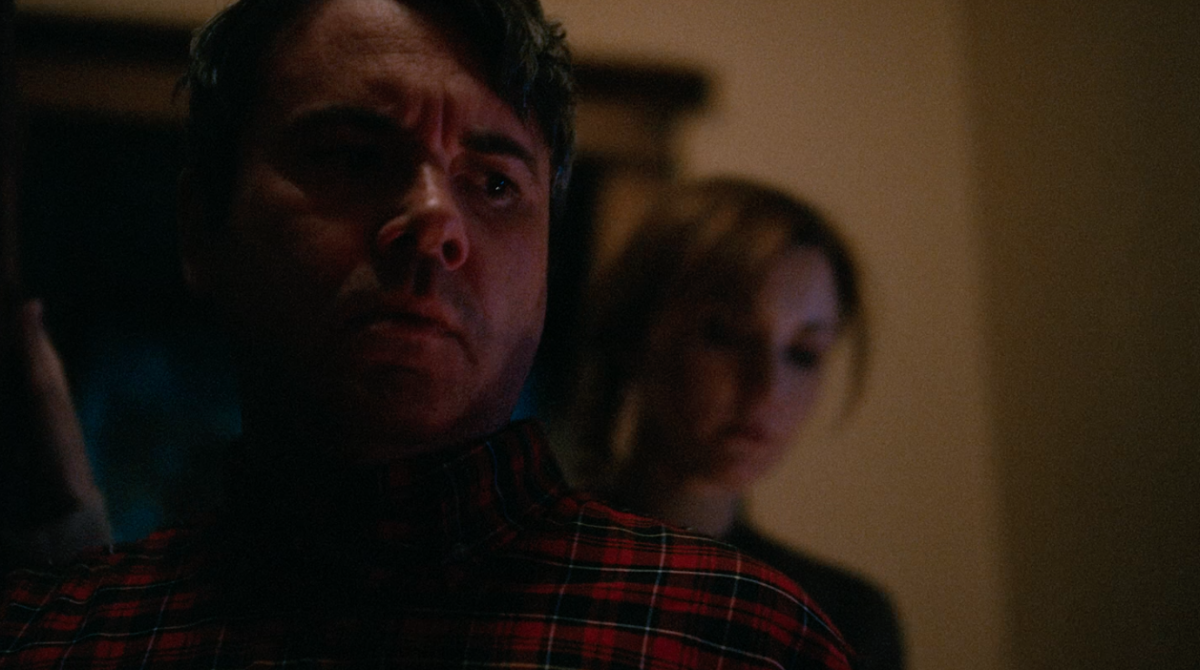 The most frustrating aspect of the script lies in the irrational behavior of its central characters. Matt has been given some decent motivation for not turning to the authorities but later on, you see him dozing off with his wife. Who the hell does that knowing that their sibling has locked someone beneath the house and is waving around a gun?

One scene has Steve freaking out and pointing his gun. Matt aims to calm him down and instead of moving away from the gun, he stands right in front of him. Why the hell doesn’t he move away? With a scene like this, the notion that Matt doesn’t call the cops becomes evermore unbelievable. I know he loves his brother, but come on! He’s obviously a danger to himself and to his wife.

The ending leads to even more frustrating lapses of illogical behavior. Granted this is not uncommon in a horror film, it’s actually quite known for it. But eventually it just becomes laughably ridiculous. 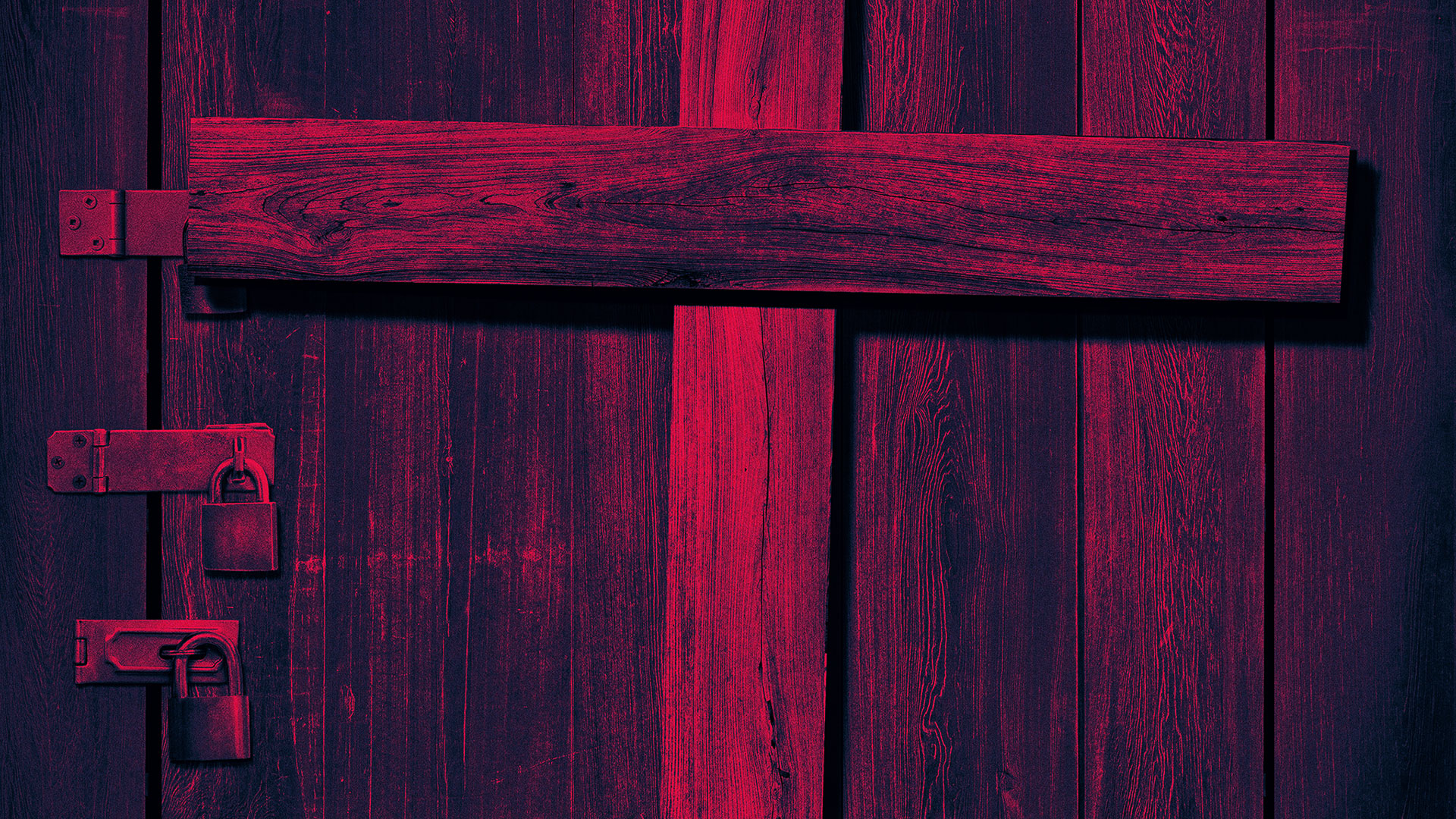 Does the devil lie behind this door? Image via Microsoft

The storyline is simple and effective: a couple visits a family member who has trapped someone inside his basement, whom he calls the devil. This premise has promise, can lead to all sorts of twists and turns. Unfortunately, it seems that Lobo struggled to create 90 minutes worth of screen material.

Hence the pace is extremely slow, despite it’s low-runtime. Most of I Trapped the Devil is pervaded by the droning soundtrack, which might aid the atmosphere but also becomes rather repetitive. A character would walk slowly in a room, looking around at the signs of Steve’s madness. There’s no revelation. There’s just that droning soundtrack in the background, promising that evil is on its way. Eventually it begins to feel that Lobo is merely padding the runtime.

As an experimental, low-budget debut in horror storytelling, Josh Lobo shows promise, even in its many narrative flaws. If the script had more meat to it, if the dialogue between the characters was more refined, this could have been a winner.

What we have is a visually appealing, atmospheric piece of cinema, that just needed some more compelling human drama — also, the characters need to act like human beings. Even so, I’m intrigued Josh Lobo’s future cinematic endeavors, as experience will surely refine his skills.

Thank you for reading! What are you thoughts on I Trapped the Devil? Comment down below!

Maybe he will get the story telling kinks worked out in the future. I still may check it out. I love suppprting indie horror.