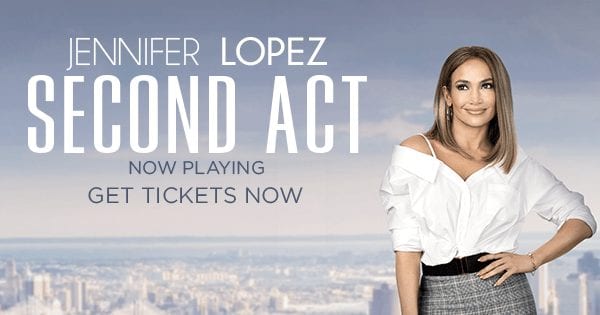 Where do you draw the line between calling something “watchable” and “good“? That’s the dilemma I had after watching Jennifer Lopez’s latest rom-com Second Act. It simply oozes love and Christmas spirit yet it has more head scratching moments than a second grader with a serious lice problem. But then again, JLo does dance to Salt-N-Pepa! Ugh, I’m so torn!

Maya (Lopez) is a struggling but incredibly hard-working woman at a New York supermarket. She’s driven, intelligent, and resourceful, but she just can’t seem to breakthrough to have her reality finally match her aspirations due to lack of formal education. After getting bypassed for a promotion for a man with a college degree, Maya has just about had it.

Suddenly, Maya’s friend Joan (Remini) has her son create an entirely new life for Maya with a new resume, LinkedIn profile, and Facebook account that boasts her as one of the most well-educated people a company could find (which includes a degree from both Harvard and Wharton). Immediately, Maya is hired for a consultancy at one of the biggest cosmetic firms in New York City and she quickly excels, though it may come at a cost to her personal life.

Though she’s far from her “Jenny from the block” phase, Second Act is deeply rooted in Lopez’s younger years, aping off of her home life and upbringing. (Lopez is also a producer on the film, showing once again that this is very much a passion project.) Some have noted that it seems a bit disingenuous for JLo, arguably one of the most famous and glamorous celebrities of this millennium, to play a down-on-her-luck character that is struggling to make ends meet. I certainly think there’s some validity to that argument — especially with how gorgeous Lopez looks in every frame of Second Act — but I do find it rather touching that Lopez wanted to make an inspirational story that would allow her to speak in part about her life.

One of the oldest and most tired (though still undeniably effective) pieces of advice that one can give to someone else in the film industry is to pull from what they know. Guess what, it still works!

Though I have a bit of a soft spot for Second Act, there’s no denying that this movie is extraordinarily far-fetched. As a person who works in the business world, I can assure you that background checks at prestigious companies are, indeed, a thing. In fact, companies that would fail to perform such checks clearly would never get to the level of respectability that the fictional “Franklin & Clarke” has in this movie. Everyone would fake their resumes if this could be done so easily! Someone with a degree from Harvard and Wharton with plenty of outstanding consultant work would develop a reputation in the industry, meaning someone who simply pops up out of the blue with these credentials would raise even more red flags.

Understandably, Second Act is meant to be a commentary on the value of a piece of paper that states “so-and-so graduated from here with honors” versus someone who is just as qualified (or more so) without the formal education, so the film needed to create a way for that discussion to occur. This is a very noble and worthwhile discussion to have, but couldn’t you have done it with a little more intelligence and thought? A Hollywood View of Business

One piece of artificiality that had me howling in the theater was Second Act‘s business talk. Here’s essentially what business conversations boil down to in the movie:

Granted, some business talk is clearly shaved down as a result of editing, but Second Act‘s view of day-to-day operations in companies has no connection with the real world. It’s a string of buzz words attached together with the hope that viewers simply nod like a bobblehead and roll with it. Maybe the screenwriters should have hired a consultant of their own to punch up the business talk. (Irony at its finest!)

But even with its obvious problems, there’s something about Second Act that kept me engaged, and it stems from Jennifer Lopez’s performance. Second Act is the classic star vehicle that shows its lead in the best possible light every chance it gets. Lopez looks god-like with numerous, beautiful business dress as she confidently struts into each room she enters. There’s even a few dance numbers built into the plot just to get Lopez to do what she does best. Do they make sense within the context of the story? Absolutely not! But are they fun? Yes! This movie isn’t necessarily relatable, but it’s definitely enjoyable.

However, Lopez manages to squeeze some real moments of emotion out of Second Act that are incredibly sweet and effective. Second Act is a bit of an emotional rollercoaster, one that many casual viewers will fawn over. And if I’m being honest, I did a little fawning myself. Lopez is incredibly charming as Maya, making Second Act watchable all by herself

Second Act is a Perfect Netflix Film Lost in Theaters

About midway through Second Act — when its tear-jerking elements start to show themselves — I began to think: would this movie be a phenomenon if it were a Netflix release instead of a theatrical one? The film hasn’t exactly tanked at the box office (it’s made $34 million worldwide on a $16 million budget) but we’ve seen movies with this sort of construct become incredibly popular for Netflix in 2018. Countless rom-coms have become instant sensations for the steaming service. Even Sierra Burgess is a Loser had its moment. Second Act has a super likable cast; an emphasis on emotion; a wonderfully festive spirit; and a few very solid bits of humor. It’s like the Netflix Algorithm pooped it out! Move over, A Christmas Prince!

Second Act is perfect for those that just want a bit of holiday cheer and warmth. It’s inoffensive in every way — we don’t get many movies like this anymore.

If STX Entertainment is smart they’ll sell Second Act‘s streaming rights to Netflix where it might just receive a (ahem) second act of its own. This movie has so much going for it with likable performances from a sneakily good cast and a wonderful sense of holiday cheer and earned schmaltz.

But then after I put on my curmudgeon hat, I started to see many of the flaws that keep Second Act from becoming a “good” movie, most notably a very, very messy script. Not even JLo’s stunningly beautiful appearance at the age of 49 (!) can mask these issues.

Thanks for reading!  What are your thoughts on Second Act?  Comment down below!

No mention of her cohort

That was by design! I didn’t find them all that noteworthy

Yup! Like I mentioned before, Remini and the rest of the crew were serviceable

When a review compares the move-viewing experience to the experience of a child with head lice, that’s a sure signal for me to pass on it.

Hahahahah you might be right! That’s a good rule!! 😂