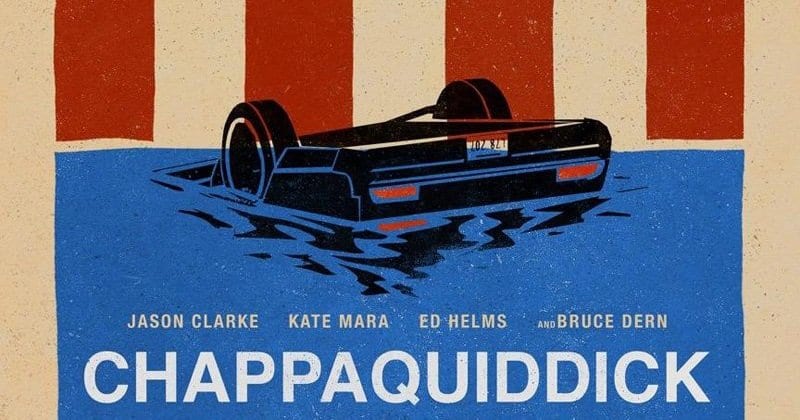 Before its premiere at TIFF last fall, Entertainment Studios Motion Pictures purchased the rights to Chappaquiddick, continuing their pursuit to distribute films that other studios won’t touch.  That phrase means a few things in the film distribution business, but in this case, it’s because Chappaquiddick challenges the most famous political family in the history of the United States: the Kennedys.  The following review will be spoiler free. 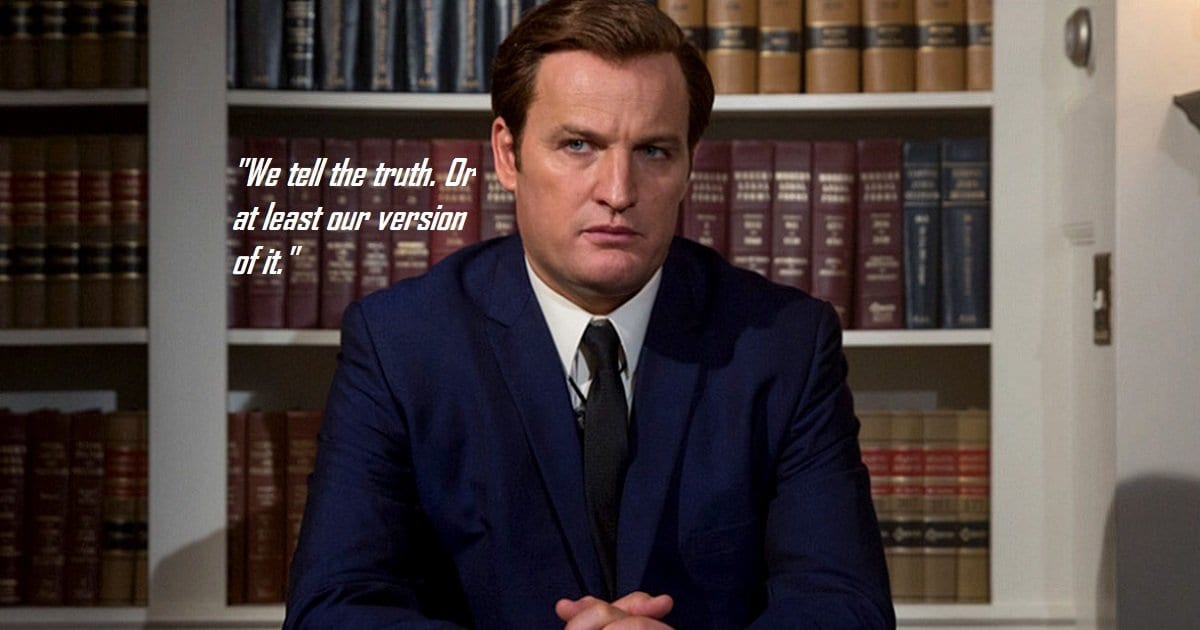 After a party with those that aided in his ascension in politics, Ted Kennedy (Clarke) decides to head home in his car, taking young Mary Jo Kopechne along with him.

In a state of confusion, Kennedy takes the wrong turn on the road, driving off the Chappaquiddick bridge and into the water below.  Despite the advice given to him, Kennedy doesn’t inform the police, going to bed without telling another soul.

With the press and police asking an onslaught of questions the next morning, Kennedy confides in one of the best legal and political teams he can assemble in such a short time period, hoping that they can guide him through the week.

The Chappaquiddick incident is known as the event that likely kept Ted Kennedy out of the 1972 and 1976 presidential races.  Still, Kennedy went on to serve as the United States senator from Massachusetts for over forty years, becoming the fourth longest continuously serving senator in U.S history — which makes the Chappaquiddick incident even more problematic for some people.

The Kennedys were once (and still may be) an institution in American politics, making anything that casts a negative light on the family fairly buzzworthy.  Entertainment Studios CEO Byron Allen noted that some “very powerful people” attempted to persuade him not to release the film, showing that the reach and legacy of the Kennedys is still kicking today.  Interestingly enough, Allen shot back with some remarks of his own:

We can’t really know for sure whether or not Allen is telling the truth about, well, telling the truth, but you have to respect the head of a smaller distributor for standing tough against outside forces. 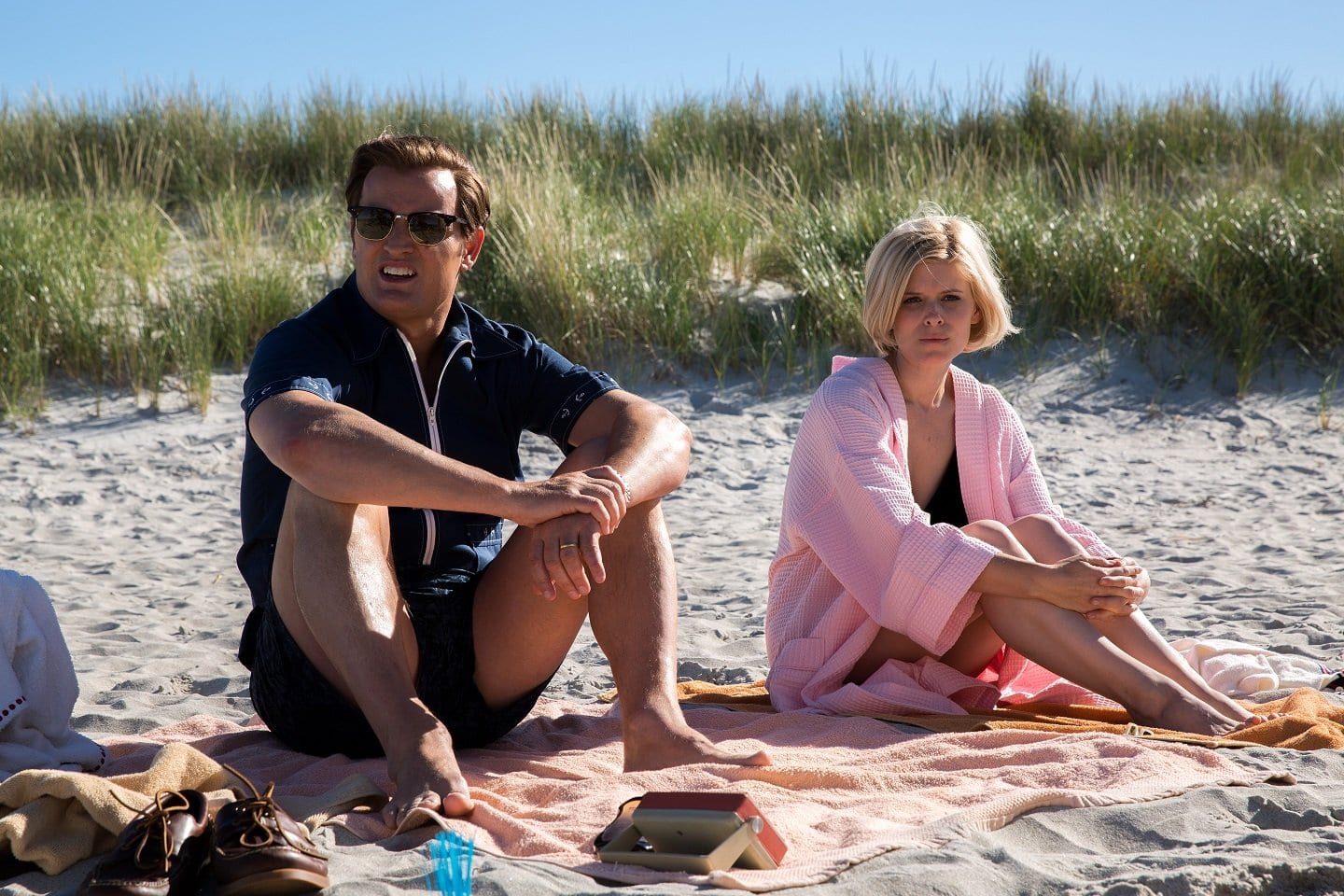 Jason Clarke is one of those actors that never quite breaks out to become a far-reaching crowd favorite, despite routinely putting in great performances regardless of the movie’s overall quality.  In other words, he’s one of the best actors that makes you say, “Ohh, that guy!”

Not only is Jason Clarke a dead ringer for a young Ted Kennedy, he’s pretty outstanding in the role.  Sporting a great Bostonian accent, Clarke carries the weight of the world on his shoulders — he’s a defeated, weak figure-head that’s desperately looking for direction in life.  Chappaquiddick as a whole digs deep into the common perception that Ted Kennedy is less than his powerful brothers, adding another layer to his desperation as he tries to win over the American people once again after his tragic car crash.

Clarke plays up the controlled hysteria of the situation, flip-flopping between the different directions that he can take as politician — telling the truth or spinning it to his benefit.  From the beginning, Clarke conveys his personal spiral with ease.  As any career politician would act in the situation, there’s a feeling of calmness and dignity with which Clarke always carries himself — even in the face of certain uncertainty.  And yet, as the week following the crash unfolds, you get more peaks behind the curtain as he begins to crack.

Jason Clarke’s take on Ted Kennedy is damaged and desperate to appear great in some capacity, and that makes for an incredibly complex and fascinating figure.

As I explained above, anyone that goes against the Kennedys is operating in fairly murky waters.  You just can’t tell the story of the Chappaquiddick incident without taking a few shots at the Kennedys, and director John Curran does just that.

Chappaquiddick works within the week period leading up to Ted Kennedy’s now famous speech on primetime television, showing all the backroom deals and stretching of the truth that Kennedy and his team did in an attempt to spin the court of public opinion back in the politician’s favor.  With all the attempts to improve Kennedy’s position with the public, Chappaquiddick becomes darkly humorous as it displays the absurdity of it all.  In that respect, Ed Helms as Joe Gargan works extremely well as a voice of reason.

Chappaquiddick doesn’t go out of its way to vilify Ted Kennedy.  Rather, Curran tries to tell this story as honestly as possible from the point of view of Kennedy, displaying the less than desirable elements of his personality and family dynamics organically within the story itself.

The crash that left Mary Jo Kopechne dead is a troubling event, and many other interpretations of this material would have made an attempt to fully exonerate Kennedy for his actions.  Curran calls it as he sees it, capturing Kennedy as a complex man with many internal struggles — that’s where great drama comes into the picture. 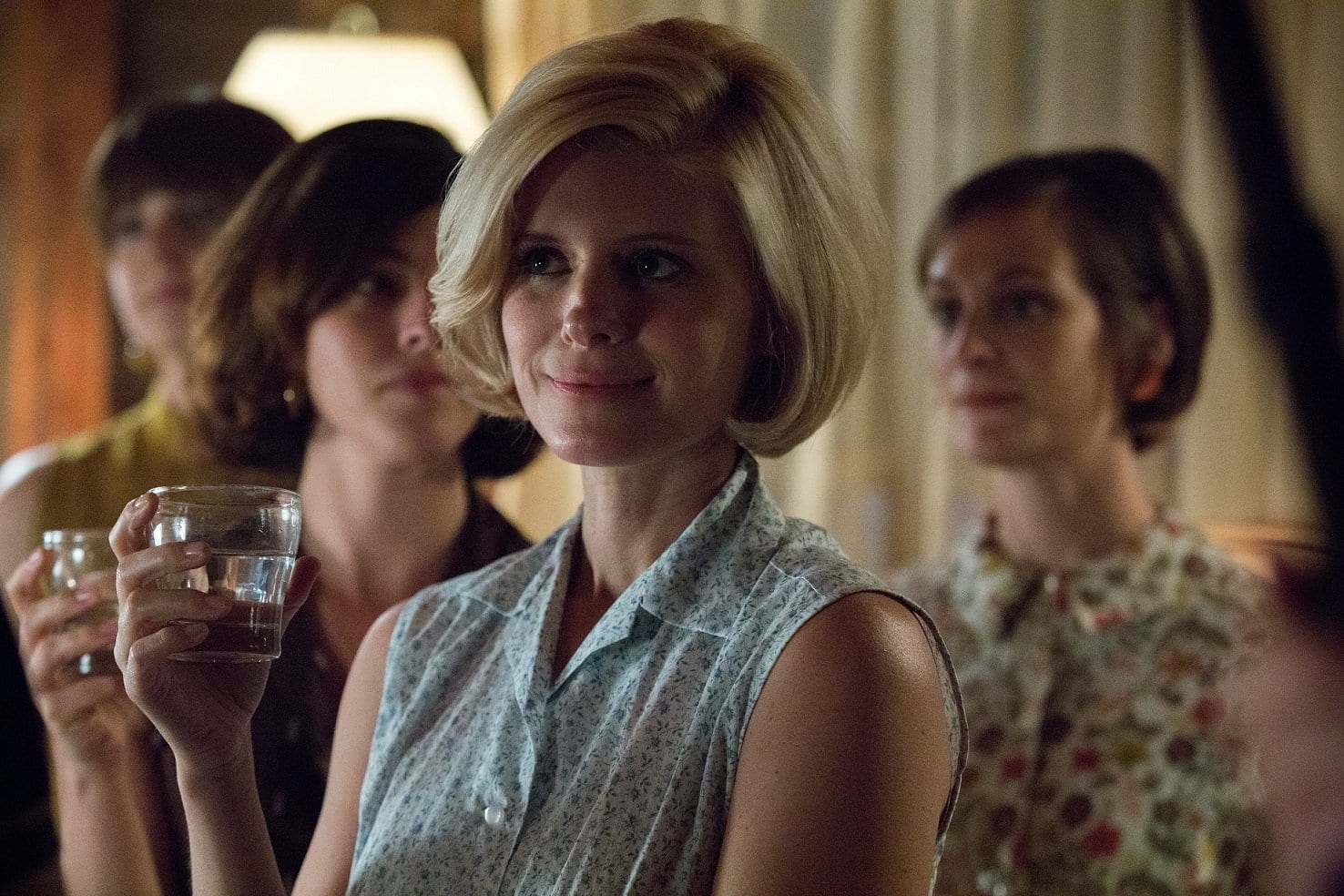 A Classic Example of a Film that Needed to Show, Not Tell

And yet, Chappaquiddick could have been more impactful if it showed just a little restraint.  Once the car crashes into the water, Chappaquiddick has a great feeling of nervous energy that never lets up.  Still, the film’s script forces characters to deliver stilted, on-the-nose dialogue that sucks out the life for a brief moment.  Instead of internalizing the events that just transpired, the talented actors have to use lofty, somewhat empty dialogue that often betrays the realism created beforehand.  It’s a nitpick that continues to repeat itself — like a fly that continues to buzz in the vicinity.

Chappaquiddick doesn’t trust its audiences to understand the underlying feelings in moments of distress, which is a shame since the rest of the film is so well put together. 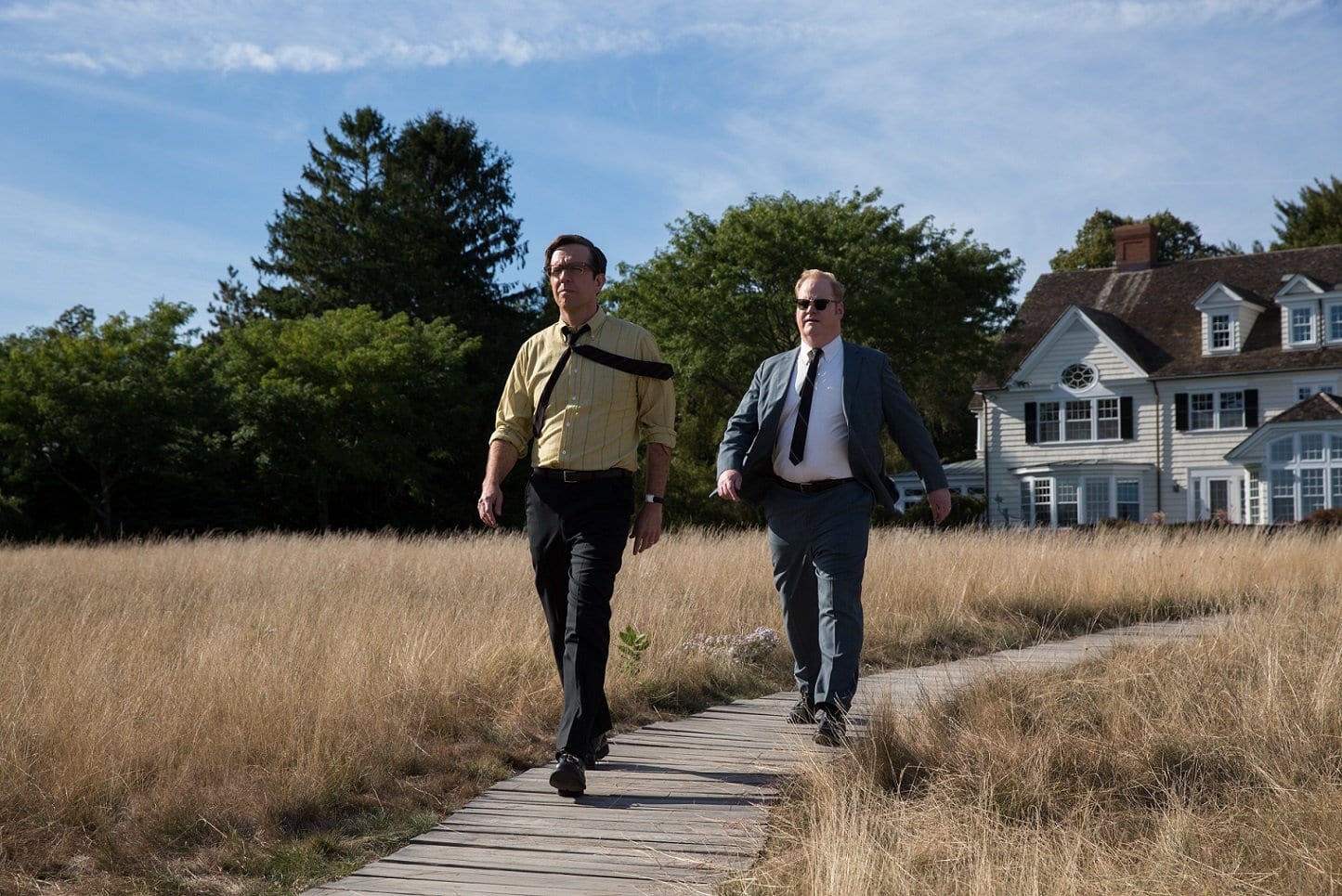 Powered by great performances from a talented cast (most notably Jason Clarke in the lead role), Chappaquiddick is a taut political thriller that is incredibly engaging from the second Kennedy’s car hits the water off of Chappaquiddick Island.

Director John Curran focuses on telling this story on a smaller scale while also nodding to the massive ramifications that the event had in the history of American politics.  However, Curran’s best work within the film is his portrayal of the central character, telling the story with a close eye on modern politics, making the film about an event that occurred in 1969 just as relevant in 2018. 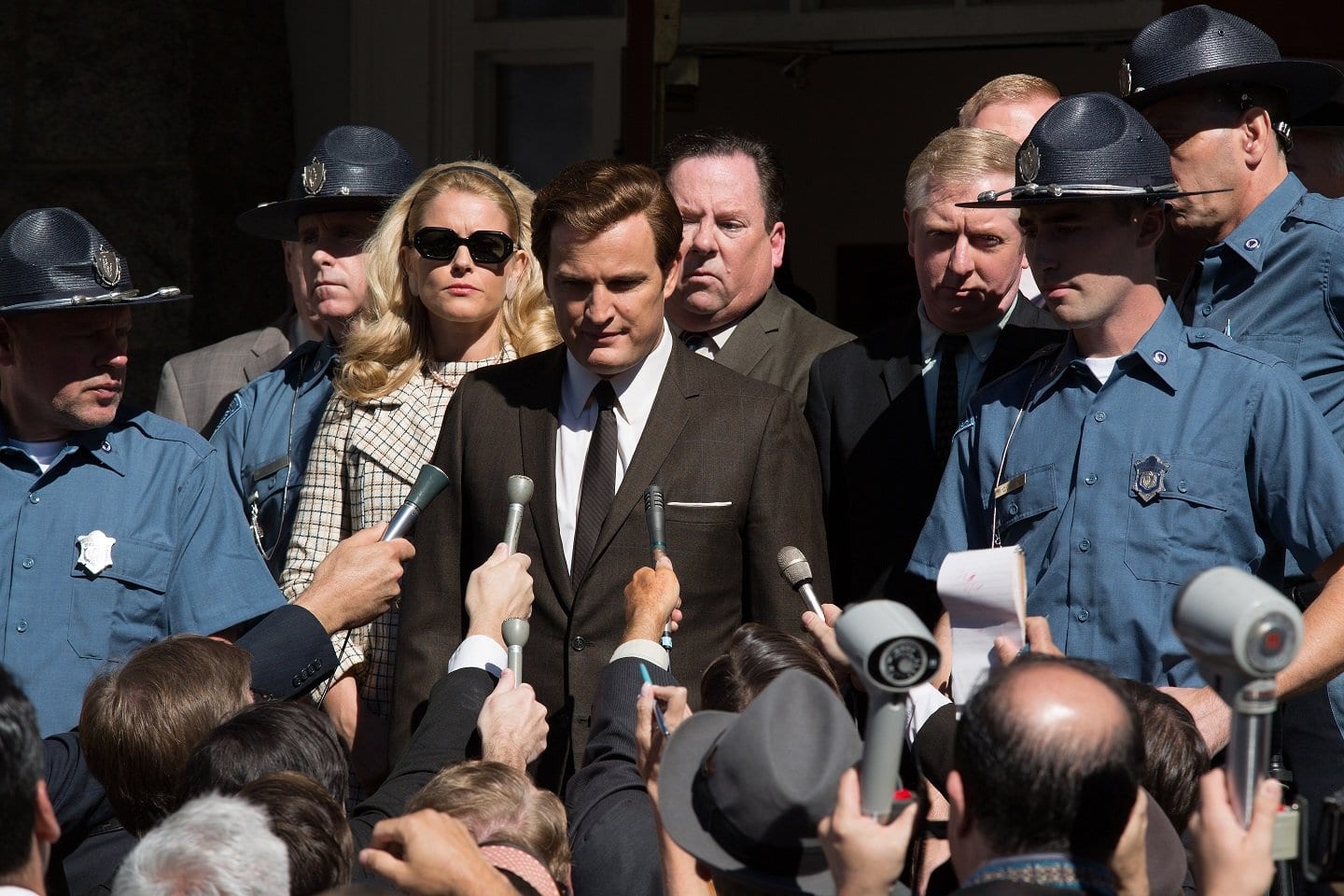 Thanks for reading!  What are your thoughts on Chappaquiddick?  Comment down below!

Youre so right about Jason Clarke. He consistently performs well despite the overall movie

I think he’s lowkey one of my favorite actors! I love a good character actor!

I’ve wanted to see this film since it was supposed to come out last year (I think?). It’d be interesting to see what exactly happened after this incident.

It’s incredibly fascinating! Definitely a must-watch for anyone interested in the story!

I wish I had seen it while I was at TIFF.

So strange to read of this movie after living through all of the news stories of the event when I was in junior high. I will definitely give it a watch.

I can’t imagine! My parents talked about the same thing when I told them about the film

Honestly, I’ve been debating for a long time whether or not to see this movie and actually had no intention to put it in my schedule… maybe I will. Anyone who claims they just saw a career best performance must’ve saw something good in the movie. Bravo.

I’m glad I could help you out a little bit!