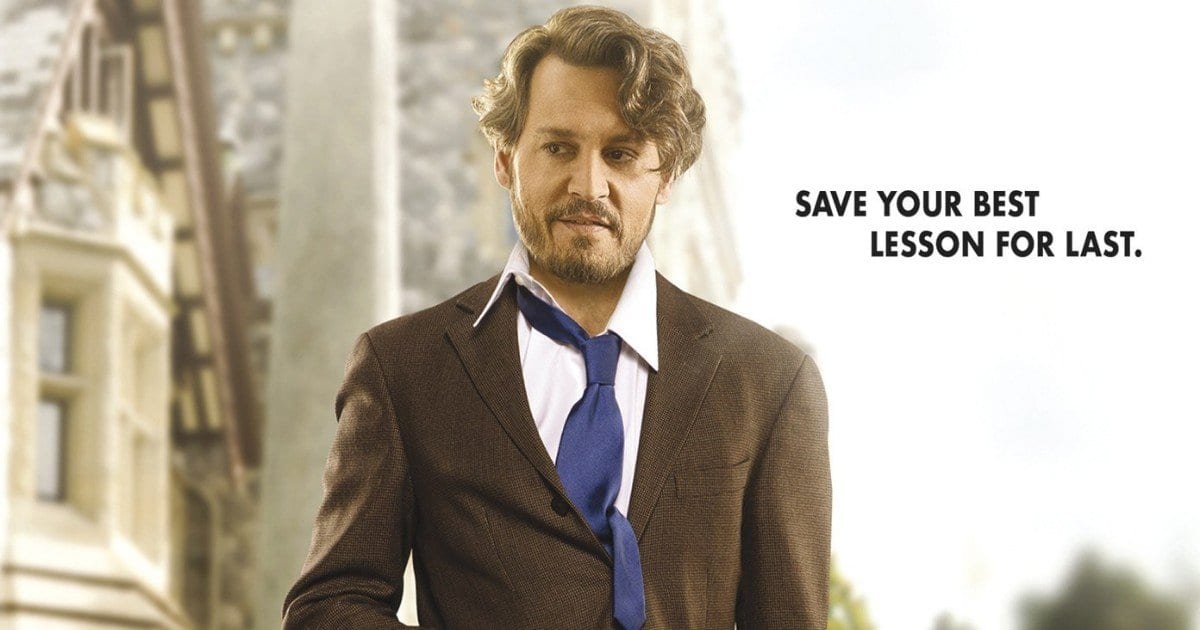 There’s a very good chance you’ve never heard of Johnny Depp’s film The Professor. This is not necessarily indicative of the quality of the product. There are so many movies, good and bad, that are poorly marketed. These films are often dumped by their distributors upon our streaming services.

In the case of The Professor, I found it when, in my boredom, I perused film trailers on YouTube. From the haphazardly edited trailer, I surmised that its distributors hadn’t put much effort in creating any sort of buzz. When it finally came out, the early reviews seemed to confirm the film’s low quality.

Literary professor Richard Brown (Johnny Depp) is dying of lung cancer. Without treatment, he will most likely perish within six months. After a tirade of expletives, Richard decides to take a different path in life: live life to its hedonistic fullest and speak the truth as he sees fit.

However, he keeps his deadly illness mostly to himself, only confiding in his friend and colleague Peter (Danny Huston), while leaving his wife, Veronica (Rosemarie DeWitt) and his daughter Olivia (Odessa Young), in the dark. His wife recently admitted to having an affair with the university’s chancellor, Henry Wright (Ron Livingston). Since the affection in their marriage had been declining for some time, Richard makes an agreement with Veronica to have an open marriage.

The changes he makes in his life even include his professional life: expelling any disinterested student from his class and assembling only the most earnest ones. In class, he openly drinks and partakes in numerous intoxicants. He encourages his students to ”seize the day”– but in a less PG-13 way.

Regardless of his many irresponsible antics, his newfound attitude toward life gets him closer to the people around him. The good times cannot last however as the symptoms of his disease begin to invade his daily life. But Richard won’t go gentle in that good night and continues to rage against the dying of the light.

Richard (Johnny Depp) having a drink with his buddy Peter (Danny Huston. Image via Movie Nation

Watching this movie makes you realize how we shouldn’t judge a movie by its trailer. Any of the humor present in the trailer seems forced, while many of the comical moments in The Professor genuinely work.

A case can be made that Johnny Depp is slightly miscast here, but much of the humor works because of him. The film gives Depp many chances to showcase his knack for dry delivery and his uncaring attitude to society’s norms and contempt for the general status quo, which Depp has experience with from his previous roles.

The funniest moments, surprisingly, involve Danny Huston‘s character Peter, Richard’s friend who seems more distraught about Richard’s cancer diagnosis than Richard is. Huston has always been an incredible character actor. Unfortunately, he’s often been cast to play an unlikable character, which he does extremely well. But in The Professor, Huston shows he’s equally good at playing a lovable goofball. I’d love to see him play opposite Will Ferrell in some madcap comedy one day.

Wayne Roberts’ screenplay, while flawed, is filled with genuinely funny scenes. Highlights include an awkward coming-out from Richard’s daughter at the dinner table, Peter’s sentimental speech at a cancer self-help group, and when one of Richard’s students propositions him.

As a drama, the film only slightly works. There’s an earnest attempt to explore mortality and coming to terms with the heartbreaking reality of death. Relationships are well-developed. You do feel the span of years between Richard and his wife, Victoria (the always wonderful Rosemarie DeWitt) and his connection with his daughter.

At the same time, there are a few grand speeches that do not have the tear-jerking or moving effects the film wants to evoke. This might partly lay with the casting of Depp. Depp is good at playing the drunken rebel but he hardly seems to be the type to inspire a group of students. In the quieter, more dramatic moments, he’s ‘fine’ but not much more than that. One can’t help but wonder what another performer, perhaps Robin Williams for example, could have done with the role.

At the same time, it’s also hard sometimes to really care for Richard’s sorrows. It’s sad that he has cancer, naturally, but the film never touches on his extensive privileges. The film gives off the vibe that he feels like some sort of failure but you wonder why. Besides his alienated wife, he’s a literary professor (with tenure) in upper class society with a sweet daughter and a close friend. These are hardly the hallmarks of the downtrodden.

The film also doesn’t delve deeply enough into its themes, opting rather to be a more lighthearted affair. This could be a blessing in part as the film never becomes a depressive affair despite the subject matter. Wayne Roberts caps this story off in an unusual way. It’s not about the character’s death but rather his acceptance of death. It’s a bit anti-climactic, but perhaps a greater revelation should not have been expected. There’s something to be said about its simplicity.

If you like to see an inebriated Johnny Depp for 90 minutes than you’ll have some fun with this movie — though don’t expect any drug-fueled hilarity like we saw in Fear and Loathing in Las Vegas. It’s certainly a delight to see actor Danny Huston play an endearing companion, rather than some unsympathetic supporting character.

It’s certainly not a movie deserving of intense scorn, despite the zero buzz surrounding it. As a comedy, its okay, but as a drama, it never reaches its desired profundity. Johnny Depp is slightly miscast as the title character, though his dry delivery is good for a couple of laughs. There’s still the feeling that Wayne Roberts really wanted to tell this story, so the film isn’t lacking heart and soul.

I wouldn’t necessarily recommend this film, but if you really don’t have anything better to do, and you’re a devoted fan of Johnny Depp (or Danny Huston — who doesn’t love that man?), go see this movie.

Thank you for reading! What are your thoughts on The Professor? Comment down below!

I knew of this film, but didn’t know that it had come out already.

Another disappointment from a once-great actor?

Sorry, quite the opposite actually.

‘Rocks’ Is a Celebration of the Resilience and...