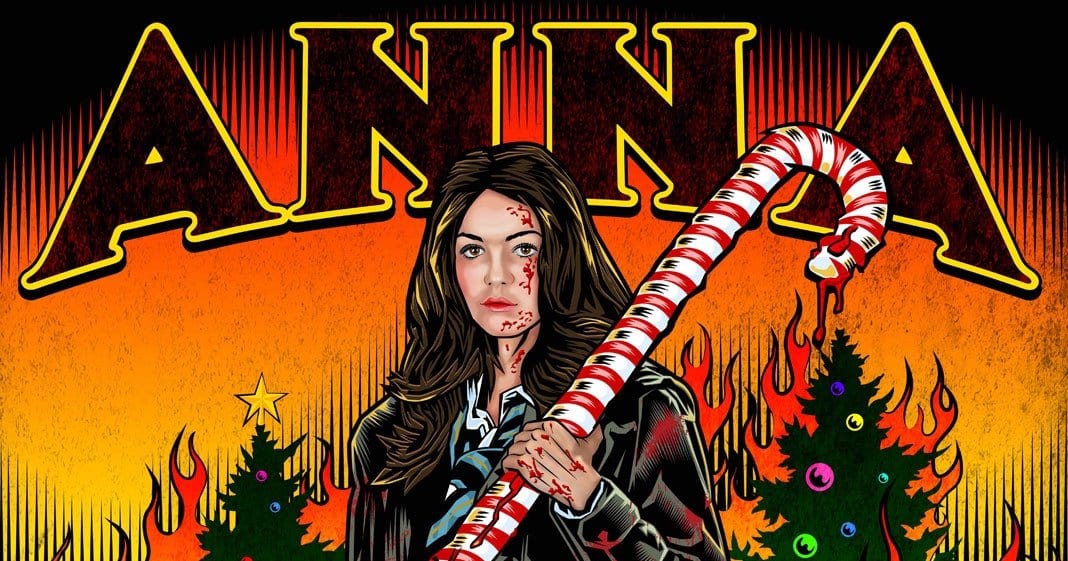 Just in time for the holidays comes this wondrous recipe for peace and joy all the year through. Take one part Wicked, two parts Shaun of the Dead, and a dash of Christmas, and you get Anna and the Apocalypse: a Christmastime zombie musical that encompasses all the feelings of the season rolled up with the angst of being a teenager.

What starts as any normal high school drama, following Anna (Hunt) and her friends dealing with normal teenage troubles, only with singing and dancing, turns into a fight for survival and a desperate search for loved ones after a zombie apocalypse descends upon the sleepy town of Little Haven, which also brings more singing and dancing.

Anna and her friends attempt to get back to their school where their families are hiding, so they can figure out where to go in this new zombie landscape they find themselves in.

Anna and the Apocalypse premiered last year at Fantastic Fest and was picked up by Orion to be released stateside this holiday season. Since then, it has been rolled out very slowly to select theaters and, with the holidays passing by, might not get a full-blown release, which is a shame.

Anna and the Apocalypse combined many genres through it’s runtime, some done better than others, but moviegoers looking for something different definitely can find it when they sit down to watch Anna and the Apocalypse. Mixing a Christmas film, zombie comedy, zombie horror, high school drama, and musical numbers all in a 90-minute run-time should be applauded in its own right as a wonderful feat of filmmaking.

Musicals can really be hit or miss when it comes to the big screen. As long as you have memorable, catchy music, that brings big emotion, you should have a winner on your hands. That is what Anna and the Apocalypse accomplishes if you let it take a bite out of you!

I have a soft spot for musicals, and while Anna and the Apocalypse hits all of my boxes, I am aware of the shortcomings that cramming so many genres under one label can have on a project. Due to this, this film unfortunately suffers from an identity crisis of sorts which could turn some people off.

As stated earlier, any musical worth its salt must have the music at its disposal to evoke emotion. This is the genre that Anna and the Apocalypse excels at.

The music in this film ranges from inspiring, to hilarious, to heartbreaking without skipping a beat. By the time the first number finished, I knew I was in love with this movie because of the emotion I felt the characters convey and their angsty disposition set forth in the song.

The soundtrack has been playing constantly in my head, whether I am playing it on Spotify or if the songs are just in my head. The song, “Turning My Life Around”, has taken the place of “Another Day of Sun“ from La La Land, as my wake up and put myself in a good mood song.

I think the music in this film is what really sets it apart and is why this movie should be seen on the big screen. Musicals just play different at the movies and having the speakers blasting with the larger than life dance numbers unfolding in front of you is an experience that I think we all need from time to time.

The characters in Anna and the Apocalypse all accomplish what they need to do to move the story along. By the end of the film, I was connected to these characters, but mostly due to their performance in song. The characters, as a whole, are basic, cookie-cutter characters that you will find in any and all zombie films. You have the heroine to lead the people, the jackass that needs to step up and be a hero, as well as the always needed, expendable characters. Without the music in this film these characters would have no personality outside of what is needed to push the plot forward. However, because of the music these characters are given a depth that is usually missing in the horror/zombie genre.

Adding the music and songs gave the characters the chance not only to tell us their story but allows us to feel their story. Whether it’s the good guy singing about how he wants to get the girl, or the jackass singing about how good he is at killing zombies or the striking juxtaposition of singing about good days with the “end of days” beginning in the background, the audience is able to put themselves in the shoes of the character. Three minutes in song can take you a lot further in both emotion and story progression than three minutes of flat dialogue.

Give Them a Show

I had high expectations going into Anna and then Apocalypse. Knowing I was going to see a zombie movie and a musical, I wanted plenty of both. While I got all I wanted in the musical portion, I found the zombie side of it all lacking.

The zombie story within Anna and the Apocalypse follows the basic formula used many times over within the genre: the revelation of zombies; a time when the characters are scared of zombies; the fight back against the zombies, and the ending with the obligatory “where do we go now that this is our world?” This is always the formula used in these films. What Anna and the Apocalypse did, like Shaun of the Dead did before it, was add comedy to the mix. The addition of comedy spiced up the typical zombie movie formula, giving it a fresh feel.

Also by making the main characters teenagers, there was an added element of teenage angst that at least camouflaged the zombie movie playbook for the better.

I would have just liked to see a different formula being used all together. Something that we really haven’t seen before to make this movie stand out and be a must see for zombie film aficionados. While I appreciated trying to hide the playbook, I just wish they would have just thrown it out and had fun making something new.

Anna and the Apocalypse is your basic zombie film, highlighting the expected violence with music and dancing. What I wasn’t expecting was the deeper story of family and angst about your place in the world no matter what age you are. The zombies act as a metaphor — as they always do — in this film for whatever you think is holding you back from being the best you that you can be.

I adored the music in this film and the soundtrack has become all I listen to. I have about 80% of it memorized and is what I am probably singing at the top of my lungs if you saw me driving down the road lately. Due to my adoration of this film, while knowing that it isn’t a perfect film and that it isn’t for everyone, I still can’t help but put it at the top of my 2018 list.

I just know that I will continue to listen to the soundtrack and I will purchase this film as soon as I can and force people to watch it for many Christmases to come.

Thanks for reading!  What are your thoughts on Anna and the Apocalypse?  Comment down below!

[…] Past Harry sees Future Harry and decides to kill him to see what happens. He rips a hole in the space-time paradox and the world ends. […]

The Hardest Working Actor In Hollywood: A Look...