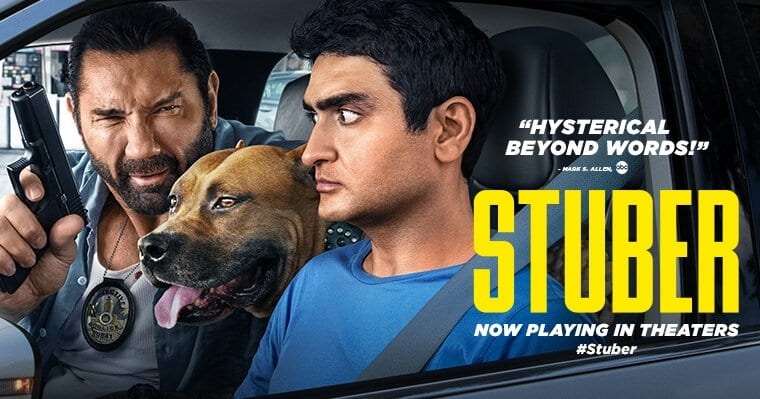 I knew going to see Stuber would require selling my soul. Well, here we are, another example proving why people don’t want to watch comedies in theaters anymore. If people want to watch a bad comedy, they might as well stay home and renew their Netflix subscriptions for another month. Stuber is here as the first Disney-Fox Rated-R film, and things are not off to a great start.

Ladies and gentlemen, strap on your seat belts because I’m about to drop you off as far away from this film as possible. No charge!

Vic (Bautista) is a cop running a long case that lost him his partner. Stu (Nanjiani) is an Uber driver at risk of a one-star rating. Their paths cross when Vic needs someone to drive him from crime scene to crime scene after his LASIK eye surgery. Together they’re the un-dynamic duo working together to stop a criminal.

This is a film that came out in theaters.

No Words to Spare

Stuber‘s first scene made me think I was about to watch something worthwhile. For a second there, the script made sense, characters weren’t annoying, and the stakes were present; I really thought things were off to a good start. Suddenly, the alleged comedy kicks in.

Stuber is a mess of a film that takes home-run swings at humor and rarely makes contact. What it often does is present everything in a way that would serve attempts at jokes over the needs of the story — therein lies the problem. All of the pointless and downright stupid plot points can trace back to the habit of shoving in an extra unnecessary joke.

If the plot takes a rest for something so devoid of relevance it’s no wonder there’s no thrill to any of it. This is especially the case when the alleged jokes have nothing going for them. They’re just consuming the runtime instead of developing some of its characters or propelling the action. The humor amounts to what are essentially non sequiturs; you can tell that Nanjiani and Baustista thought of something funny to do on the spot and tried to force it into a scene that is completely unrelated.

Kumail, the Tired-Old Shtick and Dave, the Saving Grace

I don’t wish for anyone’s career to burst into flames, especially when associating yourself with Stuber might’ve already done the job. But I’ve grown tired of Kumai Nanjiani’s shtick. I find the actor extremely overrated and limited in the douchey yet insecure kind of roles he continues to pursue. At this point, I’m not sure he can play any other kind of character.

From watching some of the trailers, it appeared that Bautista’s character would be a cheap knockoff of Drax from the Guardians of the Galaxy movies. Luckily, he’s more than what I was giving him credit for. In many non-Marvel movies, his dialogue is often sparse, so I wasn’t sure if there was more to him as an actor. Although this character is similar to Drax, there’s still enough going for him for me to appreciate. Bautista does a great job of playing a role that’s both a fit for his personality and a fresh alteration of his previous acting credits.

He brought his loud, repulsive and angry demeanor to the front by finding the sweet spot between the over the top and the subtle. In all of the character’s outrage, there are still moments that humanize him. The bond with his daughter is likely the strongest asset of what Stuber has to offer.

Unfortunately, in order for the chemistry to work between the two leads, just Bautista isn’t enough. Their relationship has a fine starting spot, but it’s the minute it starts to develop that a lot of it falls apart. Their interactions slowly fall out of place and devolve into ridiculous dialogue. There’s a store scene in the middle of the movie that is the perfect example of the two characters reaching rock bottom as they try whatever they can inject life into this movie. It’s here where all of the worst aspects of Stuber come together and form a microcosm of my frustrations with the film as a whole.

The Writing That Never Was 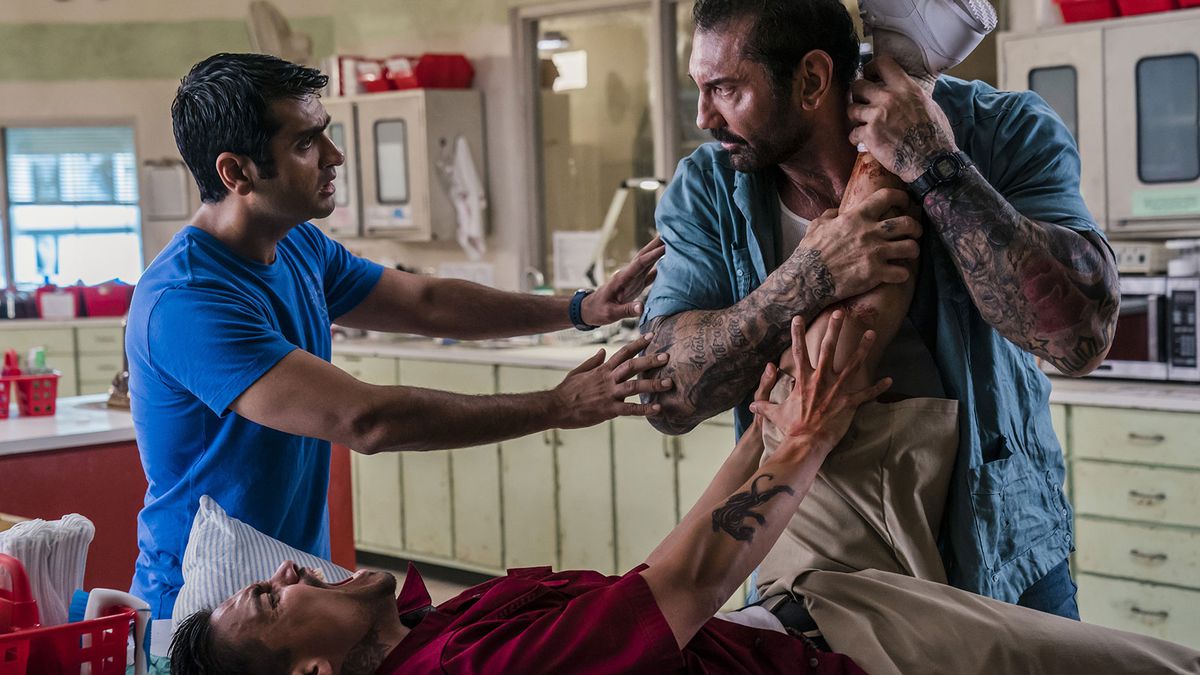 This is pretty much the main issue with the movie. I already touched base on how this affects the comedy, however, the problem continues to find its way into the rest of the film’s elements as well. The script is widely inconsistent. Stuber stresses the fact that Bautista’s character can’t see up close due to his eye surgery. Yet in some scenes, he’s able to spot items with no problem whatsoever. Kumail’s character becomes hyper-annoying in the first encounter with Bautista, and then reverts back to his usual self for the rest of the film. The movie is full of waffling and it gets frustrating very, very quickly.

Stuber is also predictable in the cheapest way possible. Every line of dialogue is so deliberate it leaves no room for any surprise. There’s a conversation in the movie about realistic cop stunts that’s such a dead giveaway of where things will go that the characters might as well have winked at the camera. After an hour into the movie, I knew where everything would fall into place.

This feels a lot like a first draft of a screenplay from Tripper Clancy. There’s a clear attempt to have elements come full circle, but I never felt a sense of satisfaction. It’s possible that this stems from Michael Dowse’s direction as well, as many scenes — most notably the sequence at the veterinarian’s office — lack a certain cinematic quality and clever bite. It feels both tired and scattershot.

The major flaw of this movie is the same as just about every other poor comedy: the writing. All the twists and characters aside from Bautista’s are as noteworthy as the the film’s humor, so not at all. I wish there was more to say about Stuber but there’s nothing going for it. Screenwriter Tripper Clancy has what it takes to write a tighter screenplay in the future, but he and the rest of the crew wasted an opportunity here.

Thank you for reading! What are your thoughts on Stuber? Comment down below!

If you’re feeling adventurous, and want to keep the movie discussion going, try taking a look at the top 5 movie slot machines and see which is the best for you!

[…] for a Golden Globe for his truly bizarre, wide-eyed performance. Even the usually scene-stealing Natalie Morales doesn’t seem to be given much to do with her considerable […]

I actually kind of liked it, but I don’t know all the technical stuff with evaluating a movie, just whether I like it or not. I liked the characters and the story and I just sat there and enjoyed it without thinking too much about it.

Yeah, a bunch of other people in my theater also seemed to like it. And sometimes all the technical stuff doesn’t matter as long as you like it.