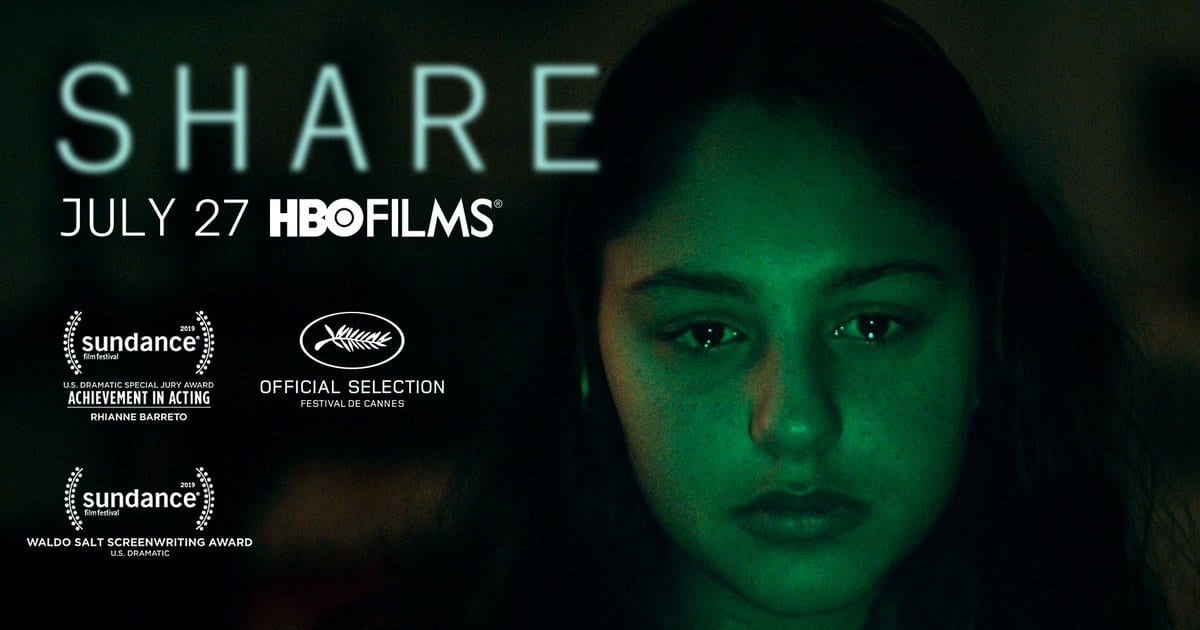 I can picture the more standard, Hollywood version of Share in my head: it’s full of long diatribes, tearful wishes, and happy resolutions. A24’s Share, however, is far more cynical and rough, challenging its audience to accept its reality and do something about it. And quite honestly, I couldn’t be more impressed with how boldly this film carries itself.

Mandy (Barreto) wakes up on her front lawn after a night out drinking, confused at what just transpired over the last few hours. In a haze, she shrugs it off, not thinking much of it.

However, the next day at school she uncovers a video of her that is spreading throughout the school, showing what appears to be a few boys taking advantage of her in her intoxicated state. Shocked, Mandy tries to get passed the entire situation herself, but it’s clear rather quickly that this won’t happen. Her parents escalate the situation ever further by taking the video to the police, but Mandy continues to wish that this would all go away so that her life can go back to normal.

Bianco Expands Upon Her Past Work

Director Pippa Bianco got her start like many other young, hungry filmmakers by directing a short film. And like a substantial subgroup of those same young, hungry filmmakers, she expanded her short film into her first feature-length movie. Share (the short film) was a breakout hit back in 2015, debuting at SXSW and winning the Special Jury Recognition Award for Narrative Short. The film later showed at Cannes where it was the only American short in competition, winning the festival’s Cinéfondation Award.

Within the same month of winning at Cannes, Bianco announced that she was going to adapt her short film into a feature-length screenplay. The news immediately attracted the Sundance Institute, which picked up the film for their Screenwriters Lab program.

The Sundance Institute loves to take care of its own, so it’s no coincidence that film had its world premiere at Sundance this year.

Taissa Farmiga in Share (2015). Image via the Tribeca Film Festival

Pippa Bianco is Already a Master

From the first frame there’s a sense of foreboding that quickly gets under your skin, like a car crash occurring in slow motion. Bianco wraps the entire movie in a constant shadow, mixing in the occasional strobe of neon light for color. This sense of style is not what you’d normally expect from this kind of movie, and that’s exactly what makes Share so captivating. There’s always a feeling that something — whether it be a material or non-material entity — is following Mandy, like a ghost she can never escape.

Bianco directs this movie less like a film with a narrative structure and more like a horrible nightmare, punishing the lead character with every stylistic choice. There isn’t much of a three-act structure here, but there wasn’t ever an attempt to make one.

The movie leaves you no choice but to empathize with the main character… profusely I might add. Honestly, I just wanted to give Mandy an endless amount of hugs by the six-minute mark while simultaneously wishing away all of her worries. It’s safe to say that Bianco knocked it out of the park, so much so that she is firmly on my figurative “Directors to Watch Out For” list.

Share is Rhianne Barreto’s first foray into feature-film acting, but she’s already a pro. She provides a very understated performance, but one that has an undercurrent of raw emotion to it. You know she’s going to lose her shit at some point, and it’s only a matter of time before that moment actually happens. There’s a consistent feeling in her performance that works in tandem with Pippa Bianco’s direction, in that everyone and everything is out to get her.

Barreto perfectly conveys the feeling that many individuals have when they become a victim in an incredibly unfortunate scenario. Namely, the desire for everything to go back to normal. We often forget that the pain of living with a traumatic experience can sometimes overshadow the actual event. Barreto expresses this thought quite responsibly.

There are hungover interns all over Hollywood that are tasked with reading scripts every single day as part of their role on the development team, and I’m sure that each of them has sifted through plenty of Hollywoodized versions of this script before, especially in the aftermath of the #MeToo movement in the industry. Share is a very simple story: a girl has to attempt to come to terms with her emotional state after a traumatic and hazy event while simultaneously trying to learn the specifics of what happened. Thankfully, Bianco doesn’t feel the need to pad out this movie with unnecessary story beats and fluff. The movie doesn’t even reach 90 minutes, but it’s probably the perfect length for the story its telling.

Not once does this movie even attempt to hold your hand. It’s a rough tale with a hard, cynical edge. I envision an alternate universe where Share was noted to death by the studio system, leaving the film to flop into theaters like the cinematic version of a wet noodle. Thankfully, the version of Share that we have in this plane of existence is quite the opposite as it offers a scathing — and often vile — look into the issues that many victims face. This bold take will force viewers to unwrap what this movie has to say and how it reflects our culture. Some of the characterizations don’t work — Charlie Plummer’s character feels particularly cartoonish — and it might border on becoming heavy-handed at times, but one has to admire such a courageous discussion of a rough subject.

News broke quickly after the Share‘s premiere at Sundance that it was purchased by HBO, even though A24 had plans to release the film theatrically later in the year. Part of me wishes that everyone had the opportunity to see this film on the big screen, but the other part is glad that HBO’s platform will allow for more people to get a chance to see this film rather than it only be lionized by a select few that went out of their way to see it in arthouse theaters.

Share will challenge viewers in a way that will make many of them bristle initially, leaving many in an immediate state of displeasure. It’s consistently hitting a raw nerve with absolutely zero remorse, ending in a final shot that I will most likely never forget.