‘One Hundred and One Dalmatians’ Is a War Film 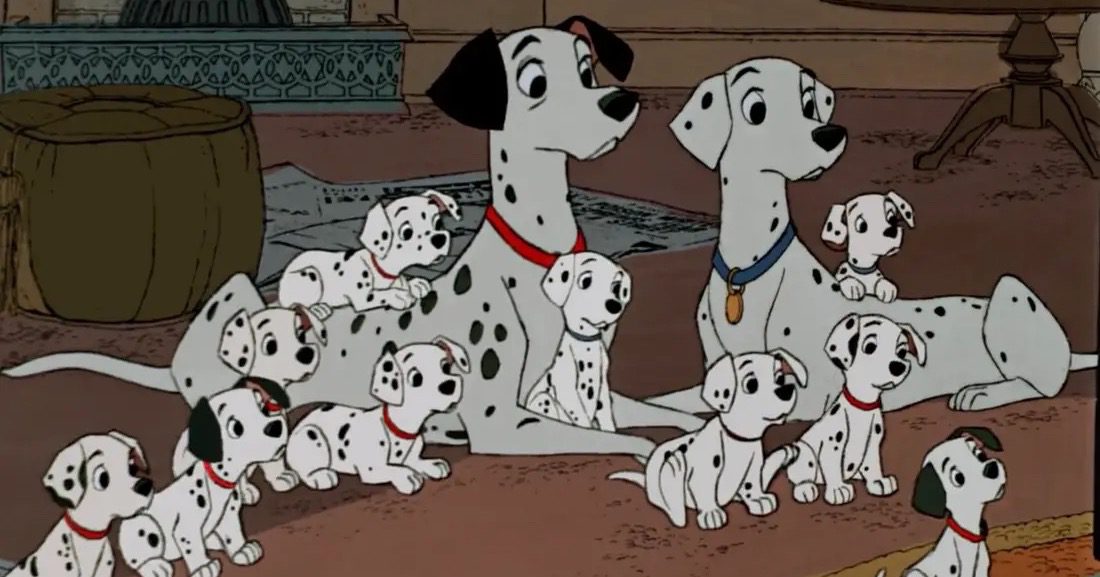 After her introduction nearly halfway into the film, the nanny in One Hundred and One Dalmatians is likened to a dog by our narrator and protagonist Pongo. Usually a denigrating term — calling someone a dog might mean they’re ugly or less than human — but for Pongo, a dog himself, it’s one of his highest compliments. There’s something canine in nanny because of her loyalty to her human employers and their small brood of Dalmatians.

In fact, One Hundred and One Dalmatians signals that it will reverse our usual hierarchy of dog and human in its opening, which sets the scene by slowly zooming in on musician Roger playing the piano while an unseen narrator describes their bachelor lives as “downright dull.” Only, Roger isn’t the narrator. His dog, Pongo, is. But One Hundred and One Dalmatians does more than just provide us with a dog’s eye view of the world. This Disney classic, which sees the sixtieth anniversary of its release this month, doubles as a cleverly disguised war film.

That’s right, Pongo, Perdita, Lucky, Rolly, Patch, and all the rest become “dogs of war,” making their way back home after being caught behind enemy lines. And as strange as it might sound, the film also speaks of a certain 1960s nostalgia for World War II.

A New Direction for Disney Animation

One Hundred and One Dalmatians was the result of a financial disaster. Disney’s sixteenth animated film, Sleeping Beauty, was meant to be the studio’s magnum opus, and it took nearly a decade to make, sailing past its original release date of 1955 to open in 1959. The pressure of the project became so overwhelming that several animators developed medical problems, and the production costs soared beyond $6 million. The movie bombed. In its initial run, it made a little more than $5 million and nearly sunk the studio.

Today, Sleeping Beauty’s reputation has grown, and along with Bambi and Lady and the Tramp, it’s arguably the most gorgeous of Disney’s animated movies. But financial concerns meant that the studio would never again launch that kind of grand, expensive animation for the foreseeable future, which impacted the style of Disney’s animation for the next couple of decades. This had an immediate impact on One Hundred and One Dalmatians, which has a scrappier, less opulent visual style.

This change in style came from a desire to cut costs as well as the implementation of new animation technology. Traditionally in animation, the images would not be drawn directly onto the animation cells. Rather, animators would draw each image and then inkers — often referred to as “ink girls” because this labor was divided by gender — would retrace the original onto the cell.

For One Hundred and One Dalmatians, the inkers were replaced by a Xerox machine. This new technique resulted in lines that were more ragged, craggier as if the drawings were made in pencil rather than ink. The animators also adopted a mid-century modern style. This less polished look not only brought Disney up to date with the contemporary setting, but it also seems fitting for a story about hardscrabble dogs fleeing a fur obsessed aristocrat.

The first part of the One Hundred and One Dalmatians follows the contours of a romantic comedy, replete with a meet-cute where the two human couples, Roger and Anita, first encounter one another after Roger’s Dalmatian ties up their feet with his leash sending them toppling into a pond. The two obviously fall in love, but so do their Dalmatians, Pongo, and Perdita. As Roger and Anita get married in a church, Pongo and Perdita appear just outside, also acting out the banns of marriage. (The animators purposefully placed Pongo and Perdita outside of the church for fear that if they were inside during the ceremony, it would be seen as blasphemous).

The issue of class is of course part of the film’s central conflict. The villain, Cruella De Vil, clearly comes from old money. She looks down at Roger and Anita, a young couple trying to make it in London off of Roger’s songwriting skills. De Vil mockingly refers to him as Anita’s “Sir Galahad.” Supposedly De Vil and Anita are old school mates (whether that’s college or grade school is unclear), but it’s still odd that the two, who couldn’t be more diametrically opposed to one another, are friends. Not to give Disney ideas for their upcoming live-action prequel, Cruella, but I’m somewhat curious to know the background on their relationship beyond a single line of dialogue.

De Vil only seems interested in Anita and her family when Perdita gives birth to fifteen puppies. She offers to buy “the whole lot,” and when she’s rebuffed, she sends two bungling crooks to steal them away in the middle of the night.

Let Slip the Dogs of War

It’s at this point of the film where it makes an unexpected genre shift, from a romantic comedy to a war film. Recognizing that the humans will be of no help, Pongo and Perdita enlist the aid of all the dogs that they can through the twilight bark, a game of telephone where each dog barks out a message to any within hearing distance who in turn bark out that message and so on.

Eventually, Pongo and Perdita’s alarm that they’re looking for fifteen missing puppies makes its way to the Colonel and his friend Sgt. Tibbs, an English sheepdog and a cat. Not only are the animals named after military ranks, but the two must first translate the message, and the entire scene is reminiscent of war films where messages must be decoded.

When the Colonel and Sgt. Tibbs find the puppies, they discover that De Vil has not only stolen the fifteen, she’s also bought dozens of others in order to create her own Dalmatian fur coats. Pongo and Perdita must transport them across the snowy landscape while avoiding detection by De Vil and her henchmen. This portion of Dalmatians closely hews to WWII movies where the protagonists are trapped behind enemy lines. The Dalmatians even end up sheltering in that ever-important bivouac, the old farmhouse.

My favorite aspect of the second half of Dalmatians is how readily Pongo and Perdita are aided by their fellow dogs and other animals. The Colonel and Sgt. Tibbs not only help find the puppies, but they also aid in their escape. A nameless dog alerts them to the nearby farmhouse just as several of the puppies are about to succumb to the cold, and while bivouacking, the cows of the farmhouse fill the bellies of each puppy with milk. On the second day of their journey, a black lab tips them off that they could hitch a ride on a truck heading to London. And of course during the twilight bark, Pongo and Perdita call on the aid of all dogs in London and beyond.

There’s no hesitation on the part of these strangers either. Just like the nanny, they express innate loyalty and a desire to help others. In other words, they’re dogs. And I think this clues us in to the film’s fascinating genre shift from romance to war film. One Hundred and One Dalmatians is a film that’s nostalgic for the war effort and what that represented: a collective unity that pulled a nation together.

You can see this most clearly in the film’s centerpiece, the twilight bark. The film follows the message chain as it is passed from dog to dog, each canine running immediately to send out the message that fifteen Dalmatians have been kidnapped. Eventually, the camera pans back to reveal all of London ablaze with lights and the sound of dogs barking. This coordinated citywide effort resembles an inversion of the blitz when residents of London would all turn off their lights to stymie the German bombing campaign. But this time, instead of blacking out the city, London becomes a call to action to help the helpless.

A Call for Unity

This sense of togetherness, the film seems to be saying, is missing in the post-war period. Roger and Anita struggle to eke out their place among the middle class, and they’re preyed upon by De Vil who tries to use her wealth to shatter their family. When she’s first told no, De Vil’s response is that Roger and Anita couldn’t possibly afford to keep all these Dalmatians. Of course, by the end of the film, Roger’s music career is in full swing and they can afford not only to adopt all one hundred and one Dalmatians but to buy a place in the country.

The ending, of course, is overly simplistic, and perhaps so is the nostalgia. World War II was a devastating time for England, after all. But sixty years later, when inequality has only worsened and people refuse the most basic steps to help stop the spread of a pandemic, the message of aid and togetherness still has a hopeful ring to it. I think we would all do well to be a little less human and a little more canine.

Thank you for reading! What are your thoughts on One Hundred and One Dalmatians? Comment down below!