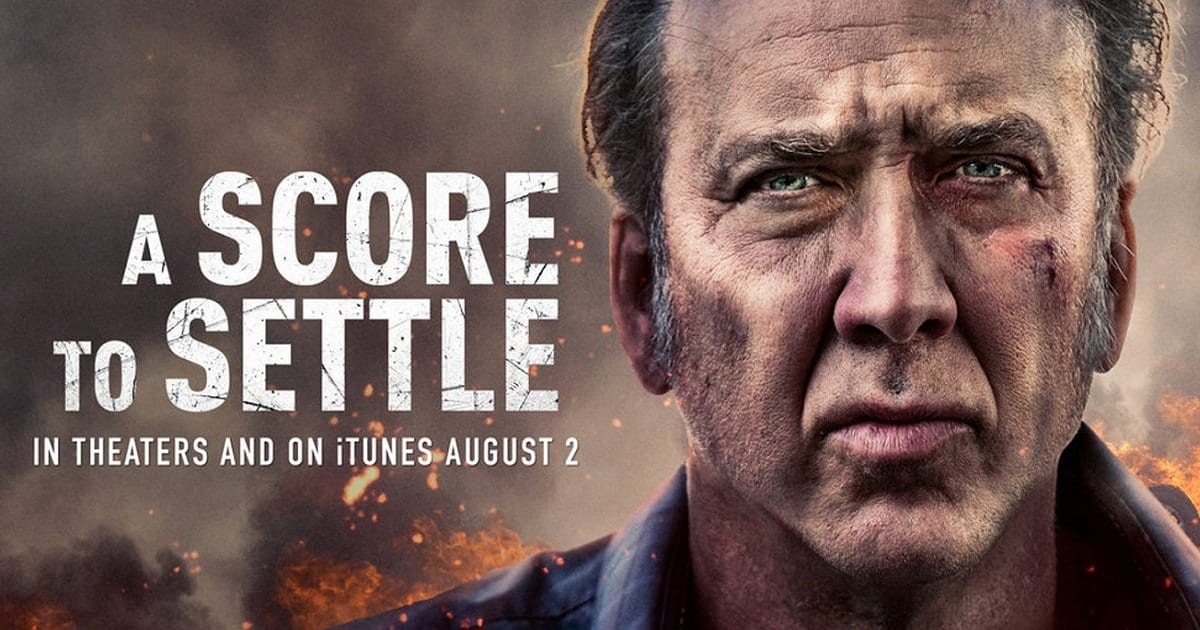 It’s time for another Nicolas Cage VOD feature! I’m not saying I’d rather watch Quentin Tarantino‘s Once Upon a Time in Hollywood — nor am I at all bitter about it not being out in my country yet — but I’d rather watch Once Upon a Time in Hollywood. There are two kinds of people in the world, those who watch Quentin Tarantino’s latest movie and those that watch A Score to Settle…

Considering the uninspiring title, the hilariously lazy poster design with that typical straight-laced Nicolas Cage expression, this is probably, most likely, going to be awful. Yet, even in his VOD ventures, Cage has managed to star in interesting and sometimes masterful pieces of cinema — last year’s Mandy is still one of the greatest films of 2018.

So let’s not be cynical here. Who knows? This film might just be another Nicolas Cage masterpiece, not just another quick cash-grab for Cage so he can continue paying for his ridiculous luxuries…

After spending nearly two decades in jail in order to protect a crime boss (Dave MacKinnon), Frank (Nicolas Cage) is released from jail. Before his release, he is diagnosed with a terminal neurological illness that causes insomnia — which will also spark the occasional hallucination.

Upon his release, he reconnects with his estranged, drug-abusing son Joey (Noah Le Gros). Wanting to make up for lost time, he digs up a lot of cash he had buried safely before his imprisonment and the two of them check into a fancy hotel that, admittedly, looks more like some rich investor’s mansion.

Even though Frank tells his son he’s out of the game, revenge is certainly on his mind. And soon, he’s packing an arsenal and going on the hunt for anyone who was responsible for taking away nearly two decades of his life.

This is Going to Be Rough

From the moment A Score to Settle begins, it’s hard to deny its clunky, even amateurish feel. I knew I was in for a rough ride. There’s an undeniable cheapness to it. It might sound snobbish, but everything about it, from its first frame to the opening credits, echoes a low-budget B-movie. It doomed the film from the start. Everything feels uninspired, from the dialogue to the cinematography. None of the actors seem like professionals. Perhaps it’s not their fault, it’s the director’s. Even so, there’s nothing worse than bad actors saying bad lines.

A smile appeared on my face the moment Nicolas Cage’s face appeared on the screen. He’s not even doing anything in this scene, he’s just sitting there, staring into space, but even so, I’m enjoying myself. His undeniable wacky charisma, even in cheap fodder like this, is always ridiculously entertaining. He doesn’t even have to try that hard, he just has to sit there.

Besides Benjamin Bratt, Cage is the only competent actor in A Score to Settle. Since Bratt only appears in a few scenes, Cage has to elevate the material. And he does, not because he’s particularly good, but because he’s Nicolas Cage. The funny thing about his performance is that I’m not sure whether he’s trying really hard or phoning it in.

Everyone around Cage is struggling. The actors are trying hard but their efforts are nearly always cringeworthy. Sometimes it’s funny, other times it’s painful. It’s sadly never painful enough that it veers into “so bad, it’s good” territory.

Noah Le Gros as Joey, the estranged son, is not as bad as the rest, but crumbles under the weight of the emotional depth needed for his interactions with Cage. The film hinges on their dynamic and sometimes, their chemistry seems to work, but it never really gets close to believable.

What you’re left with is some madcap Nicolas Cage acting. Luckily, A Score to Settle does delivers in this way. There’s a wonderful scene with Cage eating a sausage like he’s Bugs Bunny eating a carrot, while holding a gun in the other hand. One scene has Cage playing the piano and singing which is downright hilarious. The film has plenty of scenes of Cage freaking out, even bursting into tears. It’s wonderful. Cage absolutely saves this movie from being a complete waste of time. There are certainly nuggets in here which one could use for an awesome Nicolas Cage YouTube compilation.

The most surprising element of A Score to Settle is that it’s not a mindless action film. The title makes you believe it’s some Bulgarian-produced action fluff, but it’s not. It wants to be a serious crime drama. There is violence, but it’s admittedly sparse.

It wants to a serious character study of a man filled with regrets, a man who wants to avenge his past and rekindle his relationship with his son. The plot point of his neurological disorder, making him hallucinate from time to time, is actually interesting though it’s never satisfactorily explored.

The script is definitely an issue. It’s filled with clichés and obvious twists. It has nothing original to say; we don’t see anything that we haven’t seen before.

A Score to Settle is definitely not good, but it’s a good reminder of the talents of Nicolas Cage and how wonderful he can be when he’s used properly. Every time Cage is on screen, no matter how cheap everything feels or how awful his co-stars are, you are definitely entertained.

It’s most surprising aspect is how it tries to be a serious drama. So if you’re hoping for a moronic action film, this is not it. When the action does kick in, however, the clunky scene choreography leaves a lot to be desired.

Its biggest problem, besides the lackluster script and awful acting, is director Shawn Ku. Perhaps he simply lacked the necessary resources, but the film has no sense of style. A great director could have made something out of this — though admittedly, the script would have needed a massive rewrite. It doesn’t necessarily feel like a hack job. I’d even argue there’s an earnest feel to the proceedings. But it simply doesn’t work.

So thank god for Nicolas Cage.

Thank you Cage. Image via Tumblr.

Thank you for reading! What are your thoughts on A Score to Settle? Comment down below!

[…] vehicle. What’s it going to be this time? Is it going to be some forgettable VOD schlock like A Score to Settle? Or is he actually going to be in something worthwhile like Color Out of Space, perhaps even […]

[…] none other than Nicolas Cage. Cage has managed to revive some dignity after starring in countless VOD fodder, especially with films like Dog Eat Dog, Mom and Dad, and […]

Our Most Anticipated Films of 2021!