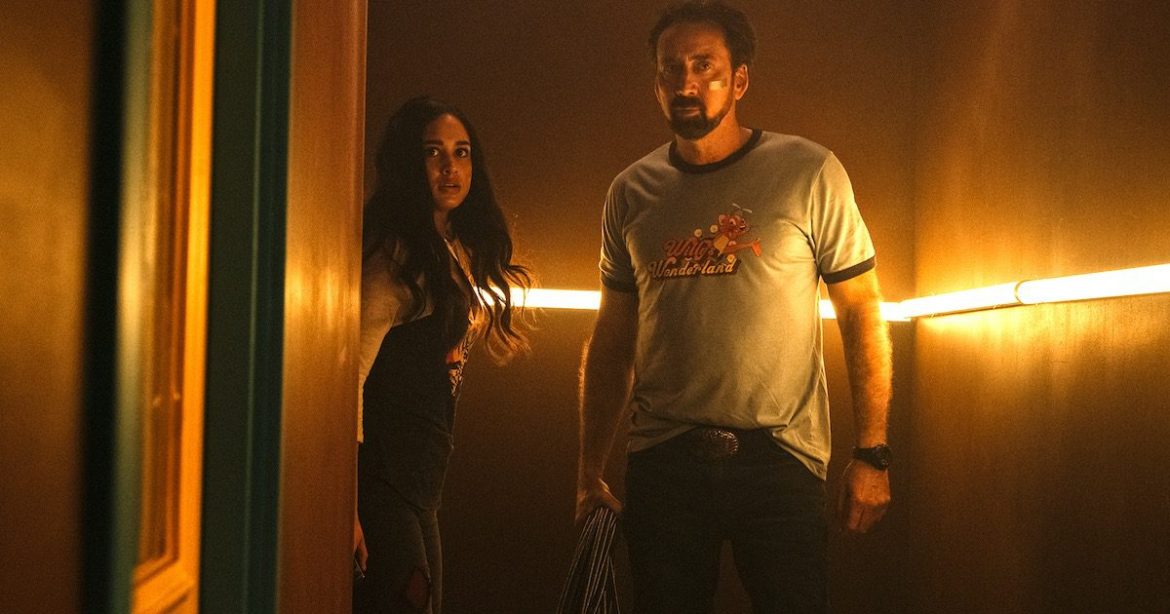 Ladies and gentlemen, it’s time for another Nicolas Cage vehicle. What’s it going to be this time? Is it going to be some forgettable VOD schlock like A Score to Settle? Or is he actually going to be in something worthwhile like Color Out of Space, perhaps even majestic like Mandy?

Today we have Willy’s Wonderland! In WW, Cage plays a mute drifter (credited as “The Janitor”) whose car breaks down in a strange, desolate town in Nevada. The economy of this town was decimated after their popular children’s entertainment center called Willy’s Wonderland became the center of a violent satanic ritual. According to the town legend, demons have now possessed Willy’s Wonderland cast of anthropomorphic animatronic critters, and they have a taste for blood.

Nonetheless, Willy’s Wonderland owner, Tex Macadoo (Ric Reitz), is committed to reopening the place and offers to pay the car repair for the Janitor if he spends the night cleaning up the mess inside the Willy’s Wonderland establishment. With no other options, the mysterious janitor agrees.

But during the night, as expected, these animatronic critters come to life. Meanwhile, a group of teenagers, who’ve grown up with the legend of Willy’s Wonderland, band together to burn the establishment down, saving the Janitor in the process.

But this particular Janitor doesn’t need any help. This Janitor has a job to do, and he won’t let a bunch of possessed animatronics stand in his way…

Even if the film is some VOD schlock, Nicolas Cage will certainly be the best thing about it. In comparison to Bruce Willis, who seems to have lost all passion for his craft and acts as if he was forced onto the movie set, Cage seems genuinely invested in the material.

In fact, out of all the movie stars who dive into low-budget/Eastern European schlock to escape the perils of tax creditors, Cage always seems to come out with his dignity unscathed. One reason for this is that his over-the-top performances and eccentric mannerisms have been the subject of innumerous hilarious YouTube compilations. He’s long past the Academy Awards-winning performer we knew from Leaving Last Vegas; he’s so much more now. He can still deliver an equally great performance: see 2013’s Joe. But he can also chew the scenery like no other. Cage is, without a doubt, one of the greatest over-actors of our generation, probably one of the top ten in movie history.

In other words: no matter how bad the film is, Cage is always so entertaining to watch. He actually tries his best, no matter how poor the script. This is why if you have to watch VOD schlock starring a big-name film star who isn’t headlining big blockbusters anymore, go with Nicolas Cage.

This brings us to Cage’s latest madcap piece of cinema Willy’s Wonderland. How does it fair among Cage’s fascinatingly bizarre filmography?

On the surface, the film seems to be manufactured for me: a gore-fueled horror-comedy filled with practical effects and a score that emulates John Carpenter’s rock n’ roll soundtracks (closer to In the Mouth of Madness than say, Christine). Add an eccentric dose of Nicolas cage in the mix, and you’ve got yourself a nice genre stew.

Unfortunately, Willy’s Wonderland is one of those cases where a film’s numerous flaws stop you from absolutely loving it. Many of these flaws stem from the film’s stylistic choices, especially during the action sequences. Perhaps to hide its low budget, we get a lot of close-ups and uses of shaky cam whenever there’s an action sequence, making it sometimes hard to see what’s happening. It distracts from the ridiculous fun of what’s on the screen — there’s also a strange abundance of lens flares that would make J.J. Abrams blush.

Personally, I wouldn’t have been ashamed of the low budget. Let the effects look phony, that’s partly the fun. Say what you want about the recent Puppet Master reboot, at least it reveled in its inventive low-budget effects, which only added to the humor.

The effects are commendable, however. There are uses of animatronics, CGI, and just people in rubber suits. The CGI effects are the worst of the bunch, but I can’t really blame the filmmakers for going in that direction: in those instances where they do use it, it was probably the only possible way to do it justice. We need more filmmakers opting for practical effects rather than CGI.

This leads us to the film’s biggest problem which is its vapid supporting cast. I understand that the filmmakers didn’t take the story very seriously. I understand it’s a throwback to eighties slashers which often featured a cast of vapid characters. But that doesn’t excuse the film. In fact, many classic eighties slashers actually had a host of likable characters. Take Wes Craven’s Nightmare on Elm Street, for instance: its teenage cast members might not necessarily be deep, but they are likable. You didn’t want them to be chopped to bits by Freddy Krueger.

Either make them likable or enjoyable. Even with the film’s short runtime of 88 minutes, every scene with these teenagers is a chore to watch. There’s no tension when they’re in peril; there’s just waiting for the inevitable. Only Emily Tosta as Liv Hawthorn gets some semblance of character development, but beyond her origin story, there’s not much there — though she does have one of the film’s funnier scenes alongside Cage’s character.

Outside Cage and the teenagers, there’s also veteran performer, Beth Grant. Grant is always a joy on screen. She has perfected the role of a horrible, stuck-up shrew. Unfortunately, she doesn’t get much to do in Willy’s Wonderland other than spout exposition.

As expected, the best thing in this movie is Nicolas Cage. Even though he doesn’t say a single word in the film, he’s a continuous joy to watch. Cage goes all in, entering the screen in a souped-up sports car, donning mirror-reflected sunglasses and a motorcycle jacket. As per usual, Cage looks both ridiculous and badass at the same time.

The janitor fits closer to your typical Western hero. His sports car could easily have been a horse, riding into town while minding his own business, only to then find himself into some trouble and save the town in the process. He isn’t interested in being a hero, he just becomes one. He’s the type of single-minded character you see in a Walter Hill film. He just wants to have his car fixed.

The character itself is so enjoyable that I wished he would have starred in a better movie. No matter what happens to the Janitor, he seems to take it all in stride. A demonic animatronic is trying to kill him? Well, he just bashes its brains out, bandages his wounds, puts on a clean t-shirt, cleans up the mess, and continues on with his mission. Nothing fazes him. He probably saw weirder stuff in the past.

The Janitor does adhere to a strict diet of energy drinks. A timer on his wrist even notifies him when he needs his boost of caffeine. If you’re going to see this film, expect to see lots of shots of Cage gulping down energy drinks. At times, I was reminded of Jim Jarmusch’s maddening monotone classic, The Limits of Control.

The Janitor also an affinity for Willy’s Wonderland pinball machine. Forget the gory spectacle, the most entertaining scene in the film involves a hopped-up Nicolas Cage playing on a pinball machine, grooving to a synth-fueled pop song.

Ultimately, it’s Cage that makes this film worth watching. As genre pastiches go, Willy’s Wonderland has too many flaws for it to become a cult classic. But it’s enjoyable enough, thanks to Cage’s dependable zaniness; and truth be told, I would gladly see another adventure starring The Janitor.

Thank you for reading! What are your thoughts on Willy’s Wonderland? Comment down below

[…] loud and bombastic. It’s exciting and clear-cut. While Sparke does utilize techniques such as shaky cam, at times, the majority of the action is understandable and easy to follow. Although a few of the […]