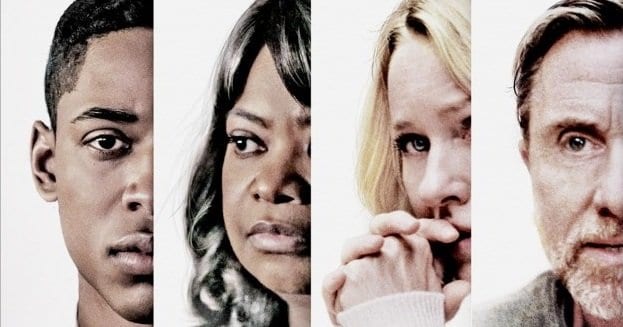 Whether we’re conscious of it or not, we all abide by certain societal expectations. Some are harmless, some are exactly the opposite. Luce understands this idea and wishes to discuss it head-on, weaving demanding racial themes within the skin of a psychological thriller. In that sense, Luce is very much the latest lightning rod film from Neon, which is carving out its own niche in the indie marketplace by releasing one provocative film after another. It doesn’t necessarily fire on all cylinders, but one thing is certain: Luce will stir up plenty of discourse.

Luce Edgar (Harrison Jr.) is the model student of his high school. After his parents Amy (Watts) and Peter (Roth) adopted him from war-torn Eritrea as a child, he has become nothing short of an ideal young adult. He routinely gives impassioned speeches, receives great grades, and excels as a member of the school track team. He’s what every student should aspire to become.

But those feelings of admiration turn to concern after Luce submits a paper to his teacher Harriet Wilson (Spencer) written in the voice of a historical twentieth-century figure which makes alarming statements about political violence. As Harriet becomes wearier of Luce and possibly disturbing information that threatens his integrity comes to light, Amy and Peter are forced to confront the idea that Luce may not be a shining, outstanding citizen after all.

Julius Onah is Hoping for a Reboot

You may not know of Julius Onah solely by his name, but you know his last directorial project: The Cloverfield Paradox. Oof.

Although that film isn’t the big break that Onah was hoping for, it was obviously a product of studio meddling. From reports of Paramount retrofitting the film into the Cloverfield universe to consistent rewrites, it was a categorical failure from all parties involved. Judging Onah harshly for the final product is a bit silly. Like so many other directors this decade, he was given the keys to a large franchise after a few smaller projects, acting more as a director for hire than a director with a vision.

Thankfully, Sundance is not only a place for new voices to get their start, but for artists to undergo a bit of rebranding. That’s precisely what Onah accomplished with Luce. The incendiary film establishes the director as a creative force with a lot on his mind. It’s highly complicated, which works perfectly for a distributor such as Neon that enjoys marketing and releasing hot-button films.

For many, I imagine that Luce will be a love-it-or-hate-it kind of film with little in between. Naturally, that’s by design as Onah uses the content adapted from the stage play of the same name to address some of the more thorny ideas surrounding minority groups in the United States. Luce calls out tokenism — the idea of singling out a small number of people from underrepresented groups to give the appearance of total equality — explicitly, utilizing its characters also as a means to display drawn-out monologues on race in America. Although Luce Edgar is a thriving member of the community, the script dives into the possible hypocrisies of the system propping him up so that it can pat itself on the back for a job well done in creating a successful African-American adult. Like a massive company that is nearing bankruptcy, Luce Edgar is too big to fail.

The psychological warfare comes fast and furious. (Or, considering the official title of Hobbs and Shaw, a better way of saying it would be Fast and Furious Presents: Psychological Warfare.) It’s a dizzying, almost hallucinatory experience at times. The character of Luce is all gray area, shedding light on the idea that we don’t all fit into the boxes that society wishes to put us in nor should our personal histories totally define who we are. Luce drives at our inherently messy nature, dripping with searing commentary in almost every line of dialogue. ‘Luce’ asks many questions that we simply don’t have the answer to in society. Image via One News Page

Luce is Full of Fantastic Performances

Kelvin Harrison Jr. plays the duality of Luce magnificently. When he turns on the charm, he has shades of an incredibly charismatic politician, disarming his audience with each eloquent speech and conveying a moral center that seems to always be in the right. But as you quickly find out, that personality quickly turns wonderfully devious as Luce gets caught up troubling matters with Octavia Spencer’s Harriet and other characters.

Speaking of Octavia Spencer, she develops a perfectly toxic relationship with Harrison as they share verbal jabs throughout the film. You see the all pieces coming together as the tension grows between these two characters. You’re simply waiting for the moment when it all comes crashing down. Spencer and Harrison’s rapport is not only the driving force of the film, but always captivating to watch.

And as you might expect, Naomi Watts and Tim Roth are great in their roles as well. As the white parents of a boy they adopted out of war-torn Eritrea, Watts and Roth are Luce‘s analogs for the topic of the white savior complex, which adds to the already rich themes on display. Watts is superb as a mother who can’t possibly imagine that her son may be up to no good. Whereas Roth, in typical Roth fashion, is hilariously fed up with just about everything as one possible revelation comes after another. 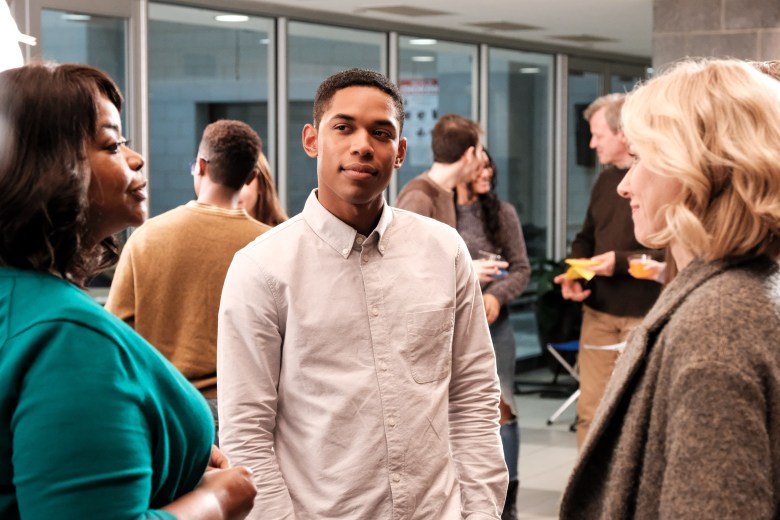 These three command your attention. Image via IndieWire

Being a Thriller vs. Engaging in an Intellectual Discussion

Luce is one of the more provocative movies to come to theaters in quite some time; it’s undoubtedly a rich text. It’s also undoubtedly uneven.

The main issue that Luce comes into contact with time and time again is the way in which it conveys its themes, which sometimes feel exploitative rather than thought-provoking. It stems from Luce desire to also be a pulpy thriller of sorts, leading to faulty staging of set pieces that undercut the strength of its ideas. It becomes tasteless as the shocking moments reveal themselves. One item featuring Harriet’s sister feels especially wrong-headed, failing to understand the humanity in the character.

Luce is also perfectly happy to leave the viewer without all the answers, which can certainly be a rewarding experience when done correctly. However, in the pursuit of those answers, Luce can also feel like a wild goose chase, spinning the audience in circles as it plays with whether or not Luce is culpable in the events that transpire. Not because of an overarching purpose mind you, but because it wants to. It’s hellbent on providing thrills, and I often wondered if all of its twists, turns, and revelations were necessary in the end. Although it’s wonderfully complex in its subject matter, it’s also needlessly complex in its narrative construction.

‘Luce’ may feel exploitative at times. Image via Yahoo

I find myself consistently struggling with Luce. In some ways, I imagine that’s precisely how Julius Onah wanted me to feel. However, I still find myself also struggling with how the film chooses to present itself. It’s a deeply sophisticated conversation covered by the skin of a lurid thriller; many ways in which Luce stages its set pieces feel slightly half-baked as if they’re after different aims than what the core of Luce is chasing. There’s an inbalance between attempting to thrill the audience and making poignant remarks about the society in which those audience members live.

But that fact remains, Luce is unbelievably daring and willing to tackle heavy, complicated ideas with great gusto and passion. I appreciate its reckless abandon and furosity. Unlike many limp attempts at social commentary in film, Luce puts itself out there, sticking its neck out as it looks to have a verbal sparring match with whoever thinks differently. It’s that figurative “COME AT MY BRO” spirit that most commentaries lack.

You will struggle with ‘Luce’, and that’s probably the point. Image via Variety

Thank you for reading! What are your thoughts on Luce? Comment down below!

[…] based on a true story drama has been going strong at its domestic box office. Penguin Bloom stars Naomi Watts as a woman that experiences a deeply traumatic event while on holiday in Thailand (no, not that […]

[…] I really just want to know how Perrault was able to get a mail route in what was probably still a racist country. How did Françoise get partnered with him and why was she in Alaska in the first place? Who is […]

It looks interesting, the only reason I haven’t went to go see it is because critics are saying that there really isn’t an obvious end. I have to be in the mood for those type of movies.

Honestly my favorite movie of the year to this point. But, I definitely connect with many of the themes more than some might. Thought it was a tremendously acted movie that evolved from simple drama to unpredictable thriller which was kind of unique.

I don’t blame you! Although I had my share of critiques about it, I still think it’s deeply fascinating and poses so many unbelievable questions. I’ve definitely been thinking about it a ton, that’s for sure!