‘Blinded by the Light’ is So Damn Corny, But So Damn Sweet and Endearing 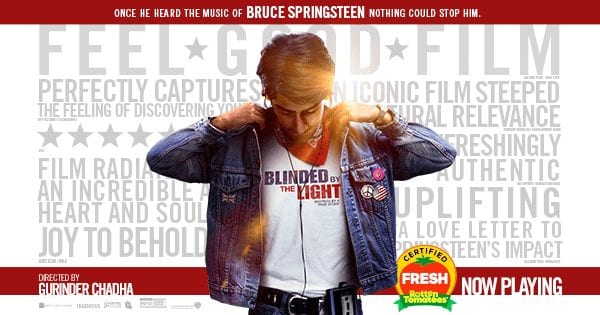 Spend five seconds scrolling through Twitter and you’re immediately inundated with existential dread from the impending doom of our entire species. The Amazon is up in flames, many countries are on the verge of political collapse, Liam Hemsworth and Miley Cyrus split up, you name it! We cannot escape the tragedy!

With all that we encounter daily, our entertainment seems to reflect it. The state of the world and art have always had a mirroring relationship, with film acting as a bit of a comment on the times. Film has served this purpose since its inception; this idea isn’t even close to novel. But what is novel is when a movie like Blinded by the Light comes around and fills theaters with hope and optimism…and that’s it! No tricks, no catches, just joy. In 2019, we should cherish movies like Blinded by the Light more than ever — the overly earnest, responsible movie is one we hardly get nowadays.

A lover of poetry and writing, Javed (Kalra) is struggling to balance his passions and find his voice with the requirements put upon him by his demanding father Malik (Ghir), who wishes for Javed to have a better life yet has a preposterously narrow view of what “better” could be. Malik is the typical demanding, narrow-minded father — the kind that wants his kids to grow up and be either an economist, a lawyer, or some other stable, but extraordinarily unadventurous member of the workforce.

Having just lost his job, Malik explains to the family that they will all have to pitch in, leaving Javed with little wiggle room to explore his hobbies. Malik routinely scolds Javed for pursuing his passions, telling him to find a “real job” and provide for himself and his family.

Frustrated by the limitations set by his father and the blatant racism he encounters in the streets, Javed feels lost, that is until his friend Roops (Phagura) introduces him to the music of Bruce Springsteen. Instantly, The Boss’ music ignites Javed’s rebellious spirit, speaking to him in a way that he’s never felt before.

All the tropes are in line at the start of Blinded by the Light. You have the overbearing father, the main character that can’t take full advantage of his passion, the quirky friends, the love interest, a rebellious desire, the reassuring teacher that empowers the main character to explore their passion, you get the picture. Blinded by the Light is so brazen in its willingness to embrace clichés that I found myself oddly impressed. Mr. Evans, the next-door neighbor character to Javed and his family played by Scottish actor David Hayman, is almost an egregiously obvious moral support mechanism for Javed as the high schooler struggles to find himself. It’s almost as if Blinded by the Light has little to no knowledge of the history of movies, packaging this assortment of characters and ideas together like it’s the first to do so.

In a world where many high-profile movies are not only actively commenting on their genre’s conventions, but also the idea that they’re blatant products of the system (i.e. just about everything in Phil Lord and Chris Miller’s filmography), it’s almost bizarre to see a movie attempt to capture familiar stories and structures with the utmost respect and without an ounce of cynicism. Yet I admire that Gurinder Chadha embraces these archetypes with the warmest, most tender hug that she could muster. Yes, Blinded by the Light is very familiar, but very few movies have this amount of love and admiration for their material. It consistently borders on becoming maudlin, but there’s always enough true emotion to keep the joyful, blissful spirit of the film from turning nauseating.

Bruce Knows the Way to Your Heart

Much has been made of recent high-profile movies to place a strong emphasis on music as a way of telling the story, both successfully and unsuccessfully. Blinded by the Light is inspired by the words and tunes of Bruce Springsteen and not a standard biopic like Bohemian Rhapsody or Rocketman. It’s more in the vein of movies like Sing Street which use popular music to underscore the problems of regular people, explicating the characters’ fears, desires, and hardships — and our own as well — in ways that only music can.

Blinded by the Light is very successful in that regard as the use of Bruce songs enriches the drama while also explaining why so many love Springsteen’s music in the first place. It also helps that the film is based on Sarfraz Manzoor’s life — he’s seen Bruce in concert over 150 times!

Springsteen has always worn his heart on his sleeve when it comes to his lyrics and performances; Blinded by the Light operates similarly. Memorably, the words of popular Springsteen songs whirl around Javed’s head and his environment during his first encounter with the musician’s work. No scene shows this better than when Javed, Eliza, and Roops prance around town to the tune of “Born to Run”, dancing goofily as they run by unsuspecting townsfolk. Characters will often burst out singing as onlookers scratch their heads in confusion. For these characters, Bruce helps them to express themselves in ways that they simply couldn’t before. It’s also done in a visually interesting way.

A Thoughtful Story with Plenty of Emotion

There’s a certain logic that comedies adhere to that Blinded by the Light also follows, except it replaces jokes with pure emotion. Take something like Family Guy, which routinely extends jokes far beyond the point where they stop being funny and keep going, only to make the entire bit funny again. Blinded by the Light is deeply committed to telling a heartfelt, loving story, so much so that it stops being effective and quickly comes back around by the end. Gurinder Chadha wants to overload the audience with love and kindness. You might have an initial aversion to the film’s tactics, but it will win you over soon enough.

The sentimentality isn’t misguided, either. A major subplot in the film is Pakistani people’s fight against bigotry, most notably by the National Front, the far-right political party which is still operating today in the U.K. Although characters frolic freely to Bruce Springsteen songs, Blinded by the Light doesn’t shy away from sticky subjects, making this quest for self-realization truly inspiring.

With a level of effervescence that rivals just about any other recent film, Blinded by the Light quickly joins the likes of The Farewell as 2019 movies that are so thoughtful and kind-hearted, that you’re basically an asshole if you pan them.

Blinded by the Light isn’t necessarily inventive in telling a character’s story to the tune of sweeping, popular lyrics that underscore the present mood, but it’s certainly effective and unabashedly in love with the music it’s displaying, much like the real-life figures on which this story is based.

Just sit back, relax, and let Bruce (and Gurinder Chadha) tell you a long-winding, emotional story of suffering, love, and, ultimately, reconciliation.

I challenge you to hate this film! Image via The Hollywood Reporter

Thank you for reading! What are your thoughts on Blinded by the Light? Comment down below!

[…] charming boy, while also coming to terms with her past love. While sometimes a bit cliché in its sentimentality, Summerland is a genuinely moving portrayal of family and love in a time when it was hard to […]

[…] of the audience, elicits some sort of positive emotional response (like crying or smiling), or is just plain corny. This could mean romance, but really any movie with a cute character or scene could […]

[…] of genuine tension in a film that is so manicured and contrived. It was the one moment where the Dean-Charles Chapman and George MacKay were reacting instead of carefully recalling their pre-planned […]