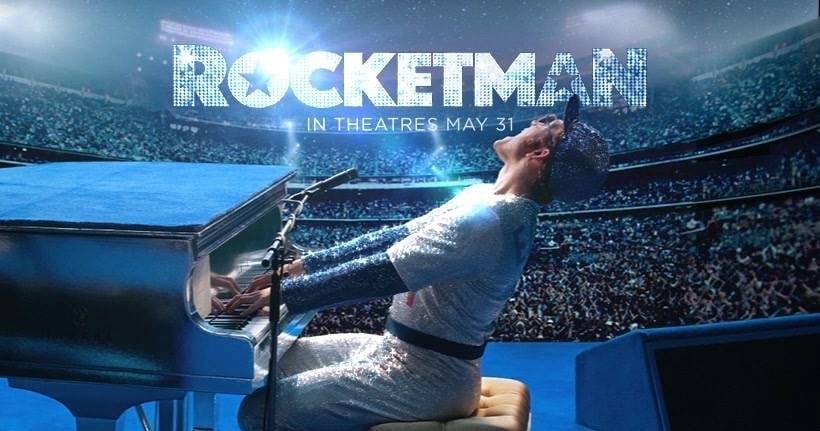 We have now found the new trend for studios without access to comic book IP: high-toned biopics. Or, better yet, musical biopics. It’s especially important for Paramount to cash in on such a trend, as their struggles over the last few years have been well-documented. Enter Rocketman: the fantastical story of Elton John. And while I struggle to keep my cynicism at bay when looking at the entire picture of this movie, I think it’s going to be a long, long time before such a cliché biopic succeeds as well as Rocketman.

(Sorry for the pun; I couldn’t help myself.)

Before he was Elton John, Reginald Dwight (Egerton) was a shy London kid struggling to follow his passion. And even when his big break came, shaky relationships with his family and inner circle — minus Bernie Taupin (Bell), who has still not argued with Elton to this day — threatened to derail him at every turn, leading to some serious lows with drugs and just about every other vice imaginable.

Bohemian Rhapsody was a shocking hit when it debuted last fall. Everyone loves Queen, everyone loves Freddie Mercury; it was an easy sell and an easy winner at the box office. But nobody thought that it would do that well. It finished with almost $904 million worldwide, enough for the 6th highest grossing movie of 2018. Though the film wasn’t exactly an “original” idea, it was still the only non-superhero or franchise film in the top 10.

Meteoric successes like Bohemian Rhapsody have a way of resetting the market, even if musical biopics aren’t even close to being labeled “new” or “innovative” anymore. We’ve already seen Netflix do their best to add to this wave with The Dirt earlier this year, and Reneé Zellweger will be stepping into the role of Judy Garland later this year in Judy. Similar to seeing their favorite comic book character onscreen, there’s something mystifying about seeing famous showpeople in a film. I imagine that we’ll see a glut of musical biopics in the next few years.

(I can’t wait for Hollywood to run out of ideas in a decade and greenlight the Yelawolf movie.) 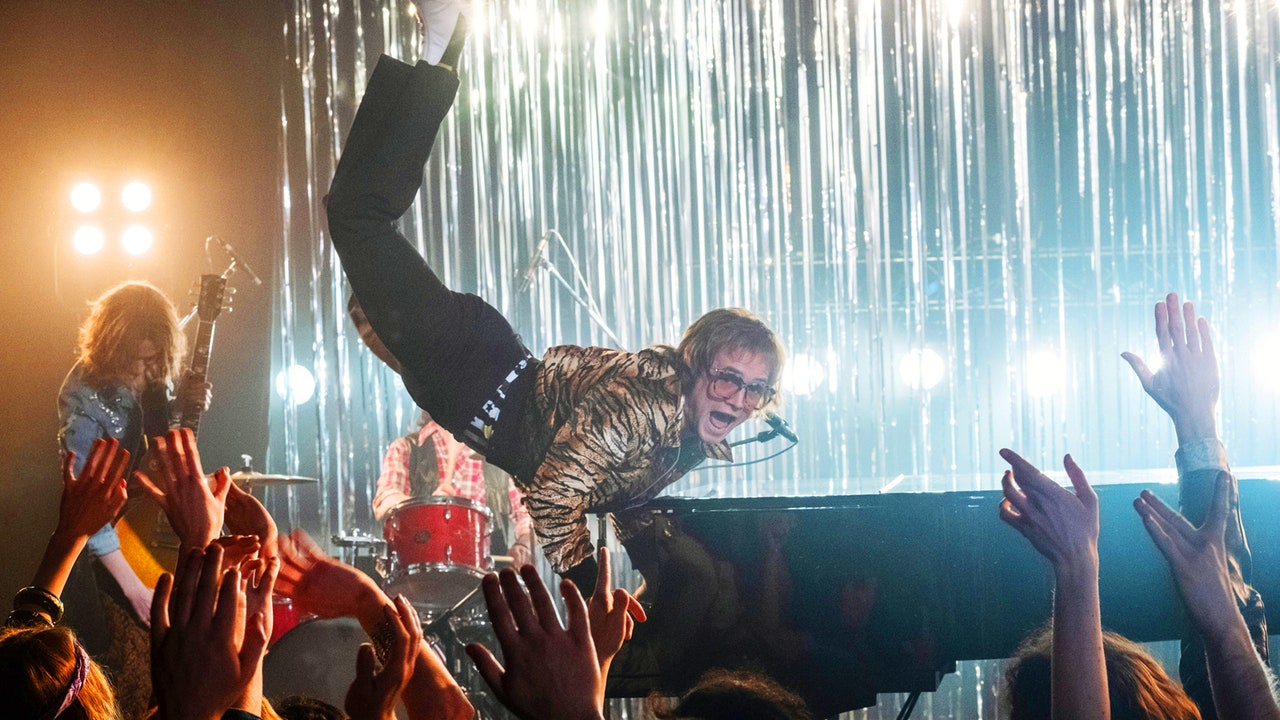 Elton has a sick vertical. Image via GQ

After seeing Kingsman, I immediately bought Taron Egerton stock and hoarded it from just about everyone else. He’s always had that debonair, eye-winking swagger that differentiated him from the rest of the rising stars around his age. One could say that he’s even been a little misused or underutilized; even in the middle of the debacle that was last year’s Robin Hood, he wasn’t the problem. That stock I’ve kept to myself for the last few years has hit some lows lately, but it’s now at its 52-week high, and there are no signs of it ceasing to rise any time soon.

Every pundit is marking Rocketman as Egerton’s step forward into the realm of prestige acting — it’s worth noting that 11 of the past 15 Best Actor winners have played a historical figure — and I could foresee a path where Rocketman becomes a breakaway hit and Egerton claims a nomination. He’s really going for it, putting the requisite energy into every moment.

Unlike Rami Malek as Mercury, Egerton’s performance feels less like an impression, and more of an evocation, using his own charm and applying an Elton John filter to it. It also helps that he’s actually singing the classic songs that you know, and he’s doing a pretty damn good job of it. 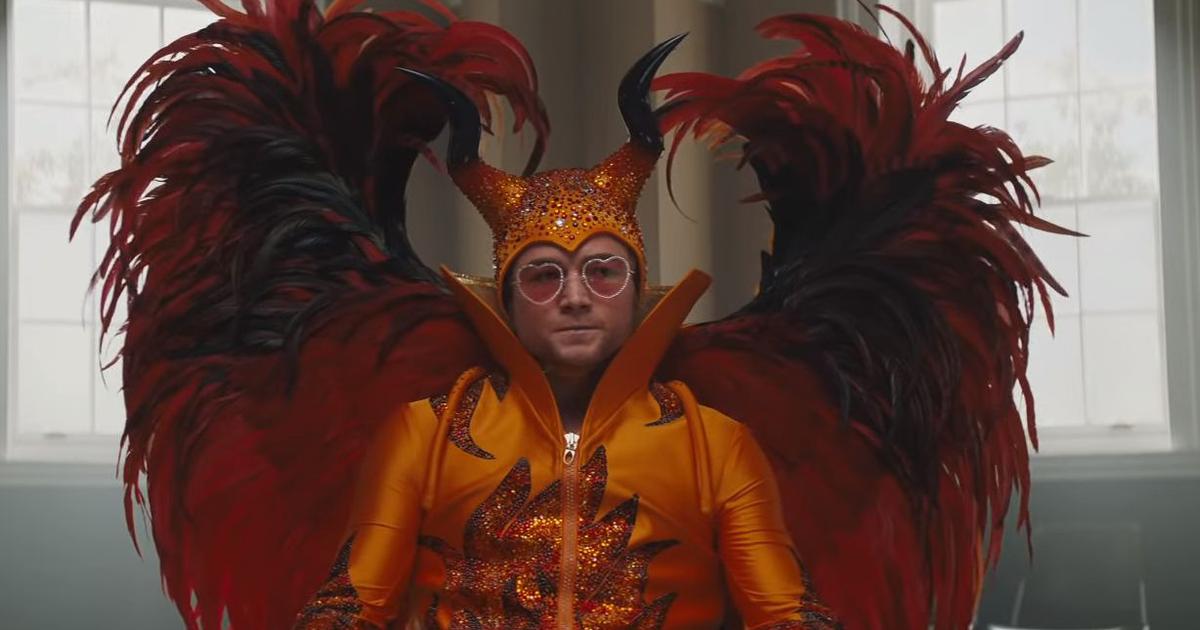 The calling card of Rocketman is unquestionably its fantastical elements, where characters break out into ornate song and dance numbers to the tune of one of Elton’s songs. Each is a great embodiment of the song itself, acting as either a psychological evaluation during the time in Elton’s life in which they were written and conceived, or just as a rousing good time.

I always have an issue getting over the artificiality of seeing movies break out into song since it rarely seems to fit into the story being told. But that’s precisely why I appreciate Rocketman — the songs themselves are an effective break from the reality of the film.

They’re rarely ever subtle — you made everyone float when Elton plays a song; I see what you did there, movie! — but in the grand scheme of things, I can’t say that I have too major of a gripe with it. These sequences make for some of the best “holy shit, movies are awesome” moments in all of Rocketman. They’re operatic, bellowing to the cheap seats while leaving the viewer in pure awe. A lot of this feeling comes from character reactions — especially Jamie Bell’s Bernie Taupin — which imbues a sense of wonder and magnificence into the film.

Peep Richard Madden in the background thinking that Elton is a fool. Image via Spicy Pulp

The Rise and Fall (and Rise Again)

You would think that after Walk Hard mercilessly mocked the musical biopic back in 2007 that studios would shift gears from the standard rise, then fall, then subsequent rise again in their glorifications of music icons. Rocketman is a lot of fun in parts, and surprisingly harrowing in others, but that doesn’t change the fact that we’ve seen a version of this story over and over again.

Upon the film receiving its R-rating, Elton John himself noted that a PG-13 adaptation of his story was not possible, as he has not lived a PG-13 life. This is certainly true, and Rocketman has widespread drug use and steamy sex that differentiates it from many of the limp, sterile biopics where the main figure at the center of the story is involved in the production. But I couldn’t help but feel that Rocketman still suffers from a lesser amount of this pressure to appease the real-life figure. Many moments feel all too comfortable to have any sort of realism; the movie is a lot less edgy than it thinks it is, which plays into the overarching sameness that Rocketman has with others in its subgenre.

Rocketman still falls back on painful storytelling clichés, including a naming scene that is in line with Han getting his name in Solo: A Star Wars Story. You have it all in Rocketman: the distant parents (one played by Bryce Dallas Howard, who is horribly miscast and offers a rather hammy performance), the imperfect romantic interests, the flaunting of excess, you name it. Thankfully, the main relationship in this movie — Elton and Bernie Taupin — is tremendous and worth the price of admission in of itself. 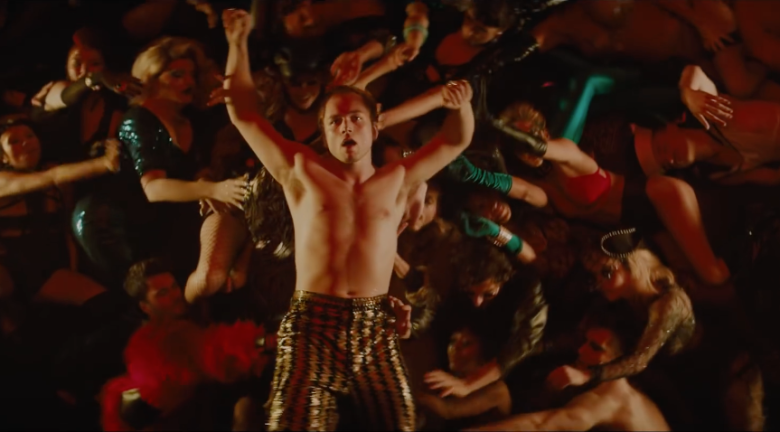 Rocketman is more of the same from the music biopic subgenre: plenty of catchy songs, an actor going for broke in the lead role, and the standard narrative depicting the highs and lows of a chaotic life. A lot of times, this makes for a frustratingly cliché and overly sentimental film; but most of the time, it’s pure cinematic bliss, especially when Taron Egerton has full rein to do as he pleases.

Best of all, Rocketman facilitates a stronger appreciation for Elton John, and it’s rarely shallow in that respect like a certain movie that was far too popular at the Academy Awards earlier this year. You’ll be blaring “Tiny Dancer”, “Rocket Man”, “Your Song”, and countless other Elton hits right after seeing it, which is one of the better endorsements a movie like Rocketman can get. 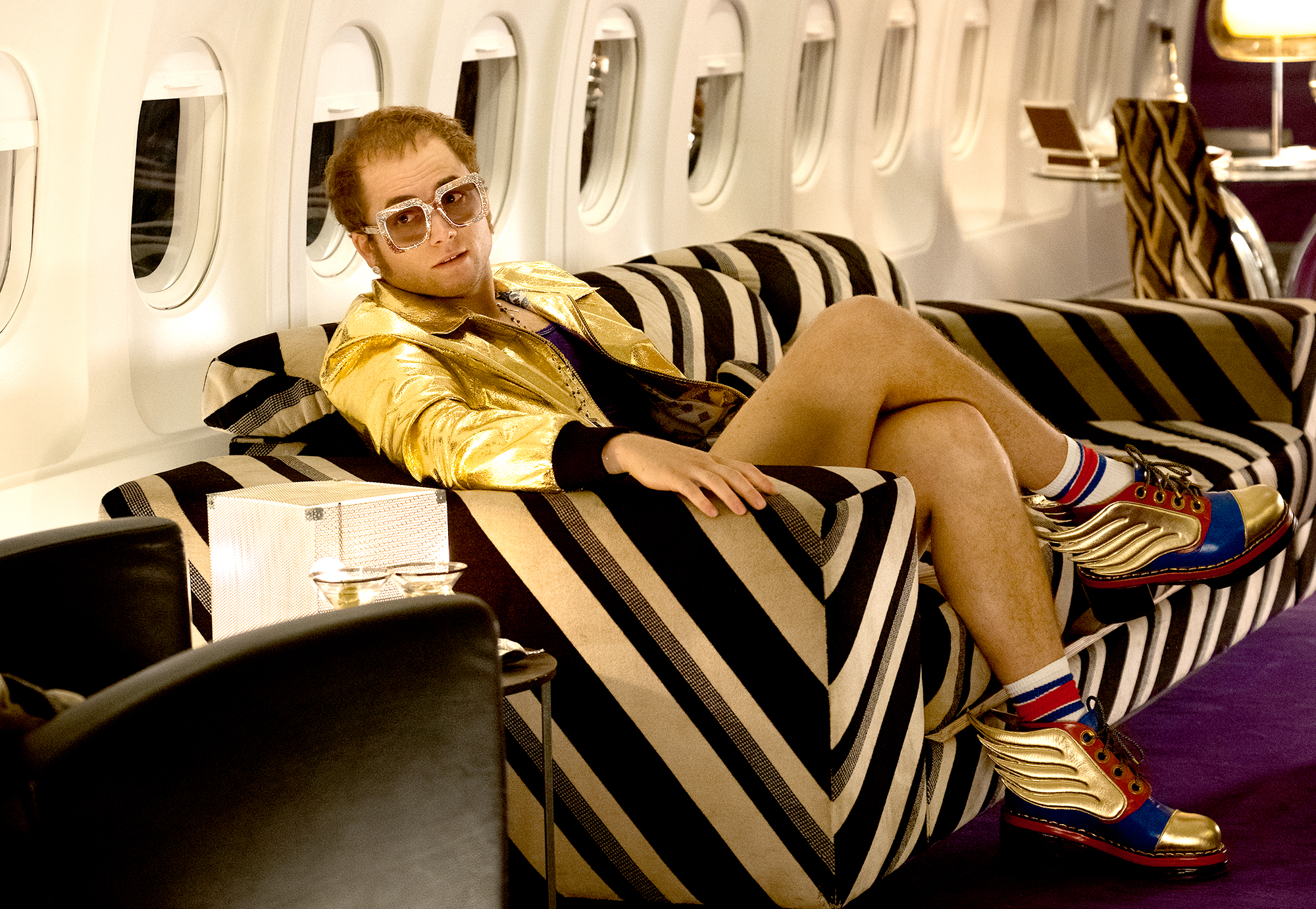 I have many questions about this outfit. Image via Us Weekly

Thank you for reading! What are your thoughts on Rocketman? Comment down below!

I loved it. Saw it at the Truro Plaza and the retro deco and sparkly foyer added to the trip. My better half was convinced I would be hating it as I’m allergic to musicals but the sheer invention and quality of the songs blew me away

I’m glad you enjoyed it! You’re right, there’s so many fun, knock-your-socks-off moments in here!

I was disappointed in this movie. I found it depressing, over-emotional, and long. Aside from Taron Egerton’s performance, it was a waste of time.
With Elton’s talent and extraordinary life, this could have been a great movie…but it wasn’t. Mediocre, at best.

You’re totally entitled to your opinion, but when a movie circles around someone who has dealt with many addictions throughout his life, shouldn’t that movie be fairly depressing in areas?

Yes, but they squeezed the good stuff onto the last 4 minutes…

I was probably biased, hoping for another Bohemian Rhapsody.

Oof we’re on COMPLETELY different wavelengths here because I despise that movie! 😂😂😂😂