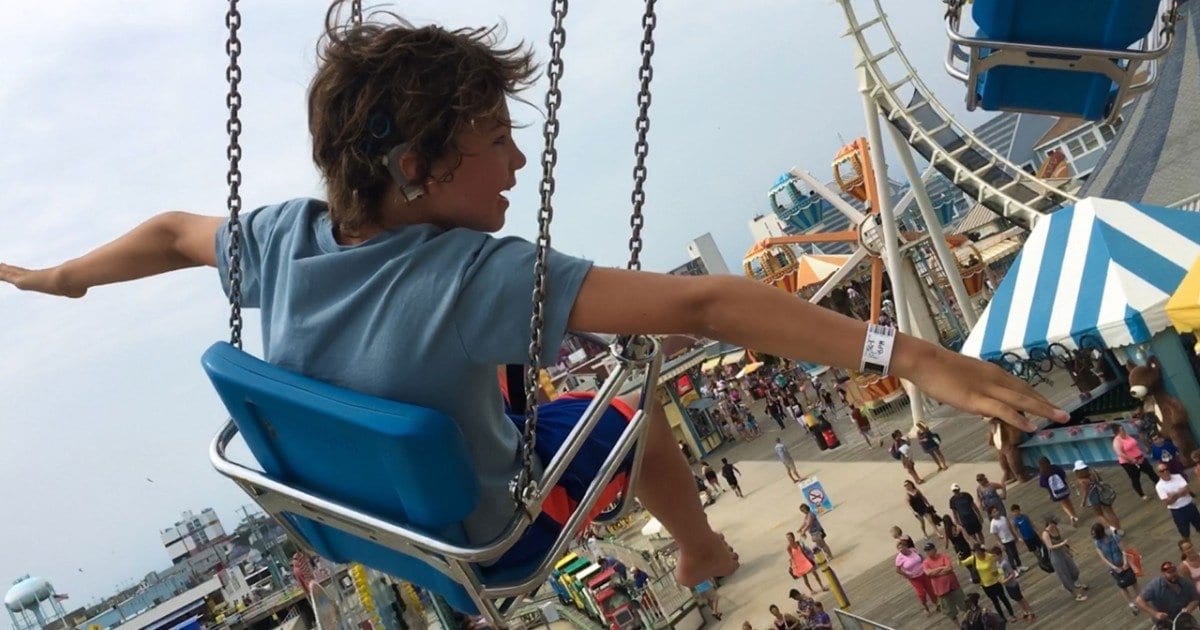 At this point, it’s a cliché to say how we take our most basic functions for granted. Hearing a loved one, having clarity of the mind, for instance. There’s also a reason why those kinds of sayings became clichés: most of the time, they’re painfully true. This is an idea that HBO’s Moonlight Sonata: Deafness in Three Movements captures so well in its tale of multigenerational bouts with not only hearing as its title would suggest, but also with music, ailing loved ones, and perseverance.

In another personal memoir caught on film, Irene Taylor Brodsky follows her 11-year-old deaf son Jonas, who after receiving cochlear implants and learning to hear, is attempting to learn and play the first movement of Beethoven’s “Moonlight Sonata.”

Though as Jonas’ hearing abilities grow, his deaf grandfather Paul’s mind begins to wane as he develops dementia in his older age. Deafness in Three Movements weaves these generational stories together, showing the parallels between them.

A Doc is as Interesting as Its Subjects

I often find myself grappling with the idea of calling individuals shown in documentaries “boring.” They’re not actors; it’s not their job to entertain this imbecile!

Clearly, there’s still a mesmerizing quality to studying people that are superficially interesting, whether it be their interesting mannerisms, beliefs or importance, or symbolism in the greater culture. It’s why documentaries about Mr. Rogers, Apollo 11, and triplets with a CRAZY story are at the center of some of the most lucrative of recent years. It’s also why Moonlight Sonata mostly succeeds in spite of its glaring deficiencies.

Jonas, the main person of interest in the film, is unapologetically an 11-year-old boy. He’s brash, a little too smart for his own good, and totally endearing. He reminds me of a younger version of a certain movie critic (without the endearing part, naturally). After two seconds of a sad baby video, you’re 100% in on his mini-underdog story. An adorable kid on a good-hearted journey is more than enough to suck me in, even in my most cynical mood.

Opposite him are his two grandparents, who have been deaf for over 80 years. The generation gap between them is apparent right from the start as Jonas’ grandparents look upon the technology that granted Jonas’ hearing in awe while also showing how they adapted to life without those same benefits. His grandfather Paul is a self-made man, a revolutionary creator as a developer of one of the first versions of instant messaging, turning his afflictions into a positive for mankind. It quickly becomes clear that being deaf was never an issue. Paul found a way to live an exceedingly fulfilled life, even using his deafness to his own benefit — which the film shows in an equally humorous and somber scene where Paul tunes out a crying young Jonas by turning off his hearing aid. In mirroring his story to Jonas’, Brodsky captures the beauty of sound — and also the beauty of the absence of it in an endearing moment where Jonas tunes out the noise and finds inner peace.

The more pressing concern is the degradation of Paul’s mind.

A documentary memoir is beholden to real-life. Contrary to popular belief, life does not have a three-act structure, nor does it fit cleanly into a specific box. These kinds of stories mutate and form as the documentarian continues to film, a fact that is obvious as the developments come in Moonlight Sonata. What is initially just a potentially uplifting story about a deaf boy learning to play Beethoven (and the obvious parallels that come with such a situation) becomes much more upon the realization that Paul has dementia.

To give you a quick peek behind the curtain: getting diagnosed with dementia is one of my greatest fears. An end comes for all us at one point or another, but failing to perform daily activities or even forgetting loved ones and the moments we share together while I’m still on this planet shakes me to my core. Moonlight Sonata unpacks this idea through Paul, destigmatizing deafness in the process. We even see an ultimatum with Paul as his wife implores that he stop driving his grandkids. It’s in these moments where Paul is struggling with his increasing limitations that Moonlight Sonata reaches its peak.

Aside from its few bits of distracting animation, the documentary isn’t very stylized. One can sense that this was never Irene Taylor Brodsky’s intention, either. She’s more interested in the ideas at play and her own emotional connection with them. This piece of the film is always palpable, no matter the focus of a certain scene.

Finding a Movie in Editing

The tough piece about creating a memoir onscreen, however, is editing it all together and striking the right balance between all its disparate parts. Brodsky often struggles to accomplish that task, as Moonlight Sonata somehow overstays its welcome in spite of its scant runtime. The documentary often repeats itself with footage of Jonas sitting at the piano and progressing through the music. What should be remarkable snapshots of progress over time is mostly tiring after some time. But not in a manner that feels inept. Rather, in a way that gives off the impression that vital footage is missing. I kept waiting for Moonlight Sonata to take a leap, to show something truly remarkable, only to see that this leap wasn’t coming.

I give Moonlight Sonata a ton of credit for trying. It switches from archival footage to vérité to standard interviews to animated interludes and repeats from there. The problem is that you can often tell that the documentary is straining to keeps its potency, trying whatever it can to seem captivating. Sometimes it works, sometimes it doesn’t, and other times, all the window dressing seems mostly unnecessary. Moonlight Sonata is obviously stitched together, which may make it struggle to stick out in a world where there are seemingly more documentaries than ever.

It doesn’t exactly cohere as you would hope, which is often the downfall of many film memoirs. Still, Moonlight Sonata: Deafness in Three Movements packs a wallop of emotion in a simple story.

Moonlight Sonata will never contend with the best of HBO’s documentary catalog, nor will it be considered as Brodsky’s finest work. What it will be remembered for is its intensely resonate point of view. A hyper-specific account that becomes universal.

Thank you for reading! What are your thoughts on Moonlight Sonata: Deafness in Three Movements? Comment down below!

[…] connecting with some of their patients, etc.), 76 Days is mostly fragmented human suffering; vérité-style vignettes capturing a holistic view of the agony in Wuhan. It may feel like a rush job at times […]

‘Downton Abbey’ is a Welcomed Return for the...