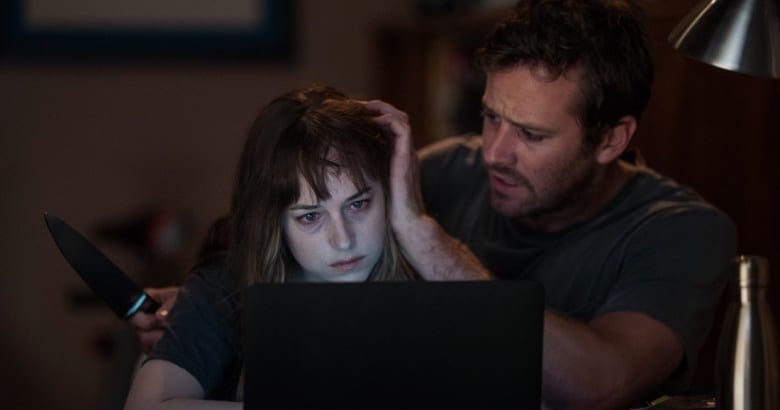 Wounds has been on my watchlist ever since I read the early reviews. It could have been the mysterious and vague premise: creepy and gross things transpire after a bartender (played by the hunky Armie Hammer) witnesses some disturbing material in a lost cellphone. The director, Babak Anvari, made an impressive horror debut with Under the Shadow. The film was based on a novella, The Visible Filth, by prominent horror author, Nathan Ballingrud — which is currently on my reading list.

I had a good feeling about it. I felt it could be something special. I’ve been wrong a few times before mind you, but I’ve been right too — in the case of Mandy and The Puppet Master: The Littlest Reich, for instance. As a horror fanatic and cinema-goer, you’re always looking for that something special. Something that stands out among the generic and soulless attempts.

Wounds turned out to be an engrossing if frustrating experience. A film I’m glad to have seen, a film that stuck in my mind. But I’m afraid that due to its unsatisfying payoff, it won’t ever be hailed as a classic.

Written By: Babak Anvari and Nathan Ballingrud (based on his novella, The Visible Filth)

Will (Armie Hammer) is a confident and charming bartender in the heart of New Orleans, someone that is well-liked in his neighborhood, especially among his hard-drinking barflies. Will is a college drop-out who has lost any pretense of ambition. All he wants to do is serve his patrons and be liked by them.

Due to being engaged in a withering love affair with Carrie (Dakota Johnson), Will finds himself regularly flirting with bar regular, Alicia (Zazie Beetz). One night, a violent bar fight ensues, involving regular patron, Eric (Brad William Henke), who gets his face slashed with a broken bottle. The bloody scuffle is filmed by a group of underage teenagers and one of them leaves their cellphone in the bar. Will finds this cellphone and takes it home with him. After seeing some panicky text messages, he manages to unlock the phone and correspond with the teenager that’s texting him, who seems to be deadly afraid about something.

Sometime later, Will finds himself scrolling through some pictures and video’s on the phone. In there, he witnesses satanic rituals, involving murder and dismemberment. Soon, a dark force is pulling Will into a strange new world, where meaning is found in the soulless depths of existence…

One thing I quickly admired from Wounds is the natural acting from everyone involved. Even though I recognize most of these faces, such as Hammer, Johnson, and Beetz, they all seemed genuine, like regular folks from New Orleans.

The dialogue, while nothing extraordinary, feels raw and authentic. The opening immediately draws you in, as Will the bartender converses with the local barflies with ease. It didn’t feel like I was watching a bunch of Hollywood folks pretending to be from New Orleans. It almost seemed like the film took a page from David Simon’s Treme.

Armie Hammer is especially good in the lead role. A seemingly likable individual, but a gross underachiever, and you can’t help but sense a lack of direction within him. It’s his performance that elevates the screenplay, which is unfortunately thin in a lot of places. As Wounds progresses, the more his character is revealed to be selfish and shallow. At its heart, this film is a journey of self-discovery and a dark character study… that sadly falls short in the end.

Wounds does have a few dithering jump scares — get ready for a lot of sudden shots of headless corpses! But there are a few effective and subtle scares, most notably one involving a demonic presence visiting Will at night. Another one involves a worrying text message to Will from Carrie, surrounding a certain… visitor.

Through the film, there’s ample tension and it never goes too far with its visuals. When the spookiness commences, you’re glued to the screen; you want to see what supernatural heights Wounds will delve into. This is because the film doesn’t want to show all its cards too early. It wants you to keep guessing. It’s nice watching a horror film and not knowing exactly what creepy madness you can expect.

All of this makes an engrossing watch. Again, it’s just a shame about the ending.

Even with all my goodwill towards Wounds, and I genuinely like it, it’s hard to deny its unsatisfactory finale. If you’re aching for explanations of the underlying mythos, you’ll be disappointed too, as the film focuses on Will’s (lack of) comprehension of the dark forces, then delving into its cosmic secrets. Thematically, the mystery aids the final scene, which I can not give away — I highly suggest you read the interview on Refinery29 with the film’s director.

When the film cut to the black, I audibly complained. I was taken aback. The ending is sudden. Don’t expect the slow build-up to a crescendo of gross-out imagery and gore. The director had an artistic intention for why he wanted to stop where he did. It’s respectable but, admittedly, a letdown.

Even accepting the ending, the film lacks a deeper introspection regarding Will’s character. We understand his vacuous nature but there’s not enough insight into him. Not enough to make this film a cohesive character study. Strangely, Wounds feels like it would have made a good episode on Tales from the Crypt, as it feels closer to being a short story than a 90-minute motion picture. It likely follows the novella loyally in that respect, but it could have added more meat for the adaptation.

It reminds me a little bit about the original ending of William Peter Blatty’s Exorcist 3, which just wasn’t as rewarding as the studio mandated ending that followed. Sometimes you need to give the audience a little more. A little more madness or a little more character development could have made this film the uniquely strange horror film I wanted it to be.

Wounds is a fascinating little horror picture that I really wanted to love. And there is certainly a lot to love, from its great acting, engrossing story, and the few effective scares.

But ultimately, it will likely alienate more viewers, even genre freaks like myself, as it seems to stop just when things were about to get crazy.

The deeper meaning notwithstanding, you need to give the audience some blood and guts, or some visual splendor, to drive the point home. Even as a character study, the film lacks the necessary depth to justify its lack of genre thrills.

Having said this, I admire its ambition and it did stick in my mind. Perhaps I will grow more appreciation for this after having read the original novella. Give it a chance nonetheless. It’s better than most of the crap that’s out there.

Thank you for reading! What are your thoughts on Wounds? Comment down below!

[…] couple of months ago, I decided to watch Romina (2017) by Diego Cohen on Netflix. I like a nice horror movie, and I was unfamiliar with the director and with Mexican horror for that matter, so I was, to say […]

Great review! I was really interested in Wounds but that ending was such a huge let down.

I thought it was like if ‘The Ring’ was remade by people suffering the effects of recent head trauma.
Why was any of it happening? God knows. You can’t throw random unsettling stuff at the screen and call it a movie.