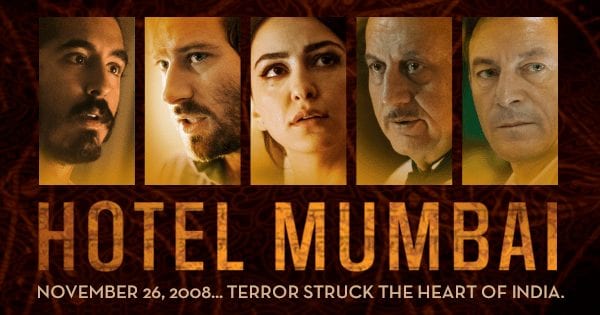 On November 26th, 2008, the eyes of the world were on Mumbai. Terrorists were openly and brazenly killing innocent civilians. Among the nearly 200 dead and more than 300 wounded were staff and guests at the Taj Palace and Tower. Their story is told in the new movie, Hotel Mumbai.

November 26th, 2008 started out as ordinary day for the citizens of Mumbai. The staff of the Taj Palace and Tower were going about their work as usual. Head chef Hemant Oberoi (Anupam Kher) is inspecting his staff and the food that will be served to the hotel’s visitors. Waiter Arjun (Dev Patel) stands by, ready to serve the food prepared by the kitchen staff.

In the lobby, the guests are checking in. Married couple David (Armie Hammer) and Zahra (Nazanin Boniadi) arrive at the hotel with their infant son and nanny Sally (Tilda Cobham-Hervey). Wealthy Russian businessman Vasili (Jason Isaacs) also checks in. They expect to have an enjoyable time while staying at the hotel. Instead, they will face a life and death situation as terrorists take over the hotel and try to kill as many people as they can.

A Real-Life Thriller with a Message About Our Shared Humanity

Events like the 2008 Mumbai attacks have a way of bringing us together. Boundaries such as class, race, religion, societal status, etc. all fade out when staring at death’s door. As it becomes clear that the terrorists’ aim is to kill as many people as possible, the survivors put their differences aside and pull together to stay alive. It’s a message that I think we all need to hear, especially when we live in an era when we are divided as a nation and as human beings.

The Villains Are Human

In many movies where terrorists are the bad guys, they often portrayed as 2D villains without a shred of humanity. Their aim is to kill, destroy, and take over without thinking of the lives of the people who will be affected by their actions. In Hotel Mumbai, the terrorists also have one goal: kill as many people as possible. But in this film, in spite of their heinous and inhumane actions, the men responsible for the killings are also fleshed out as complete human beings with human emotions and human failings.

In our post 9/11 world, it would be easy to create the stereotype of the Islamic terrorist for a film or television series. While terrorism is unfortunately part of the world we live in, those in Hollywood responsible for films or television series with narratives similar to Hotel Mumbai have a choice. They can either create another brown-skinned Muslim who is conveniently cast as the villain of the piece. Or, they can still create this character who in spite of their blood lust and hardcore belief in their mission, is still somehow relatable to the audience. 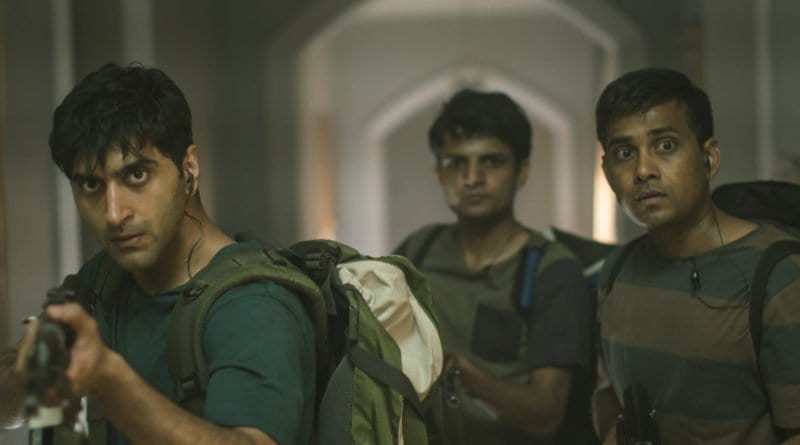 Hotel Mumbai Tells the Story of the Real Heroes

In a film like Hotel Mumbai, it is important to tell the stories of the real heroes, not just create characters based on those who lived and died during massacre. Though Dev Patel’s Arjun is a combination of two different men who were able to save lives via their quick thinking, Anupam Kher’s character is based the real head chef, Hemant Oberoi. Chef Oberoi did what he had to do to keep guests and surviving staff alive while remaining calm and level-headed. As of last year, Chef Oberoi has left India to open a restaurant in San Diego, but he remains in contact with the families of the colleagues who were killed that day.

The Women are Given Their Due

It is usually the men who are front and center of these kind of films, both as heroes and villains. At best, female characters are either collateral to be used by the villain or at worst, a background character who is killed or held hostage without the viewer knowing anything about them. The two main female characters, Nazanin Boniadi’s Zahra and Tilda Cobham-Hervey ‘s Sally are not only fleshed out, but are just as strong as the male characters.

Not knowing if her young son is alive or dead, Zahra is doing everything she can to stay alive. While Zahra is trapped in one section of the hotel, Sally is trapped in another section with Zahra and David’s infant son. Trying to stay alive while keeping herself and a six-month-old safe is not easy, but Sally does everything she can to protect herself and her charge. They know that the moment by moment decisions that they are making could lead to their deaths. But that is a risk that both Zahra and Sally take to stay alive and keep the baby out of the view of the terrorists.

Hotel Mumbai Ultimately Does Not Deliver

Going by the trailer, Hotel Mumbai is part disaster film, part action film and part survival film. While each of these aspects play well together, they don’t blend as well as they should. During the film, I had yearnings to check my phone to see how much time had elapsed since the beginning of the film. I should have been so riveted by the movie that the thought of checking the time should have never crossed my mind until the credits rolled. But I did check my phone, which from my perspective, is not a good sign.

Hotel Mumbai lacks a certain deeper meaning that makes the entire project worthwhile. It’s unquestionably well-photographed and acted, but it’s merely a glorification of the Mumbai attacks viewed through a cinematic lens. I’m sure Anthony Maras will get other directing gigs based off of his work here, but the film is rarely more than a simple directing showcase.

To be honest, I was bored. I didn’t walk into the theater expecting to be bored, but I was. I should have been be glued to the screen, my heart beating a mile a minute. The question of who would live and who would die should have been bouncing around my head the moment that the terrorists entered the hotel. But the question came and went.  I wanted to like Hotel Mumbai, but unfortunately, I didn’t. In the end, there simply isn’t enough of an attachment to this recreation of a harrowing, true event.

Thank you for reading! What are your thoughts on Hotel Mumbai? Comment down below!

Great review! I found it exciting, actually, and I was surprised by your final judgment of the movie. I think I’ll skip this one, I wasn’t hyped for this and I certainly don’t want to watch a boring movie…