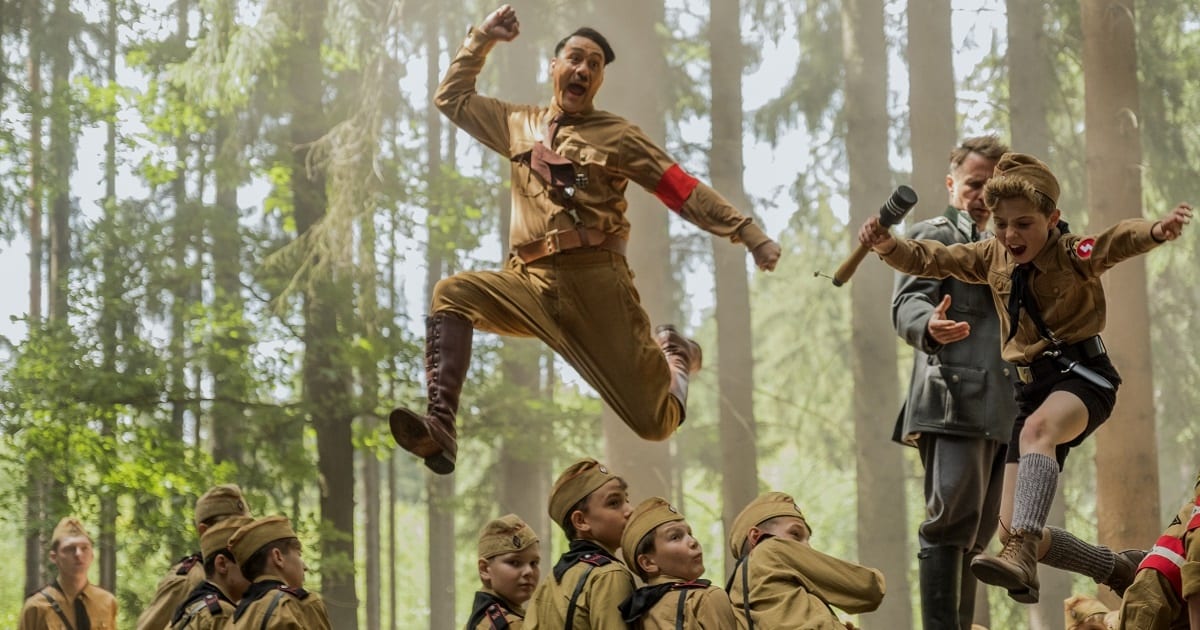 So far in his career, Taika Waititi has essentially told two kinds of stories: ones that are nothing but unabashedly goofy chaos (think What We Do in the Shadows or Thor: Ragnarok) or a coming-of-age tale that is about father figures in some form…and is also filled with goofy chaos. Jojo Rabbit is definitely the latter, centering around the young Roman Griffin Davis as the titular Jojo (the current belt holder for the cutest kid in a movie) who wishes nothing more than to be a member of the Hitler Youth and become a Nazi. Jojo also has an imaginary friend, who just so happens to be Adolf Hitler played by Waititi himself.

Strangely, despite the guise of something completely out there for Waititi, Jojo Rabbit is just the next stage of his development as a filmmaker. A reflection of the kind of power that directing a highly successful Marvel movie can get you. The kind where you can finally direct your passion project that you’ve been developing for years and expand upon the themes that have been present in your previous works.

I immediately thought of movies in his filmography such as Boy and Hunt for the Wilderpeople. Each uses Waititi’s signature brand of goofy, light-hearted, and precious comedy to color a story about a kid looking for his true father figure, or trying to rationalize the lack of one. Jojo is dealing with those same issues as a lonely child whose father is off fighting in WWII. He holds out hope that his father will return to him and his mother (Scarlett Johansson), but you can sense that his optimism is quickly fading. You get the feeling that the lack of a father figure has forced him to grow up too quickly, to abandon a lot of what makes being a kid wonderful.

Naturally, Jojo subconsciously wants to follow in his dad’s footsteps, hoping to be as successful and powerful as what he props up his father to be in his mind. So, of course, he turns to blind fanaticism! He is a ten-year-old boy, after all. We see Jojo go to Taika Waititi’s version of a Hitler Youth camp, which includes all the animal killing, book burning, and dangerous training exercises you could imagine. But it’s also incredibly precious in only the way that Waititi knows how. Sam Rockwell’s Captain Klenzendorf (the 1045th character with some sort of racist quality that Rockwell has played), Rebel Wilson’s Fraulein Rahm, and Alfie Allen’s Finkel all set the stage for what Jojo Rabbit‘s version of Nazism is: never particularly menacing, always gullible, and strangely charming.

Jojo and his friend Yorki (played by Archie Yates who is so, so funny in his supporting scenes) couldn’t be more excited to join the fight for Germany, so much so that Jojo tells Yorki that he is, in fact, not his best friend, but his second-best friend. He quickly notes that the best friend distinction is always reserved for Hitler.

Which brings us to the elephant in the room: Taika Waititi as Hitler. Just about everything Waititi does in every one of his films makes me giggle. His particular way of bumbling around always manages to strike a chord with me. As Hitler, he’s almost exclusively used for comedic effect. He’s the latest in a long line of actors to play a comedic version of the twisted dictator, dating back to even during the war with Charlie Chaplin’s The Great Dictator. But what differentiates this performance from the many before is the imaginary friend aspect of it (obviously). Waititi’s version of Hitler is a man-child in a way that only a kid could conjure. When he says hateful things about Jewish people, it’s filtered through the same blindly fanatical lens as Jojo. Just like the ten-year-old who created him, Waititi’s Hitler is short-tempered, kiddish, and undeniably clueless about the world. The joke wears thin after some time, but it’s a thoughtful way to express a child’s lack of understanding nevertheless.

But Jojo flips when he learns that his mother is hiding a Jew (Thomasin McKenzie) in their house and he must come to terms with his line of reasoning. As a person who lives in the greater Washington, D.C area and sees kids both ironically and unironically wearing MAGA gear without an understanding of the connotations of it, I found this representation of a kid accepting  and later dealing with his blind nationalism poignant, elevating it above the simple idea that Nazis and racism are “bad.” 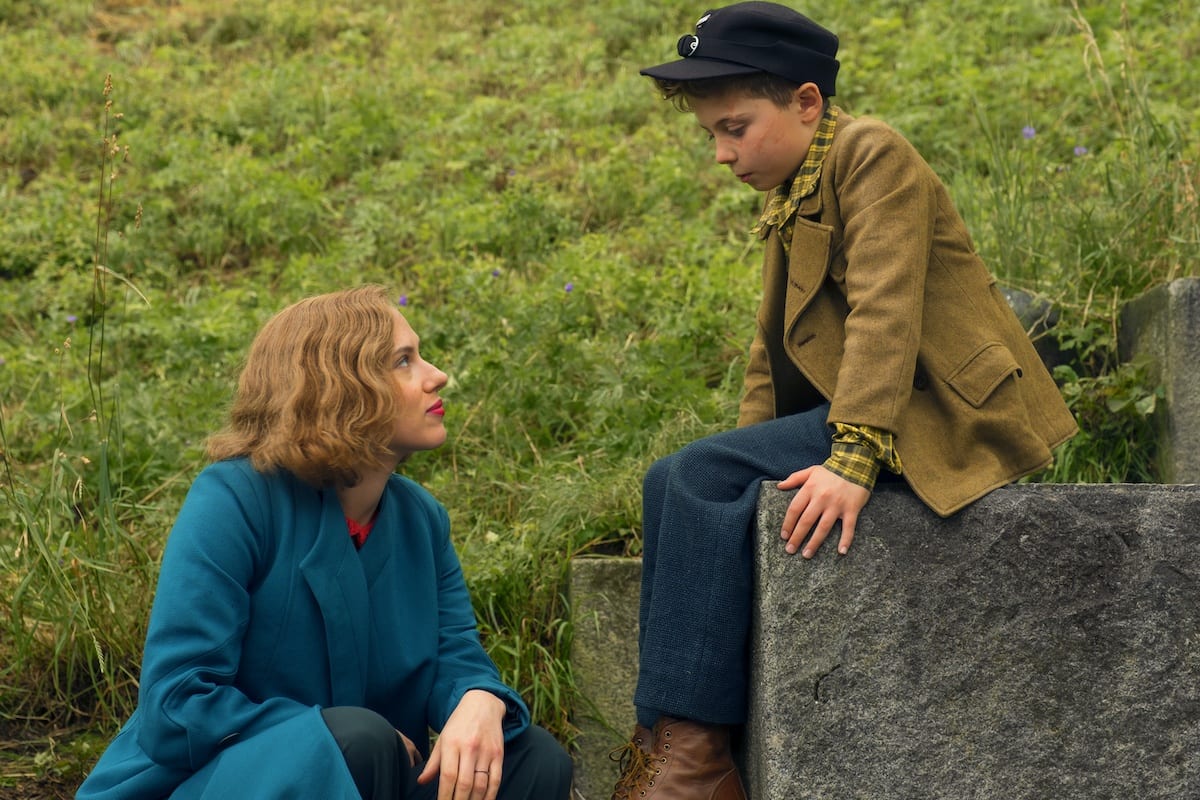 Jojo Rabbit is at its best when dealing with these dramatic elements and others like it. Like in his other films, Waititi’s oddball touch enhances these moments, making a simple scene such as Johansson and Davis arguing and later making up at the dinner table far more touching and honest. The characters bumble through scenes in a way that feels less actorly, almost like they’re making it up as they go along. (I wouldn’t put it past Waititi to allow his very talented cast to go off-script and find something personal on the spot.) Before I had seen Marriage Story — we’ll get to how much Noah Baumbach’s divorce movie wrecked me in an upcoming piece — I would have called Johansson’s work in Jojo Rabbit as Jojo’s mother some of her best in years.

Johansson is having a blast sporting a fairly hammy German accent, but she also shows the kind of warmth and love that we’ve rarely seen recently. Johansson is solid as Black Widow and haunting as the alien from Under the Skin, but Jojo Rabbit allows for some of those deeply human touches that she can bring to a role.

I especially love what this proclivity does for Sam Rockwell’s character, who uses comedy and general buffoonery as a shield for a character who explicitly and implicitly has more going on than just being a disgruntled cast-off of the German army.

Jojo Rabbit is at its worst when it’s just a comedy. The delightfully terrible Nazi gag does get tired after a while. (The moment where it feels tired is immediately when Stephen Merchant comes into the picture.) It’s particularly out of place when layered on top of deeply personal moments and troubling imagery from WWII. Waititi tends to undercut dramatic moments with an ill-timed joke, which you see a lot as Jojo struggles with a few intensely devastating moments only to have Yorki step in for a silly one-liner or a group of Nazis pleasantly say “heil Hitler” nonstop. The drama doesn’t quite mix with Jojo waltzing through the streets in a goofy costume shouting “metal for Hitler!!!”, even if they work on their own as standalone scenes.

I wouldn’t call Jojo Rabbit “one-note”, but it doesn’t necessarily have many notes to it — the notes that would take it from “good” to “great.” Taika is always gonna do Taika, and when he’s not bringing his A+ material, his movies tend to feel more quaint than resonant given his very approachable and light sense of humor. Jojo Rabbit succumbs to this at times, especially later on. It shows the best and worst of Taika Waititi’s idiosyncratic touch as a creator. Luckily, Waititi is good enough at what he does to make the entire ride fairly smooth and show much more of his best than his worst.

Thank you for reading! What are your thoughts on Jojo Rabbit? Comment down below!

[…] they were hired to do, and then go home. If that is their prerogative, that is perfectly fine. But Chaplin did not fall into that category. He understood, as both an actor and a filmmaker, the power of the […]

[…] to Beth, even with all the crazy stuff she does. It shows the depth of his love for her and the softness in his hard facade. I just adore this […]

[…] for The Wolf House, it’s framed as a propaganda movie by the colony to debunk all the terrible rumors about it. (They’re doing a rather […]

[…] of difficulty was so high with that adaptation that it is well-deserved. It’s a thin line that Jojo Rabbit walks and I think he does so perfectly with some beautiful writing. Also, Taika is awesome and I […]

[…] and The Irishman, and I think it’s a strong possibility that The Academy goes here as well. Jojo Rabbit and The Two Popes haven’t gained a ton of traction in the awards race overall despite a few […]