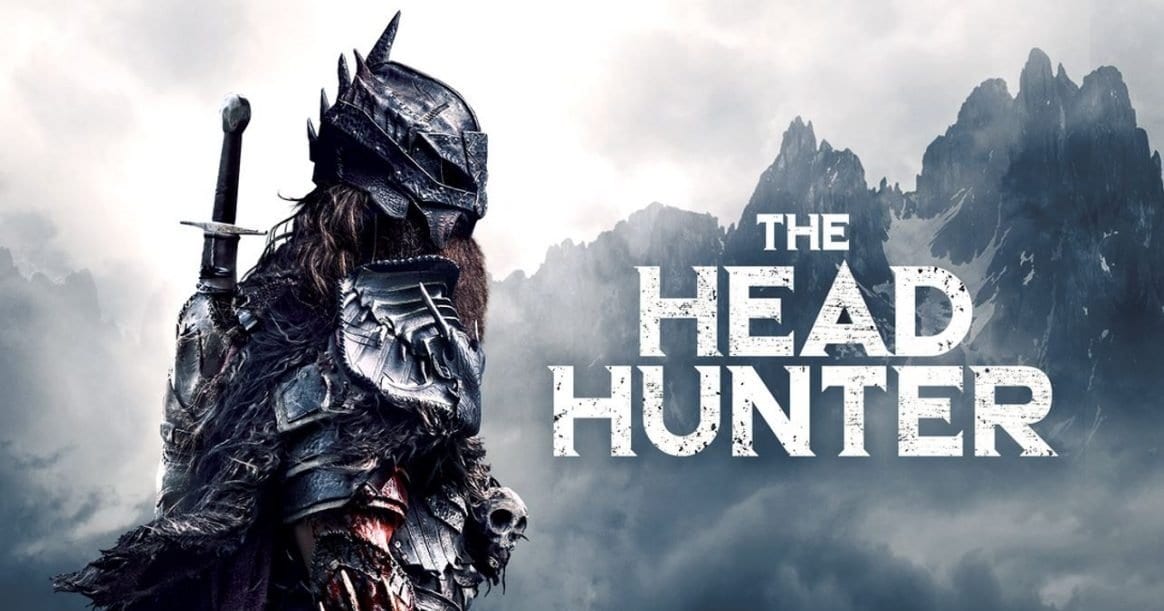 I still need to make amends for being one of the hundreds of millions of people that watched Adam Sandler’s cinematic obscenity, Murder Mystery, on Netflix. Therefore, I felt I was obligated to watch something small and low-budget, something that should receive more attention. A little horror movie called The Head Hunter garnered my attention for that very reason.

When I discovered it was directed by the guy who directed ThanksKilling, however, I started to get worried that I might have made a mistake.

Luckily for me, there was absolutely no need to think that way.

A medieval warrior referred to as Father (Christopher Rygh), guards a vast expanse of forest landscape from monstrous creatures.

The origins of his mission are never revealed. In the distance there’s a castle, a possible kingdom to which he swore an oath.

In his isolated existence, he spends his days preparing for the inevitable gory battle. Sometimes he gets wounded and thus he gives himself time to heal. On the walls of his cabin, there’s a grisly collection of heads on stakes, belonging to all the monsters he slays on a daily basis. He grieves for his daughter (Cora Kaufman) who despite his best efforts, perished in the hands of some ungodly creature.

Soon he receives word that the monster that had slain his daughter, has returned. The warrior can finally have his revenge — though at the same time, must confront his grief head-on in the process.

The Epitome of Minimalist When I finally sat down to watch The Head Hunter, I was a little taken aback by its slow pace and lack of action. This is not a film interested in cheap thrills, despite the subject matter. Don’t expect excessive gore as all the battle scenes with monsters are mostly off-screen. We see glimpses of these monsters prancing about the forest, but they are mostly covered by darkness.

The reason for this is the obviously low budget; the film was produced for a measly $30,000!

The Head Hunter, however, is more interested in establishing the mood and the character of the Father. Besides his grief for his mother, we never get a backstory. We must just accept that this is his mission, this is just something he must do, whether as some kind of warrior oath or some purgatorial plight.

We observe him in his solitude, talking to her grave, sharpening his stakes, tending to his wounds. There are hints of greater mythology, but it’s never fully explained.

Once you realize what kind of movie it is, it’s easy to get swept away with it, especially due to its beautiful cinematography. 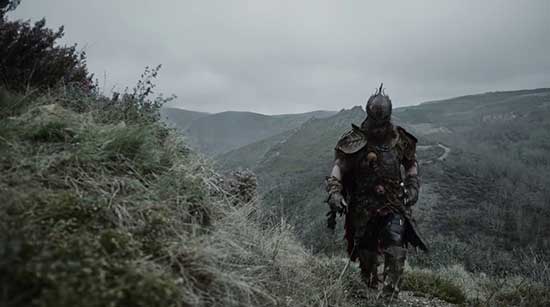 The landscape of Portugal and Norway are beautifully displayed by the visual talents of cinematographer (and co-screenwriter) Kevin Stewart. The use of natural light, sometimes in extreme darkness work wonders in creating tension — though we shouldn’t forget Nick Soole’s musical contribution. But it’s in the gloomy daylight scenes that we see some incredible scenery, reminiscent of a Terrence Malick film.

Such wilderness is a place of unbridled savagery and quite merciless against the weak. But if one survives the elements and manages to stand still, you will experience something close to Eden. If you’re the type that likes to hike in the woods, you will get something out of this film.

It’s obvious that The Head Hunter was a passion project for both Stewart and director Jordan Downey, and regardless of its flaws, it’s absolutely gorgeous to look at. 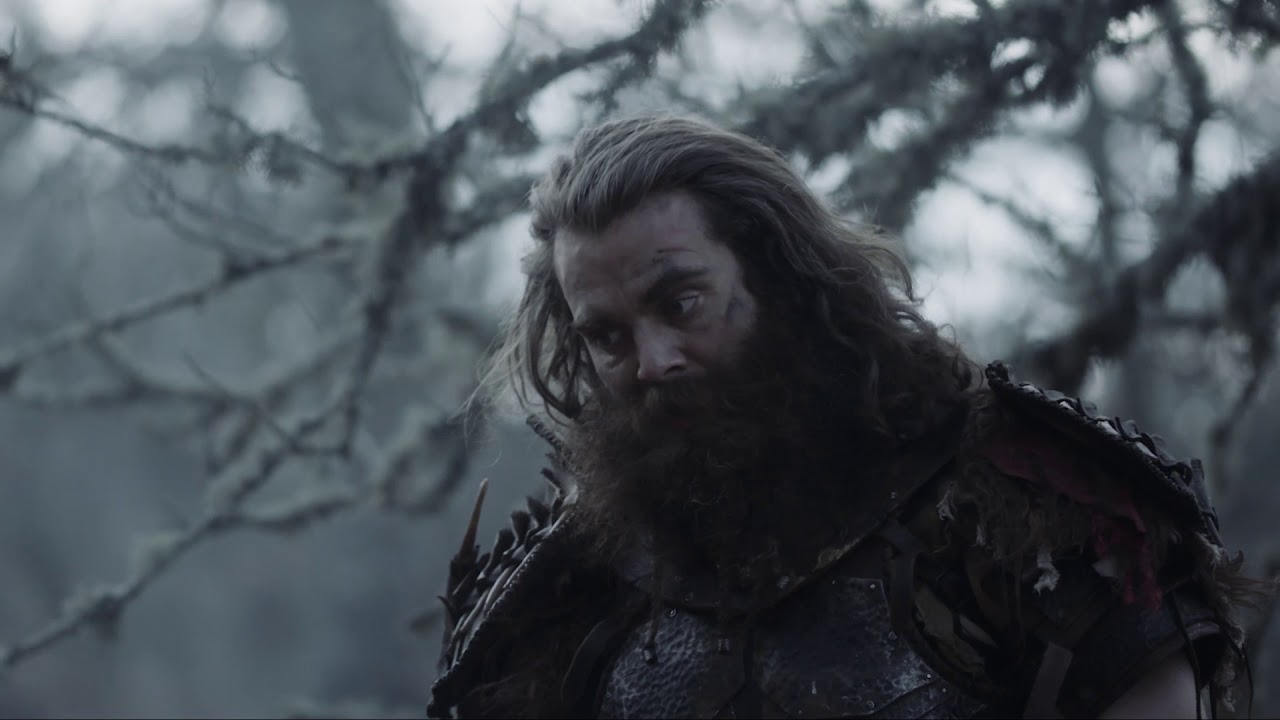 A film can be beautiful to look at but you need to have a great central performance too. It’s second great treasure is the main actor Christopher Rygh, who despite his extremely limited dialogue — don’t expect any souring monologues — gives a wonderfully layered performance.

There’s a tiredness and conviction to his performance, this is a man that accepted his painful fate and stands by it until the end. In his quiet moments, you see slivers of grief rising from his tough surface. He can’t dive too deep into his sorrows or else he’ll be susceptible to the gruesome monsters that evade his land every day.

Rygh is on screen nearly every moment, and despite the limited dialogue, his presence really makes his character captivating. 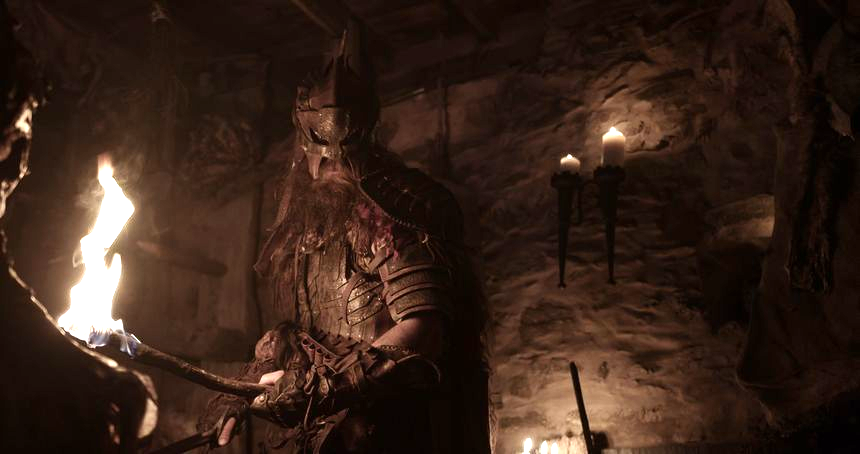 I absolutely respect the minimalist style of the film, but the slim story could have used something extra. It’s a short movie, barely reaching 80 minutes in runtime, but many viewers will still find it rather tedious. Admittedly, it could have used a few more plot elements to spice it up.

Perhaps more background about its fascinating world or more eccentricities to the main character — maybe one monologue wouldn’t have hurt — would have provided greater depth.

There’s a tense chase scene in the darkness that makes up for its lack of action, however. The confrontation with the monster is well-handled, despite the goofiness of the creature and the obvious low-budget of its presentation.

The final confrontation also has an important dramatic element that is moving yet, if there were had just been more scenes establishing their relationship — like an intimate flashback of him and his daughter for instance — we could have felt something more.

Most people will probably consider this film a slog. Gorehounds will certainly be disappointed in the lack of monster battles, which, admittedly, I wanted to see too. But if you’re into slow-burning, atmospheric horror films, you will undoubtedly appreciate this film.

Regardless of its flaws, it’s a wondrous technical achievement considering its extremely low-budget. And it actually starts to make me excited about what the director of ThanksKilling will have for us next…

Thank you for reading! What are your thoughts on The Head Hunter? Comment down below!

[…] a country with a population of only five million people, Norway punches above its weight in the world of scary movies. Maybe it’s the unfathomable depths of […]

‘The Invisible Man’ is the True Start of...