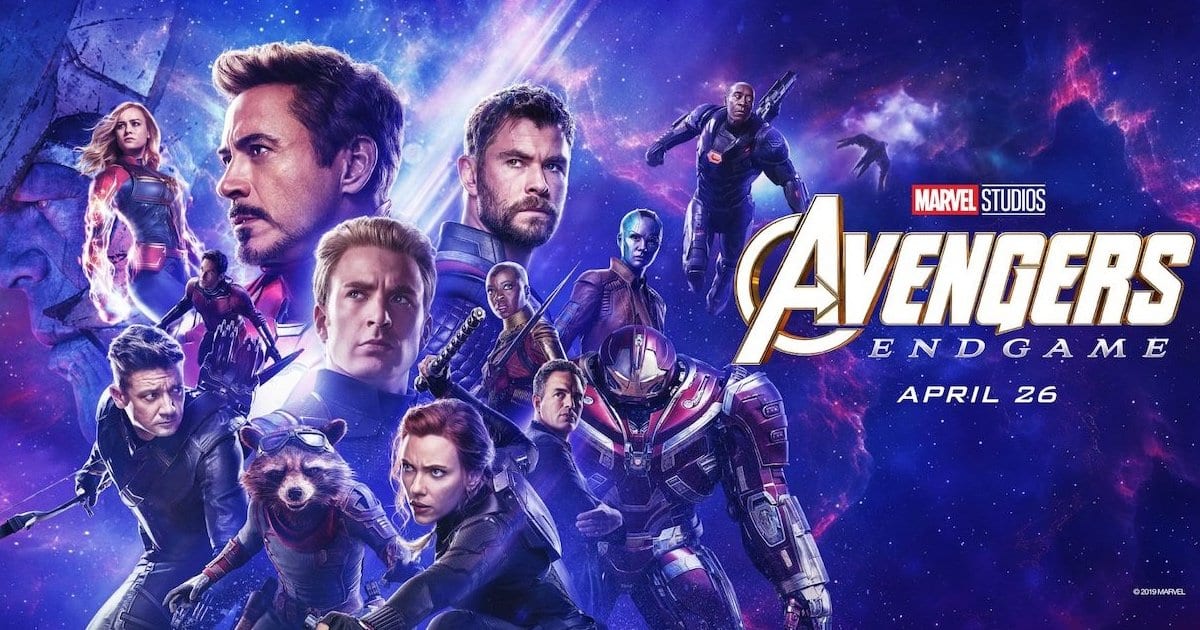 Seeing Tony Stark make a suit out of metal scraps seems like a long time ago, doesn’t it? Since 2008, our supreme overlords at Disney — with a little help from Paramount in the beginning — have bestowed 22 interconnected films upon us. Some have been pretty great, others…not so much. But no matter what comes next, Avengers: Endgame is certainly a grand culmination, one that is largely unparalleled. Even Infinity War feels small by comparison.

Regardless of this review — or my inner cynic that wishes to do nothing but watch movies like Diane for the rest of my time on this Earth —  it feels rewarding to be a part of such a massive cultural event.

The following review will be spoiler free. (Don’t worry, I really mean it!)

Directed By: Anthony and Joe Russo

In the wake of Thanos’ snap, the surviving members of the Avengers and the rest of the world are in a state of complete disrepair. Individuals cope with the loss of their loved ones, and all seems broken in the rubble that the Mad Titan left behind.

But with a bit of luck, the Avengers devise a plan that may bring everyone and everything back.

(Jeez, writing a synopsis is tough when you’re trying to keep everything as vague as possible.)

Whether you like it or not, the MCU has fundamentally changed blockbuster filmmaking for good. Think about it: the most ambitious superhero flick before the start of the MCU was probably X2 in 2003, that is if your main signifier of ambition is the amount of central characters in the film. X2, like so many other superhero movies from the early aughts, seems unbelievably quaint and tame by today’s standards. Clearly, Kevin Feige and Co. opened up Pandora’s Box. There’s no going back; The Avengers are the gold standard for scope and pure epicness.

I honestly have no idea where we go from here. Do superhero movies become more experimental? Do they follow the path of Westerns from decades ago with each film becoming a revisionist superhero movie? Do they become bigger-er? Like Doctor Strange seeing the 14,000,605 possible scenarios before the climax of Infinity War, there’s only one true path in the end. But we probably never expected that one, ultimate destiny to have such limitless possibilities.

Endgame is truly the end of a lot of things, but it may not be that crazy to say we’re just getting started. Who knows, maybe a 2030 superhero movie makes Endgame look like a cute, little indie.

Throw Everything at the Wall and See What Sticks

Even more so than Infinity War, Avengers: Endgame is the cinematic equivalent of dumping one’s entire chest of action figures onto the floor and smashing them all together, in both a good and a bad way. The bad is that the film has the tendency to feel overstuffed, but the good amounts to the most “holy shit” moments in a blockbuster that I can ever recall. Seriously, there are a few moments in this film that may cause a few overeager fans to soil themselves from excitement.

It’s movies like Avengers: Endgame that make me appreciate going to the movies in 2019. There is literally no experience like it: seeing a movie of unparalleled scope on a massive screen in a crowded theater is the communal experience we hardly get anymore, and it’s one that I will always welcome with open arms. I’m sure many would love that this feeling bleed over into other, different films (me included), but there’s simply no questioning the type of impact that Endgame has.

It’s such a cliché to rebrand a film as “an event” nowadays — much like how trite it is to joke about having to pee during Endgame — but the 22nd MCU movie deserves this designation. It’s the biggest, baddest, and most insane event of them all.

The Russo Brothers have deserved a nice break after filming Infinity War and Endgame back to back. It hurts my brain to think of all the logistics that must have gone into creating this 3-hour behemoth. The fact that this movie works at all is a marvel (pun intended).

The limitations of writing a review bereft of spoilers is clear in the case of Avengers: Endgame. Much like what many fans are seeing with the parallel culmination of Game of Thrones, one must dive deep into the plot points and crucial moments of the product to truly drive home their perspective to those that wish to hear or read it. But I can say this: Endgame is unquestionably satisfying. That’s the term you’ll hear most in conjunction with this movie. After almost eleven years of building, it would take something absolutely monumental to bring it all home and satiate Marvel diehards; it’s as epic as you would have hoped.

Not only are there no post-credits scenes for the first time in the history of the MCU, there is a true sense of finality to the events shown. Obviously, there will be more. Disney and Marvel Studios will make superheroes movies until the Sun engulfs this planet (on that day we will surely need the Infinity Stones to fix any calamity), rendering any talk of Endgame being the last of its kind fairly pointless. But careers of our most beloved actors and creatives evolve, and so too must our most beloved properties. Surely, the MCU will never be the same again.

I’ve grown to thoroughly enjoy Infinity War since its release approximately a year ago. It wasn’t until a bit after I completed my initial review of the film that I fully bought in to one excruciatingly important idea: these event films are unlike anything else in the marketplace.  Endgame falls more so into this line of thinking. Expecting a tight, three-act structure or air-tight logic from a movie that has this much to it is silly, quite frankly.

Having said this, you should still expect a certain narrative flow and maximum emotion from each scene. Avengers: Endgame struggles with idea at times. Sometimes, it’s almost unbearable. Tones can shift wildly from vignette to vignette, eliciting far more confusion than empathy or tears.

The first ten minutes are damn near flawless, packing all the emotion and weight you would expect from a movie of this magnitude with the fallout from the last film being that literally half of humanity floated off like sand in a gentle breeze. (These great actors actually get the chance to act for a change!) Then Endgame quickly devolves into something out of a bad SNL skit for long stretches, ruining any emotion that could be taken from a moment with that patented, increasingly frustrating sense of humor that all these films must has even when a scene does not call for it. At all.

Combined with fan service overload at times, many scenes are essentially worthless in the grand scheme of it all. Some are even sloppily composed, which further hampers the final product.

Avengers: Endgame is the perfect chapter skip movie. When it hits its highs, it reaches up and touches the stratosphere. And when it falters, I struggle to find any added benefit to the overall story.

I think one of my tweets just about sums up everything you need to know about Avengers: Endgame:

Endgame is wall-to-wall fan service for three hours, which will be a perfect finish to this stage of the MCU for literally millions of moviegoers. While watching some of Endgame‘s more fan-service-centric moments that find a way to stick the landing, it was impossible not to feel an effervescent sense of giddiness.

There are extended sequences that simply don’t work for me, but I know that Marvel fans are going to lose their goddamn minds over just about everything in this movie. I can’t wait to be a part of the conversation.

Ultimately, this is a satisfying experience, and one of the most impressive balancing acts in movie history.

Thanks for reading!  What are your thoughts on the Avengers: Endgame?  Comment down below!

[…] stunt coordinator, having worked on some of the biggest blockbusters of recent years including Avengers: Endgame, Avengers: Infinity War, and Captain America: Civil War, to name a few. Although I’m not a […]

Great review! Like you, there were some elements to the film that could’ve been better but overall it was a satisfying conclusion to an amazing saga.

I’m also proud to announce I’ve nominated you for the Sunshine Blogger Award. You can see the details here: https://annlyelonline.wordpress.com/2019/05/14/ive-been-nominated-for-the-sunshine-blogger-award/

Thank you so much for the honor!!! Really appreciate it 😁

Really good review! While I disagree with you about the balance of comedy and drama, I do agree with you that Avengers: Endgame was a satisfying conclusion to this particular chapter. I also wrote a spoiler-free review of the film, with a spoiler review coming on my blog this weekend! Here’s the link if you want to check it out:

Great review! It would mean a lot if you checked out my review as well:
https://letstalkcinema.movie.blog/2019/04/29/avengers-endgame-movie-review/

Wow, what an emotional ride! While this succeeds in delivering a few capstones to certain characters, it does leave the door of uncertainty open in at least one aspect that I won’t mention here since that deserves a future article by you or one of your staffmates, Nicky Boy! I too found some of the humor to be unnecessary in certain spots, while other jokes were a delight. Since you and the rest of your crew can delve into more spoiler-filled topics as the months go by, I’ll leave you with the fact that this was very entertaining and worthy of being watched. Also, the only “spoilers” I’ll give are: 1. Expect the catchphrase & 2. Expect a few heroic sacrifices.

Thanks so much! I’m seeing it tomorrow, so I’ll be super excited to weigh in when the time comes. :)

Awesome! I hope you have a great time!!!!

Good review. Personally, I loved this movie. To me, it was best MCU movie to date. It had everything….heart, humor, drama, spectacle, and entertainment. Definitely gonna be an end of a era.

I’m glad it had such an effect! Considering how ridiculous the box office numbers are at the moment, you’re definitely not alone 😁

Great review. Great job with keeping the spoilers to a minimum.

Thank you for writing this:)

Top 10 Sequels that are Better than the...