‘Ben-Hur’ and the Legacy of Cinematic Epics 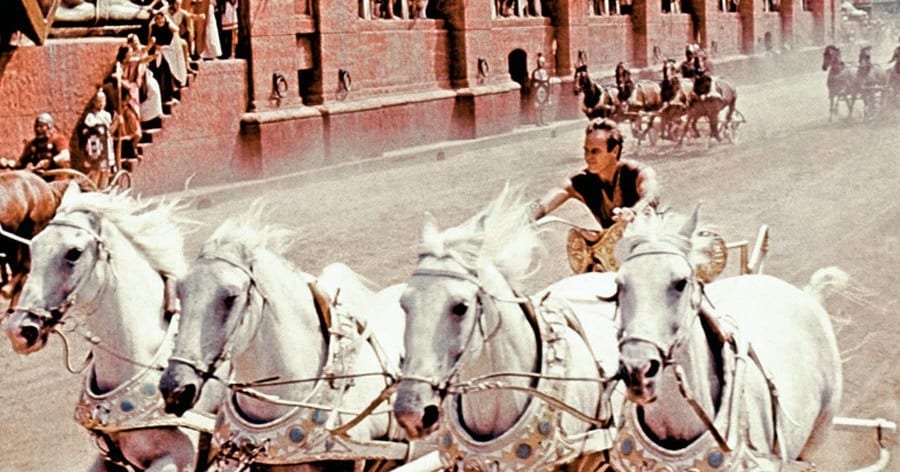 Ben-Hur hails from a cinematic era as obscure and seemingly obsolete to us today as the ancient Romans have been to us for centuries. Released in 1959, Ben-Hur came at a time during which many of the big-time films Hollywood strove to craft were nothing less than epics.

The Grand Scale of Classic Cinema

The sheer vision, the scale, and the depth of character portrayed in this film have seldom been outdone in the six decades which have followed. It is a truly moving masterwork of film, a prime example of the many marvels cinematographers were capable of achieving long before CGI came into the picture. Other epics from this era would come to include Lawrence of Arabia (1962), Doctor Dolittle (1967), and 2001: A Space Odyssey (1968).

Whether you were riding a camel over the sands of the Middle East or gliding weightlessly through the void of space, moviegoers were exposed to very raw representations of grand stories. Everything about these movies was big: the actors, the sets, the scenes, everything. The sweeping wide-angle shots are not only iconic of Ben-Hur and countless Westerns, but they were a signature style in many of the biblically-inspired cinematic stories of this time.

The wide-angle grandeur in the frame encapsulates a daunting, humbling, and divine sense of place, showcasing humanity’s minuteness in face of Nature’s great expanse. However, this sense of grandeur can certainly be overused, often having detrimental effects on the overall aesthetics of a film. For instance, The Greatest Story Ever Told (1965) — which assembled a splendid cast — departed from its proximity with the characters far too often. In it, close-up shots are sparse while the wide-angle scenes, though beautiful, are far more plentiful and cause a sort of detached, distant association with the characters. It’s a movie with fabulous on-screen talent and a good intention; it would also be considered one of those epics of its era. However, it falls flat due to the difficulty the viewer has in connecting with the characters.

Ben-Hur, which preceded The Greatest Story Ever Told by several years, is quite different in this regard. It certainly shows off wide-angle shots of grandeur and might, but it also has a more balanced mixture of close-ups, these scenes which serve as moments of intimacy and understanding. Ultimately, Ben-Hur displays a superiority of cinematography even among the epics of its day.

Reminiscing of the Epics

There are other reasons why the dramatic films of this era were epic. One such aspect is the runtime. In the big Charlton Heston pictures such as Ben-Hur (in which he plays the title character) and The Ten Commandments (in which he plays Moses), the runtime dwarfs that of Avengers: Endgame by at least half an hour. Not to mention The Fall of the Roman Empire, which is just shy of four hours long.

On account of their length, the epics often included intermissions, an underused piece of the moviegoing experience these days.

Ben-Hur was part of a sort of fad during this era of cinema. Namely, it was a trend in which Hollywood was weaving stories around various events from the New and Old Testament of the Bible. In addition to the other religious-oriented film epics mentioned earlier, Quo Vadis (1951), The Robe (1953), The Story of Ruth (1960), and The Fall of the Roman Empire (1964) all fall into this single category.

Hollywood was particularly interested in doing films set in the ancient Roman Empire which often touched on topics such as the persecution of the early Christians. In the case of The Fall of the Roman Empire, Stephen Boyd, who played the ruthless Roman soldier Messala in Ben-Hur, was cast as a Roman soldier yet again. Only this time he played a more honorable, benevolent man.

In 1960, Boyd won a Golden Globe for Best Supporting Actor for his portrayal of Messala in Ben-Hur. As for the rest of the acting in the film, what can I say that hasn’t been uttered already? Charlton Heston always delivered a stern yet depth-filled and natural personality to all of the characters he picked up over his decade-long career. Haya Harareet, who plays Judah Ben-Hur’s love interest Esther, gives a passionate and moving performance. Frank Thring does a stereotypical snobbish representation of Pontius Pilate. And Finlay Currie, who played Peter the Apostle in Quo Vadis, shows up as Balthasar, a kindly old man who has sought the Christ for much of his life and who acts as comrade to Judah for a time.

Ben-Hur gives even the modern viewer a sense of authenticity cutting deep into the viewer’s emotional senses. This power emanates from the actors and actresses and the layout of the scenes. When Judah is shown mercy by the Nazarean, whose face is never revealed to the film audience, all one has to do is look at the expression on Heston’s face. It is then you know that the man who gave him water is no ordinary man. Watch the crucifixion scene, and you get this fantastic low-key sequence with reflections in a gathering puddle of rainwater.

Because it was made in a pre-CGI era, this rendition of Ben-Hur obviously employed live horses. Likewise, many of the sets that were constructed were made to fit the largescale proportions that this epic called for. If we now look to the 2016 reboot of Ben-Hur, it is painfully easy to find fault with the acting and the mediocre CGI. This newer film exemplifies the state of modern filmmaking: that half the time we can’t even get a live horse in frame. CGI makes everything so simple, and that isn’t always good.

The 2016 Ben-Hur still displays some intriguing cinematography and solid acting from folks like Morgan Freeman and Toby Kebbell. Yet, the keenness of the acting is always there, and the scenery relies too heavily on CGI. Many of the natural aesthetics of this reboot pale in comparison to a cast led by Charlton Heston in a film that had to be as raw and as big as it possibly could.

When it comes right down to it, the Ben-Hur of the late 1950s is a terrific movie in its plot’s entirety and its artistic aspects. It is a story of revenge and romance, mercy and miracles, sickness and salvation. Despite neverending adversities, Judah Ben-Hur perseveres in the hope that someday he can undo all the pain which Messala and Rome have brought him. The film remains a classic as well as a monumental work from a host of cinematic marksmen that hit the aesthetic nail right on the head.

Thanks for reading!  What are your thoughts on Ben-Hur?  Comment down below!

I loved Ben Hur for the horses and the depiction of Christ. Never bothered to see the reboot. The trailers were pathetic in comparison to the 1959 version.

‘The Man Who Shot Liberty Valance’ Is a...

A Great Becoming: ‘In the Mouth of Madness‘...