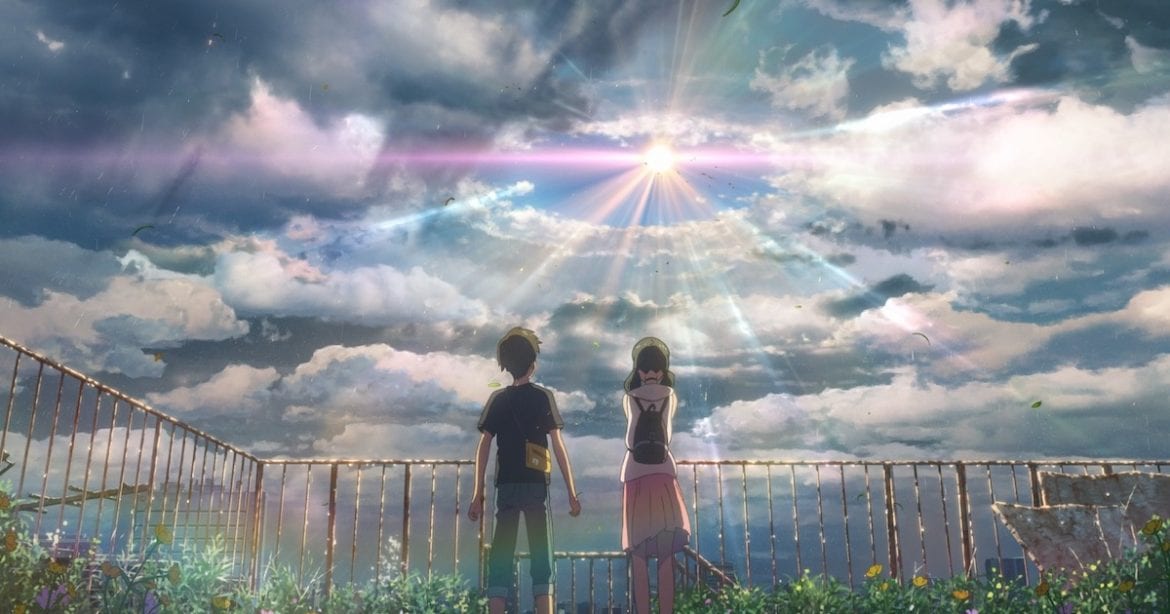 3 years ago, in 2016, Makoto Shinkai’s Your Name shook both the Japanese box office and the U.S. box office. The film was universally lauded and broke Japanese box office records. Seriously, if you have not seen Your Name yet, please do. It is an amazing film that is emotional, hilarious, breathtaking, and probably the best body-swap film ever made. So, with Weathering with You, Shinkai’s latest animated film, the film is bound to be compared to its popular predecessor. Thankfully, Shinkai delivers another beautiful and impactful installment that is a worthy successor to Your Name.

Weathering with You focuses on the story of a young boy named Hodaka who has escaped his small hometown for the bright city light of Tokyo. Unfortunately, for Hodaka, he cannot find work, food, or shelter. And to make matters worse, Tokyo is experiencing a relentless rainstorm that is flooding the city. Hodaka eventually befriends a young girl named Hina. Hina possesses the ability to manipulate the weather and stop the incessant rain for brief periods.

Soon, the two go on an adventure of spreading literal sunshine and happiness to the residents of Tokyo. Hina’s younger brother accompanies them; Nagi, as well as, Keisuke; a writer seeking to gain custody of his daughter, and Natsumi; an ambitious college student searching for her calling in life. But the sunshine does not last, and soon fate and prophecy begin to haunt the bond of Hina and Hodaka. In typical, Shinkai fashion, everything has its price, and everything happens for a reason. Hina’s weather gift is no different.

The Film’s Approach of Climate Catastrophe

While I enjoyed the film overall, I think it falters the most in its undercooked message. The film instigates a discussion for climate change of apocalyptic proportions but teeters on the edge of actually providing an actual message. Endless rain is no stranger to the science-fiction world. The Blade Runner films and Ray Bradbury’s short story “All Summer in a Day” utilize rain to symbolize a deeper meaning of oppression.

In Weathering with You, “Love conquers all” is an everlasting albeit recycled theme, but when put against the backdrop of a crisis that is so poignant and realistic like climate change, it ultimately feels like a letdown when not expanded upon more. The climate catastrophe in the film is less of a central allegory and more of a backdrop. Yes, the film is science-fiction/fantasy, so that excuses the film’s shyness from tackling more mature themes. This criticism is small when compared to the story aspects the film succeeds in, especially its well-written characters and story arc.

Shinkai’s visual and narrative style of juxtaposing modern technology and society with tradition and culture is once again a major player in his films. In Your Name, technology was the communication that could transcend time and space. Yet, rituals and traditions have not disappeared, in fact, they are extremely influential within the events of the narrative. With Weathering with You, technology is impartial to the efforts of Hodaka. He asks the internet for answers and receives nothing. He asks the internet for a job and is denied. Hodaka’s saving grace is Hina, who is blessed with the grace of parting the clouds with a prayer. With all the technology in the world, it could not stop or even understand the rain phenomenon in Tokyo.

It cannot be stressed enough how beautiful the animation is in this film. There are some shots that are some of the best I have ever seen in animation. If you have the chance to watch this film on the big screen, please do. You will not regret it.

The bustling lights that Tokyo is known for are replaced with the gloom and doom of its parasitic rain clouds. These depressing rain clouds visually dampen the screen for most of the film. But when the rain disappears and the sun escapes through the clouds, suddenly the world becomes a bright colorful painting. This film really makes you appreciate the sunshine, something that can easily be taken for granted.

Should You Watch The Film?

Anyone who is a fan of animated films, Anime, romance, or just good films, in general, should definitely give Weathering with You a try. And if you have not seen Shinkai’s other films, especially Your Name, please do. They are all worth a watch, even just for the visuals and soundtrack.

Ultimately, when compared to Your Name, Weathering with You falls a little short. But then again, that film set a high bar that may never be topped again. Fans of Shinkai’s work will surely enjoy this film and Shinkai rewards viewers with pleasant surprises and Easter eggs from his previous films. The weather might be grim and gloomy, but the film’s infectious charm and its characters are anything but. Weathering with You, with its lush visuals and exemplary acting, is an absolute delight to watch.

Thank you for reading! What are your thoughts on Weathering With You? Comment down below!