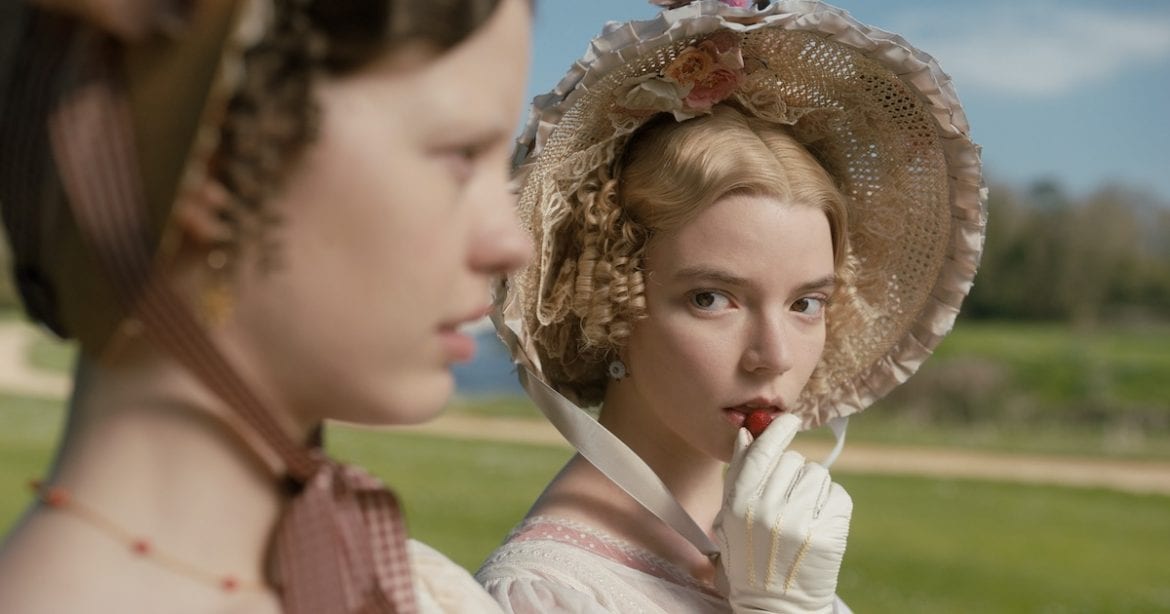 It is a truth universally acknowledged…wait, wrong one. “Emma Woodhouse, handsome, clever, and rich, with a comfortable home and happy disposition, seemed to unite some of the best blessings of existence; and had lived nearly twenty-one years in the world with very little to distress or vex her.” For those who had an English teacher that preferred Bronte, Emma follows Emma Woodhouse, a rich socialite in the fictional country village of Highbury, as she greatly overestimates her matchmaking abilities, and wreaks havoc in her attempt to make suitable matches for herself and others.

Another of my favorite adaptations of this story that might be more familiar is Amy Heckerling’s Clueless from 1995. Cher is Emma! Fun, right? Director Autumn de Wilde and screenwriter Eleanor Catton’s newest adaptation of the beloved Jane Austen novel, Emma., continues the long-held tradition of gorgeous film versions of Austen’s works. This adaptation, like Emma Woodhouse’s first 21 years, is neither distressing nor vexing, and feels like a warm cup of tea if you could watch what happens as the tea infused into the hot water. It’s measured and calm, while also being profound and tense. The acting, the direction, the writing, the set, the costumes, the score, all come together to create one of the most delightful and moving films I have seen, on par with Gerwig’s Little Women.

The only word I really can use to properly describe this film is one that is used to describe Emma herself — perfection. And yes, all my headings will be quotes from Emma, either the book or the film. Sue me!

“I always deserve the best treatment because I never put up with any other.”

Catton’s script and de Wilde’s direction complement one another perfectly in this film. Catton’s dialogue stays true to Austen’s original work, while still being relevant to those of you in the world who aren’t as obsessed with the Queen of Regency as I am. (A side note — I was basically destined to like this film at a base level the same way a comic fan would love any Marvel film, but I would also like to say that I am critical of Austen adaptations! I have a tattoo dedicated to the woman herself, I feel it’s my duty to honor her legacy. Okay, back to my review.)

de Wilde, before Emma., was primarily noted for her work in directing music videos for the likes of Rilo Kiley, Beck, and Jenny Lewis. It’s easy to see how this work in music videos translates to Emma. It’s dramatic without being overwrought, it has a subtle sexuality to it, and the blocking and physical acting are maneuvered as a choreographed dance might be. Combining the two stylistic choices of Catton and de Wilde respectively makes for a really gorgeous symphony of misunderstanding that characterizes all the great Austen novels.

“One half of the world cannot understand the pleasures of the other.”

If you read my review of The Assistant, which I have now given you a direct link to, I talk about my love for Joe Wright’s 2005 adaptation of Pride & Prejudice, the one with Keira Knightley and Matthew Macfayden. I found that watching Emma. was the equal and opposite reaction to the gritty style of Pride & Prejudice, which I think explains my adoration for both. Where Pride & Prejudice is dirty, wet, and has Keira Knightley covered in a slight sheen of sweat as Lizzy runs to Netherfield to see to a sick Jane, Emma. has the titular character in pastel dresses with delicately laid curls, drinking tea with pastries to match. The only tells of bodily functions happen in the third act, when Harriet and Emma cry and Emma gets a poorly-timed nosebleed.

The stylization can, of course, be drawn to de Wilde’s direction, but credit is due to both Kave Quinn and Stella Fox, the production designer and set decorator, for bringing this pastel countryside to life. Both, recently, have notably worked on Judy, Renee Zellwegger’s recent Oscar vehicle. The costume designer, Alexandra Byrne, I give a lot of praise too as well. These costumes are gorgeous, and manage to create an air of stifling sophistication, while also showing a sort of ridiculous and primal need for attention among these characters. Her expertise makes sense, given she has worked on Murder on the Orient Express, Mary Queen of Scots, and a slew of the Marvel films, including Thor and Guardians of the Galaxy. Talent!

“This sweetest and best of all creatures, faultless in spite of all her faults.”

Anya Taylor-Joy, the centerpiece of the film, absolutely delivers. She is, of course, gorgeous, and embodies the privileged air of Emma while also showing her humanity and why people really adore her. Yes, she is a little snobby, but you can also understand why. She doesn’t have Harriet reject Mr. Martin (if this is a spoiler alert, I am sorry) because she doesn’t like him, rather she has Harriet reject Mr. Martin because she believes Harriet can do better.

I know to some this may not seem like a huge difference, but to me, it shows that Emma, at her core, deeply cares about the people around her and wants them to be happy and comfortable. She is simply misguided in her first few attempts. The supporting cast she has, including Bill Nighy as the hypochondriac Mr. Woodhouse, Johnny Flynn as a rugged and sexy Mr. Knightley, Mia Goth as the naive and sweet Harriet Smith, and Josh O’Connor as the unbearably smug Mr. Elton, are all gorgeous and deep characters for Taylor-Joy to reflect her ethereal glow off of. The chemistry between Taylor-Joy and Flynn is palpable, and when it finally pays off, oh my god does it pay off. 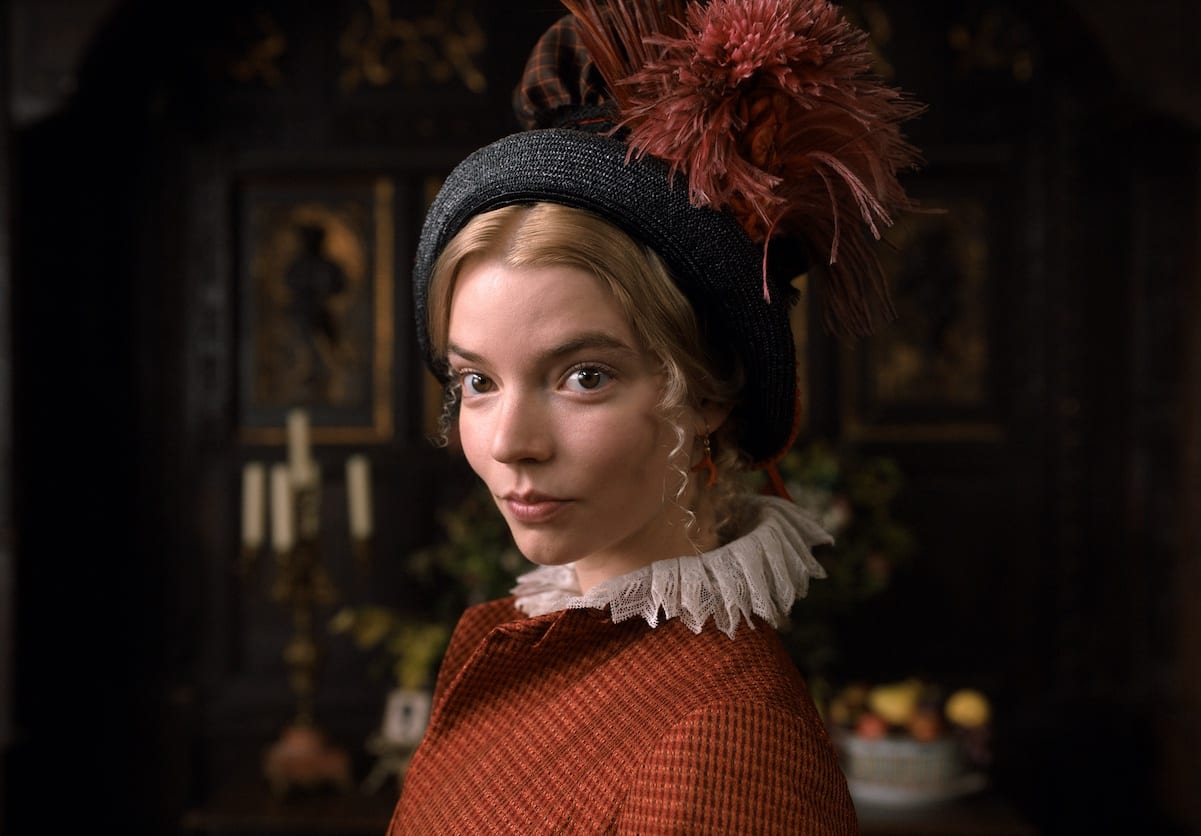 “Without music, life would be a blank to me.”

The score is the final piece in the puzzle of this piece of art that deserves undivided attention. Isobel Waller-Bridge (yes, Phoebe’s sister!) and David Schweitzer are both prolific composers, with the credits of Fleabag, The Crown, Vita & Virginia, and even Bob the Builder between the two of them. This score is beautiful, and helps to evoke the playful, yet tense, mood the film really walks the line between. The score is also specific, to me having a similarly direct influence of John Williams’ music in Star Wars. It has that same level of niche and specificity that guides the story and mood, while not compromising on gorgeous compositions. Both Waller-Bridge and Schweitzer have a long life ahead of them in film and television scoring, and truthfully I can’t wait to hear more of it.

“Why not seize the pleasure at once? — How often is happiness destroyed by preparation, foolish preparation!”

Mr. Knightley, in his proposal to Emma, has one of the greatest lines ever written or spoken of all time: “If I loved you less, I might be able to talk about it more.” That’s how I feel about this film. Sometimes, a piece of art makes you feel so comfortable, so at peace, so overjoyed to be experiencing it, that it cannot be accurately described to someone who doesn’t understand. I don’t want to conflate comfort with easy, however, or fluffy. This film is neither of those things. We need difficult films that explore hard subjects and make us look at things differently, and I love those films. However, sometimes it’s nice to watch a true love story unfold in a unique, tense, and reserved way, without worrying what’s in the basement. I will go watch Emma. again, and I encourage everyone to do the same.

Thank you for reading! What dare your thoughts on Emma? Comment below!

[…] category was perhaps the toughest to narrow down; Emma., I’m No Longer Here, Black is King, and Promising Young Woman didn’t even get […]

[…] about Sense and Sensibility. I wish they would both get the recognition they deserve for being beautiful period pieces that bring warmth and joy to their […]