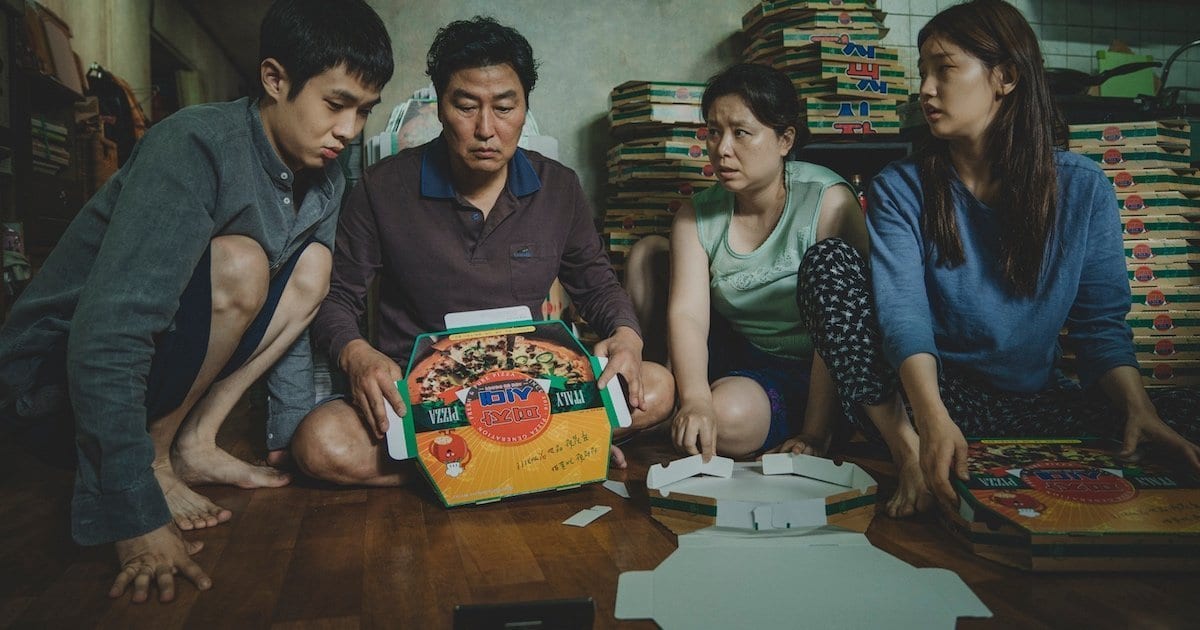 If there is any nation on this earth that is truly overdue for awards attention due to their amazing output of quality cinema, it is South Korea. Shockingly, South Korea has never had a film nominated in the Best International Feature Film category (formerly Best Foreign Language Feature) since its first submission almost 60 years ago.

That could all be about to change with Bong Joon-ho’s universally acclaimed, Palme d’Or winning opus, Parasite.

Meet the Kims. Father Ki-taek (Kang-ho), mother Chung-sook (Hye-jin), daughter Ki-jung (So-dam) and son Ki-woo (Woo-sik) are all doing it tough, struggling with unemployment. They live in a semi-underground, stinkbug-infested, Wi-Fi-absent household where drunks urinate in front of their window during meal times.

The Kims make ends meet by folding pizza boxes for a local pizzeria, until one day, hope comes in a mysterious and strange fashion. A family friend presents an opportunity for Ki-woo to be an English tutor to the teenage daughter of a ridiculously affluent and wealthy family, the Parks.

Go in Knowing as Little as Possible

Yeah, it’s a cliché and audiences are beginning to develop this attitude in the age of spoiler culture, but Parasite is a film that benefits greatly from knowing as few details as possible. Now that is a double-edged sword when writing a review, as you cannot explain or breakdown a number of aspects that make the film so good as it would give away key plot points, hence the vague synopsis above. Even Bong Joon-ho himself has called for a moratorium on spoilers for the film, which he did with this very classy and respectful video message.

Bong’s filmography is one that transcends beyond borders and well beyond genre, to the point where his work is widely considered to be a genre unto itself. Whether it’s gritty sci-fi action with Snowpiercer, a crime thriller with Memories of Murder or giant monster movie with The Host, Bong’s films are so unmistakably distinct and unique, as if they could not have been made by anyone else. No film in Bong’s body of work is more emblematic of this than the gloriously bizarre amalgam of genres that is Parasite.

Part satirical black comedy, part family drama, part wacky heist film, and even part horror film, Parasite carries off these radical shifts in genre and tone with ease and seamlessness, creating a truly original film that could have only been done by the filmmaking genius of Bong Joon-ho.

And The Oscar For Best Original Screenplay Goes To…

Okay, I know it’s a long shot, but I can dream!

For the insane juggling act of wildly contrasting tones and genres Parasite switches between, the screenplay has to be absolutely perfect. Luckily, Bong Joon-ho and co-writer, Han Jin-won never miss a beat.

Along with carrying off the strange shifts in genre without any tonal whiplash, Parasite has such a brilliantly structured story. The characters are endearing; the humor always lands; the plotting feels measured and precise, without any contrivances or moments that are not believable within the world of the film. Pieces of dialogue that at first seem like throwaway lines are reincorporated in the film in unexpected and exciting ways, constantly keeping the audience on their toes.

The screenwriting here is so tight, nothing is extraneous or out of place. Everything is in service to either character development or plot progression but does not feel like a laborious exercise thanks to the playfulness and imagination of Bong’s phenomenal direction.

Parasite’s narrative and primary setting in the one location of the stylish, brilliantly designed Park family residence lends itself more to the theater rather than film. With a lesser filmmaker, perhaps whoever will direct the American remake already in development (sigh), it would not have been as visually engaging, as the cinematic minds of Bong Joon-ho and cinematographer, Hong Kyung-pyo inject so much creativity with the camera.

Their spacial awareness and the ways in which the camera is moved and positioned within the enormous, idyllic dream house the Parks live in — whether it’s spacious wide angles, floating tracking shots navigating the house, or the cramped, claustrophobic quarters of the basement — transform the house into a world of its own; a microcosm reflective of South Korean society at large.

A Nuanced Look at Class Division

A noticeable theme present in a lot of contemporary South Korean cinema is a sharp focus on the country’s extreme disparity of wealth and class (see Lee Chang-dong’s excellent 2018 slow-burn drama aptly titled Burning). When Ki-woo begins to ingratiate himself into the Park family’s lives, he and his family begin to hatch a Machiavellian scheme to better their lives by taking advantage of the Park family.

Whereas most Hollywood films would have a blunt force execution in depicting the well-off Park family as one dimensional, evil and immoral people to further the social commentary, Bong goes for a much more nuanced approach. The members of the Park family, while depicted in the film as aloof, gullible and at times completely clueless to the grift they will soon be victim to, are never portrayed as bad people. In fact, it is actually the Kims that enact the more morally questionable actions in the narrative.

This draws a fascinating comparison to another 2019 film that dealt heavily with class, Jordan Peele’s Us. Both films center around the rise of a lower class (In the case of Us, a ‘literal’ lower class). Whereas Us loses its grasp on its social metaphor by depicting the lower class as inhumane monsters emerging from underground which inadvertently demonized the poor, Parasite offers a much more complex representation of their antagonists. Though the way the Park’s act can feel a little over the top, (especially with the matriarch, Yeong-kyo, and her extremely elastic facial expressions), it all feels believable and helps further the film’s social commentary in ways that aren’t so painfully blatant as it was in Us.

The Park’s lavish lifestyle and excessive wealth give them a sly ignorance and an understated snobbery that makes them unaware and so far removed from the struggles of the lower class. Their total obliviousness to the scam being played on them is where much of the humor in Parasite stems from, but exists in the narrative as a whole lot more than just the driving force for laughs.

There is no such thing as the perfect movie. But goddamnit, Parasite comes close.

We are about to be bombarded with awards season contenders in the coming months, but this has set an impossibly high bar for those films to clear. Parasite is an unconventional rags-to-riches story that should not work on paper, but in the capable and masterful hands of Bong Joon-ho, this cinematic Turducken of genre is crafted into solid gold. Darkly satirical, ingeniously written and breathlessly engrossing, Bong Joon-ho’s masterpiece is without a doubt, the best film in 2019.

With the highly coveted Palme d’Or from Cannes already under its belt, who knows just how far Parasite could go in awards season? Because it deserves to take it all.

Thank you for reading! What are your thoughts on Parasite? Comment down below!

[…] largely in contrast to the narratively winding, taboo-breaking thrills of Park Chan-wook, or the genre-defying, intricately detailed films of Bong Joon-ho — but his cinematic voice has remained so distinctive that even after 27 films, he’s […]

[…] capture the theatrical experience as lovingly as Cinema Paradiso. The 1988 Italian film won the Best Foreign Language Film Academy Award and serves as one of the most beautiful love letters to cinema and the wonder it creates in the […]

[…] for Best Picture! Although, with the benefit of some distance from the event to soak it all in, Parasite‘s Best Picture win masked a lot of uninspired nominations and winners, especially in the […]

[…] elsewhere, there was still plenty to get excited about. The love for Parasite — 6 nominations to be exact — continues the unprecedented success for international […]

The cheetah and I venture to say “The VelociPastor” is the best film of 2019.

It’s so incredibly good, I haven’t stopped tihnking about it since Cannes. And going in watching it with as little information as possible is definitely the way to go!
Great review!

Tyler Perry Continues His Financial Success With ‘A...