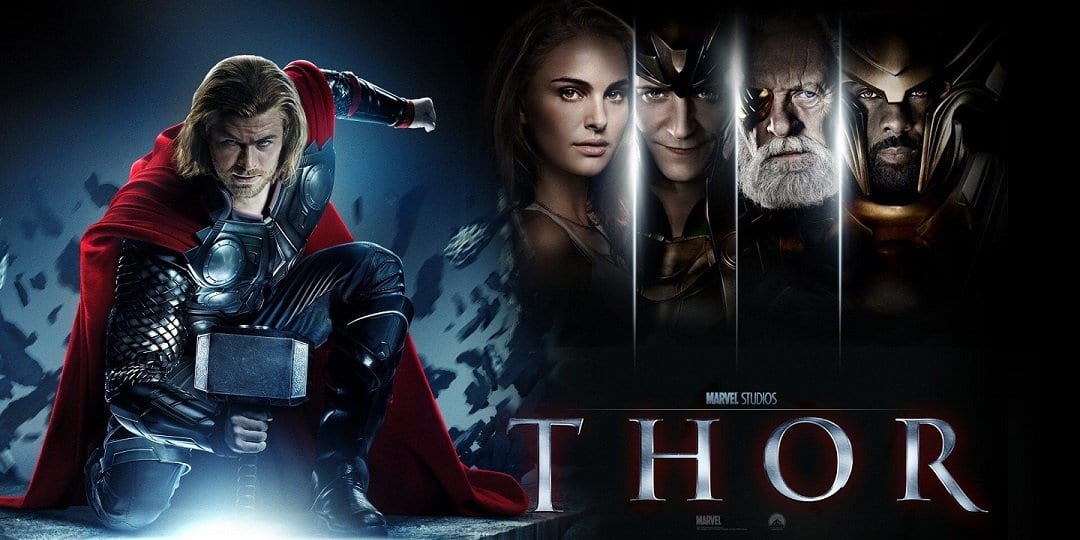 Kenneth Branagh has established himself as a blue chip director in Hollywood.  Before his latest film, Murder on the Orient Express, releases to the public, let’s take a look at one of his more well-known features, Thor!  The following review will be spoiler free. 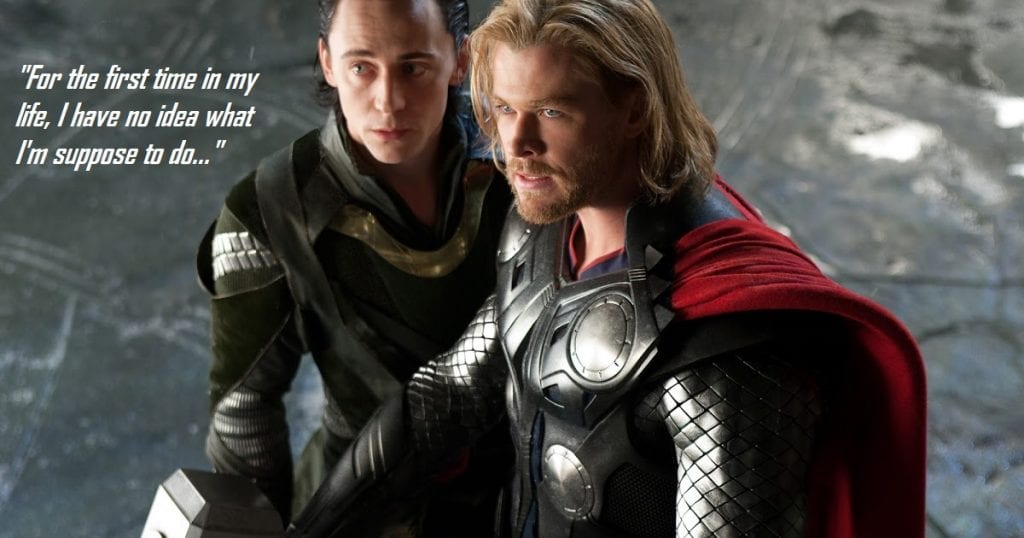 The story of Thor takes us to the fantastical realm of Asgard, a place of gods.  Thor (Hemsworth) is a powerful god, but he’s too arrogant for the liking of his father, Odin (Hopkins).  After reigniting an ancient war, Odin banishes Thor to Earth where he is forced to live among the humans.  To make matters worse, Thor’s brother, Loki (Hiddleston) leads a mischievous plot of his own, threatening the lives of many people in the process.

As with other early Marvel properties, there was a serious amount of turmoil in the pre-production process of Thor.  In fact, Sam Raimi brought his idea for a film based on the character to Stan Lee and 20th Century Fox all the way back in 1990.  But, they didn’t quite understand his vision, causing the project to be disbanded until 1997.  From there, another project gained traction after the success of X-Men back in 2000.  Marvel Studios then planned a television series in association with Paramount.

But, Sony then bought the rights in 2004 with David S. Goyer in talks to direct.  That plan was quickly squashed, however, as Paramount Pictures bought the film rights to the character with Marvel Studios in line to produce.

Once studio issues were figured out, the focused turned towards finding the right creative team and cast.  Before Kenneth Branagh was approached to direct, people such as Matthew Vaughn, Guillermo Del Toro, and D.J. Caruso were reported to be on the shortlist of directors.

Obviously, plans with those three gentlemen fell through, allowing Branagh to tackle the project.

Making this film was a difficult task.  The most resonant superheroes to a general movie audience are the ones that are relatable in some manner.  But, Thor is anything but “relatable.”  He’s a god for heavens sake.  He has no time for most human issues.  To account for this problem, the movie relies on classic tales that are wrapped up in a fantasy story.

In essence, Thor is a small family drama within a blockbuster.  We get to see Loki and Thor battle for the throne of Asgard and impress Odin along the way.  The way this story plays out is very Shakespearean in nature.  So many Shakespeare tales involve ascension to the throne with backstabbing occurring at every instant.  Considering that these stories are among the most celebrated in the history of literature, they’re certainly not terrible backbones for a story.

We all love stories of betrayal and deceit, which is why Thor has enough intrigue for most audiences.  With the help of great writing, Kenneth Branagh brings out this old tale in with enough style to spare.  He uses “Dutch” angles to accent the far-out nature of the title character while perfectly commanding each scene.  All of Branagh’s films feel grand in scale and scope, and that feeling is very apparent here as well.

To continue the idea of Thor as a figurative and literal “out of this world” character, a good amount of fish out of water humor is utilized.  It may be low-hanging fruit for this story, but the film’s humor works to a surprising degree.  The jury’s still out on Kat Dennings, but Natalie Portman and she make for a nice pair as they attempt to understand the mighty god that fell into their laps.

With a character like Thor that has all the strength and power that any man could ever dream of, the humor used in the film helps to bridge the gap between humans and Asgardians.  Although Thor might be all powerful, he still has issues with new circumstances and adaptation, speaking to a struggle that all humans have on some level.

The little intricacies of the script to the film are incredibly thorough, making Thor a solid feature for those that focus on the thematic elements of film.

In all that effort to make Thor seem like a relatable character, however, the film takes a turn for the generic.  There’s so many clever little details to the film, and yet the final act and a half devolves into tropes that we’ve seen far too many times.

One of the decisions made was to give Thor a love interest, but that “connection” feels like anything but, acting as another check mark in a long list of details that are required in a superhero film.  There’s so much intrigue in the interpersonal connections (most notably between Loki and Thor) that are somehow lost in a finale that has neither the spectacle to impress the casual viewer nor the emotion to satisfy cinephiles.

Simply exclaiming that a film is “dull” isn’t proper film analysis, but the reason behind the lackluster feel comes from Thor‘s formulaic structure.  You won’t find any surprises here.  Beneath this film’s glossy, immaculate exterior is a classic story of redemption and family appreciation.  Solid performances and prodution design keep Thor very, very watchable, just know that you won’t need to brace yourself for an unbelievable thrill ride.

Even though it succumbs to generic blockbuster tendencies in its third act, Thor will still entertain fans of the character as well as casual moviegoers.  Kenneth Branagh injected a signature feel into this movie that is markedly different from other films in the MCU while still creating a building block for the films after it to be possible.  It gets a B.

Many would say that Thor is one of the more forgettable films in the MCU.  If I had to choose, I’d probably agree.  But, the film itself is still competently made and well acted, allowing for a fun time for those that seek it out. Thanks for reading!  What are your thoughts on Thor?  Comment down below!

It’s no coincidence that the Shakespeare parallels are present here, since Branagh directed Henry V in 1989 and Hamlet in 1996. I can understand why fans roll their eyes at the forced relationship between Thor and Jane Foster. Through Foster and her cohorts, they’re supposed to humble the Norse God of Thunder and help him care about humanity. He does go through this and yes, one would get excited of having first-hand experience with an actual God. However, it does plant the seeds for one of the many grand faults that ultimately doomed “Thor: The Dark World” with the title of “Worst MCU Film Ever”. Still, Chris & Natalie’s interactions aren’t half bad and feel genuine. Also, Loki’s introduction is fairly solid since he’s mad for not being allowed to rule Asgard, due to the fact that he’s originally from Jotunheim, the land of the Frost Giants. We can agree this and his role as main antagonist in The Avengers was what helped clinch his spot as one of the best MCU villains before he begins on his path towards redemption. Finally, quick shout-out to Clark Gregg as Phil Coulson. Solid as ever, since he’s the key figure for Phase 1. In the end, this film doesn’t come close to terrible. It’s still an entertaining good time and it won’t leave anyone horribly dissatisfied.

Absolutely not a horrible film. There’s a lot of entertainment value here, especially with characters like Loki and Thor as you mentioned. But, when you look at it as a singular film and not a building block for future films, it’s just sort of “meh.”

Agreed. However, when comparing this and the rest of Phase 1’s universe-building with the failings of Batman v Superman: Dawn of Justice, Amazing Spider-Man 2 & The 2017 Mummy, those problems don’t crop up in annoying fashion as they do in the aforementioned films.

Ohh absolutely! These films are definitely on different levels

That’s what I keep saying. Sure, this movie was certainly one of the least entertaining Marvel movies, but was it a bad movie? No way. With the enormous amount of movies that have now been released to date, I still have yet to see a truly terrible movie (and of course I am talking about the movies that have been released since the start of the Marvel Cinematic Universe). Great review by the way ?

Some of them aren’t very good, but they’re all watchable in some way or another! I️ don’t particularly like Iron Man 2, but I️ can still watch it because of RDJ!