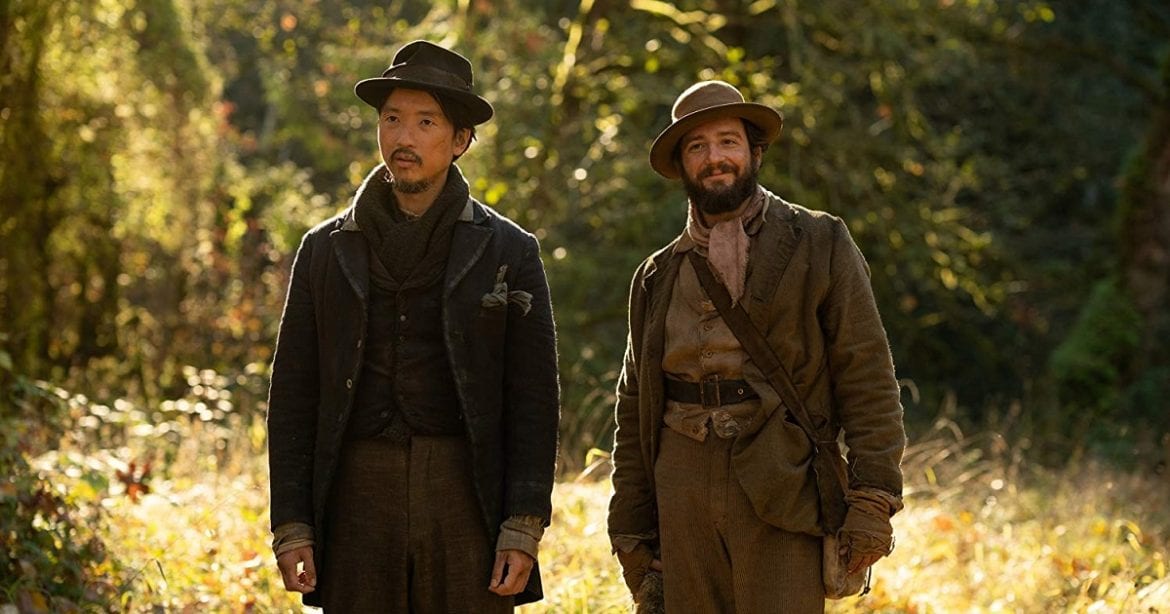 Kelly Reichardt’s latest, First Cow, distributed by A24, is an intimate look at male friendship, the American dream, and baking. Reichardt is well-known for her films about American life, focusing on dire times and looked-over places in the history of the United States. First Cow is no exception, and as someone who saw it in conjunction with two of her other films, she thrives when analyzing the working-class. I want to note that I saw this film with a Q&A with Kelly Reichardt immediately following, so some of the information I am giving I heard right from the director’s mouth. Perks of New York City, folks, and particularly perks of the Museum of the Moving Image in Queens.

Don’t Have a Cow

First Cow stars Cookie, played with big brown doe-eyes by John Magaro, who is with a trapping company making their way to the Oregon Territory. You may know Magaro from Orange is the New Black, The Big Short, and Carol. As his name suggests, he is the cook of the company, and as he is foraging for mushrooms, he finds a naked King Lu, an ambitious Chinese immigrant on the run played by Orion Lee. From this meeting, they forge a friendship and reconnect in the Oregon territory, living together and being adorable best friends. When the Chief Factor, Toby Jones, gets a cow, the first in the territory, Cookie and King hatch a scheme to use the cow’s milk to make oily cakes, a profitable endeavor that they hope will lead them to greater success in San Francisco.

From there, hilarity and drama ensue, but I don’t want to give away too much. The story that Reichardt and Jonathan Raymond, the co-screenwriter and the author of the novel The Half-Life, which First Cow is based off, is simple, but full. There were no twists, no grand revelations, but the plot was steady and engaging throughout.

The acting by John Magaro and Orion Lee anchors this film. Their natural chemistry and embodiment of these characters is incredible, and creates the intimacy that allows this film to flourish. Magaro as Cookie is thoughtful, gentle, and good-humored, while Lee as King is sharp, cunning and resourceful. They make a great team in their characters and as actors, and it’s gorgeous to watch. So rarely am I able to see a male friendship that doesn’t involve any sort of fighting, physicality, or competition. This portrayal of friendship is delicate. The best example I can think of is early on in the film, when King invites Cookie back to his hutch (Reichardt’s own words) and as King goes to chop firewood, Cookie sweeps the floor, airs out the rug, and gets flowers for the mantle. It’s an equal distribution of labor in the domestic space. There’s no shaming Cookie for being interested in traditionally feminine tasks. Cookie’s gentle nature compliments King’s shrewdness, and they are respectful and loving throughout the whole film. It can be directly traced to Magaro and Lee’s chemistry.

Supporting performances from Jones and Lily Gladstone, among others, create a rich world where Lee and Magaro can fully explore their characters. The acting here is superb and I cannot commend it enough. However, perhaps the most superb acting done is by Eve, the titular cow. Her big brown eyes and gorgeous fur are not only beautiful, but full of feeling. This sounds silly, but the bond between Eve and Magaro is so important for the story of the film. Eve was able to completely trust and love Magaro, which allowed for some of the most touching moments in the film. Eve! She’s worth every penny alone.

The costuming and production design, done by April Napier and Anthony Gasparro respectively, elevate this story to new heights. The film was actually shot in the Hudson Valley in New York State, but the lush greenery and towering trees evoke the feeling of the Pacific Northwest. Gasparro did an incredible job of creating the natural world that these characters live in. The environment, the structures, are all so convincing it’s hard to believe this was shot in 2019.

Napier’s costumes are also so accurate to the time period that it’s astonishing. Even the subtle differences between Cookie and King’s outfits are so important. King’s bowler hat versus Cookie’s bucket hat, the differences in their boots, all show their varying backgrounds. What is particularly interesting, there are no pictures from this period. Reichardt, Napier, Raymond, Gasparro, and everyone else who worked on the visuals of this film had to work off textual descriptions, and maps that surveyors made of the territory. It shows an incredible skill in interpretation and I applaud everyone involved in the film for their commitment to research.

One of the most unique things about Reichardt’s films is her inclusion of Native American and indigenous peoples and their stories. First Cow is no exception in this regard, and I had the opportunity to ask her about this. When the indigenous people are speaking, she chooses not to include subtitles. I wanted to ask her about this choice since there were very noticeable times throughout where a language was being spoken that I had never really heard, which goes to show my own ignorance.

She said something really important, and I wanted to note it here. She said, and I am paraphrasing, that the point is not understanding. In fact, if anything should have been subtitled in this period, it should have been the English speakers, for they were the foreigners. With the indigenous population, the call for assimilation was the burden of the settlers in the territory, or so they wanted in more casual settings, as it should be. As English speakers, we take for granted that everyone knows our language. We have never placed the burden of learning how to communicate on ourselves, and Reichardt challenges that with the exclusion of subtitles, which I loved.

I Can’t Ask You to See This Enough

The delicacy of this film is, to me, unparalleled in recent cinema. The closest I can think of is Portrait of a Lady on Fire, which has a similar feel of intimacy, but I wouldn’t really deign to compare the two beyond that. If for nothing else, the story of scarcity and nature is a really interesting one to have in 2020. But, there’s so much more beyond that, that really there’s no reason NOT to see this film. So do it.

Thank you for reading! What are your thoughts on First Cow? Comment down below!

[…] Of course, Varda had beaten them all to the punch 6 years ago, but she wasn’t about to start beef. Instead, Varda just did what she did best: make a great film. And when Cleo from 5 to 7 came out […]

[…] placing her works in the context of her life and her world, so that we might appreciate just how daring she really was as both a filmmaker and a […]

[…] films were only in theaters for a few days and available later on premium VOD. My apologies to First Cow and Never Rarely Sometimes […]

[…] Guns are drawn, people do get shot, but it’s not really an action film. It’s closer to a noir thriller or a modern Western. If you change the time period and make a few modifications, this could have easily been a Western. Seeing as it’s set in Appalachia, with characters living on the land and some wearing Stetson hats, you can see that many of these characters are attracted to the myth of the American West. […]

[…] In the meantime, Pin-Jui starts working with his mother in a factory, where they both endure hard manual labor. Looking for a way to escape poverty and to ensure a better life for his mother, the young adult starts dreaming about a life in America. Soon, he realizes that the only way to make this dream a reality is by marrying the daughter of the factory’s director. Although Zhenzhen and Pin-Jui hardly share any feelings for one another, they end up marrying each other. Another reason why the young man makes this choice is that he knows that he is too poor to marry Yuan Lee anyway. And without telling her anything, he leaves for America. […]