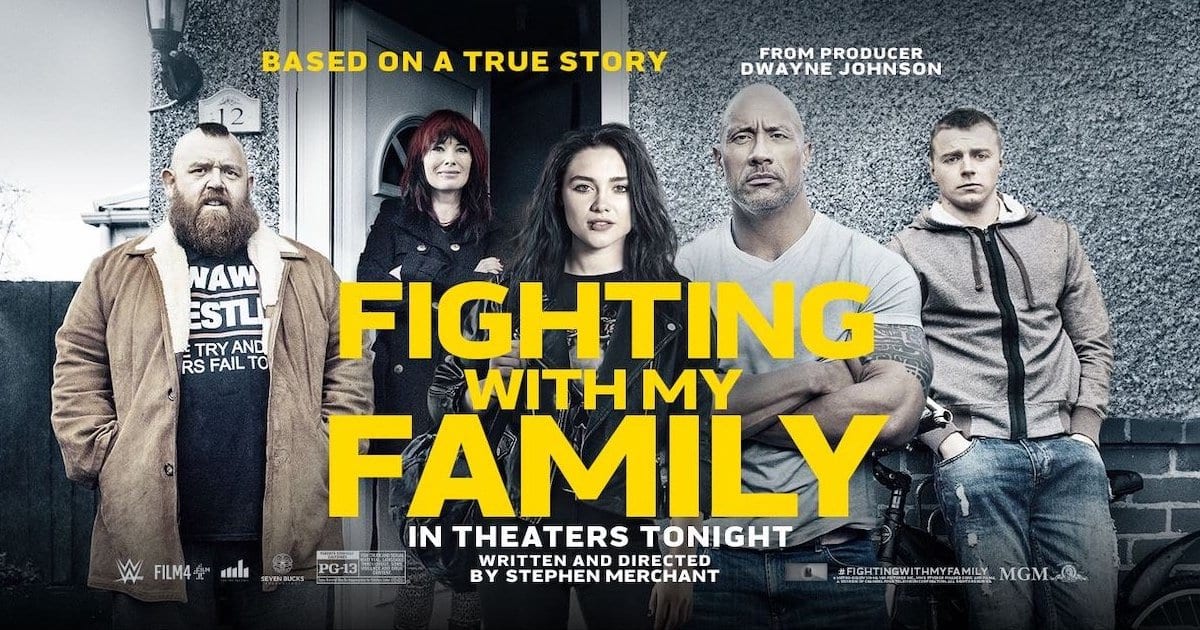 It seems like there are far too many sports biopics that focus on a player, team, or organization, but there’s hardly any biopics on athletes from sports entertainment. With the help of The Rock, the time has come for one biopic to change this trend in Fighting With My Family, a film that focuses on former WWE Diva, Paige, as she grows up in a small town in London from a family of wrestlers.

Born into a tight-knit wrestling family, Paige (Pugh) and her brother Zak (Lowden) are ecstatic when they get the once-in-a-lifetime opportunity to try out for the WWE. But when only Paige earns a spot in the competitive training program, she must leave her loved ones behind and face this new cutthroat world alone.

Paige’s journey pushes her to dig deep and ultimately prove to the world that what makes her different is the very thing that can make her a star.

Inside Look at the World of WWE

As stated before, Fighting With My Family stands out because of its story of a professional wrestler in the WWE. (Though WWE Studios is on the rise and has been producing more wrestling-centric films recently, so this particular film might be the first of many to come down the pipeline.)

WWE needed a film like this to show that it can be as tough as any other sport. Much like other sports, it’s not easy to come into the league and be the best; it takes hard work. We often forget that it’s a serious struggle to break into any kind of entertainment, no matter how silly it may seem on the surface. There are always those people who say that wrestling is fake and scripted, which disqualifies it from being an actual sport.

A Message About Family

Fighting With My Family touches on more than just the protagonist, it also touches on her relationship with her family. Paige came from a family of wrestlers. Her parents got her into the sport, trained her, and ran a family wrestling program. She was pretty much born for wrestling.

The film tackles some issues that Paige went through before she became the next big thing. From getting started to issues with her brother and family, Fighting With My Family dives deep and sends a message about family being an important aspect in achieving one’s dream.

It’s no question that Dwayne “The Rock” Johnson producing the project help this message resonate. Much like Paige, Johnson also comes from a family of wrestlers both with tutelage from both his father and his grandfather. It’s a pleasure to see him take a break from filming his never-ending slate of gigantic blockbusters to tell a deeply personal story.

Florence Pugh’s portrayal of Paige is on the money! She nails Paige’s characteristics, and even has the look! It’s as if we’re looking at a young Paige and going through her life. Pugh is quietly on the rise as an actress, and this film is another win in her young career.

Another great performance came from Jack Lowden, who plays Paige’s brother, Zak. Much like Pugh, Lowden finds a way to enwrap the audience in emotion. The second half of the film touches more on him and his life while Paige is living her dream, and he is very compelling at all times. It’s easy to understand what he’s feeling just by a glance.

The standout here goes to Vince Vaughn. He has shown he can stretch his acting abilities, and he’s starting to do it more in recent years with films such as Hacksaw Ridge. Here he portrays a scout/trainer for the WWE’s development league, NXT. He’s strict, pushing Paige to be her best. Not to mention he’s a great cinematic jerk.

Finally, we have Lena Headey and Nick Frost as Paige’s mother and father, Julia “Sweet Saraya” Bevis and Patrick “Rowdy Rick Knight” Bevis. Of course with Nick Frost, you’re sure to get some laughs thanks to his great comedic timing. Lena Headey also did a good job as Paige’s mother. There are some touching moments between the two as the second act winds down and it made for great drama. The film falters with some very dry comedy at times. The only time when comedy lands are when it contains jokes that only older moviegoers will understand, which seems to be at odds with the dry comedy as it comes from jokes and humor aimed for younger viewers.

Dwayne “The Rock” Johnson has some great moments — he IS The Rock, of course — and makes up for some comedy that fell short.

One of the main reasons sports biopics get made is the fact that they’re good underdog stories. Every sport has multiple, maybe even too many to count.

But Stephen Merchant and Dwayne “The Rock” Johnson were wise to shepherd this film. Paige’s story is big and bold, and something not usually seen in sports films or sports in general.

Image via Revenge of the Fans

Fighting With My Family is the right biopic for the current state of sports films. The cast is dynamite in their portrayals, giving the film plenty of weight. The story is very touching and inspiring; perfect for an underdog story.

This is a really fun look into the WWE, taking a serious perspective to show the true struggle that many individuals have in this line of entertainment. The only negative takeaway would be the dry comedy. Nevertheless, this is one hell of a good sports biopic.

Thank you for reading! What are your thoughts on Fighting With My Family? Comment down below!

[…] Parkes), Darcus Howe (played Malachi Kirby), and criminal defense lawyer Ian MacDonald (played by Jack Lowden, who is truly fantastic). Each of these, whether it be the shot when McQueen slowly zooms in on […]

[…] the film works, it acts as a sweet and charming study of family dynamics. At the center of this particular drama is the regard of parent-child relationships, in particular, […]

[…] by Louisa May Alcott, follows the March girls, Jo, Meg (played by Emma Watson), Amy (played by Florence Pugh), and Beth (played by Eliza Scanlen), with their mother Marmie and their next-door neighbor Laurie […]

Thanks for the review. I’ve been impressed with Johnson’s developing skills, and have been fond of Nick Frost since waaay back, so I was looking forward to seeing this movie as the previews and trailers became coming out. Just arrived at our town theater this week. so I’m making plans. Cheers