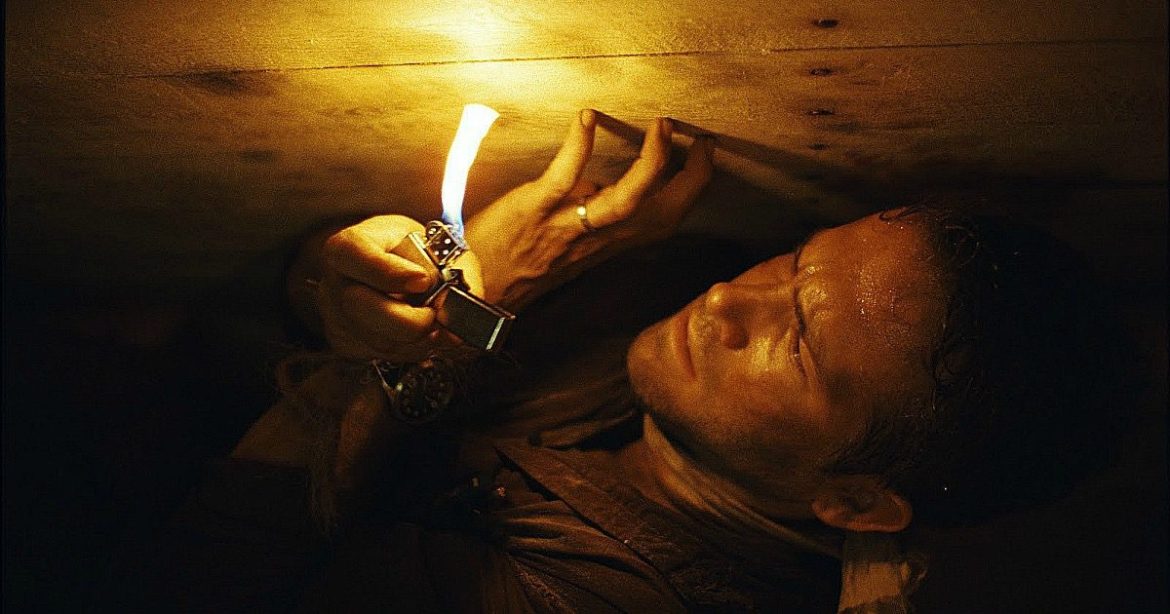 It’s hard to believe that it has been 10 years since Buried was released. I can only imagine that the pitch for 90 minutes of a man in a coffin must have been difficult; and for a movie with all its restrictions, Buried has its fair share of positive and negative attributes. Without a doubt, though, the star of the show is Ryan Reynolds. Granted, he’s the only on-screen character, but Reynolds truly demonstrates the range he has as an actor. Most of us are familiar with Ryan Reynolds playing different versions of himself (or Wade Wilson/Deadpool). So, it’s refreshing to see him take on a non-comedic role! Buried also contains an important message, but sadly, it feels rather sidelined.

A Quick Summary of Buried

This psychological thriller focuses on Paul Conroy (Ryan Reynolds), a truck driver in Iraq. Paul was kidnapped and buried alive inside a coffin. From the moment the movie begins until the moment it ends, we’re in the coffin with him. Paul’s convoy was attacked and his memory of ending up in the coffin is blurry. Armed with only a phone, zippo lighter, glowstick, and a hipflask, he must find a way to be rescued. The movie focuses on the calls that Paul makes during his time underground. Calls range from the man responsible to the bosses of the company he works for. With air running out and sand leaking in, Paul’s chances grow thinner and thinner. The ending of the movie is perhaps the hardest-hitting moment. It’s also entirely unexpected your first time watching Buried.

Ryan Reynolds isn’t a new star by any means. He’s been wowing audiences for years! Since the release of Buried in 2010, we’ve seen Reynolds in many big movies: Deadpool, Green Lantern, Safe House, The Hitman’s Bodyguard, The Croods, Detective Pikachu, and more. In all of these, he mostly plays the wise-cracking, ‘life’s a joke’ character who always has a quick response to any comment. I’m not in any way implying that Ryan Reynolds hasn’t played a variety of roles but Buried shows us another side to the actor’s talent.

Much of the psychological thrills come from sharing in Paul’s anxieties and fears. Within the first few moments, we see him desperately panic to escape. The restricted movement he faces, and the reality of his situation is uncompromising. The audience can’t help but imagine themselves in that scenario. We share the hopes that Paul develops with news of his potential rescue. We feel madness beginning to sink in with each failed phone call. By the end, you feel the same hopelessness as him, to the point of accepting his fate.

The anger, the rage, the disappointment, the fear…these are all emotions that Ryan Reynolds portrays incredibly well in this movie. There were some problems here and there, but that was more script related. (I’ll get to that in a moment.) I also don’t mean for my praise of Reynolds to undermine the others involved in Buried. Almost everything, from the storyline to the soundtrack was done incredibly well. But if this movie had relied on the acting of a less capable actor, it would have been unbearable.

The Message of Buried

Although there is an underlying message buried (pun intended) within Buried, it doesn’t pack a real punch. I can’t tell if it’s the pace of the movie or the focus, but the message becomes fractionated and lost. Within all the crazy phone calls Paul has, some highlight a couple of aspects of society that we’d likely prefer to ignore.

Buried is supposed to highlight the reality of money-hungry companies and apathetic governments. The life of a seemingly unimportant individual isn’t a priority. In comparison, keeping the truth out of the press and away from social media certainly is a priority. Paul repeatedly faces frustrating calls where his disposability and the inconsequential nature of his predicament are made quite clear. It’s implied that Paul’s company creates false allegations to have him unfairly terminated from his contract. This robs his family of any life insurance. More than that, they set the termination date as before his kidnapping, meaning the company can wash their hands of the situation.

Multiple callers reassure Paul that his rescue is their priority, only to quickly change the topic. Motivations become questionable based on the line of inquiry. Telling friend from foe becomes an impossible task. As the movie continues, we want Paul to be rescued. But there’s a growing suspicion that nobody is on his side. Why would the kidnapper let him go after receiving the money? Why would his company help him after already firing him? And why would the government do anything when their stance is quite strongly, “we do not negotiate with terrorists”? We get the impression that the individual is unimportant within a collective society.

The Pros and Cons of Buried

There are many great aspects to Buried. Rodrigo Cortés does an incredible job of making the audience feel like we’re in the coffin with Paul. The angles are claustrophobic, the shots depict Paul’s panic and pain, and many of the zoom outs highlight how alone the character truly is. However, there were a few moments where the zooms added an oddly comedic effect to the situation, which I can’t imagine was the intention.

Chris Sparling did a fantastic job writing Buried, in the grand scheme of things. When the entire movie takes place within a coffin, you really need a good story to keep your audience entertained. We’ve seen similar concepts play out with The Man from Earth, Phone Booth, and even Moon (to an extent). These are all movies that involve only a small group of people in a limited environment. But a coffin is by far the most restrictive. My only real criticism of the writing is that the dialogue sometimes felt clunky and unrealistic. Not only that, but I fear the message of the movie was somewhat lost in the need to maintain the attention of the audience. For example, the scene with the snake and the fire felt wholly unnecessary.

Given that the message carries just as much importance in today’s world, did this movie miss an opportunity?

Overall, Buried is a movie that you might watch once or twice in your life. The storytelling and acting create an intense and claustrophobic experience. But watching a man in a coffin is always going to have its limitations. Ryan Reynolds does an incredible job within this movie, and you really feel the pain and suffering of his character. Although the writing and directing were both great, I definitely feel that it is the acting of Reynolds that holds this movie together. I don’t consider that the fault of those involved, but rather the medium through which the story is being told. 90 minutes may not be long in movie terms, but if you’re used to the regular explosions of a Michael Bay movie, this one might disappoint. However, if you don’t mind a small-scale, anxiety-filled movie, I highly recommend Buried.

Thank you for reading! What are your thoughts on Buried? Comment down below!

[…] explore the story through dialogue and flashbacks. There aren’t police chases or anything akin to The Departed, just to warn you. […]

[…] of the spending nearly the entire film in the car (this movie really is Locke meets Searching meets Buried); that alone would be enough to hook me. Thankfully, Wireless also happens to be a really well-made […]

[…] Its performances are simultaneously expressionistic and vérité, its direction precise and freeing. No film is shot or edited quite like it, and certainly no film has better music direction. It […]

Ryan Reynolds was the best thing in this movie!

Looking at his filmography, this is the only time Reynolds has successfully acted. Deadpool or Pokemon is a “star” performance, he’s being the Ryan Reynolds persona dialled up to 10. He’s almost never played someone apart from himself and when he has, it’s tanked. (Anyone remember Life? Or Criminal? Thought not)