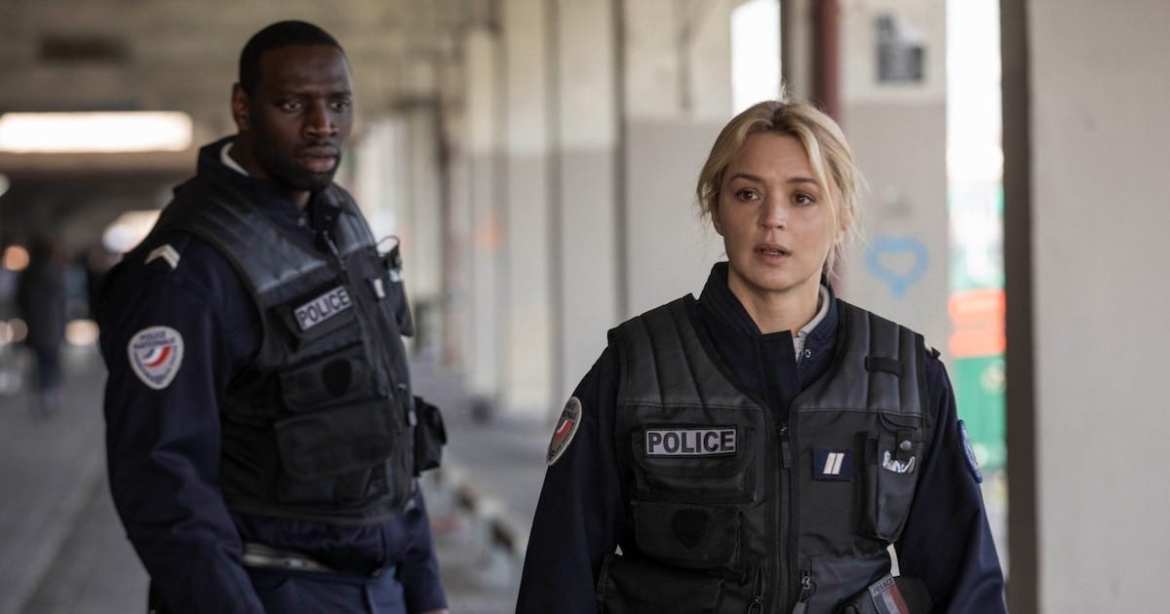 Night Shift follows three police officers: Virginie, Erik, and Aristide. After volunteering for overtime, the trio is tasked with escorting an illegal immigrant to the airport. What could go wrong?

The movie (which also goes by the title Police) is currently being shown at the Alliance Française French Film Festival in Australia. The pace is a little slower than I’d imagined, particularly at the beginning. There is a story being told, but there’s more going on than what you’re seeing on the screen.

Night Shift raises many interesting questions. What does it mean to be a “good” police officer? Is it possible to keep your morality intact while following orders? Is dehumanization just one of many coping mechanisms used within such a psychologically distressing career? But the question I want to ask is: Does Night Shift effectively tackle the societal issues it leans on so heavily?

An Overview of Night Shift

Let’s use the synopsis as a platform through which to bring Night Shift’s societal questions into the spotlight. The movie essentially follows four characters: Virginie (Virginie Efira), Erik (Grégory Gadebois), Aristide (Omar Sy), and Asomidin Tohriov (Payman Maadi). The first three are officers escorting the latter to the airport for deportation. Each is facing their own personal crisis.

We explore the story through dialogue and flashbacks. There aren’t police chases or anything akin to The Departed, just to warn you. Night Shift tells a slow-paced story that brings our attention to real problems that exist in the world today. Virginie, for example, deals with sexism from her colleagues, members of the public, and the system in general. A problem that appears heightened due to pregnancy. This comes with added stress due to the unborn child’s father being her colleague, Aristide, not her husband. Erik’s inability to cope with the stresses of the job makes his constant battle with alcoholism and tobacco addiction evermore challenging. His fractured marriage (to a pill-addicted wife) only exacerbates the situation. Aristide struggles with PTSD and anxiety while trying to maintain the perception of masculinity that others hold to him.

These three officers, in a bid to avoid returning home, volunteer for overtime. The task is simple: deliver Asomidin Tohriov to the airport for deportation. On the way, details emerge about what may await Tohriov in his home, Tajikistan. His traumatic and torturous ordeal leaves the officers with a moral dilemma: Do they allow him to escape? Or do they deliver him as planned, sending him home to God knows what?

Overall, Night Shift is a movie about morality, blame, consequences, and responsibility.

Although the plot revolves around escorting Tohriov, Night Shift leans heavily into its thematic elements. It sets up many important ideas worthy of discussion. Sexism, morality, mental health (including addiction), humanity, and the idea of “good” policing, to name a few. However, it often feels like it spread itself too thin. With a runtime of just 99 minutes, is it possible to delve into all these topics effectively?

Within the first few moments, the movie presents characters with problems in these areas. The psychological impact of handling cases of abuse, from a husband abusing his wife to a mother who “accidentally” kills her son while “teaching him a lesson”. This touches on the overarching theme of the movie: Police officers are human, just like the rest of us. Do they remove their emotions from traumatic situations by dehumanizing those involved, or do they embrace their humanity and suffer moral accountability? Each officer copes with the job differently.

It’s difficult to decide whether Night Shift simply fails to deliver or is actually an artistic masterpiece. The issues it raises are minimally fleshed out and rarely reach any sort of resolution. This should be a flaw, but it could also be the perfect reflection of our society. I can’t possibly dive into each one of these areas, so I’ll focus on two to explain my point.

Night Shift doesn’t shy away from the idea of sexism being an issue in the workplace. Almost immediately, we witness Virginie being the victim of uncomfortable discussions and sexist insults. There’s even a conversation about the fact that two female officers can’t patrol without a male accompanying them. What I found particularly interesting about the last part is how the other cases in the movie connect to this.

It touches on three separate scenes (not involving the transportation of Tohriov): an abusive husband, a mother who “accidentally” killed her son, and a brawl. I believe that the inclusion of these wasn’t solely for character development. Nor was it random. In one, Virginie is unable to properly restrain a hostile (and blatantly sexist) man. In another, she quite easily defends herself and shows powerful self-defense capabilities. A wife can fall victim to her husband, as a son can fall victim to his mother. The use of certain language within these scenes felt intentional: the woman claiming her husband isn’t “evil” and it isn’t “his fault”, and the mother saying she isn’t a “bad mother”. Do we believe one more than the other?

Night Shift seems to ask a question and then answer in multiple ways. Is it inherently sexist for female officers to require male support? Or is there a practical, biological reasoning behind it? At times, I can’t tell if Night Shift is sitting on the fence, playing devil’s advocate, or providing a biting critique of society. It explores multiple perspectives to imply that no social issue is as simple as one thing or the other. We can’t force any event into one of two binary categories. Life is complex!

The topic of moral responsibility is prevalent throughout the movie. Abortion, affairs, drug abuse, illegal immigration, breaking protocol, deportation, etc. All of these raise a question of morality.

Tohirov is being deported after a fire breaks out at the detainment center. Virginie is told that in comparison to sending him home, she’d have been more moral and less hypocritical to simply let him burn. Comparatively, Aristide says they “saved” Tohirov from the flames. Aristide’s willful ignorance is a coping mechanism to help him deal with the stresses of the job. It allows him to avoid the weight of moral responsibility.

When the movie ends, the officers return to their normal lives. Any change is personal, while ‘the system’ remains untouched. The focus of the movie may be the moral implications of allowing Tohirov to escape rather than sending him back to Tajikistan. But in a way, this entire decision is merely a MacGuffin. The movie itself says as much. The characters acknowledge that at best, they’ve delayed Tohirov’s return home and the fate that awaits him there. Their choice to act (or not) is less about saving him and more about protecting themselves. They need to feel moral, even if they changed nothing.

Is an action still moral if done solely to avoid feeling immoral? Is altruism just selfishness in disguise?

The Morality of “Good” Policing

Night Shift leads you to believe that Virginie’s desperate need to be the moral character is driven largely by her non-marital sexual endeavors. Aristide is morally flexible. He wants to appear moral to win Virginie’s affection, but he’d have supported her if she’d taken the opposite stance as well. He bottles up traumatic events to keep his masculine persona intact. His sense of morality has more of an impact than he’s willing to admit. When we learn about his mental health issues, we understand the sense of responsibility these officers experience with each case.

Erik believes that the system ensures the highest level of good. Following the rules limits the risk of emotion-driven judgements. For him, the job is about control and order to counteract the chaos of his home life. His frequent smelling of alcohol without drinking it is a symbol of his constant battle for control over his self-agency. Something he loses in the end. It’s not that he’s unaware of his morality, but rather he is an enforcer of the law and not judge, jury, and executioner.

This raises the question: What is “good” policing?

Should police trust in their own sense of morality? Or should they follow the system, even if it feels wrong? If morality is subjective, what does that say about the power (and sense of responsibility) police officers have? Police either protect the people or they uphold the law. Doing both is impossible as the system doesn’t always protect the individual. Its rules are for the protection of society as a whole. And if these rules were born from a sexist, racist, prejudiced world, then it will always favor one group over another.

Did We Learn Anything?

Night Shift creates a lot of tension that leads to…nothing. With most movies, this would be a major flaw, and perhaps it is here, too. But arguably, the pacing of this movie ties in deeply with the topics covered. It instills a sense of realism. If Night Shift is meant to reflect reality, then the return to normal lives for these officers is realistic. Nothing has changed. The system remains unaltered, unchallenged, and intact. There’s no rebellion, no change to the law, no freeing of illegal immigrants. The movie centers around the decision of whether to help Tohirov escape or not. His fate is delayed, at best. And so, the only people impacted by the actions of these officers are themselves. Everyone else either benefits from or falls victim to the system.

It’s difficult to tell whether this movie artistically explores these topics or simply fails to whatsoever.

Night Shift leaves things in motion without spelling it out for audiences. Do Virginie and Aristide get together? Does Erik kill himself? Were their actions for the benefit of Tohirov, or was it simply that inaction would have weighed on their consciences too much? Did the act of doing “something” offer them a way to return home guilt free? Is that still better than doing nothing? Ultimately, if things remain unchanged, aren’t you still part of the problem? When I first finished watching this movie, I thought it was pretty bad. But the more time I’ve spent thinking and writing about it, the more I’m beginning to believe that it might have done exactly what it set out to do.

Thank you for reading! What are your thoughts on Night Shift? Comment down below!