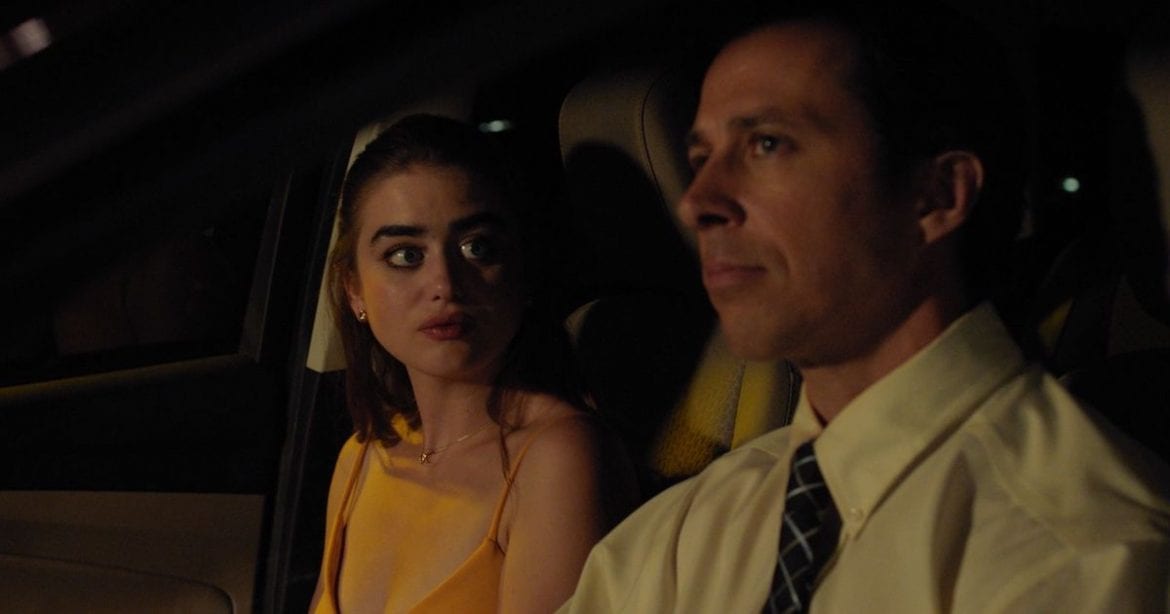 What I expected from The Dinner Party was a wonderful combination of horror films Would You Rather and Ready or Not. Even though those movies are both about playing a traditional game with a horror spin, and The Dinner Party is not, I mainly thought it was going to be alike by being a fun horror flick that takes place on some rich person’s estate where our final girl is constantly running away from danger, but is also kind of a badass. Unfortunately, it turns out that The Dinner Party is kind of like the ugly duckling sister if these three films were siblings.

When our main character Haley (Alli Hart) arrives at the party, we find ourselves with a fairly decent set up for the first act. Hayley is with emotionally abusive Jeff (Mike Mayhall), who forces her to go to this dinner party to try and beg some rich people for some funding for his theater piece. A pretty decent recipe for a horror film if you ask me; that feeling of dread that extremely rich people might be up to no good or have the power to do whatever they want makes for great horror. After a couple of minutes, however, this concept dries out when the main characters settle in, and supporting characters start throwing themselves into the mix.

To start with, it was unpleasant when additional characters were in scenes due to many sound issues. It made me think of something I discussed a long time ago with someone: I find Fifty Shades of Grey has a poor concept and a simple screenplay, but the technical aspects make the movie look and sound great. This then makes it a way more bearable experience to watch, even if the story isn’t the best. At least you are watching pretty pictures and hearing pretty sounds. (Of course, Fifty Shades had a huge budget of $40 million, which absolutely helps.) The Dinner Party‘s sound, unfortunately, turned the movie from being just your regular, mediocre film to causing actual annoyances.

It doesn’t take a technically savvy person to notice the bad sound aspects of The Dinner Party. Every couple of minutes, something about the sound would be bothersome. For the better part of the plot, we are watching a group of people in a hollow room; it was constantly obvious which actors were sitting close to the microphone. The clarity of voices kept changing between different shots, rather than having one constant piece of audio. It would have probably been a lot more bearable if the sound was bad at a more consistent level.

The sound setup doesn’t seem like a practical approach when director Miles Doleac has chosen for characters to speak over each other constantly; rather than a few characters having an actual conversation. Honestly, it made me wonder whether characters just couldn’t hear each other. Also, please don’t insist on making a scene about music if you then drown out potentially important dialogue with that same piece of music.

Backstories Should Not be Dull

So, dialogue; there was a lot of it. Besides finding it hard to follow because of the sound (I’ll never get over it), the dialogue scenes were clearly meant to set up a bunch of foreshadowing and add background on what the rich people were doing; however, it was plain dull at times. It also feels like The Dinner Party is spinning its wheels in places by wasting an hour of valuable time for characters to talk about their favorite wine.

To be fair, there was some interesting dialogue, mainly from Alli Hart’s Haley, who was probably the most interesting character. By this point, I know you are sick of me saying it, but still, a huge detractor was the sound in making the dialogue completely uninteresting, even when Haley was threatening to break through with something worthwhile. When constantly distracted by weird interference or audio cuts, staying engrossed is challenging.

At times, there were more monologues than dialogues due to many characters blatantly starting to tell stories; no one was reacting to each other, with a few exceptions. Some of the delivery of these monologues were bland at best; the actors perform them in monotonously, hardly showing an interest in drawing in the audience.

As far as the acting goes, I think Alli Hart was a fine choice for playing Haley. Having not seen her before, she was a decent leading lady, and I wouldn’t put it past her that we’ll hear from her again. However, a lot of the other performances fell flat; it would be interesting to see if Alli would still stand out in a higher-performing cast.

Even though The Dinner Party attempted to remain plausible throughout, the ending was laughable. I am totally getting what y’all are trying to do here, but I can’t say it really worked for me.

In most cases, whether the final girl lives or dies in the final act usually wouldn’t make a movie better or worse, if done right. In this case, even though we watched her for nearly two hours, Hayley didn’t go on enough of a journey either way. We got some information on her background and some twists and turns added in the end, but none of it is really much to write home about. The ending was probably meant to feel unique and original; some elements felt thrown in at random; the slight character development was not enough to make it feel like a credible solution.

Horror done badly can be super enjoyable and fun to watch, and I for one am totally not bothered by a poorly executed slasher. Often these movies don’t take themselves too seriously, or additional comedic elements make it more fun. The Dinner Party, unfortunately, wasn’t good enough to be a good horror movie; it also didn’t reach the required enjoyability of a bad horror movie. I can’t say I would dine here again.

Thank you for reading! What are your thoughts on The Dinner Party? Comment down below!

'The Binding' Is the Perfect Example of Almost Everything that Can Go Wrong in a Horror Movie | MovieBabble October 13, 2020 - 10:14 am

[…] of another dead bird. Emma sees the mother of her fiance handing over a strange potion. And before dinner, everybody murmurs a strange […]

‘Nobody Sleeps in the Woods Tonight’: Much More...