‘Sextuplets’ Fails to Provide Comedy, Family Values…or Anything Else of Note 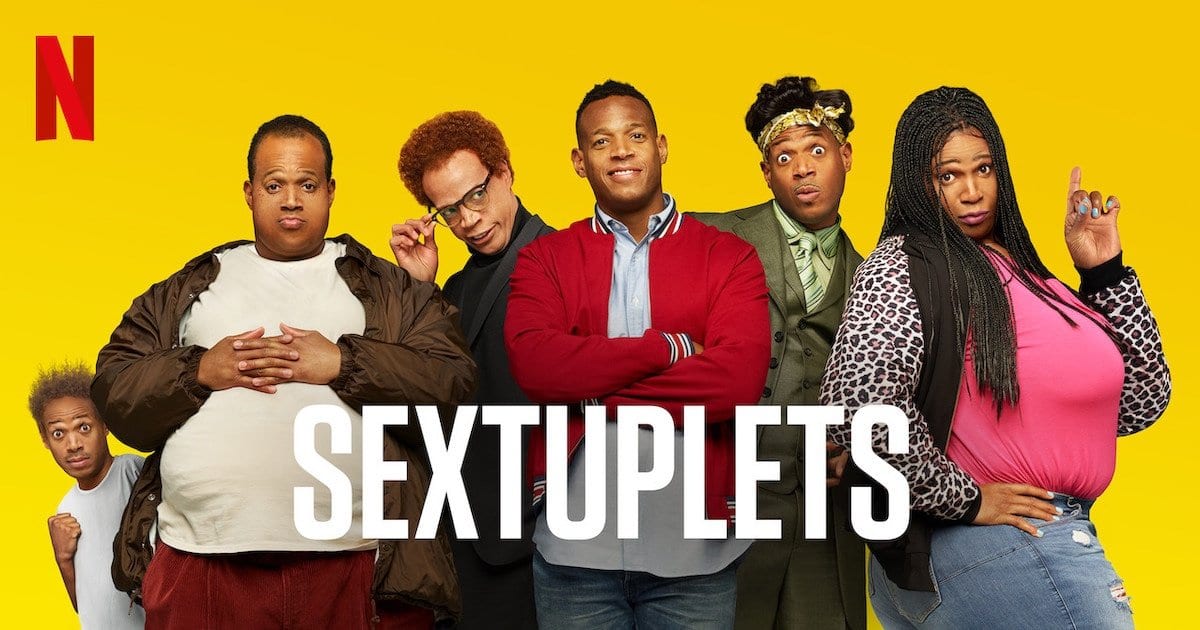 Sextuplets is the latest comedy released by Netflix. In a similar manner to The Nutty Professor and Norbit, the gimmick of this movie is that one actor plays multiple characters, several of whom are female. Starring Marlon Wayans, the trailer for this movie gives you the impression that it may just be random and ridiculous enough to be entertaining. Sadly, it comes across as mostly cringey, and not in a funny way.

After being lectured on the importance of family by his father-in-law, Alan (Wayans) decides to track down his birth mother. He also has a child of his own on the way. As such, the clock is ticking to learn the reasons why he was put up for adoption as a baby. Making one shocking discovery after another, Alan learns that he not only has a twin brother, but his mother birthed sextuplets.

Deciding to track down his other four siblings (who are all played by Wayans), Alan finds himself in increasingly dire situations. With problems at home and at work becoming intertwined with his quest for family, Sextuplets takes audiences on a ridiculous journey. With tensions building and new relationships being challenged, the movie attempts to drive home the importance of family.

The idea of a single actor playing multiple roles isn’t an original one. We see it happening in different forms. For example, you have Monty Python movies where each main actor plays a whole range of roles. When it comes to comedies similar to Sextuplets, you might think of Eddie Murphy in The Nutty Professor or Martin Lawrence in Big Momma’s House. In reality, Sextuplets is perhaps on a closer level to Jack and Jill or Norbit.

At its core, Sextuplets is perhaps a journey to learn about the true meaning of family. This is a noble enough motivation for any movie, but it is one that doesn’t always play out on screen. However, there are many movies that revolve around the importance of family and still have great content and are entertaining to watch. All without the message feeling forced or overbearing. Big Fish, Meet the Parents, Parenthood, Mrs. Doubtfire, and Little Miss Sunshine, just to name a few. Where these movies use family as a part of the plot, Sextuplets relies on it as the glue to hold the content of the movie together.

Yet these movies have something that Sextuplets lacks. I’m not referring to cross-dressing (as Mrs. Doubtfire has that), but rather, heart. There are many moments that could have carried some emotional punch. Instead, Sextuplets simply skips past all of that for cheap comedy and rather basic writing. Wayans may not provide comedy that requires deep thought, but he’s always been capable of making audiences laugh.

Sextuplets Does Little for Wayans

Wayans has written and starred in several entertaining comedies in the past. The most notable of these would be White Chicks and Scary Movie 1 and 2. He and Alvarez were both involved in writing Haunted House and Haunted House 2 as well. Their involvement in these two movies could have been an indication to us that Sextuplets would be a bit unremarkable.

A single line right at the start of Sextuplets reflects the writing quality. Alan tells Marie, “listen, nothing is more important to me than my family. Not even a partnership at the company that I’ve been busting my ass for all these years.” Something about this line just sent a shiver through my soul. It didn’t feel organic or natural. It felt forced and desperate as if written by a high school student in English class.

When it comes to a comedy such as Sextuplets, you’re not expecting writing that can be compared to Shakespeare, but there still has to be some degree of quality.

Speaking of comedy, the jokes are weak and quite simply not funny. Some of the recurring jokes for this movie might make you smile the first 2 or 3 times (maybe). But after the 7th, 8th, or even 9th time, you can’t help but roll your eyes.

Sextuplets is what happens when a writer asks the question, “what completely ridiculous and unlikely situation can this character end up in next?” For some movies, this works, but for Sextuplets, it doesn’t. I couldn’t help but feel like this movie ran with its first draft without a second thought. The writers may as well have gathered around a table, added idea after idea, thrown in some loose and on the nose dialogue, and then gone ahead with filming.

Overall, I find myself with very little to say about Sextuplets. This type of storyline only works within the context of a comedy, and yet this movie simply isn’t funny. Watching an actor in a fat suit might have worked for Eddie Murphy on a few occasions. It may even have slightly worked for Martin Lawrence, but it simply fell flat on its face for Marlon Wayans.

Despite my incredibly immature sense of humor, I didn’t laugh once while watching Sextuplets. The movie even failed to deliver any real message about the importance of family, despite setting out to do just that. With its short runtime of just 1 hour and 37 minutes, it still manages to drag on much longer than feels necessary.

Do you find yourself wondering whether this movie is worth a watch? If so, my advice would be to give it a hard pass.

Thanks for reading!  What are your thoughts on Sextuplets?  Comment down below!

'The Binding' Is the Perfect Example of Almost Everything that Can Go Wrong in a Horror Movie | MovieBabble October 13, 2020 - 10:23 am

[…] even clearer during the night when Sofia gets bitten by a spider. Emma begrudgingly allows her mother-in-law to apply one of her concoctions but eventually takes her daughter to see a doctor. Moreover, she is […]

I will give that one a miss then.

I watched it. Why? Because I’m an old Wayans Fan. Sadly it was indeed disappointing.

The performances seem forced, the jokes were old & recycled, and also seemed too Tyler Perry-ish. Marlon, although talented, just isn’t that funny. Honestly? He never really was. He’s good at his craft but it always seems like he’s missing something. I became bored & distracted from the entire thing, but I forced myself to watch it to the end.

I gave a semi-smile or two, but it didn’t leave me laughing. It was DRY. Marlon is my next favorite Wayans brother after Damon, but he just hasn’t hit it for me. I think he needs to update his comedy routine and stand out on his own thing. No more REPEATS. He needs to put his own “STANK” on it, cut his own path, and be ORIGINAL. Because this movie? Smh…Uhhh, no🤦🏾‍♀️