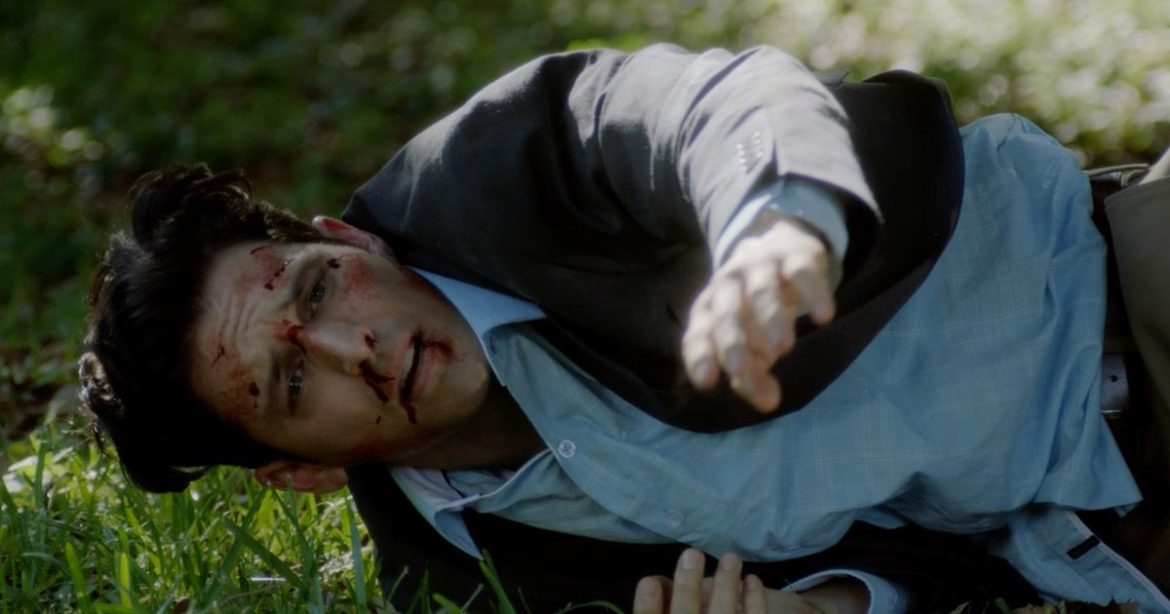 Don’t Look Back starts with a haunting montage of (what looks like) real-life footage bystanders shot on their phones of people being attacked… or worse. Immediately, you begin thinking about what role you would play should you find yourself looking on at such an event. Would you get involved or retreat into the crowd?

After a traumatic event in her own life, Caitlin (Kourtney Bell) witnesses an act of violence on a stranger in the park. She looks on with other bystanders, although Caitlin eventually stops someone from filming the event and calls the police. At least she does something, but Caitlin and the rest of the group not directly interjecting leads to the man being beaten to death. It doesn’t end there as it seems that Caitlin and the spectators of the event become victims themselves to a dark force exacting revenge.

Don’t Look Back provides upsetting criticism of blame culture, and the general desire for karma to be served in every situation without proper context. Do bad things really always happen to good people and vice versa, or is it less black and white than that? There is a constant whirl of characters seeking vengeance for being wronged. Those situations were framed where you can certainly feel some empathy as to why, while also critically reflecting if this need for revenge puts the characters themselves on the “wrong” side of the story.

During the first act of the film, I worried that the plot would be a tad predictable, so I went ahead and actually wrote down my ideas of what I guessed was coming next, to later compare with what actually did happen. Luckily, I was pleasantly surprised that the film took a different route in the third act than I anticipated. The eventual revelations were still not extremely surprising, though some of the themes explored in the ending were still thought-provoking and a cut above.

Don’t Look Back is Final Destination writer Jeffrey Reddick’s feature directorial debut. If I hadn’t known that, I still would have felt the similarities. While Final Destination is about being unable to escape death when it’s “your time”, Don’t Look Back shifts the focus to karma. Still, in each film, the characters meet their demise one by one by some evil force. While not hugely original and possibly a little overdone, it’s still a bit of fun.

Leading lady Kourtney Bell carries the film well and is a solid scream queen. Some of the supporting characters, unfortunately, were plain in comparison. Caitlin’s boyfriend is quite an uneventful character with hardly any real use, for example. I can maybe pinpoint one scene where he impacted the plot; Caitlin could have been single, and it would not have made much of a difference.

Ultimately, Don’t Look Back is a film with a definite sense of allure. Even though it tends to fall a little flat, it’s a fun watch for this Halloween season.

Thank you for reading! What are your thoughts on Don’t Look Back? Comment down below!

‘They/Them’: A Harmless Slasher Movie that Will Nonetheless...