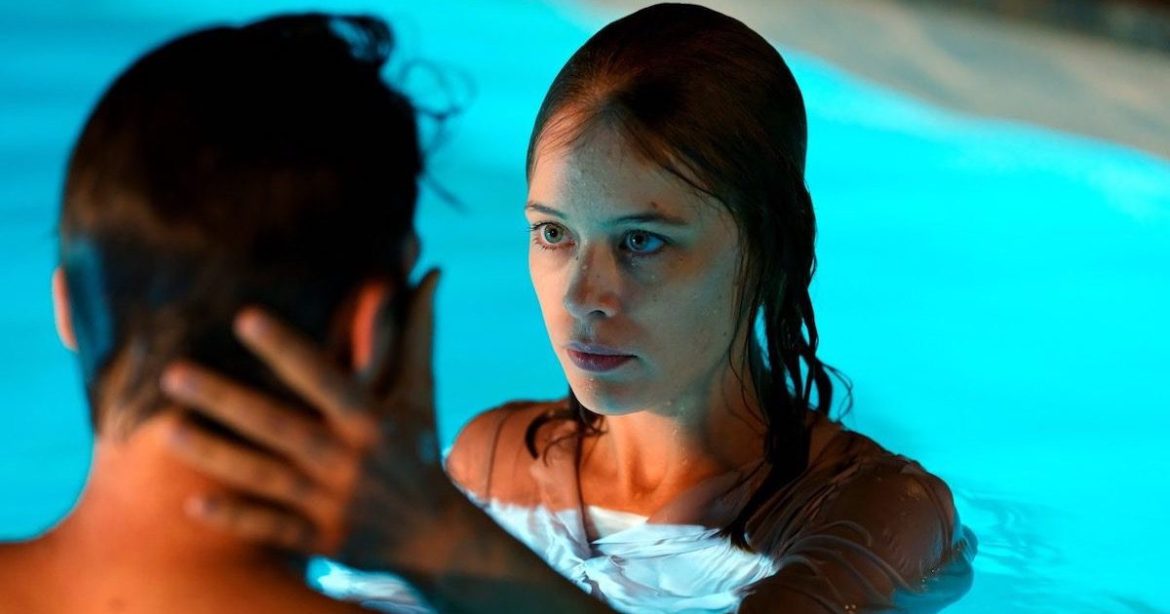 What happens when you mix threads of The Shape of Water with economic European storytelling and pervasive sadness? You probably get something like Christian Petzold’s Undine, an update of the European mythology in which a water nymph becomes human when she falls in love with a man but will die if he is later unfaithful to her. Most likely, you’ll have no prior knowledge of this fairytale (like me), but Petzold strips Undine down to its bare essentials, instead focusing on the intense romantic longing between the characters.

You’ll know immediately something fantastical is happening, as in the opening scene, Undine (Paula Beer) tells her boyfriend Johannes (Jacob Matschenz), “if you leave me, I’ll have to kill you”, following his attempted breakup at the café they frequent. Although a bit skeptical, you can tell Johannes is a bit startled, that he knows something is coming his way if he follows through on leaving her. While she looks very human, Undine reacts slightly detached, as if indicating an otherworldly (and possibly dangerous) presence.

Their talk occurs across the street from the Berlin City Museum where Undine works as a historian and gives many long talks about the history of the city. The film spends a lot of time on Berlin’s changes, explaining influences such as the Berlin Wall on the city’s structures. Frankly, it’s too much time. (Did you know what is generally considered the heart of Berlin used to be near its western tip before the city expanded in that direction? Architecture facts!) Following Undine’s speech after her breakup with Johannes, we are introduced to Christoph (Franz Rogowski, who previously starred in Petzold’s Transit), a kind, disarming man who immediately strikes up a relationship with her. He’s also a diver — pretty convenient for a water nymph.

The film follows their relationship for quite some time and takes on a mythic sensation. Time seems to simultaneously stand still and speed up; they’re always preparing for the other to visit, and you feel like they’ve spent an eternity together already. Still, you always sense Undine has an eerie attachment to Johannes. Petzold imbues Christoph and Undine’s relationship with a simmering uneasiness: they’re very in love, although it never once seems like it will end well for either of them.

Undine is a tragedy through and through, with characters seeking connection they know probably won’t last. The film speaks strongly to our inability to rid ourselves of past romantic trauma, with characters seemingly unable to fully latch on to the present moment. Petzold connects this feeling to the structures of Berlin, which are still very much rooted in their original designs even if the city has changed dramatically over time. The connective tissue between the two ideas isn’t exactly strong, but watching Petzold try to bring detailed sociopolitical ideas to this fantasy story is transfixing nevertheless.

Thank you for reading! What are your thoughts on Undine? Comment down below!