‘The Swerve’ Is an Epic Downer of a Movie 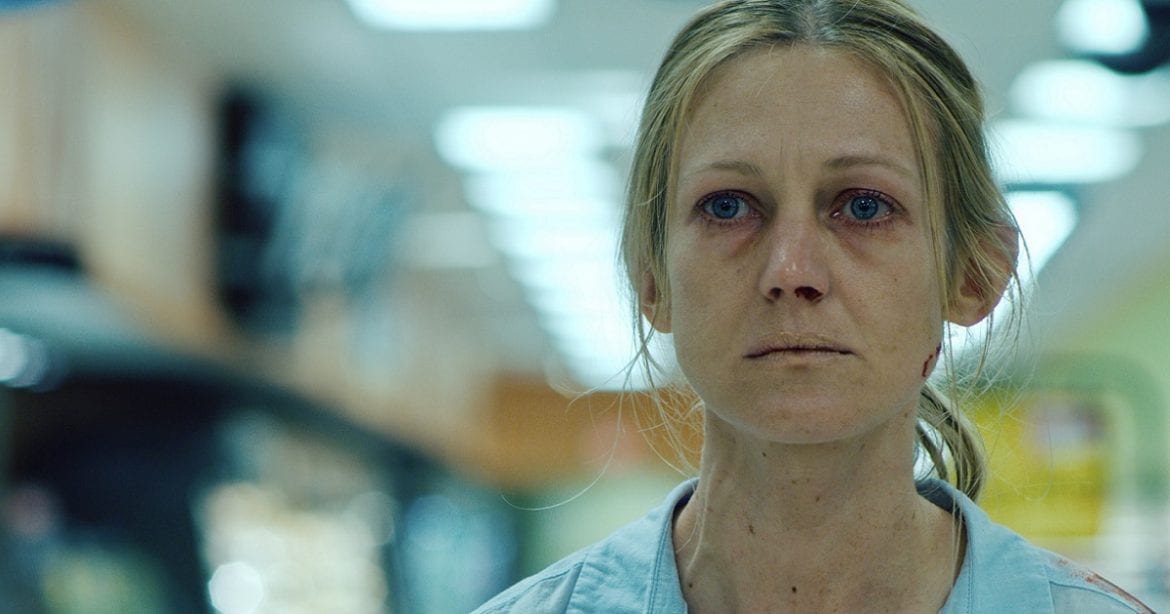 With all that 2020 has thrown our way, I don’t blame anyone for seeking soothing, uplifting entertainment. We need every excuse to inject a little happiness in our lives! With that in mind, Dean Kapsalis’ The Swerve may not necessarily be for you — it’s one of the most actively depressing and harrowing movies I have seen all year.

Holly (Azura Skye) is a teacher, wife, and mother, who struggles mightily with insomnia. Her medication doesn’t seem to do the trick, and although her life seems fairly normal, nothing seems to put her mind at ease. Holly’s husband Rob (Bryce Pinkham), while up for a big promotion at his job at the local supermarket, isn’t exactly very comforting and appears largely distant; her kids are bratty teenagers who only complain and loaf around; her sister Claudia (Ashley Bell) has many vices and only exacerbates Holly’s underlying insecurities, many of which come from childhood.

One particularly heated argument between Holly and Ashley causes Holly to leave their parents’ house early. On the car ride home, a car full of rowdy guys comes up on Holly’s tail, honk uncontrollably, and threaten to run her off the road. Despite many gestures pleading with them to go around her, the punks keep coming back. Fearing for her safety, Holly eventually retaliates, and the punks perform the titular swerve off the road — possibly to their deaths.

Or does she? Director Dean Kapsalis plays with Holly’s sense of reality as well as the audience’s. (The road rage scene does feel very off, but not too off to tip it either way.) Daryl Pittman’s depressive, yet naturalistic cinematography blurs the line between hallucination and real life as Holly’s mental state continues to decline and the possibly real tragedy weighs heavier on her. If what’s happening to Holly is occurring in her head, those around her are oblivious to clear cries for help. If the events in The Swerve are actually happening, then Holly lives a sad existence where no one cares enough to intervene. Either way, the film is unbelievably troubling. Lars von Trier might even wince at the amount of internal human suffering on display.

Although much of The Swerve plays with the question, “is this happening or not?” that many sensationalistic genre movies take and run with, it avoids reveling in Holly’s pain, and this is largely thanks to Dean Kapsalis’ stripped-down direction. What transpires is still very upsetting, but it’s far more honest than the usual psychological thriller. 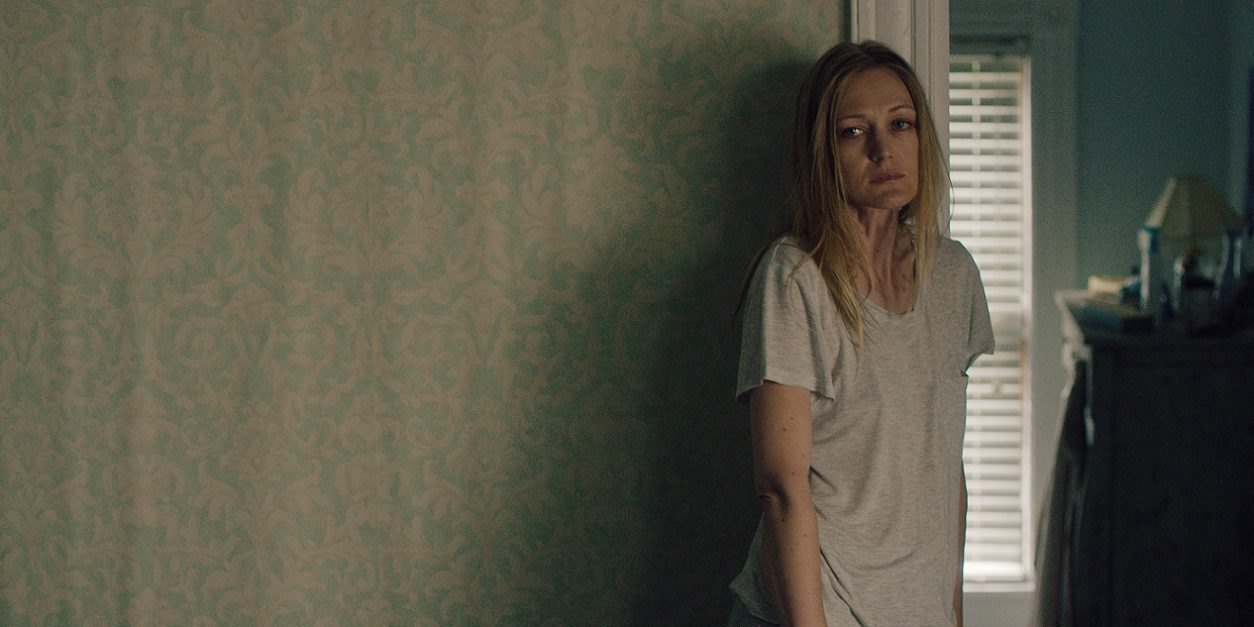 Azura Skye does most of the heavy lifting for The Swerve. In a perfect world, this is a kind of performance worthy of an Oscar, or at least a nomination. (But we know this won’t happen because The Academy is LAME.) Her physicality (or lack thereof) is unbelievably distressing. She looks so tired and frail; her zombie-like movements are excruciating to watch at times. Her dark circles even remind me of Nicole Kidman‘s makeup raccoon eyes from Destroyer.

The script is also wise to have other characters comment on how she looks. People can notice her physical decline, but the sad part is it doesn’t occur to them that it’s the result of more distressing internal problems. Or, maybe they just don’t have the empathy required to care. General human decency isn’t something the supporting characters have. Apathy is the real culprit behind all the suffering Holly endures.

In many ways, The Swerve is also a great depiction of the struggles of motherhood taken to their most extreme: she does so much to keep the family afloat, and yet the rest of the family rarely acknowledges it and treats it like a given. It’s a little trite, but you have to wonder what a simple “thank you” or “I love you” would have done for Holly’s condition. Maybe a random act of kindness would have led Holly down a better path.

She has no safety net, so she’s left to descend further into her troubled mental state. A troubling relationship with her student Paul (Zach Rand) begins, mostly to see if she can feel anything anymore. And later, we see her in the most upsetting pie-eating scene I can ever recall, which somehow manages to get worse even after it’s already too much to handle. Eat your heart out, A Ghost Story! 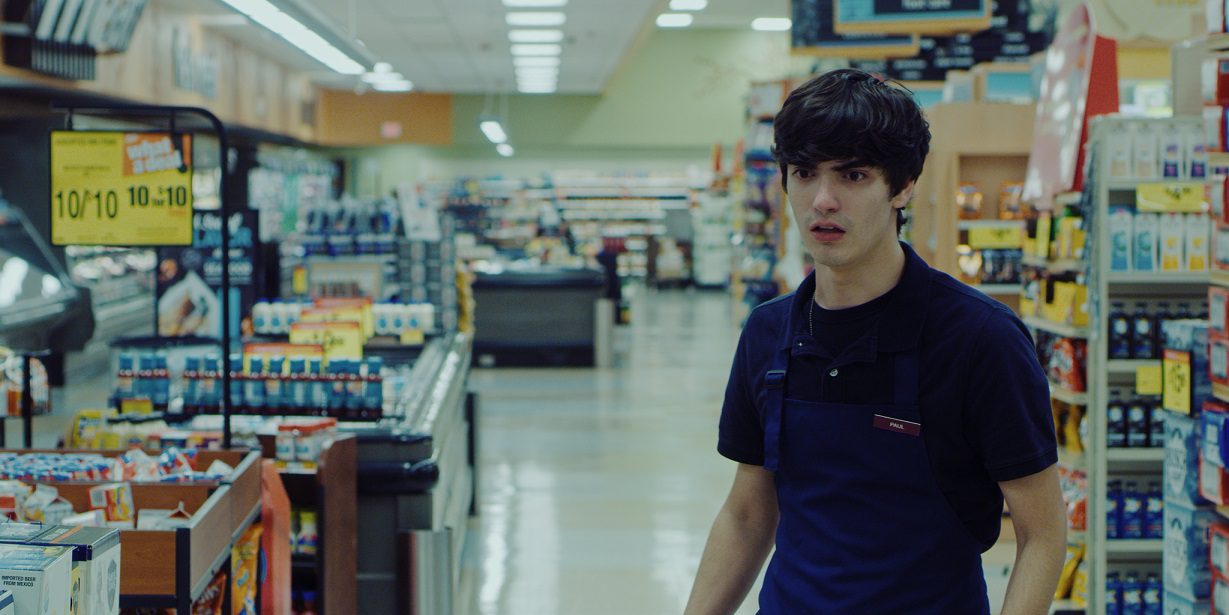 But let’s double back to that weird student-teacher relationship, which I think holds a lot of where The Swerve is lacking. I wish the film was even hazier about what is actually happening. As you watch Holly and Paul interact, you continue to wait for the shoe to drop, for Kapsalis to reveal something new, but that moment never comes. The relationship functions mostly as a red herring, and also contributes to The Swerve‘s slight pacing problems and its most overdramatic moments. However, it is thoughtful in displaying how someone’s self-destructive tendencies pass along to others. Similarly to Amy Seimetz’s fantastic She Dies Tomorrow, you get the feeling Paul will have some sort of newfound existential dread after his interactions with Holly that ultimately consumes him.

In any case, The Swerve is a provocative look at the feeling many have in which the world is seemingly stacking everything against you, to the point of suffocation. With this being Dean Kapsalis’ feature debut (as a director, writer, and editor no less), there are surely more great films to come from him. Hopefully, they’re a little more lighthearted — I’m not sure I can handle another film like this one.

If you are struggling or know someone that needs help, please reach out to the National Suicide Prevention Hotline.

Thank you for reading! What are your thoughts on The Swerve? Comment down below!

[…] on the evening of the first day of Renesha’s new job. Test Pattern slowly morphs into a psychological thriller. Renesha receives a telephone call from Amber (Gail Bean), one of her friends, asking to go out. […]

[…] film of 2020 that I likely will never watch again simply due to the fact that it is one of the most horribly depressing films I have ever watched. Despite this, I was deeply moved by this film. It allowed me to […]

I Finally Watched ‘Memoria’ in Theaters and It...