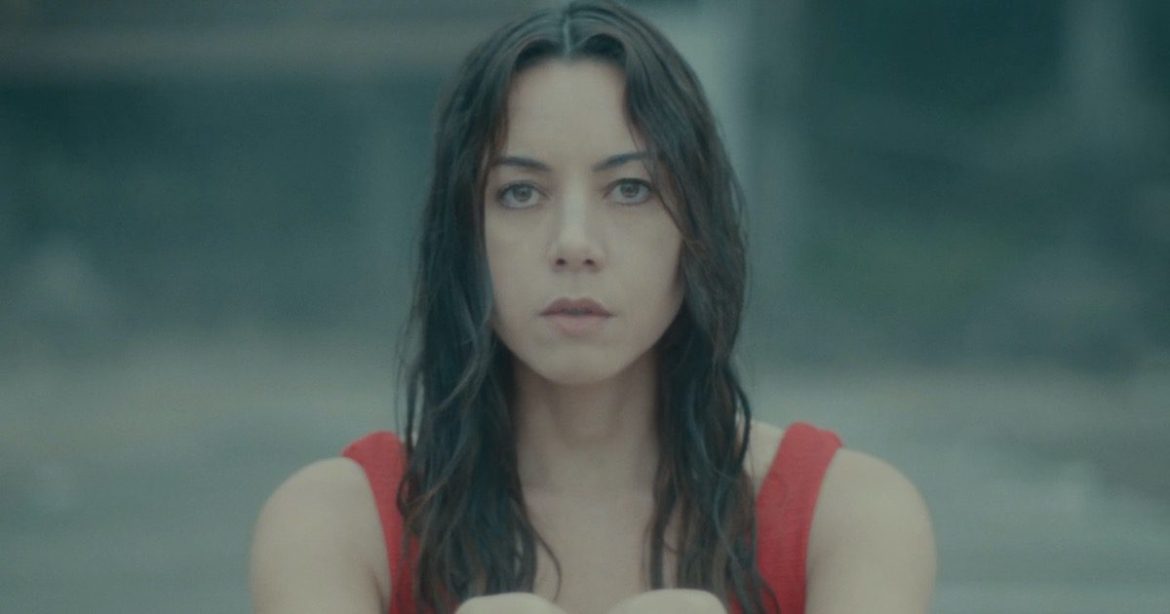 The filmmaking process is a subject often explored in movies. This same weekend, we’re getting David Fincher’s Mank, and years prior have given us Adaptation, Operation Avalanche, Barton Fink, and many, many more. Black Bear can easily be lumped into this subgenre, but it finds its own voice through Lawrence Michael Levine’s screenplay which employs numerous instances of subtle reincorporation.

The film begins seemingly normal. It’s a fairly simple story that many people have seen before; nothing too special. It starts with Allison sitting on a dock. Later we find out she’s a director who has come to formulate a script in a remote cabin. The only other occupants are a couple who can be seen to have a strained relationship. The woman is pregnant, but this doesn’t seem to diminish the disgust the couple has with each other. Eventually, they have dinner. Here, the three of them discuss gender roles and family, with the tension between them increasing at a staggering rate. This section of the film plays out until we’re snapped to a different, yet similar, story, beginning another conflict.

The majority of the film focuses on a film crew as they struggle to finish shooting. The film the crew seems to be shooting bears a striking similarity to what was shown in the first forty minutes. Throughout the second half of the film, chaos both having to do with time management and emotions ensue. The director Gabe, played by Christopher Abbott, is mentally abusing his wife, Allison, played by Aubrey Plaza, through the use of mind games that play off of her insecurities and fears. Gabe toys with her emotions and creates fraudulent scenarios with the other leading actress, Blair, to get the best performance possible from Allison. It’s a scenario that’s been seen a plethora of times in real life. There are obvious examples such as Hitchcock and Kubrick, but other directors including Darren Aronofsky and Lars von Trier have used the same methods to get the best performances from their actors/actresses. It’s not shown whether the movie was a success. The damage is done.

The biggest theme Black Bear tackles is that of identity and how strongly one’s identity can dictate their ideas. Characters are constantly making promises they cannot uphold and pay for it in the end. Both of the stories have different setups, but even with different roles, their downfall is the same. The constant deception the characters show to each other brings about hardship and pain.

Without the main three actors’ talent, none of this would be possible. Aubrey Plaza, Christopher Abbott, and Sarah Gadon give some of the best performances of the year, and it would be a shame if none of them won any awards for it. The scenes in particular where they’re acting in-universe are where they shine the most. These scenes make it so they have to change their emotions and even their character on a dime, and they pull it off perfectly.

As for the script, parts of it can be slightly derivative of other films, namely Denis Villeneuve’s Enemy and David Lynch’s Mulholland Drive. The cut from the first half to the second is a little bit jarring, making the second story slightly difficult to get used to. Still, Black Bear is highly ambitious, blending comedy and drama into a wonderful genre-bending experience.

The connection between the two stories is somewhat hard to decipher, but I’ll say what I think it meant. The two stories are simply scripts in Allison’s head. She makes the Allison character a self-insert in order the express her major life events. One of the biggest themes in both stories is deceit and this heavily mirrors how Allison may have to lie to herself for her script to work, or even have to change her script to make it more palatable to a wider audience. The relationships displayed in both stories both have similar plot beast, leading me to believe they were written by the same person: Allison. This could be what’s going on, but maybe it’s not; maybe none of it’s real in the first place and only an afterthought in some other character’s head. This is all part of the ambiguity Black Bear strives for.

While the overall plot structure of Black Bear isn’t the strongest, it still delivers an ambitious story with wonderful performances. None of the actual filmmaking is too special or immersive, but that’s not the focus. Lawrence Michael Levine made a puzzle-box type movie which is easily one of the most interesting ones 2020 has to offer.

Thank you for reading! What are your thoughts on Black Bear? Comment down below!

[…] a pact to kill themselves at the end of the day. This pact leads Val (Jerrod Carmichael) and Kevin (Christopher Abbott) on an adventure that gives insight into each of their pasts and how they ended up where they are […]

[…] are a detriment to good writing. They create clichés, generalize the vast amount of nuance many cultures hold, and worst of all, […]