‘The Wanting Mare’ Is a Dreamlike Film, for Better or Worse 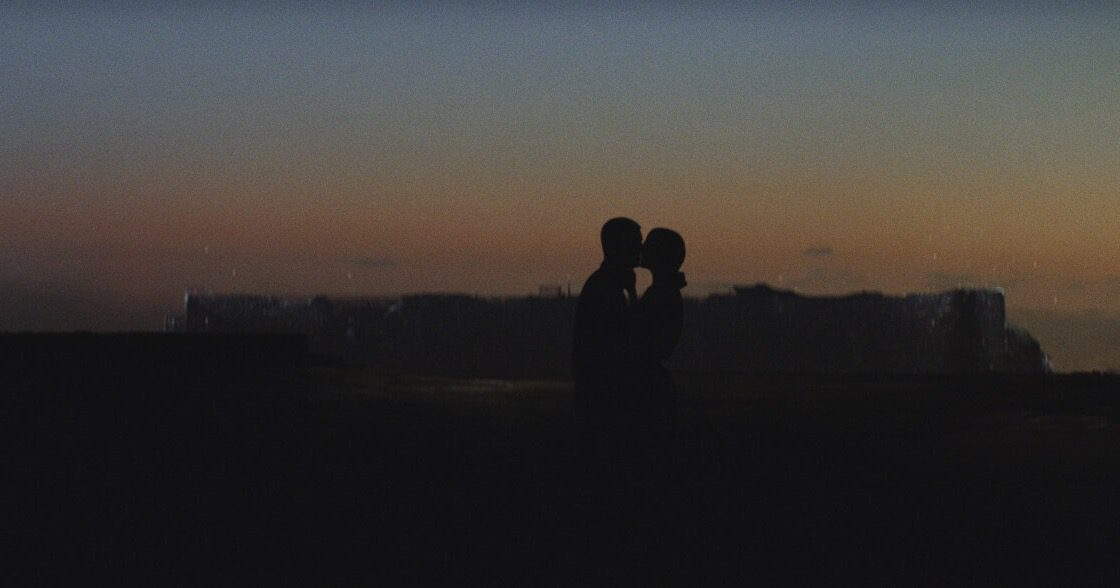 The Wanting Mare opens with text informing the audience that, in the city of Whithren on the world of Anmaere, citizens are desperate to travel to the wintry land of Levithen on the once-a-year ship that transports their main export, wild horses, across the sea. We are then witnesses to the last words of a new mother to her newborn daughter Moira, explaining that, “You’re gonna have a dream. And you’re gonna have it every night” We’re then moved forward to the now-adult Moira (Jordan Monaghan) and her lonely life in the oppressively hot and humid Whithren where she fills her time with an old 8-track player and wistful staring towards the sea from the forbidding and rocky coastline. The aforementioned dream (nightmare?) seems to be of a fiery past, possibly even of whatever catastrophe befell the world of Anmaere to leave it in the post-apocalyptic state it is in now.

When Moira discovers an injured man (Nicholas Ashe Bateman) who may have the ticket to escape Whithren, she takes him in and tends to his wounds, and as he recovers, their bond slowly grows…

…and Then It Gets Weird(ish)

On the one hand, I’m loath to reveal spoilers for any film. On the other, I’m not sure I can spoil the plot of The Wanting Mare. It’s not a straightforward narrative. It covers multiple time periods in Moira’s life without the individual episodes really getting closure, stories are moved between with the hazy details of a dreamscape. That’s not to say it dissolves into surrealism: there are stories with beginnings, middles, and endings here. Just not every part has all three. There is the story of Moira and the injured man’s burgeoning romance; the story of the older Moira (Christine Kellogg-Darrin) in Whithren, the story of Hadeon (Edmond Cofie), a hustler/gangster in the shantytown and his battles over the elusive tickets; the story of Eirah (Yasamin Keshktar), a young woman trying to hide the coveted horse she owns… Some of these stories overlap, some don’t. Some have a degree of closure, some pass like mist in the wind. It feels at times like someone recounting a portmanteau film they saw in a dream.

Unfortunately, there are parts that Nicholas Ashe Bateman is content to let meander in ways that become boring. This is a true auteur piece in that Ashe Bateman is the writer/director/actor/producer/effects supervisor/possible caterer and there’s a sense that while he has a clear idea in his head of the world Whithren and Levithen are in, he forgets the audience doesn’t. He spent over five years making The Wanting Mare, and his effects work in particular is incredible for the micro-budget he worked with. Whithren feels lived in, a place with a history. The atmosphere is humid, urban, and extremely vivid. Which, given it was almost entirely filmed in one warehouse in New Jersey with effects done on a laptop, is astounding.

The question raised by that however is, does that matter? If I bring you a steak, it doesn’t matter whether I personally raised the cow if I then serve it well done with ketchup on it. Likewise, all the viewer gets is what’s on screen. It doesn’t become more entertaining if it’s a labor of love. In a more just world maybe it would, but…

Ultimately, this is a very “Your mileage may vary” film. If you’re a fan of the more experimental, vague pieces like Upstream Color, The Wanting Mare will be well in your wheelhouse. It isn’t as loosely structured as that, but it does lean that way. With a little more focus on plot, it could be a companion piece to Blade Runner 2049, albeit one where Ryan Gosling spends a lot more time staring at the sea and a lot less time chasing replicants. The languorous pace works against the viewer enjoying this as a straight sci-fi film, but as an atmospheric piece, it has a lot to recommend. Really, it’s more of a tone poem at times than a film.

A Franchise in the Making?

Ashe Bateman certainly has plans for more films in the world of Anmaere (The icy shores of Levithen are only briefly seen). There is a base set up here for more stories, but there should be more of a human element in them to get audiences more engaged. It reportedly took five years to create the film and it’s no wonder that with that amount of time rendering the background stage, the drama to be played out on it may have been left on the back burner from time to time. With this level of abstraction, I’m not sure if there’s a large enough audience to generate enough money for sequels.

Thanks for reading, and listening! What are your thoughts on The Wanting Mare? Comment down below!

[…] pulpy, B-grade cinema, Sparke instead gets caught up in an attempt to create the next, big Aussie sci-fi epic. Because of this, a lot of the film is bogged down in monotonous sequences of traveling, fighting, […]

‘Jakob’s Wife’: ‘Til Undeath Do Us Part?