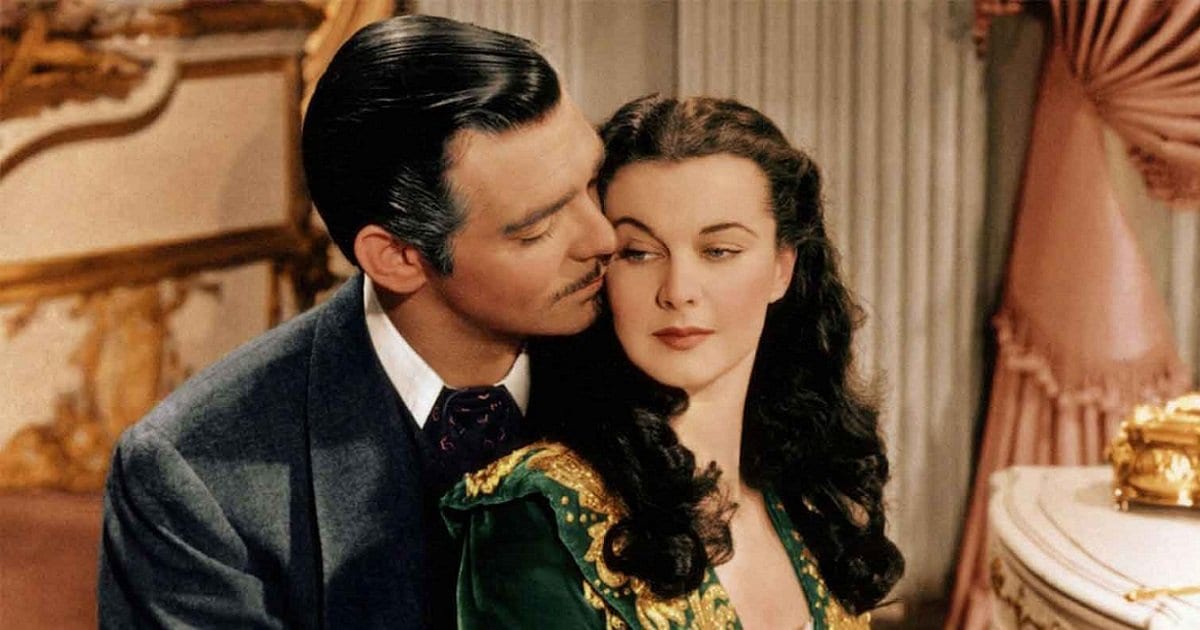 It seems like every movie nowadays makes it on to the list of top 10 highest grossing films. The oldest movie on the list is from 1997–James Cameron’s Titanic. After that, the oldest highest-grossing movie was made in 2009, coincidentally another Cameron vehicle — Avatar.

The reason that most of these high-grossing films have been made in the past ten years is because we often forget to make a simple calculation in these lists: inflation. With inflation, every few years new films will surpass old films, despite the fact that they may be selling the same amount of tickets — not necessarily generating more interest. It’s not surprising — the average movie ticket price is nearly $9, compared to 2012 when it was less than $8.

When we take the highest-grossing films of all-time and adjust them for inflation, only one was made after 2000. Number one on that list? Gone With The Wind — the glorious 1939 Civil War epic. It’s time to talk about the movie that practically created the blockbuster. 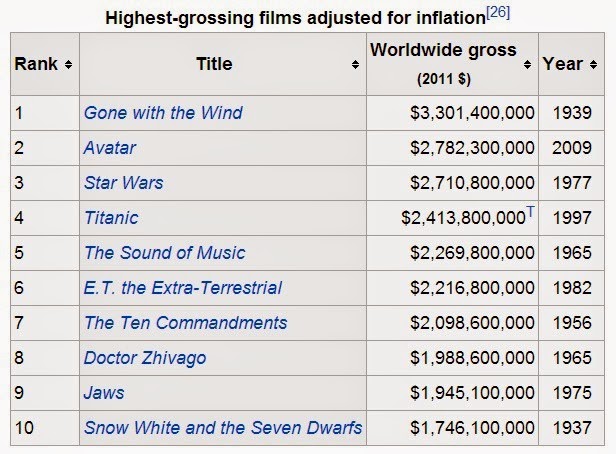 For those of you who haven’t had the joyous experience of viewing this piece of classic cinema, here’s a quick synopsis that will hopefully compel you to watch it: Scarlett O’Hara (Vivien Leigh), a fiery Southern belle from Georgia, is caught in the throes of the Civil War. She spends her days vying for the gallant Ashley Wilkes (Leslie Howard) to leave his frustratingly innocent wife, Melanie Wilkes (Olivia de Havilland) — whom O’Hara hates with a passion — and marry herself. A shrewd businesswoman, she embarks on questionable moneymaking ventures to make ends meet after her livelihood is stripped from her. At the same time, the rich and roguish Captain Rhett Butler (Clark Gable) scandalously tries to court her and help her eke out a living, despite the fact that her family and world are falling apart all around her.

Just reading the synopsis, you may be questioning how this movie ever made $3.3 billion (adjusted for inflation) in ticket sales. It’s not a particularly captivating plot, at least compared to other movies. Sure, it has some star power, but so did a lot of other movies at the time. And it’s not like Civil War movies are that exciting compared to others.

So, how did this movie make so much money? How did it win eight Academy Awards? Why is it still a beloved classic today?

Check that release year again. 1939. Take a minute and try to transport yourself back to that time. President Roosevelt was courageously guiding the United States through a devastating depression. Adolf Hitler was proving to be a dangerous man and the world closely watched his every move. Bread was 8 cents, gas was 10 cents a gallon. Movies were still in black and white and a ticket only cost 23 cents.

One blustery January day, you see a poster for a new movie: Gone With The Wind, starring your favorite actors — Clark Gable and Vivien Leigh. And, what’s this? It’s in color. No matter what it took, you were going to see that movie. After all, the only color you’d seen was in books, but never in moving pictures. This was a big moment in movie history. While there is debate over what the first color movie really was (The Wizard of Oz (1939) being a contender), any color movie at this time was exciting. It attracted flocks of people to the movies to see not only the story, but the vibrant colors it was told with–especially if that movie was almost four hours of technicolor magic.

Like I mentioned before, this movie came out near the tail end of the Depression. World War II would soon pull America out of its financial funk, but not quite yet. People were still out of work, down and out, struggling to make ends meet. Going to the movies seemed to be the only respite in a hard world.

Director Victor Fleming realized that and included a scene that stands out today as one of the most iconic in cinematic history.

In the context of the movie, Scarlett shouted those fateful words at the war and the terrible circumstances she’d been thrown into. But to the audience who’d just dragged themselves through the most challenging crisis of their lives, she yelled what they were telling themselves everyday. As God was their witness, they wouldn’t let the Depression beat them down.

Before GWTW was a blockbuster movie, it was a best-selling book by Margaret Mitchell. The 1936 novel was over 1000 pages long, giving those who were out of work and down on their luck something to occupy their time when they weren’t begging for food or vainly searching for jobs.

Image via Atlanta In Town Paper

It was so popular that it sold over a million copies in six months, even at the high price of $3 a book. This testified to the fact that people were absolutely desperate for some sort of relief from their worldly burdens; they were hungry for escapism in whatever form.

When the book became a movie, it only became more popular. Just like in today’s cinema, if a popular book becomes a movie, people are most likely going to attend the movies to see their favorite characters immortalized on the silver screen by star actors and actresses.

The biggest reason GWTW became the first blockbuster is because there really wasn’t much else in the way of entertainment at this time.

Today, when we want something to do on a Friday night, we can play video games with friends, stay in and watch Netflix with a significant other, go out and make videos of a crazy night out, or just stay in and watch YouTube videos all night. We have the technology to do anything we want right at our fingertips.

In 1939, your choices for Friday night were either listen to nightly radio programming, go to town and swing dance with your date, or go outside and play some sort of sport with friends — and two of those options got sketchy if it started to rain. The movies were the main source of entertainment for people. You went to the movies on the weekend so you could talk about the latest flicks with friends and see your favorite stars on screens — it was what everyone did. Because of that, ticket sales went through the roof when word got around of a good movie, like GWTW.

Image via Rhapsody in Books Weblog

We don’t do that today. Whether it’s because of rising ticket and concession prices (and the fact that my local theater doesn’t provide Junior Mints) or because streaming is more convenient, going to the theaters just isn’t a part of our culture anymore. Unless the movie is part of a superfranchise like Star Wars or the Marvel Universe, people would rather just wait until it came out on Netflix or DVD.

Image via The Edge

Don’t leave Gone With the Wind out of the conversation. Nowadays, it seems that the true highest-grossing movies are forgotten. Great films like The Ten Commandments (1956) and The Sound of Music (1965) are replaced with talk about Black Panther (2018) and Furious 7 (2015).

I’m not saying today’s movies are horrible or poorly made. On the contrary — I admire today’s special effects and story lines compared to classic films. However, I think it’s important that we never forget where the modern blockbuster came from. It’s important that we remember how far film has come and we always pay tribute to the stars and movies that have made Hollywood what it is today.

Thanks for reading! What are your thoughts on Gone With The Wind, highest-grossing films, and blockbuster movies? Comment down below!

[…] It drags quite a bit and everything is just so dramatic. It doesn’t have the same romantic lure as a classic Clark Gable film, nor does it have the slight comedic charm that Marilyn Monroe films […]

I must rewatch this cool classic. Read the book in high school. I show films at a senior center now and that would be a good choice. Penny thepennymasonpost.wordpress.com

Simply adore this film, she’s so headstrong and willful but she played the part perfectly!

I really love this movie!!! It surprised me finding out how good it was.

Great blog. Will always love GWTW. More of the older movies should be revisited – what they lacked in special form was more than made up by clever dialogue

Taking into consideration the inflation of the times when determining which movies are the greatest is totally legitimate and should always be part of the equation. My love for Black Panther aside, the inclusion of some of the greatest movies I’ve ever watched in you list is totally valid and should be there! Great read!!!

GWTW is one of my top 5 fave films of all time!

It’s definitely in my top 10 too! Which is why I get defensive when any movie tries to breach its long-standing record lol

Love Gone With The Wind, so well crafted. But I can’t stand Scarlett.

Yes, that’s the likable part of her personality.

This was interesting. So happy that you provided that list of top grossing films adjusted to inflation. It paints a much different picture.