‘Mr. Smith Goes to Washington’ and The Beauty of Inspirational Politics 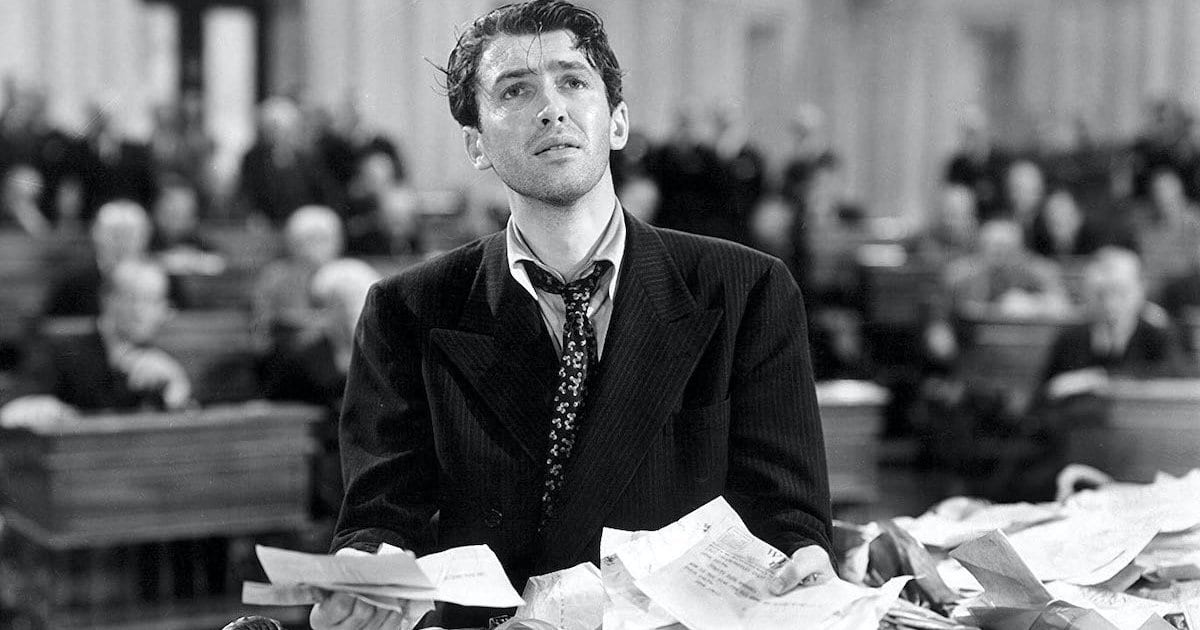 It’s been 80 years since my beloved Mr. Smith Goes to Washington (1939) was released, but its message still rings true: politics sucks. Unless, of course, James Stewart is your senator. Then everything is great!

But let’s get right down to the best part of Mr. Smith — Mr. Smith himself. Without a doubt, I would consider this to be James Stewart’s best performance. Yes, I am taking this over It’s a Wonderful Life (1946), Rear Window (1954), and Vertigo (1958). My opinion will probably change next week, but James Stewart really threw himself into the role of Jefferson Smith and I think we need to take some time to appreciate that.

Here’s to you, Senator Smith!

I could never imagine another person who would have the finesse to pull off this role. The key to Senator Smith is his lack of finesse. He’s not smooth like Clark Gable or gallant like Humphrey Bogart or alluring like Cary Grant. He’s awkward and innocent — a bright-eyed and bushy-tailed boy scout. There is one only actor in all of Hollywood who could pull that off at the time: James Stewart.

James Stewart was the kind of guy you could relate to. Hollywood hadn’t given him a big head. He was humble and charming, the kind of guy who you might bump into at your local supermarket and strike up a conversation with. If that didn’t endear you to him, he was also unfailingly loyal to his friends, family, and country. In 1941, he was actually drafted into the U.S. Armed Forces and earned the rank of Brigadier General.

This innocence and loyalty were what made him perfect for the role. You could actually imagine the humble actor traveling to Washington with a patriotic glint in his eye, hoping to make America better for the people. He would be the kind of man to care about kindness in politics and he would filibuster the Senate for nearly 24 hours just to clear his good name. The best thing about Jefferson Smith was that he was basically an exaggerated caricature of James Stewart himself.

Awkward Without Being Cringey

A lot of old movies tend to overdo it on the awkwardness scale. They seem to think that just because humans are awkward, that movies should overexaggerate that. A lot of Cary Grant movies are like that and it’s just uncomfortable to watch. But there’s something about Frank Capra’s Mr. Smith Goes to Washington and its awkwardness that feels less uncomfortable to watch…and even funnier.

For example, there’s a sequence where Jefferson Smith is talking to a beautiful woman and seems to forget how to hold his hat. He drops it at least three times in the scene. First of all, the cinematography of the scene is fun, as it zooms in on the hat rather than the characters speaking, letting us focus in on that awkwardness of courting and romance. Normally, this would be awkward for everyone watching, but something about the cinematography and the natural disarming manner of James Stewart that makes it work.

A Sweet Dynamic Between Lovers

Jean Arthur stars opposite James Stewart as Jefferson Smith’s cynical secretary, Clarissa Saunders. After a rough start, she eventually warms up to Senator Smith and helps him defeat the evils of politics. Of course, like in any old Hollywood film, the two also end up falling in love, though their romance is understated and takes a backseat to the main story of the film.

Yet, their dynamic does not take a backseat. It’s obvious from the very first moment that the two share the screen that Arthur and Stewart have tangible chemistry. They feed off each other’s dialogue well and there never seems a moment where the emotions feel stilted or contrived. The two characters/actors genuinely love each other and want to help each other.

This is most evident in the scene where Saunders helps Senator Smith draft his first bill. Senator Smith has no idea how to do it and Saunders ends up guiding him through most of it. While Saunders has a cynical view of politics and lets Senator Smith know that his bill is basically dead before he even writes it, Smith is annoyingly optimistic. The contrast between their personalities (not so much in their gender tropes: cynical female, optimistic male) is adorable and makes their relationship a joy to watch unfold.

I saved the best for last. The filibuster scene of Mr. Smith Goes to Washington is perhaps the best part of any early political movie. It clearly shows the workings of the Senate filibuster and it’s an example of how wild politics can get. Many shows and movies, like The West Wing, have tried to recreate the feel of this filibuster, but they haven’t ever outdone it. I don’t think anything gets me more fired up for my political science major than this filibuster right here.

The best thing about the filibuster is James Stewart’s passionate delivery. His raw, emotional filibuster is the reason why I feel this is his best role. His scratchy voice, his desperate tone, his disheveled appearance, the glint of hope in his eye — these were all little details that only Stewart could add. He was so dedicated to the role that he even coated his throat with mercuric chloride and bicarbonate of soda to dry out his throat and make his voice hoarse. That is another level of dedication right there.

Every time I hear Senator Smith’s hoarse voice advocating for the “little guy” and human decency, I am reminded of how powerful movies can be. Fun fact: Frank Capra got many letters telling him that Mr. Smith Goes to Washington is the reason they went into politics. Mr. Smith Goes to Washington is one of the more inspiring political films I’ve ever seen and I think that it is needed now more than ever.

So, go ahead. Treat yourself to a movie. And remember: politics doesn’t have to suck.

Thank you for reading! What are your thoughts on Mr. Smith Goes to Washington? Comment down below!

[…] in While You Were Sleeping and many other modern equivalents. Cary Grant, Katharine Hepburn, and James Stewart are such a powerful trio to see in […]

[…] to remain respectful. This virtue is understood by most children, but it seems lost in American political discourse. It’s disheartening seeing people cheer for a man who spews cruel things about […]

I was lucky enough to see this on the big screen a couple of years ago, and I fell in love with it all over again. Like you said, it has perfect casting, and a fabulous script.

I love it, too. So glad to see that cinematic legacy-in-black-and-white is still appreciated.

Black-and-white cinema is how I started my love affair with movies! I’ll always have a soft spot for them :)

‘Clueless’ Comes to Netflix: Why My Favorite Movie...