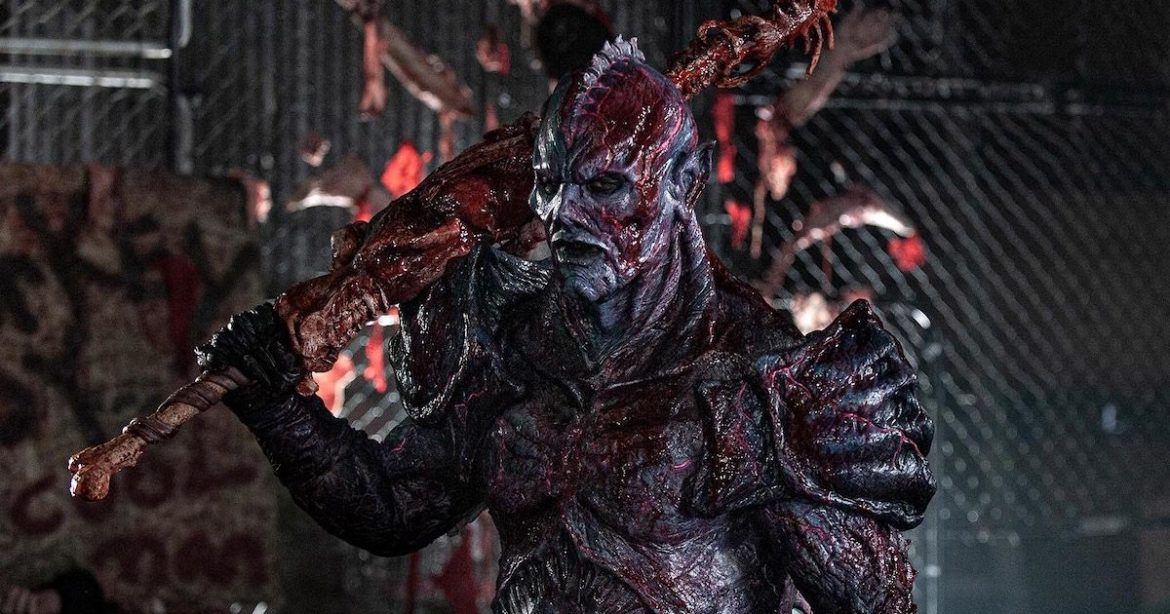 Sometime in 2020, I saw a trailer for a movie in which two kids had control of a galactic monster. It looked deliciously bonkers. There was extensive gore, people’s heads were torn off through their spines; it had people in rubber suits that made one think of the Power Rangers; the soundtrack emulated eighties’ Glam rock. A definite must-see.

Time moved on, and I forgot about it. And finally, the end of 2020 was upon us. Like most people, I was in the mood for some escapism. Having remembered the trailer, I thought the film would perfectly align with my genre desires.

Unfortunately for me, I had forgotten the title. It was surprisingly difficult finding out the title. Keywords such as “kids in control of monster” or “gore power ranger monsters” didn’t get me anywhere. But after some extensive research, I had finally found it: Psycho Goreman! Yay! Now I could get some sleep again…

Another unfortunate discovery came to pass: the film hadn’t even come out yet. Its VOD debut was slated for the 22nd of January, 2021. So I had to wait. Due to having spent so much time just looking for its existence, the film was unintentionally hyped up. It had to be as good and entertaining as the trailer or else I was going to be really, really annoyed and write a very negative review on MovieBabble — which we all know, is a filmmaker’s greatest nightmare.

The opening scroll of Psycho Goreman speaks about a nameless evil, a powerful intergalactic demigod, originating from a planet called Gigax. Before this powerful force destruction could fulfill his tyrannical desires, he was imprisoned by the Templars, a group of alien warriors. The Templars sentence him to a faraway planet, one curiously called ‘Earth.’

In the present, two sibling children, the domineering Mimi (Nita-Josee Hanna) and her submissive brother, Luke (Owen Myre), play a game called ‘crazyball’ — the rules of which are only understood by Mimi and Luke. Luke loses the game and as punishment, he needs to dig a grave for himself in the backyard. Beneath the ground, they find a colorful amulet and when Mimi takes this from the ground, she accidentally releases this evil demigod from his prison.

As per his nature, this Evil demigod immediately sets out to wreak apocalyptic havoc on Earth. But fortunately for the denizens of this planet, the colorful amulet in Mimi’s possession makes this intergalactic demigod subservient to her. When she realizes this, Mimi takes full advantage of it, using him as an object for her play and to make sure nobody can defy her wishes — even though most people, including her parents (Adam Brooks and Alexis Kara Hancey), already seem incapable of controlling this manic youngster.

After some debate, Mimi and Luke decide to name this demigod, “Psycho Goreman” (Matthew Ninaber, voiced by Steven Vlahos) or PG for short — though he prefers the name ‘Archduke of Nightmares’.

Meanwhile, far away in the galaxy, a group of intergalactic species became aware of PG’s recent prison break. Their top Templar agent, Pandora (Kristen MacCulloch, voiced by Anna Tierney), is on the case and travels to planet earth to destroy PG once and for all.

As a child, I couldn’t get enough of the rubbery madness of The Power Rangers. This nonsensical show featured a bunch of teenager superheroes donning colorful tights (not that much different than most superheroes now that I think of it), fighting intergalactic monsters (also people in ridiculously inventive rubber suits). It was absolutely bonkers and though it hasn’t aged well, it still retains some nostalgic value for those who were really into it.

Originating from a Japanese metaseries known as Super Sentai, and then adapted to the American Market through Saban (they would retain the action scenes, dubbing them with American voices and film extra scenes with the American cast). I won’t go too far into it, considering its lengthy history, but needless to say, if you were (or still are) into this specific series, Psycho Goreman is a must-see.

The same goes for if you happen to be a fan of Toho, such as their classic Godzilla franchise. If you also happen to love the work of practical special effects wizard Screaming Mad George (known mostly for his disgustingly memorable work with Brain Yuzna, most notably with the film Society), you will get kick out of this film too.

Writer/director Steven Kostanski — someone with a history of nostalgic genre fare such as the excellent The Void and the decent Leprechaun sequel, Leprechaun Returns — obviously has an affinity for rubber monster madness. Don’t expect any CGI monsters here, this is all latex and rubber. There’s even a little stop-motion! Any digital effects are used sparingly, mostly to enhance the cosmic powers of the cast of intergalactic weirdos.

The only drawback from its practical effects work is that some of the mouths of the rubber-suited performers aren’t entirely in sync with their dialogue. But this can be easily overlooked. I would prefer these little imperfections to another overblown CGI monster fest.

What surprised me most about Psycho Goreman is how absolutely hilarious it is. Sure, I expected a comedy, but it’s been a long time since I laughed this much. At times the film reminds me of the rebellious Troma fare, especially with its copious use of gore, but it’s not as meanspirited or lowbrow. The humor mostly comes from the humorous interplay of the characters, especially with the deathly serious PG conversing with the childish perspective of Mimi. There’s a lot of fish-out-of-water humor too, with PG having to get accustomed to the ways of humanity, even learning about this human emotion called ‘love’.

A special mention must also go to Adam Brooks, playing the father of Mimi and Luke. His uninvolved attitude to parenting, and his seeming obliviousness to his wife’s needs, brings forth a lot of laughter.

Don’t let my previous mention of copious gore turn you off. It’s a surprisingly mild film in that department. Even if the retro aspects of PG don’t attract you, give this film a watch for its comedic value.

A Touch of Amblin

At times, Psycho Goreman also reminded me of eighties family movies — with just a little more gore. It reminded me of films like Poltergeist, Gremlins, or The Goonies: not too dark, yet not too sweet either. Films that obviously could not get a PG rating now. It’s intense, yet comforting. There’s an edge to the proceeding, even if it’s family entertainment.

Granted, the film is aiming for comedy rather than horror. When the film tries to pull your heartstrings by the end, it’s played mostly for laughs. Even so, there’s a heartfelt quality to it. It never feels manipulative. There’s a sincere quality to it that J.J. Abrams’ Super 8, which also tried to emulate this Amblin feel, was lacking.

Even with its retro qualities, it’s also just trying to tell its own story. It’s not like Stranger Things, constantly bombarding you with nostalgic winks of eighties glory.

Dominating every scene is Nita-Josee Hanna, playing the precocious, smart-alecky, slightly sociopathic Mimi. It’s a performance brimming with manic confidence. It’s obvious that in the field of comedic performers, Hanna is one to watch out for.

Her performance notwithstanding, her character is also the most interesting of the bunch. Mimi refuses to down to any kind of authority, whether it be parental or Godlike, Mimi just wants to do what she wants. The world is her playground and it must adhere to her needs. There’s even an occasional sadistic quality to her character. The way she treats her brother can seem especially cruel — which PG tries to manipulate, so he can take the gem from her hands and be free from her hyperactive madness. Luckily there’s a heartfelt arc to her character that stops her character from becoming a mean-spirited joke.

It boggles my mind that some claim her performance to be annoying. To me, she is the best part of this delightful movie. There are so many little nuances to her performance that are both endearing and hilarious.

Probably my favorite moment comes during Mimi’s musical performance (she sings a narcissistically gleeful song called “I’m the Hecking Best”). PG, who’s behind the drums for some reason, is too early with his musical cue and Mimi’s annoyed expression towards him might be the funniest moment in the film.

Psycho Goreman is a hilarious amalgamation of genre fare. We have some Super Sentai/Toho, mixed in with Troma, and just a dash of Amblin to boot. It’s a must-see for genre lovers or anyone who aches to see performers covered in prosthetics and rubber suits — or just anyone who wants to have a good laugh. To my mind, it has already cemented itself as one of the funniest films of the year.

It might even be (yes, I’m going there), the “hecking” best.

Thank you for reading! What are your thoughts on Psycho Goreman? Comment below!

'Guillermo del Toro's Cabinet of Curiosities: The Murmuring' - A Spooky Story About Birdwatching... - MovieBabble November 9, 2022 - 10:11 am

[…] an entirely different affair than the previous episodes. There are no monsters. No gore. It’s essentially a slow-paced relationship drama with horror elements. This might even be […]

[…] so far, but it’s one that makes you understand why del Toro took an interest in him, the 2020 future cult classic, The Empty Man. It’s a flawed but highly ambitious film, that deals with cosmic horror in a […]

[…] shouldn’t take long for audiences to realize they are viewing the birth of a cult classic when they watch Sion Sono’s latest film Prisoners of the Ghostland, which sees him pairing with […]